Two New Hawkeye Clips: Does the Show Have a ‘Hunger Games’ Vibe? 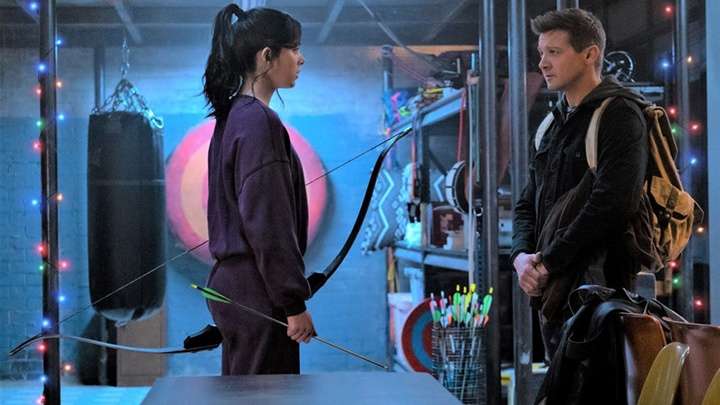 To go along with the Disney+ Day event, Jeremy Renner popped up on Good Morning America to show and exclusive clip from the upcoming Hawkeye series, and it’s one we haven’t seen before. Here Clint Barton is walking with Kate Bishop as played by Hailee Steinfeld when a mother says to her child, “Look, honey, superheroes. Do you want your picture with them?” Clint turns assuming its him when they kid runs past and over to a group of cosplayers posing that included Hulk, Antman, Spider-Man, Thor, Captain America and Iron Man along with a woman with a bow.

When Kate points out that she’s Hawkeye, Clint corrects her that the character is Katniss Everdeen from the Hunger Games. Which leads Kate to tell Clint that his problem is branding. It’s a good clip I that Clint then recaps the series, that people are trying to kill Kate because she decided to wear the Ronin suit and the he’s trying to solve the problem so he can go home to his family for Christmas.

The Flash Film Suddenly Bumped Up; What’s Going on Here?