Netflix announced the Karate Kid based series Cobra Kai was renewed for a sixth season. However, this will be the final season for the fan favorite series Executive producers Josh Heald, Jon Hurwitz and Hayden Schlossberg sent out the following letter regarding the announcement: 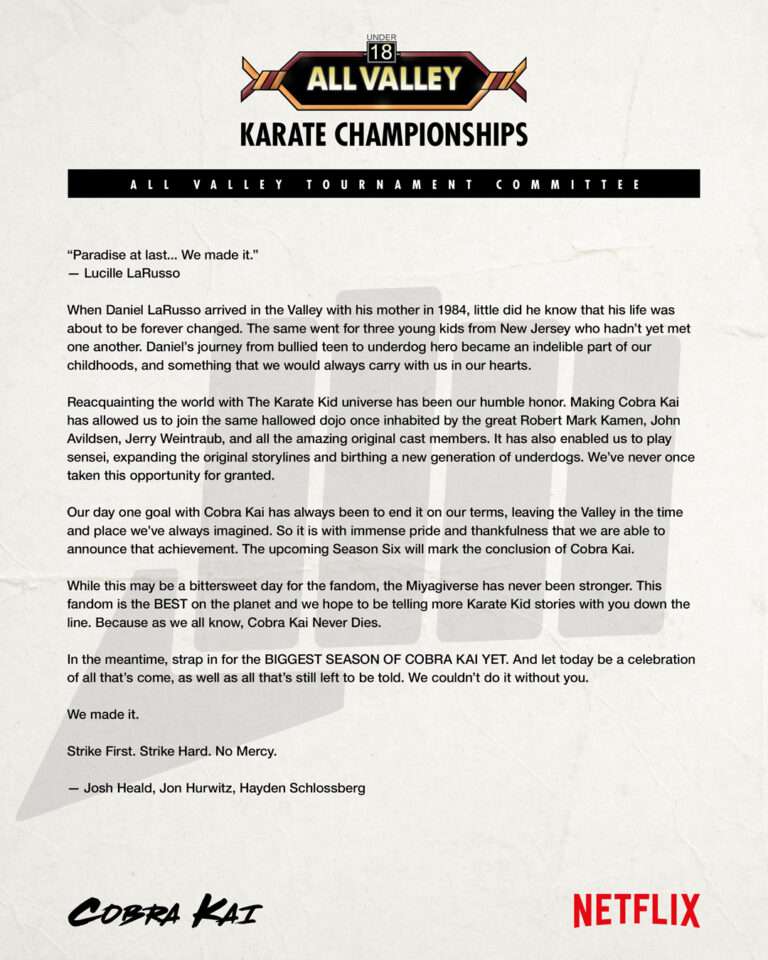 “Reacquainting the world with ‘The Karate Kid’ universe has been our humble honor. Making ‘Cobra Kai’ has allowed us to join the same hallowed dojo once inhabited by the great Robert Mark Kamen, John Avildsen, Jerry Weintraub, and all the amazing original cast members. It has also enabled us to play sensei, expanding the original storylines and birthing a new generation of underdogs. We’ve never once taken this opportunity for granted,” said Josh Heald, Jon Hurwitz and Hayden Schlossberg in a written statement.

“Our day one goal with ‘Cobra Kai’ has always been to end it on our terms, leaving the Valley in the time and place we’ve always imagined. So it is with immense pride and thankfulness that we are able to announce that achievement,” the note continues. “The upcoming Season Six will mark the conclusion of ‘Cobra Kai’. While this may be a bittersweet day for the fandom, the Miyagiverse has never been stronger.

“This fandom is the BEST on the planet and we hope to be telling more ‘Karate Kid’ stories with you down the line. Because as we all know, Cobra Kai Never Dies.

And to think that this hit show originated with an idea inspired by a spoof trailer by J. Matthew Turner that took YouTube by storm seven years ago, which may have been inspired by a scene in “How I Met Your Mother”.

Whatever inspired the series, it was nice to see Turner (sort of) get credit in Season 3 of Cobra Kai when a guy yelled out to Daniel: “I heard YOU were the real bully!”

Are you a Cobra Kai fan?