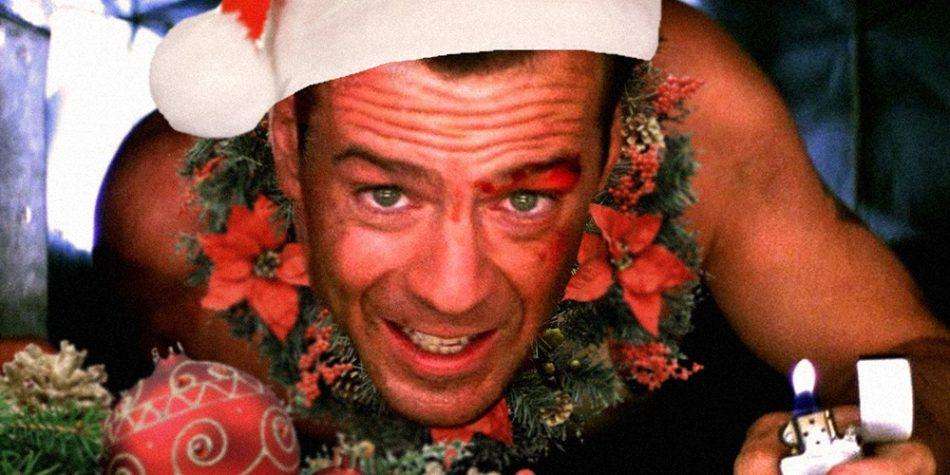 There seems to be a growing amount of discussions, and outright arguments, over the superior Christmas action m`ovie. We’re not going to settle that today (it’s obviously 2020’s ‘Fatman’). However, as enjoyable as Christmas movies are, it’s fair that not everyone wants to watch It’s a Wonderful Life every year during the holidays. Even less reverent and more modern films like National Lampoon’s Christmas Vacation and Elf can be too much Yuletide gayness for some.

It’s sometimes just as enjoyable to experience the holidays in the background of a movie. You’re not alone if the prospect of seeing another Hallmark Christmas film makes you want to hide under the covers till the New Year. Those audiences are in luck; there are a slew of excellent films that have a Christmas vibe to them without being solely about the holiday. In fact, here’s a list of 6 action-packed Christmas-time movies to keep you entertained while staying in the spirit of the season.

Here’s my the top 7 countdown of recommendations:

Rocky Balboa now lives in a big house and even has his own personal robot. And yet, he finds the soft-life unsatisfying. So, rather than being about an average Joe with a dream, this time it’s rich man’s blues. Before long, the opportunity arises for Rocky to help out with an exhibition fight between his old pal Apollo Creed and Dolph Lundgren‘s Ivan Drago. That doesn’t go well, and this gives Rocky the motivation to fight Drago on Christmas Day.  The series always plays the card of populism, and this time, it’s Rocky vs. the Russians. Always worth a re-watch for the holidays.

Directed by Shane Black The Long Kiss Goodnight follows the story of Samantha Caine (Geena Davis) a suburban schoolteacher with amnesia enjoying the holiday season with her family. Early on in the film Samantha starts having vivid memories of her past life that unearth the truth of who she used to be… a ruthless government assassin. After a stranger tries to assassinate her in her own home one snowy night, Samantha hires private investigator Mitch Hennessey (Samuel L Jackson) to help her look into her past. The beginning of the movie feels so much like your traditional Christmas classic, you almost forget you are watching an action movie. At least until we find out Samantha’s true identity which brings snowy action sequences, gunfights on ice skates, and explosions galore.

Shane Black also directs Kiss Kiss Bang Bang a film-noir parody set around the holidays in Los Angeles. In the opening sequence we see protagonist Harry Lockhart (Robert Downey Jr) a petty thief robbing a toy store to “buy” Christmas Gifts. The robbery goes awry and his partner ends up dead while Harry tries to elude police. During his escape Harry accidentally stumbles into an audition. Still emotional from the death of his partner, Harry lands the role and is sent to L.A. for a screentest. Upon his arrival Harry teams up with his high school crush Harmony Lane (Michelle Monahan) and headstrong Private Investigator Perry Van Shrike (Val Kilmer) to solve a mysterious murder. The movie successfully sells the Christmas spirit (despite it being set in L.A.) through subsequent holiday parties and Christmas references.

Iron Man 3 fits into the Marvel universe timeline shortly after the first Avengers movie, and Tony Stark (Robert Downey Jr.) is struggling with Post Traumatic Stress Disorder from the events that occurred in New York. Sleepless and troubled Tony buries himself in his work, and begins feeling isolated from his loved ones (a common Christmas movie theme). Eventually Tony is confronted with a new terrorist the Mandarin (Ben Kingsley) and as a result is forced to be reliant on his friends and family.

The plot would have worked at any time of year however director Shane Black obviously has a soft spot for Christmas, with this being his third film in my list of Christmas action films. In Tara Bennett and Paul Terry’s The Story of Marvel Studios: The Making of the Marvel Cinematic Universe Black stated “Christmas bands together and cements a story. You feel like there’s a common unity among all the people in it. It’s just something [audiences] constantly notice in the background. It represents a flavor, and there is a sense that ‘We are all in it together.'”

Batman Returns is an action-packed sequel to Tim Burton’s Batman. The movie introduces two new villains, Catwoman (Michelle Pfeifer) and The Penguin (Danny Devito), and follows their interactions with the caped crusader. The Penguin and Catwoman team up to try and rid Gotham of Batman once and for all. The plot thickens when sparks fly between Bruce Wayne (Batman as played by Michael Keaton) and Selena Kyle (Catwoman). The two discover each others alter ego’s while dancing under the mistletoe. While the plot itself has little to do with Christmas the movie imbues festive feelings through the wintery Gotham setting, extravagant holiday parties and even a rockafeller center style Christmas tree lit up in the middle of Gotham City.

Lethal Weapon directed by Richard Donner is considered by many to be the original Christmas action movie, actually preceding Die Hard. Mel Gibson and Danny Glover have excellent chemistry in the veteran action movie playing Martin Riggs, and Roger Murtaugh respectively. Lethal Weapon follows Murtaugh and Riggs as they assist internal affairs in uncovering a black-market arms operation, involving dirty cop Jack Travis (Stuart Wilson). Die Hard may be considered the classic Christmas action Movie, but Lethal Weapon did it first and some would argue did it better. Riggs character is struggling with the loss of his wife around the holidays, and finds the gift of a true friend in his partner Murtaugh. Ultimately, the movie spawned a handful of sequels.

At number one is the first installment of the popular Die Hard franchise, which tells the story of John McClane (Bruce Willis), a rebellious New York Cop who arrives in Los Angeles on Christmas Eve to spend the holidays with his estranged wife Holly Gennero (Bonnie Bedalia). The opening scene in the limo en route from the airport is set to the tune of Run DMC’s “Christmas in Hollis.” John finally reaches his destination, Holly’s holiday party at Nakatomi Plaza.

Shortly thereafter the party is crashed by German terrorists lead by the infamous Hans Gruber (Alan Rickman). While the LAPD handle the situation from the ground, John attempts to neutralize the threat from within. Following an altercation with one of the terrorists on another floor, McClane sends a touching holiday message to Hans “Now I have a machine Gun. Ho Ho Ho”. While not specifically about Christmas, Die Hard certainly touches on a common Holiday movie trope, reuniting with family during the Christmas season.

If you think you’ll like “Fatman”—in which Mel Gibson stars as Santa Claus facing down a hitman—you’ll like “Fatman.” And if you aren’t so sure, you still might like it. Based on the premise, the trailer, and the R rating for violence and language, I expected a holiday shoot-‘em-up of the standard hour-and-a-half of quips, gunplay, and high explosive hijinks.

Instead, Fatman’s writer and director duo of Ian and Eshom Nelms took their time in getting to the action, developing the characters, and offering bits of humor and heart along the way, including some genuine laugh-out-loud moments. The ridiculous premise works as more than a gag because they put real people inside of it.

Last year’s poll came up with a different countdown. What are your favorite Christmastime action films?