Many of us are eagerly awaiting the upcoming Black Widow film that is finally due out on July 9th. One of the stars of the film is David Harbour, the Stranger Things and Hellboy actor is cast as Alexei Shostakov, a father figure for Natasha Romanoff and the costumed hero Red Guardian. The character was created by Roy Thomas and John Buscema to be the Soviet Union version of Captain America during the Cold War. 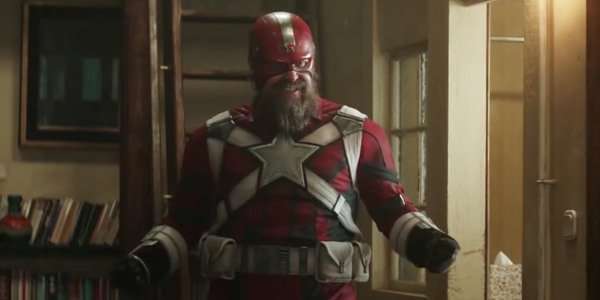 During a recent press conference for the movie, Harbour was asked if he like to see a Cap v Guardian story, to which he replied: “What’s funny about Alexei, you have this 25-year gap we don’t know about (in the movie). We see him in Ohio and in the prison. And even before the prison, there was a time when he was the Red Guardian, he must have put the suit back on. There is this period of time where he has all these stories about his life. It’s questionable whether or not they’re real. I do think the classic Cold War thing is a really fun and funny dynamic between these two guys and the fact that they came up like nuclear warheads like in an arms-race together. I think it’s a great concept that could be explored further.”

He then joked, “Is Kevin Feige in the room, did he hear?” Feige was indeed on the zoom call with Harbor.