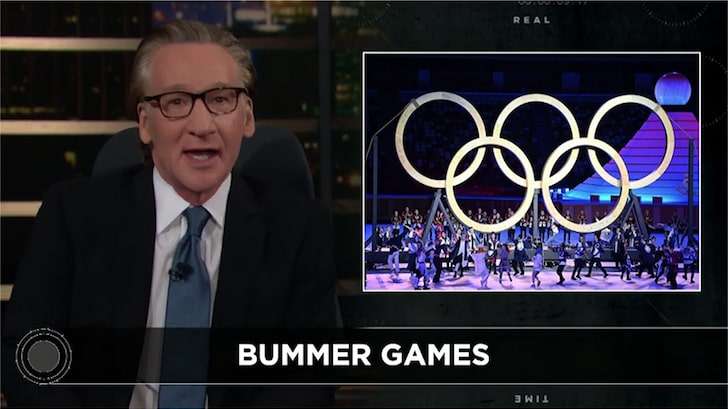 On Friday night’s episode of HBO’s “Real Time,” host Bill Maher reacted to the firings of Olympic officials for their previous words and conduct by calling it a “purge… a mentality that belongs in Stalin’s Russia.”

How bad does this atmosphere we’re living in have to get before the people who say cancel culture is overblown admit that it is in fact an insanity that is swallowing up the world? #WokeOlympics pic.twitter.com/P9rJNs6nrs

“This is called a purge. It’s a mentality that belongs in Stalin’s Russia. How bad does this atmosphere we are living in have to get before the people who say cancel culture is overblown admit that it is in fact an insanity that is swallowing up the world? … And that is not a conservative position, my friends. My politics have not changed. But I am reacting to politics that have, and this is yet another example of how the woke invert the very thing that used to make liberals liberals. Snitches and bitches, that’s not being liberal.”

“This new idea that each culture must remain in its own separate silo is not better, and it’s not progress. And in fact, it’s messing with one of the few ideas that still really does make this melting pot called America great. … And that’s the great thing about cultural mixing, it makes things better for everyone. BTS can be a hit in America and I can get kimchi on a taco, isn’t that better than everyone walling itself off from outsiders? I thought walls were supposed to be bad. But we’re living now in a world where straight actors are told they can’t play gay roles and white novelists aren’t allowed to imagine what it would be like to be a Mexican immigrant, even though trying to inhabit the life of someone else is almost the very definition of empathy, the bedrock of liberalism.”

Modern Cartoons Can't Be Trusted: Here's the Best 80’s Toons for Kids
Conan O'Brien Sidekick Andy Richter Praises 'Cancel Culture'
Shock Cancellation: Netflix Pulls the Plug on 'Westworld'
Alan Moore Disowns Much of His Past Work; Disillusioned with Hollywood Adaptations
'House of the Dragon' Scores Biggest HBO Season Finale Since 'Game of Thrones'
More on the Online Leak of HBO's 'House of the Dragon' Finale
DC Comics is Likely Facing Another Round of Layoffs Today