Yes, I am still watching it.

Batwoman 1x05 Promo "Mine Is a Long and Sad Tale"

And despite what some of my peers may tell you, Batwoman, Episode 5 “Mine is a Long and Sad Tale” was a significant improvement for the series and offered a glimmer of hope that the show may find some footing. The show has continued to hemorrhage viewers, but media outlets are predicting that it will get picked up for a second season as part of The CW’s commitment to launching the new shows.

Rachel Skarsten portrays the villain, Alice, who is, so far, the shows strongest character. It is a sad commentary on why the show tends to flounder the Ruby Rose’ portrays Batwoman with such a stunted emotional range. The flat portrayal of the main character combined with the woke Feminist snippets about “batsplaining” and “not letting a man take credit for a woman’s work” have drown past episodes in cringe only exacerbated by a bland supporting cast and lackluster action scenes.

This episode, however, features the Alice character heavily. We learn the tragic backstory that caused Kate’s sister Beth to go “down, down, down the rabbit hole” to become the villain, Alice. Rachal Skarsten renders a compelling performance and a child actress, Ava Sleeth, shows us the dark and terrible things that happened to Young Beth after that car wreck we saw back in the pilot episode. 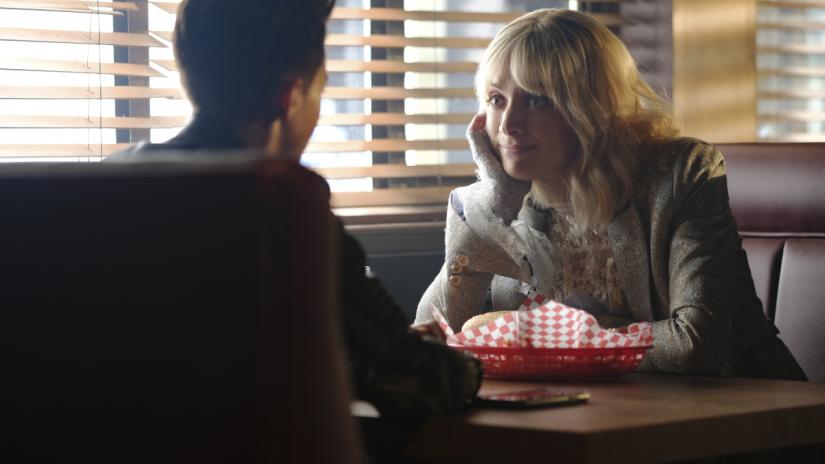 Unfortunately, for all the human connection, Alice’s motivation as a villain still doesn’t make sense. She seeks revenge for being abandoned by her father, but, as this episode showcases, Colonel Jacob Kane (played by Dougray Scott) did all that was humanly possible to recover his lost dauhgther, including tracing a call to the exact house where she was being held.

Mr. Kane barges into the house to find his daughter with young Kate in tow (probably not the best decision). Unfortunately, Beth’s kidnapper has told her that if she cries for help, she will kill her father and sister. So she choses to remain silent as her father and sister give up the search.

The scene makes for great drama, but it shatters the villain’s motivation. How can she harbor such rage at her father and sister who did all they could? The show gives the cop out that Beth/Alice was hoping for some psychic connection to be felt, but that’s lame. We, as the audience, are left with a well portrayed villain with a horrible motivation that ultimately renders her un-relatable.

And that unreliability should drive Kate/Batwoman to put Alice behind bars so that she might get the help she needs. Instead, Kate continues to allow her sister to manipulate her into remaining free despite her being a mass murderer who stabs their father in this episode and is hatching a sinister plot for Gotham.

Ms. Skarsten’s strong performance cannot make up for the poor writing as the series continues to flail about. Still, for a few minutes, this episode was quite engaging. It has potential if the writing can be addressed and they pivot the Kane/Batwoman character away from a stoic, Feminist who makes poor decisions into someone who we would actually want out there protecting us in the night.

The CW's Powerpuff Girls Live-Action Reboot Isn't Dead Yet
The CW Cancels 'Batwoman' & 'DC's Legends of Tomorrow'
Casper Live-Action Series in Development at Peacock
'Gotham Knights' Continues Trend of Erasing Redheads in Pop Culture
Will HBO Max Be Taking Over The CW’s Arrowverse Shows?
In Spite of Pending Sale, The CW Orders 'Gotham Knights' Pilot
Who is Asking for a Gender-Swapped Zorro or 'Robyn Hood'?