There’s something about a reboot/remake/revival that either raises the hackles on me, or takes me back to my youthful days of hope, dreams, aspirations and courageous ambition…alright, I’ll level, my youthful days consisted largely of consuming copious amounts of Doritos, and Miller Highlife.

So it was with my first encounter with Bastard!! the 6 episode OVA (1992-1993, Pioneer Entertainment), covering a fraction of the content from the 27 volume manga by Kazushi Hagiwara that ran from 1988 to 2010 (Published by Shueisha in Japan, Viz Media stateside).

At a party consuming beer, and shooting martinis to piss off my 18 year old peers who were also too young to be drinking, I found myself watching an action packed, lurid piece of animation that was Bastard!! A post apocalyptic dark fantasy that seems like it was born from the pages of Heavy Metal or Metal Hurlant.

The main character, Dark Schneider (name inspired by Udo Dirkschneider from German metal band Accept), a nigh immortal wizard, who, happens to come close to destruction at the end of a wandering campaign in the ‘Great War’ when he lays siege to the kingdom of Metallicana (a reference to Metallica, duh!). Escaping death by resurrecting himself through magic, Dark Schneider’s spirit is instead encased, and sealed into a reincarnated form, a boy named Lushe, by Metallicana’s number 1 priest, Geo Noto Soto (likely a reference to Jeff Scott Soto of the hard rock band Talisman), containing Schneider’s evil personality under an innocent influence.

15 years later, and Metallicana finds itself under siege once more, this time by the Four Lords of Havoc, old colleagues of Dark Schneider continuing his work, but with a twist. Instead of just simple world domination, they’re out to remake the world by reviving an ancient deity, Anthrasax (an allusion to the band Anthrax) God(dess?) of Destruction.

Metallicana’s back against the wall, Soto plays the one trump card he has. 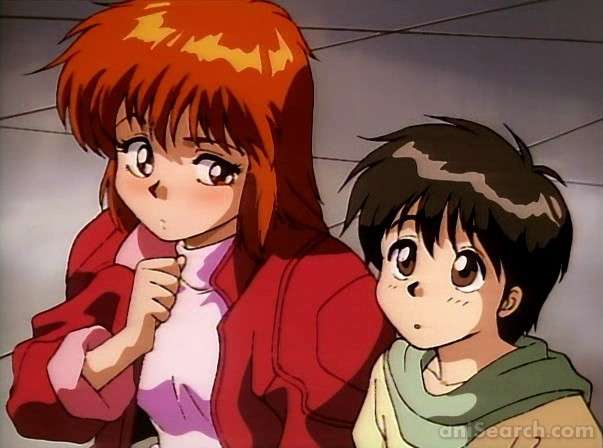 Having his daughter Yoko (voiced aptly be Wendee Lee in the dub) awaken Dark Schneider’s spirit from within Lushe by breaking the magic seal with a virgin’s kiss, Lushe is transformed into the powerful Dark Schneider, who, reluctantly decides to defend Metallicana, largely because of a fondness for Yoko. The Four Lords of Havoc believing the powerful wizard had died in the prior siege are caught off guard when Dark Schneider miraculously returns, wiping out one of their powerful underlings leading the attack on the kingdom.

This was wild content for 16-17 year old me drunk off of Goldschlager and Jägermeister, but my alcohol abuse aside, the moment was an ‘aha’ one for me. Having long grown out of the Pokemon craze at this point, Bastard!! revealed a broader view of what the anime medium still had to offer; it wasn’t all giant robots, monsters in balls, and magical girls falling for men in domino masks. Anime could unabashedly rock like a hair metal band, spread gore like Conan The Barbarian, and bare more knockers than a Frank Frazetta illustration. Coming back to the above statement about reboots/revivals/remakes, almost 30 years removed from the OVA, a new Bastard!! ONA will debut on Netflix June 30th.

Always leery of such things, I have to admit that the trailer looks promising, Liden Films (Berserk – 2016 series) being a prolific studio, and Japan tending to have a better track record in redoing old successes.  And if anyone has a chance at making a comeback, it is indeed Dark Schneider!

Here’s hoping it’s every bit as ballsy, and fun as its predecessor.

Time (being what it is) will tell for sure.