Anime Acquisitions: The Devil Is a Part-Timer! (2013- Present) – Hell’s Kitchen

This past weekend was exciting for fans of a specific series. That series being ‘The Devil Is a Part-Timer!’ and a season 2 trailer dropped that was worth rejoicing over:

Originally a light novel series by Satoshi Wagahara, amounting to 27 volumes as of 2020, 16 of which available in English, a manga adaptation by Akio Hiiragi began in 2012 (Yen Press the publisher for both Stateside), and a rather popular anime treatment by Silverlink in 2013 amounting to 13 episodes, brought to the Stars n’ Bars by Funimation 2014.

The Devil is a Part-Timer! – Opening Theme – ZERO!!

The premise being something of a reverse of CS Lewis’ ‘The Lion, The Witch, and The Wardrobe’, this entry in the isekai genre has the characters of another world blundering into ours.

Ente Isla is at war, Satan (their version of it, anyway) and his hordes of monsters led by four demon generals have attacked the world in a bid to take it over, but heroes rise to the occasion and repel him back to his strong hold, where, The Hero Emelia (a half angel) and her allies defeat Satan and his forces decisively in a final battle.

The Devil is a Part-Timer! - Coming Soon - Trailer

Satan retreats with his right hand man (er, Demon) Alciel through a portal that just so happens to posit them on present day Earth in Tokyo, Japan. Because devils and monsters don’t typically exist in the natural world, they materialize as humans, and find that they do not possess much, if any, of their vast magical powers from before, only having enough magic to help them fabricate new identities for themselves.

Now going by Sadao Mao, and Alciel as Ashiya, Satan gets employed at McRonald’s (a fast food joint a la McDonald’s) as a part time employee, and excels quickly due to his past experience as Ente Isla’s Dark Lord, having excellent leadership, confidence, and strangely, people skills, even garnering the affections of a high-school girl in Chiho (see clip below).

One rainy day, he encounters a redhead that turns out to be his old foe, The Hero Emelia! She had chased after him, going through the portal as well! Now going by Emi Usa, and working at a customer service call center, she stalks him, and they quarrel, but find themselves both to be humorously average.

As the series progresses, other parties from Ente Isla come to Earth looking for either Satan or Emelia, and most often for reasons not so friendly!  The cast finds ways of gaining some of their vast powers back long enough to clash in over the top battles on Earth, with enough magic left over to pick-up after themselves when they’re done, but each conflict ends with everyone back to clay feet and punching the time clock at their jobs. 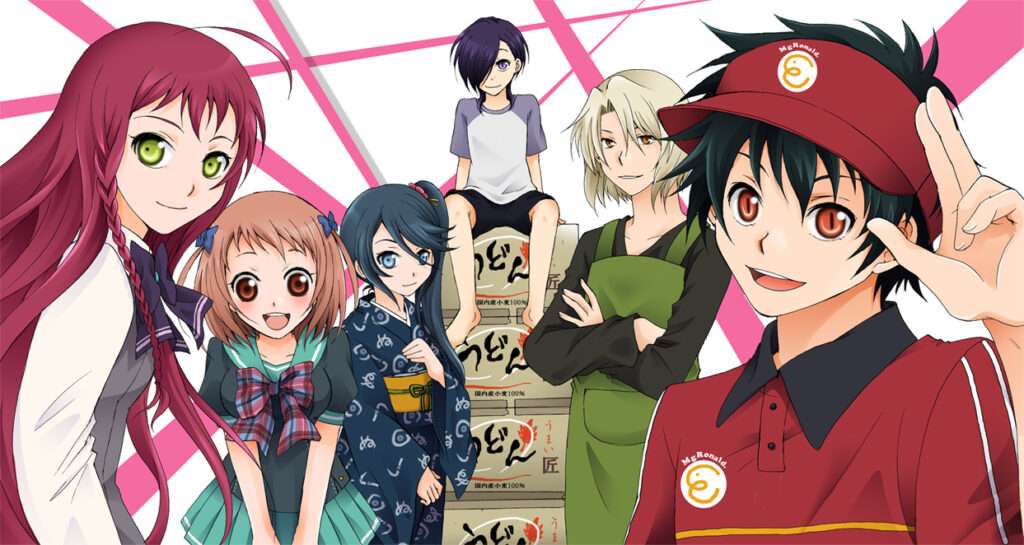 A great mix of comedy, and action that’s beautifully balanced, much of the joy derived from the 13 episodes is seeing epic, and powerful characters turned into something grounded, and vulnerable, then seeing how those characters handle it.

Satan and Emelia acclimatize well enough, coming across as largely normal people while newcomers in Crestia Bell, an inquisitor of The Church of Ente Isla, and Lucifer, one of Satan’s generals ( both later known as Suzuno, and Urushihara respectively), have persistent struggles related to advanced technology, such as computers and electronics; Crestia is often overwhelmed by them, while Lucifer is addicted to the internet, and video games.

The fish out of water aspect of the series is oddly reminiscent of the sitcom ‘Third Rock From The Sun’, where a crew of aliens disguise themselves as a human family, and try to blend in with modern society to learn about human nature. 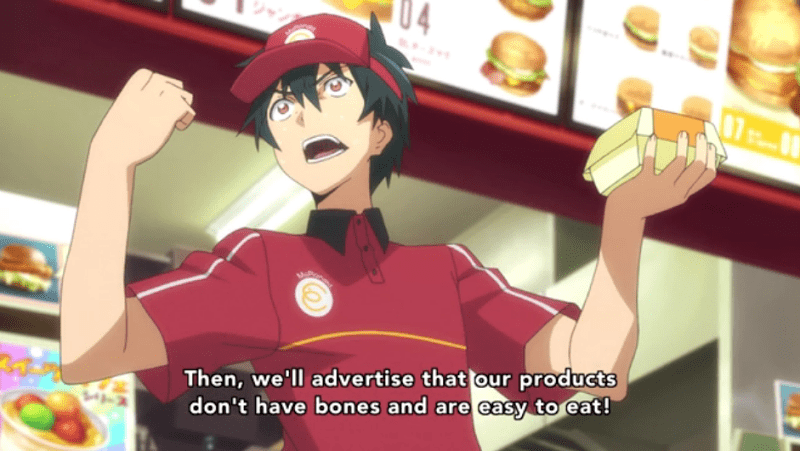 While the cast of ‘The Devil Is a Part-Timer!’ aren’t explorers in the same sense as ‘The Solomons’ were, they are exploring the human experience like them. Larger than life characters brought down to the humbler life-size, made eye level with the everyday mundane, and how difficult it all can actually be.

Fighting a war in a high fantasy setting is Hell (no pun intended), but fitting into the social machinery, and making the rent in the contemporary world can be too! 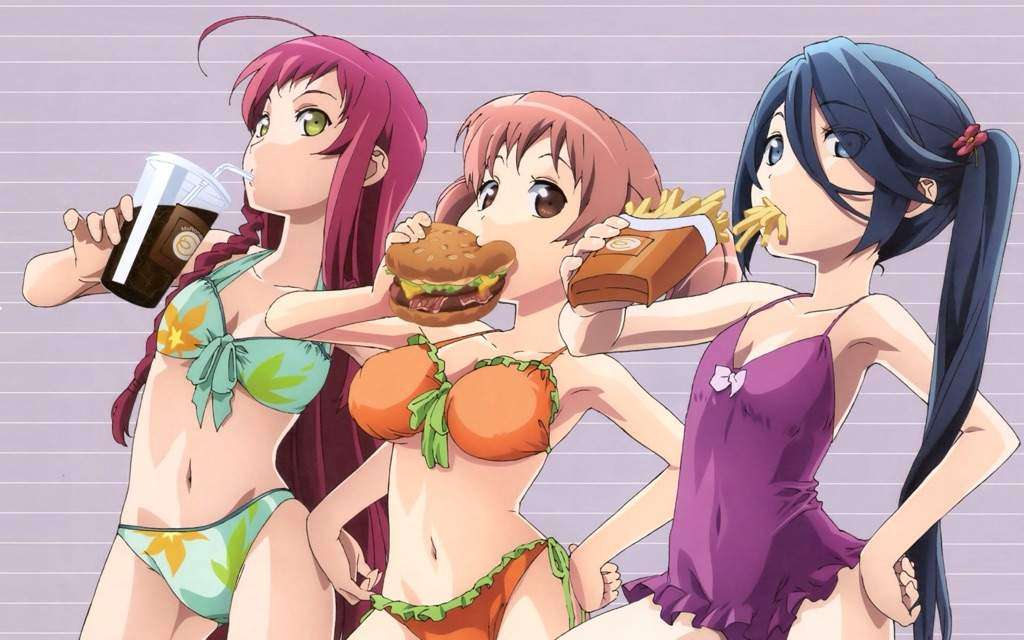 While no exact date (as of this article’s writing) for when season two will air has been given, it is eagerly anticipated, being almost eight years between seasons.

Regardless, it’s a Hell of a show. Yes, that pun was intended.

Give it a look if you haven’t, then catch season 2 with the rest of us! 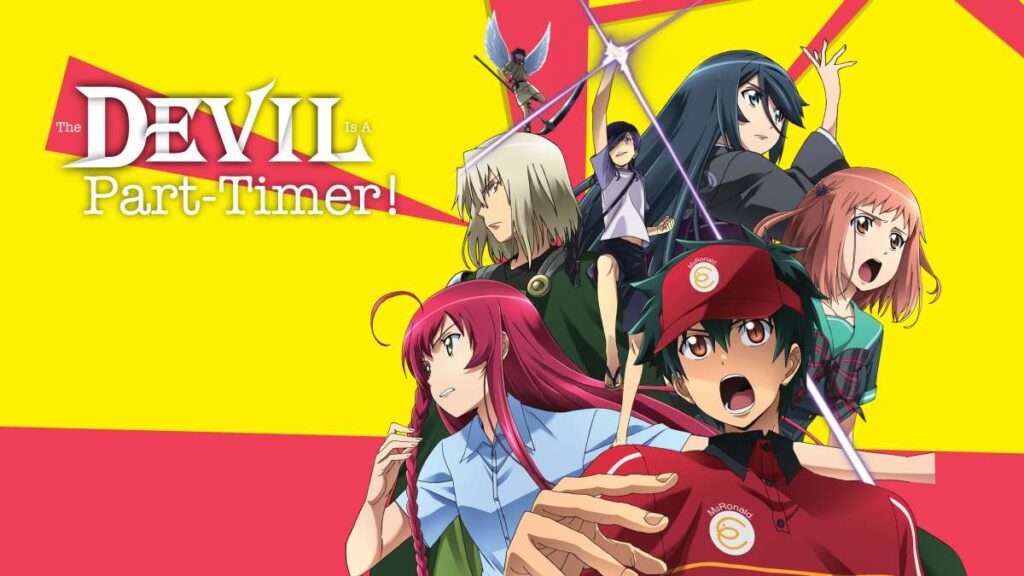