Alien is Great. Aliens is Even Better. Look Back at Alien 40 Years Later

Nearly forty years ago, Alien burst out of John Hurt’s chest and gnawed its way into our hearts.

Since then, a number of sequels have followed, including a weird mashup involving the villain from rival franchise Predator, but as is often the case, the sequels became progressively worse with each installment.

However, the second film in the series is arguably the best of the bunch, and it is here that I wish to direct our readers’ attention on this momentous anniversary.

On the surface, Alien is pretty much a standard horror movie that uses an inventive setting (mature space travel) and a strange and horrific creature in the role of the knife-wielding psycho.  Most sequels would simply opt to repeat the formula and change a few elements – new victims, new situations, but the same basic premise.

Aliens didn’t do that, and instead shifted the storyline from an implacable killer to that of a doomed expedition trying to survive.

In so doing, Aliens arguably gave birth to the concept behind countless first-person shooter console games, where the player struggles to marshal dwindling resources and improvised weaponry in order to survive.

As the story progresses, the challenges increase in difficulty leading to a classic boss fight.

This concept has become so common that young people today hardly think about it.  Like the internet, it’s been there as far back as they can remember, but back in 1986, it was a fresh take, combining action and horror.

It’s a neat way to tell a story.  Space lends a degree of claustrophobia that is hard to match in a conventional setting.  Whether trapped in the Nostromo or stuck on a distant planet with help weeks away, the knowledge that there is no easy exit adds an extra layer of fear and desperation to the story.

Game Over, Man! Game Over!

In an age of a global marketing based on non-English speakers, dialog is now viewed as unimportant.  The most one gets are snarky tension-cutting quips as the CGI version of Manhattan gets obliterated for the umpteenth time.

The dialogue in Aliens is pointed, funny, and realistic.  The troops talk like veteran infantry and Bill Paxton’s Private Hudson does a great job of showing how soldiers can seamlessly go from being whining shirkers to highly motivated killers.

Of course, Sigourney Weaver holds everything together and its her performance as Ellen Ripley – meditating on the events of the first film and reluctantly agreeing to participate in the next mission – that gives the sequel its power.

This highlights one of the problems of sequels, particularly if you have a character who is merely heroic rather than a hero.

Ripley is no hero, just a person of uncommon grit caught in circumstances beyond her control. Aliens manages the almost impossible feat of making her both more vulnerable and also stronger when push comes to shove. 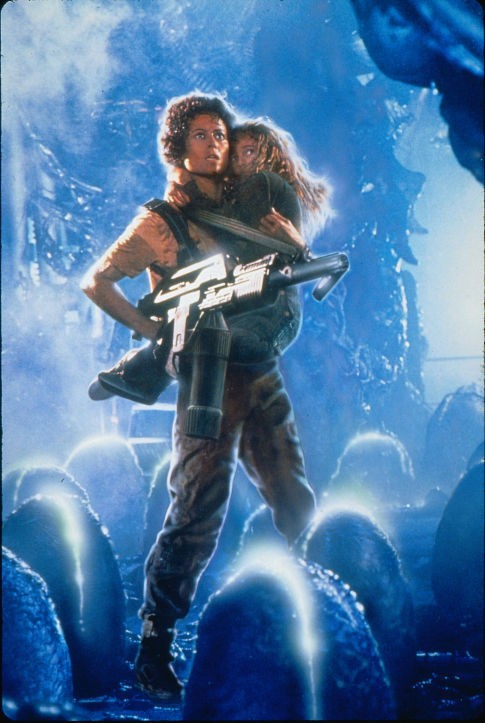 Normally, the result is the opposite – the character becomes obviously superhuman, slowly draining away the dramatic tension.  We no longer wonder if the character will survive and instead focus on how. This is also the point where cynical quips start to populate because even the writers can’t take the story seriously.

In Aliens, Ripley is still fresh and the film avoids that trap.  Both films also decisively refute the notion that strong female characters are somehow new in sci-fi settings.

And Then They Broke It

As I noted above, one can only go to the well so many times with an otherwise normal character before the concept wears thin. Two additional sequels pretty much trashed  Ripley as a character and it says something that the next development in the franchise was uber-nerd wet dream of Alien vs Predator.

The new hotness is of course “reimagining” where either entire films are remade or oddball prequels are cranked out to breathe new life in an otherwise decomposed corpse of setting.  Thus we got Prometheus, which I can’t even trash properly because I fell asleep halfway through it.  I think there was another film after that, but I’m not sure what it was.

It’s an ignoble end to a brilliant concept and creative achievement.  Forty years ago Alien scared the hell out of us and seven years later, Aliens opened the way for a new form of storytelling that continues to resonate.

Celebrate ALIEN DAY by viewing a collection of studio approved fan-made films set in the world of Alien!