Writer, journalist, blogger and comic industry critic Doug Ernst recently launched his Soulfinder: Demon’s Match Indiegogo campaign. Doug has been at the forefront of standing up for comic customers for a decade now. His mission to save the comic book industry started on his Douglas Ernst blog. He was calling out Mark Waid and Dan Slott before it became the cool thing to do. Doug was one of the original YouTubers along with Diversity and Comics, Capn Cummings and Englentine to push these issues to the forefront of the industry. 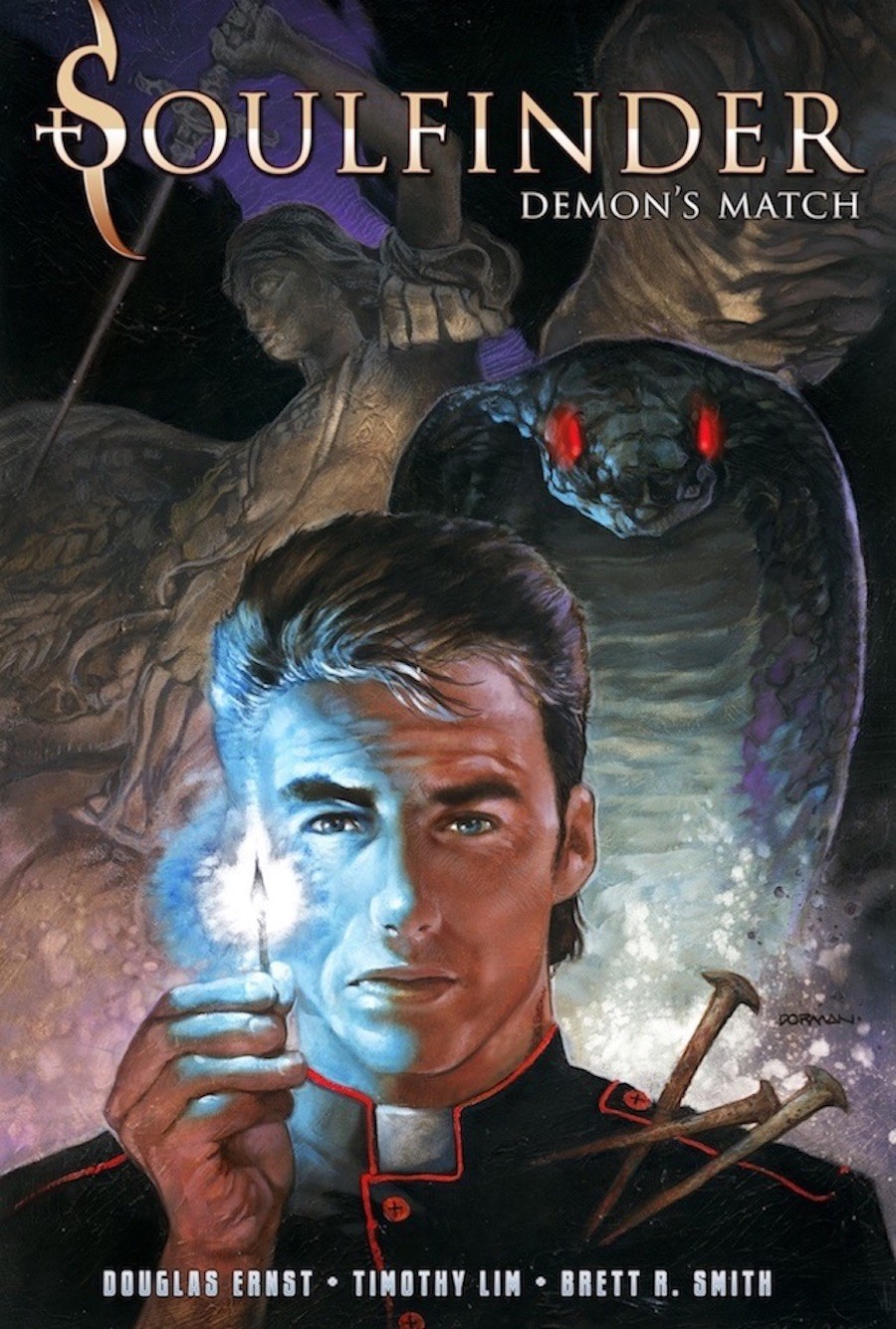 He’s championed many independent creators and their projects over the past 18 months. Soulfinder: Demon’s Match is Doug’s rejection of the status quo currently destroying an American institution. He’s promising a return to the classic hero’s journey with a focus on quality writing over ideology and politics. 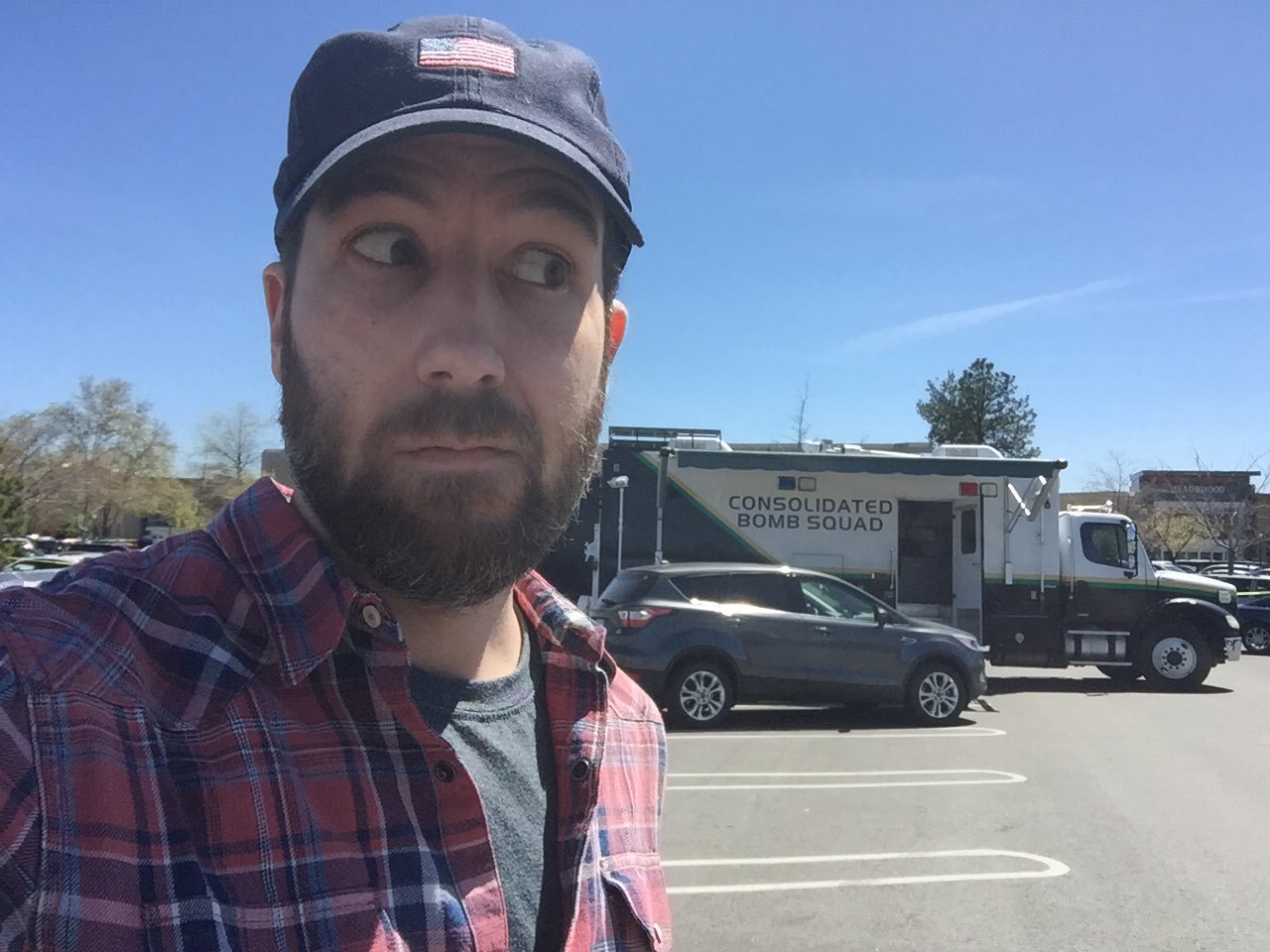 Doug is a long time writer but this is his first time publishing a comic book. He’s partnered with three seasoned comic industry pros for his debut graphic novel.

Brett R. Smith has decades of experience in the comic industry. He’s colored on some of the most storied franchises in the industry like Batman, G.I. Joe, Wolverine and Superman. Recently he’s worked extensively outside the “Big 2” in search of creative freedom. He’s the co-adapter, editor, creative director and color artist on the #1 New York Times bestselling adaptation of Peter Schweizer’s book, Clinton Cash: A Graphic Novel. He’s the color artist on the Jawbreakers: Lost Souls graphic novel that started the Indiegogo comic boom in 2018. 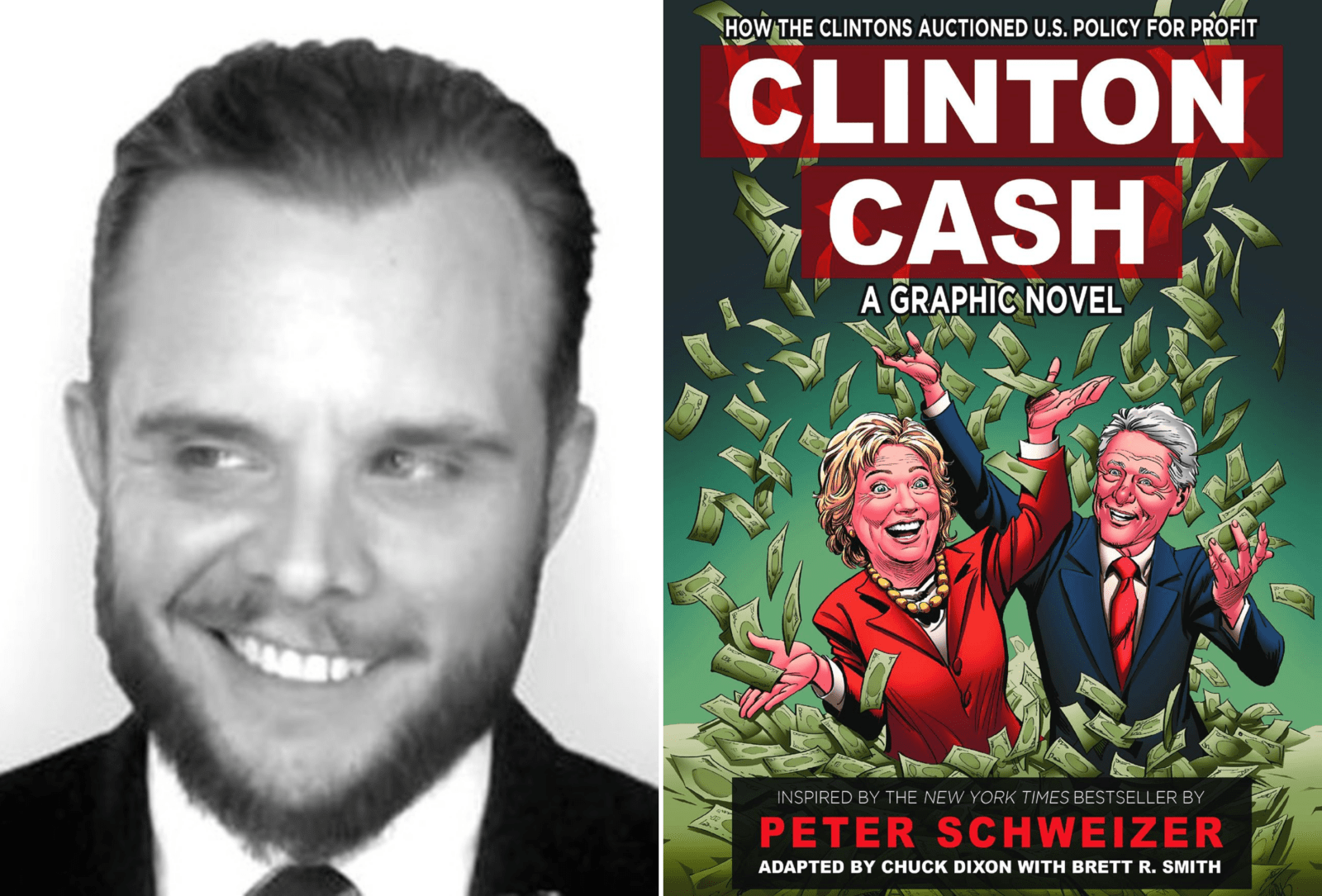 Doug Ernst couldn’t have connected with a more knowledgeable independent comic producer in my opinion. Brett’s also worked extensively with the primary artist on Soulfinder: Demon’s Match, Tim Lim. He’s the creative director and editor for Thump: The First Bundred Days. Brett is also the color artist on Trump’s Space Force, which the duo previously funded through Indiegogo as well.

Tim Lim is a veteran professional illustrator and political cartoonist. He started in the industry as a merchandising artist and has over 500 designs under his belt for entertainment juggernauts like Marvel, LucasFilm and Hasbro. He created variant covers for many of IDW’s top selling comic series before branching out and writing and illustrating his own books. His first fully illustrated title was #1 Amazon Best Seller Thump: The First Bundred Days. He followed it up with DC satire My Hero Magademia. Lim earned a reputation for sharp, humorous takes on current day politics. 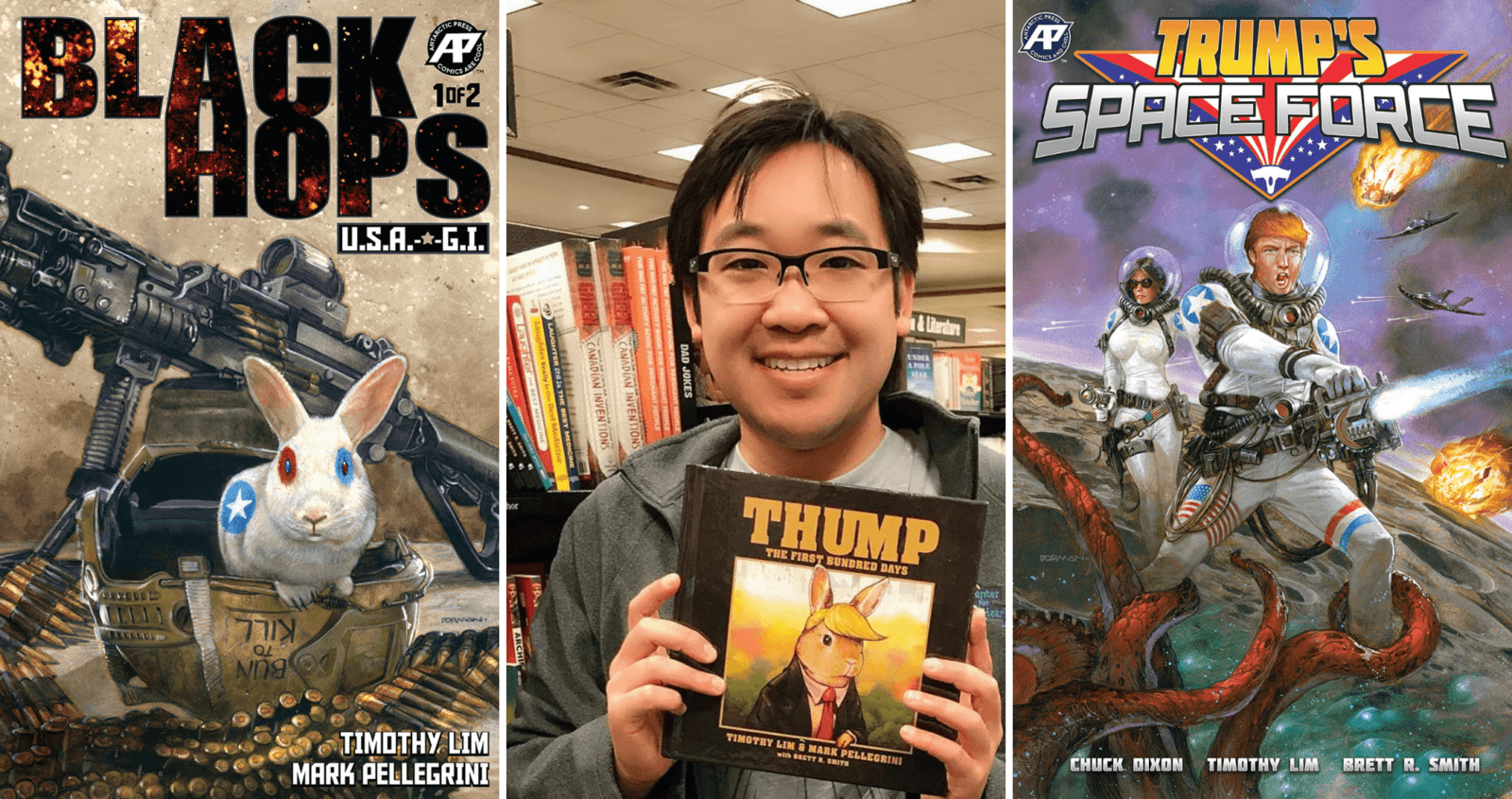 Tim Lim proved he’s no “one trick pony” with the excellent action series Black Hops: USA-*-GI with long-time collaborator Mark Pelligrini. Soulfinder: Demon’s Match is the latest opportunity for Lim to prove he’s a well-rounded visual storyteller. From the looks of the preview art he’s well on his way to crashing through another glass ceiling. He’s successfully crowdfunded two books himself and is an invaluable resource for the all-star creative team.

Soulfinder: Demon’s Match features another industry legend, cover artist Dave Dorman. The renowned painter and illustrator set the standard for cover art for well over a decade now. He’s created amazing covers for virtually every major comic publisher in the world. He’s created breathtaking illustrations for Star Wars, Indiana Jones, Aliens and Predators during his time in the industry. 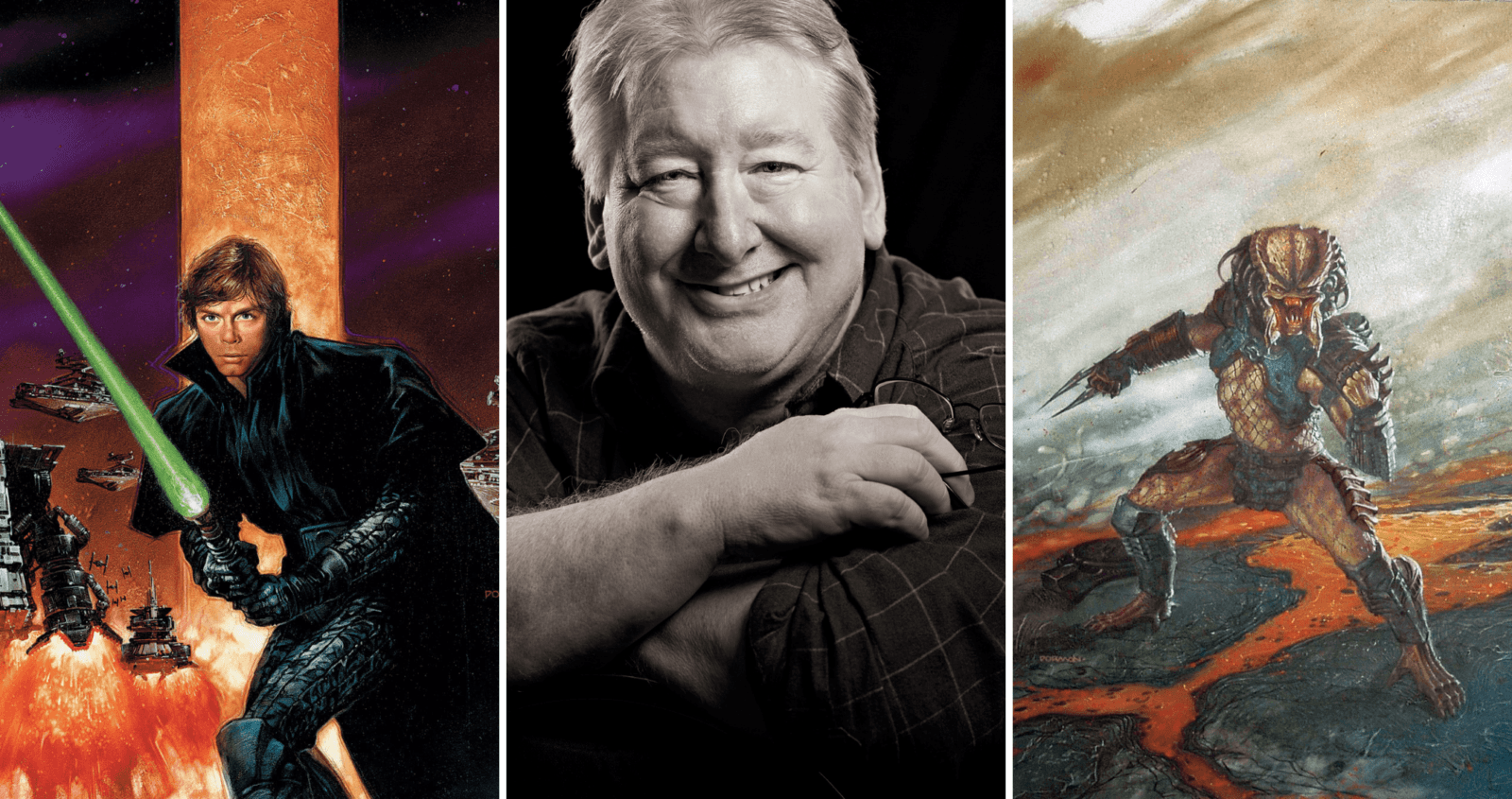 This art team is as in-demand as it gets on the independent comic book scene. Writer Doug Ernst’s story really needed to stand out to get them all on board.

Doug is a devout Catholic and proud military veteran as well as a professional writer and journalist. His faith and service to country appear to inspire the story behind Soulfinder: Demon’s Match. Father Patrick Retter is a Catholic priest wounded in action in his younger days. Retter serves a parish in a quiet town in Maryland. He’s experienced with the occult and often aids the local authorities on religious matters. A series of events leads Father Retter to believe a great evil is residing in the sleepy town of Steepleton. 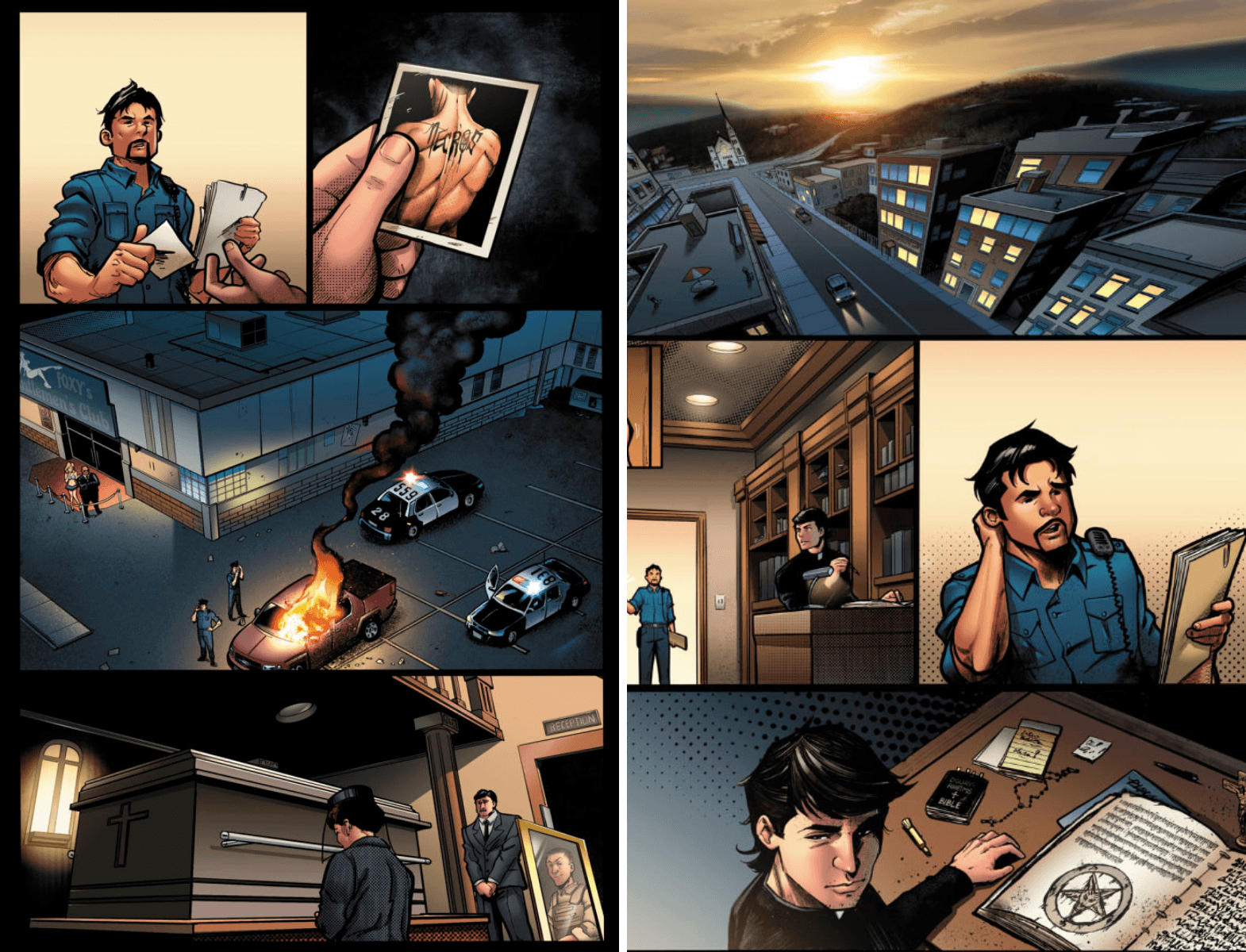 During his investigation into supernatural events he meets a mysterious mentor who introduces him to an ancient order of exorcists, who are all combat veterans, known as Soulfinders. Retter is hesitant to follow his calling. His encounters with a disturbing cult and the demons they worship may force him to accept his destiny. Retter is tested by giant serpents and humans possessed by demonic spirits during his journey. 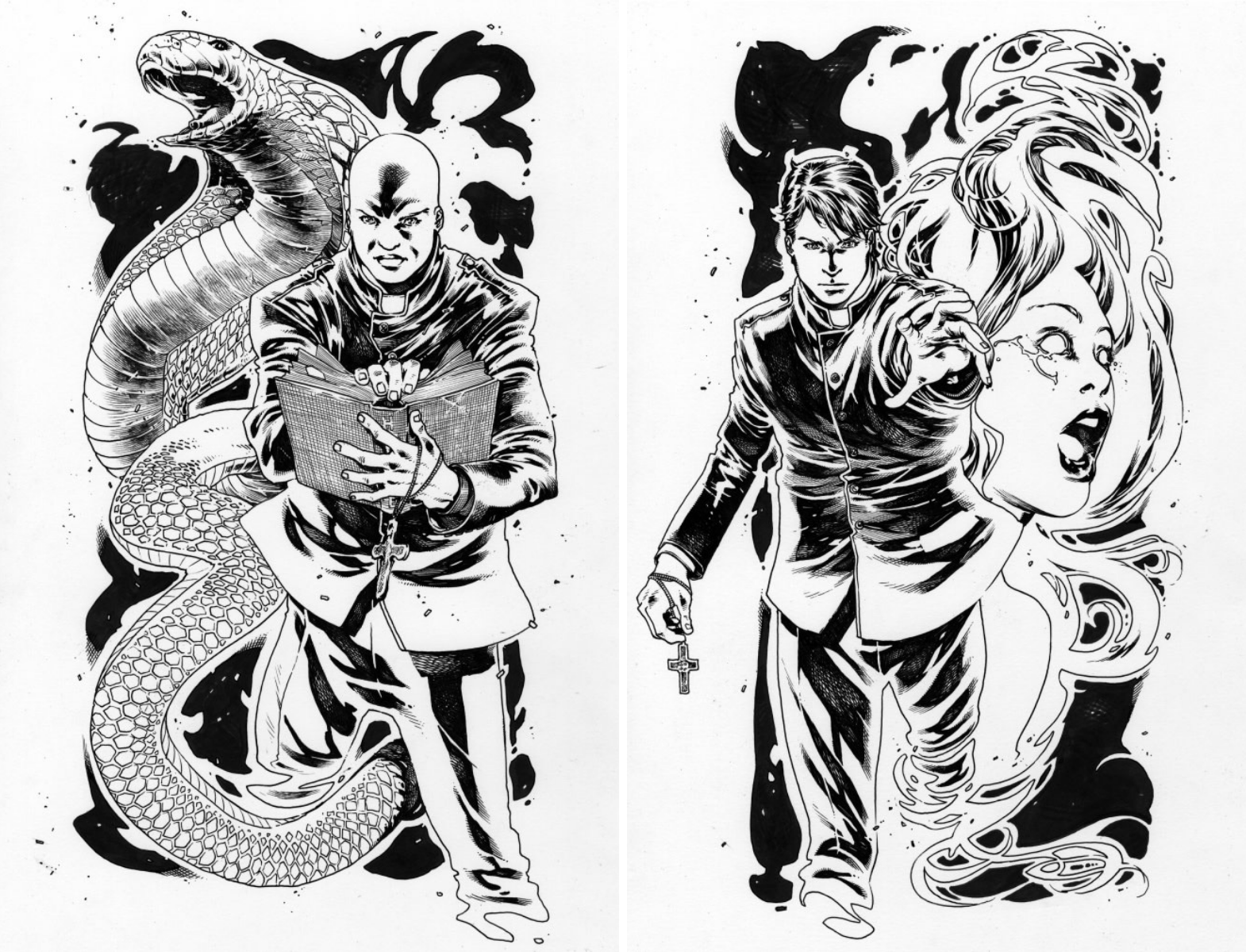 This look into the occult and supernatural sounds fascinating but the real intrigue is with main character Father Retter himself.

The team behind Soulfinder: Demon’s Match have left a few clues in the promotional art regarding the feature character. Doug previously confirmed Retter’s mentor is a Vietnam War veteran. The vehicle on fire doesn’t appear to be of that era, it’s very likely it’s Father Retter himself wounded in action. On the Dave Dorman cover there is discoloration on the left side of his neck, matching the side of the soldier on fire. Father Retter is also shown covering up similar discoloration on his left forearm as someone enters his study. 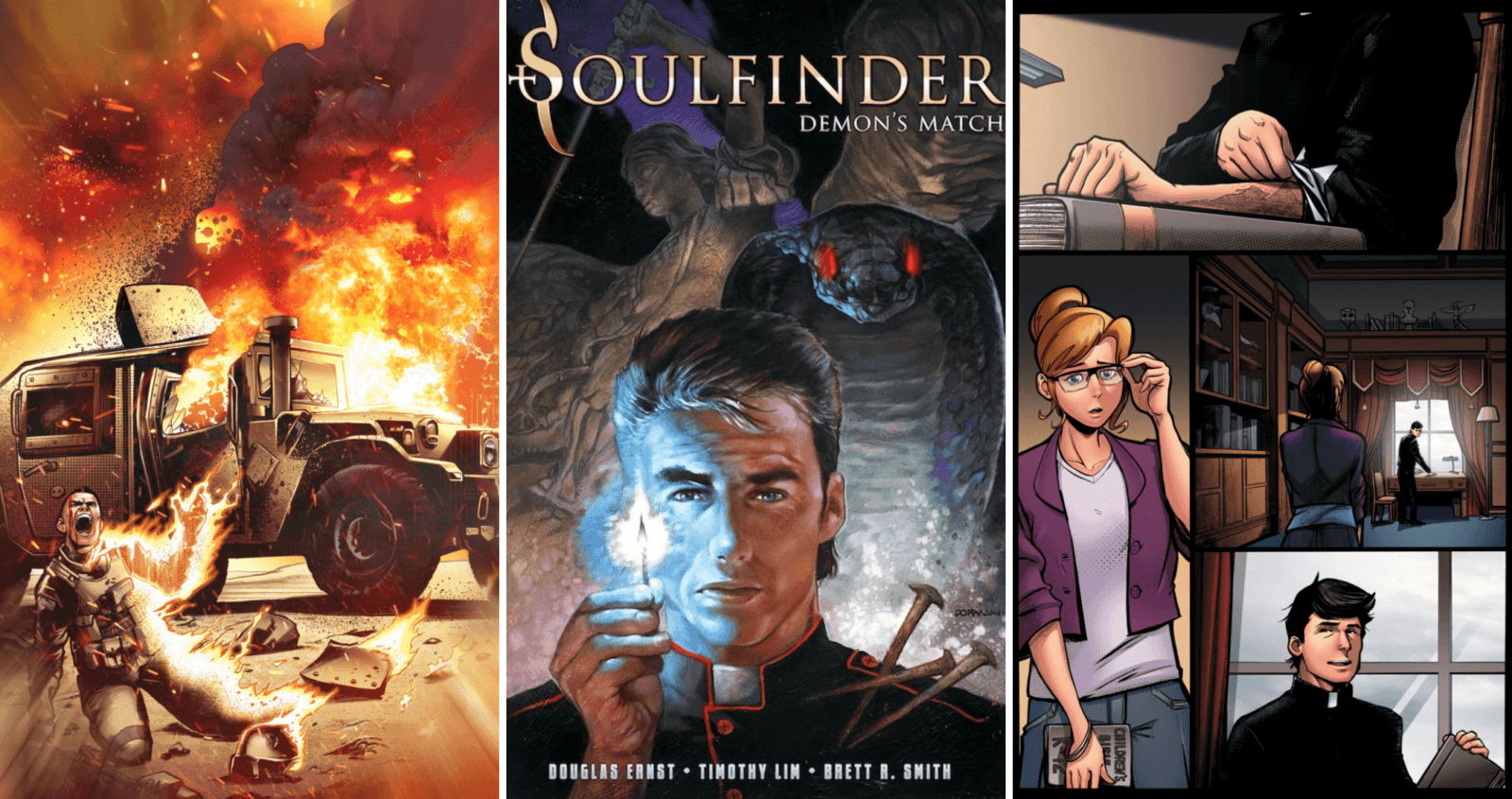 His combat wounds must be very extensive. In the Indiegogo promotion the team asks “Why do bad things happen to good people?” This is most likely in relation to the catastrophic burns Father Retter suffered in combat. How has this event affected Father Retter and his faith? Has it marked his relationships with people? Has this event improved him in some areas? He’s a priest, so he is no doubt very pious. But he’s still a man.

How do Doug and the team treat the very serious nature of unseen scars in combat verterans? Doug is an Army veteran and many of his friends fought in Iraq and Afghanistan. He’s spoken about losing friends in combat. This must be a very personal story for Doug. It will be very interesting to see how he expresses his feelings on the issue through Father Retter.

Soulfinder: Demon’s Match has the makings of an excellent series for years to come. Doug, Brett and Tim plan to keep working together and expanding the story.

Soulfinder: Demon’s Match backers will receive new stories from this all-star creative team. The line art from Tim Lim is fully complete. Brett R. Smith is finishing up the colors right now. Soulfinder: Demon’s Match is fully funded and close to crossing the $15k threshold with over 20 days left in the campaign. Doug Ernst is already outlining the sequel. Brett and Doug are talking about a Vietnam era book staring Father Retter’s mentor. This is just the beginning of a long running franchise. 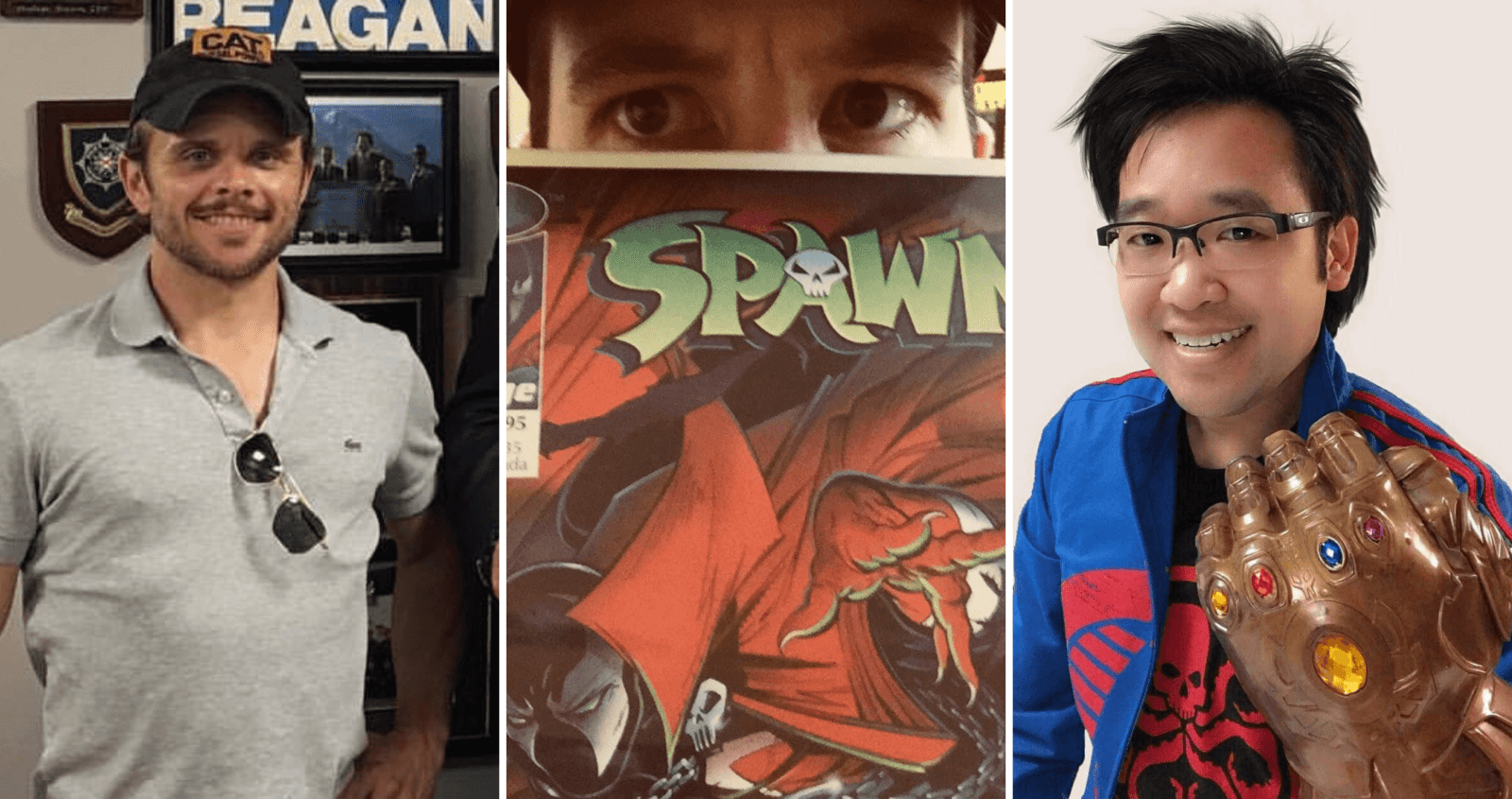 Tim Lim and Brett R. Smith’s previously funded and fulfilled Trump’s Space Force. They filled orders a few weeks late but the story is fully fleshed out. They both signed off on the plot in Soulfinder: Demon’s Match beforehand. They’re also almost completely finished with the art today. This book is all but guaranteed to fulfill on-time and likely early.

Doug Ernst, Brett R. Smith and Tim Lim’s Soulfinder: Demon’s Match Indiegogo campaign is still active. The creative team is first-rate and has decades of experience in the industry. The story is very exciting and appeals to a wide reading audience. Doug’s personal experience should lead to a perfectly fleshed out Father Retter and pay tribute to those with unseen scars. Doug, Brett and Tim are the newest band on the scene and they happen to be great friends. They aren’t breaking up anytime soon.

For more information on the Soulfinder: Demon’s Match campaign watch my interview with Doug Ernst in the video below.