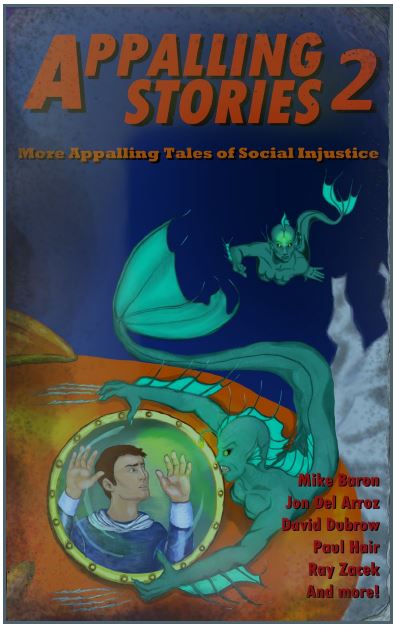 Pulp fiction stories had their heyday in the early and mid-twentieth century. And a just-published anthology harkens back to that time even as these tales have some very modern settings. This exciting new release, with a foreword by Christian Toto of Hollywood in Toto, has some great authors you already know (such as Mike Baron, co-creator of the superhero Nexus, and sci-fi author Jon Del Arroz) and others you’ll meet for the first time. So if you’re looking for your next fun read, you just might want to add Appalling Stories 2: More Appalling Tales of Social Injustice to your wish list.

Authors David Dubrow, Ray Zacek, and Paul Hair wrote Appalling Stories: 13 Tales of Social Injustice nearly a year ago. And now they’re back for the sequel, but they’ve added some excellent new talent as well. Here’s a glimpse at some of what you can expect from these ten, thrilling tales.

Mike Baron has had a long and successful career as an author. In addition to Nexus and other comic books, he’s written many novels and short stories. “Trail of the Loathsome Swine” is his latest. Young Cody is on a warpath following a death in the family. But there are a few people who want to foil his plans. And after that, things take a darkly humorous turn in this rural yarn!

Jon Del Arroz is proving to be a prolific author, turning out novels, short stories, and comic books on a regular basis. He and Avily Jerome co-authored “Angel of Death,” a tale that combines a theological conflict with an original take on humanity having first contact with alien life. And the deeper you go into the plot, the closer those two conflicts come to merging into one.

Readers will find themselves back on good ol’ earth for A. J. Powers’s “Betrayal.” Chet Ferguson is an entrepreneur. He’s also really into virtue signaling and into tearing down the all-out bigotry that he’s sure defines America. In fact, Chet thinks he’s part of the vanguard of the unstoppable army that’s on the right side of changing history. But his beliefs, and his life, start unraveling when a seemingly innocent little mistake leads to his biggest hero turning on him.

Androids are a great way to explore different aspects of humanity. They can also be fun plot devices. And the android in Hillary Lyon’s “Rexxi’s Glitch” is both. Quinn is a liberal arts professor who wants a plain, obedient wife. He gets that by ordering Rexxi. Or, at least, he has it until a new neighbor moves in beside him. Then . . . well then his and Rexxi’s relationship starts changing.

Do you know where society is headed? If you pay attention to current trends you should have a pretty good idea. David Dubrow pays attention and his “Deprogram” provides a realistic look into what could be the near future. Grayson de-brainwashes people for a living. And when a couple come to him after a girl gets mixed up with the White Liberty Alliance, he takes the job. He’s convinced his services will make the couple happy clients. But the task ends up being a quite interesting one for all involved.

Those are summaries of just five of the tales in Appalling Stories 2. While a prose anthology is a bit different than what we normally share on our site, it’s definitely of pop culture interest. With thrilling and original tales unlike what people will find anywhere else. So if you’re looking for your next fun read, you just might want to add Appalling Stories 2: More Appalling Tales of Social Injustice to your wish list.

Bleeding Fool chatted recently with Paul Hair to learn a bit more about ‘Appalling Stories 2’ and the reasons it came to be:

BF: How did you first get involved with the the first Appalling Stories anthology?

Once we figured out that, we knew we wanted another author to join us, but finding authors who say they want to write and will follow-through with writing (including meeting deadlines) is challenging. However, Dave knew an author who was capable of doing both these things: Ray Zacek. And, voila, the three of us published “Appalling Stories: 13 Tales of Social Injustice” in December 2017. The three of us recruited more authors for the sequel, “Appalling Stories 2: More Appalling Tales of Social Injustice,” which we just published last month.

BF: How important are these tales to our modern culture?

PH: For my entire adult life (which has been well over 20 years now – I’m old!), Hollywood and the rest of the entertainment industry has produced products (movies, TV, music, books, and so forth) that run counter to my values. Many people have complained about it. In fact, the conservative movement has developed a quite vigorous industry that centers on complaining about entertainment (and politics and culture).  But how many people have actually tried to change things—tried to be the creators? Not too many. Those of us who have contributed to the two “Appalling Stories” anthologies are the exceptions. We are making culture and entertainment. It’s important and it’s fun!

BF: What is accomplished when creatives begin to tweak the “groupthink” of today’s progressives and is there a best practice for that task in your mind?

PH: Entertaining readers was our primary focus with both “Appalling Stories” anthologies. Hopefully we accomplished that. But tweaking groupthink was a pretty big secondary focus. And by doing so through fiction, we demonstrated that people who don’t subscribe to the dominating, oppressive beliefs of our Ruling Class can produce excellent entertainment. This in turn means that everyone who can see mainstream entertainment for what it really is now has a quality alternative to turn to.

I think there are a lot of different forums through which one can challenge groupthink, so there is no single best practice for everyone. But for me, as of right now, challenging it through fiction is the best way.

BF: What’s next for Paul Hair?

PH: Good question. One project I’m considering that might interest Bleeding Fool readers is an anthology where all the stories focus on telling a tale involving superhumans and theology. That might sound like a bad idea at first. But it isn’t. It’s not going to be a collection of sermons. Instead, I want it to be a collection of literature—tales that have eternal and weighty themes.

For example, one story might involve two superhumans who battle a common foe. But they hold different theological beliefs. How would that affect their long-term friendship—even after they overcome a struggle together? Or what happens when a great threat looms and someone tries to talk a superhuman hero out of striking it down by insisting that “peace is the only godly response?” What does the hero say to that? How does he respond? Or how does a superhuman hero’s theological beliefs impact his actions and mindset during war—when he’s killing people (including civilians) and involved in all sorts of other things modern society views as “nasty” and “wrong?”

I’ve mentioned this idea to other authors, and more than a few have expressed interest in contributing to such an anthology. But it’s not a sure thing yet.

BF: Tell me about how you heard of our little website Bleeding Fool?

PH: It was Bleeding Fool contributor Dave Huber who introduced me to the site. Dave ran a site called The Colossus of Rhodey. He started it in July 2005 according to its archives (he stopped publishing it in 2016). In 2005, blogs weren’t new. But they weren’t quite huge at that time if I recall correctly. So Dave wasn’t one of the first bloggers discussing these topics, but I think it’s fair to say he was one of the earlier ones. And The Colossus of Rhodey was unique. Most everyone else was blogging about politics then, but Dave blogged about comic books.

CoR was probably the most influential site when it came to informing me about what was happening in the comic book industry. Its self-destruction was just starting to take off in the mid aughts and Dave documented that. I learned a lot from his site. Others did too. And I believe he never received the credit he deserved. I believe (I can’t prove it) that others stole stuff he uncovered without attributing it to him.

Learning all I did from CoR contributed (along with a ton of other things) to my decision to start writing fiction—to start writing the stories I wanted to read. I think he introduced me to Bleeding Fool.

BF: We love Dave and I too followed his website for quite some time, along with Douglas Ernst and many other early “town crier” types documenting the decline of the comics industry to pc culture. What else would you like to share before we call this an interview?

PH: As a final note, readers who want to follow my work can do so at LiberateLiberty.com. I post updates about my fiction there, along with links to my books. I also occasionally post the free short story there. My Twitter handle is @PaulHair1, and I’m also currently an editor at TheLoftusParty.com.

BF: Thanks Paul! We’ll check those out!