Is ‘Tales From Neroesville’ the Best Comics Deal on Indiegogo? 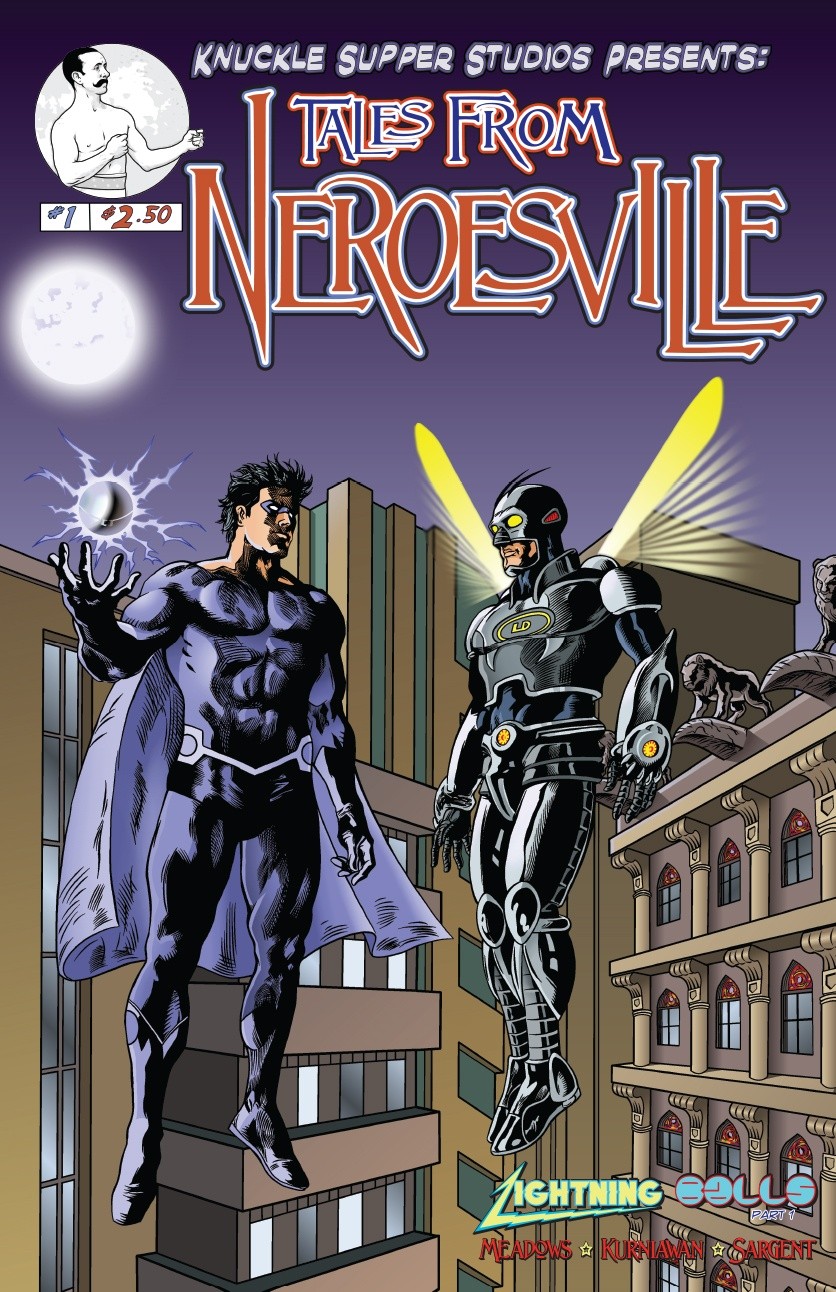 D. Jason Meadows is the founder of Knuckle Supper Studios, a comic book company that promises to “put out entertaining comic books that everyone can enjoy. Period. No political leanings. No political correctness. No social morals or SJW nonsense shoved down your throat.” Rather, his funny books aim to “provide an escape from the rigors of real-life.”

Meadows’s first offering in escapism is Tales From Neroesville 1-3, which came to my attention as possibly the single best deal for new comics currently offered through Indiegogo. TFN is a book with no singular star. The city itself serves as the backdrop for their entire universe with different stars and story types in each arc. Neroesville has the highest population of superheroes of any city in the world. It also has the most supervillains. Living there is unlike living anywhere else. Every day is an adventure.

I spoke with Meadows via DMs over the weekend about the greatness of 80’s comics, his efforts to find an audience today, and one hilarious misunderstanding involving the name of his comic. What follows is a very lightly edited transcript of our conversation.

Jeremy Lott: There’s been some controversy about the title of your comic. Where did Tales From Neroesville (TFN) come from and what was one recent, wildly offensive misreading?

D. Jason Meadows: It all started with a name: “HappyJack.” From there I created the first character of my ever-expanding universe. But, as much as I love HappyJack, I knew that I would grow bored writing the same character over and over.

I also felt that I couldn’t tell every type of story I wanted to tell with that one character. So I wanted to take an Astro City approach, but what to name the city and the book itself? Then one day I had this vision of entering the city limits with one of those big “Welcome To…” billboards. I envisioned “Neroesville” with an “H” spray painted over the “N” and it just stuck.

Not until Ethan Van Sciver and Antonio Brice pointed it out on a livestream did I realize it was one letter off from being NEGROESville. Yeah, I swallowed my tongue when I heard it. Although I hear some people had quite a chuckle over it. 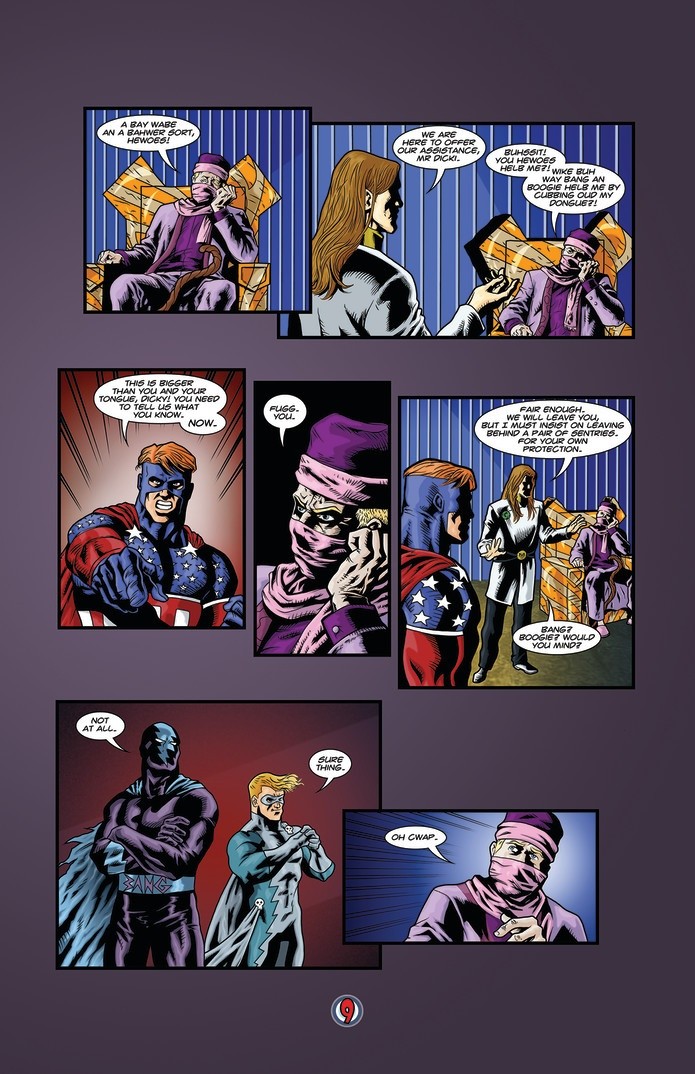 Jeremy: The comic is the best bargain for new comics that I could find on Indiegogo – three comics for $6, or $11 with shipping. How can you produce it so cheaply?

Jason: Printing on heavier, glossy stock put my cost at between $3 – $5 per copy. So I was looking at a cover price of about $6 per issue. This would have meant just the 3 issues of TFN with shipping would have been a $20 – $25 perk.

That seemed like a lot to ask backers to put into an unknown creator. I want to give fans as much bang for their buck as possible. Since the price was considerably lower and because I am a huge fan of the 80’s indie comics scene, I decided to go with newsprint. This is one of the approaches I’ve decided to take to differentiate myself from other campaigns. 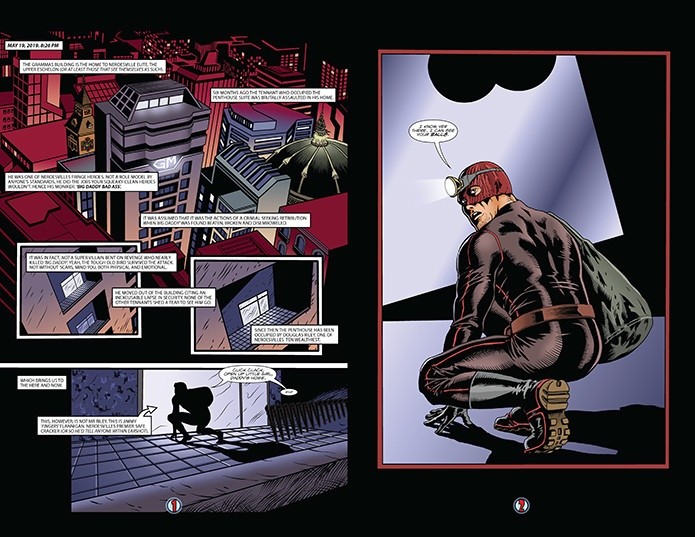 Jeremy: One other thing that is different from many campaigns is that the comics are already done. You promise to lengthen the issues if you meet some modest fundraising goals. (The flexible goal for TFN is $2,500.) Are those additions already done?

Jason: Yes. I decided before launching that I was going to have everything done and ready to go to print (aside from thanks, ads, etc. that are contingent on backers) before launching. This was another business plan I made to not only differentiate our book, but also to help give Comicsgate some positive press.

Some campaigns run “late” or just need the campaign funding to finance the creation of the books, leaving backers waiting months to receive the product. I’m taking a different approach that will not only give backers a better experience, but will also help me launch campaigns regularly. 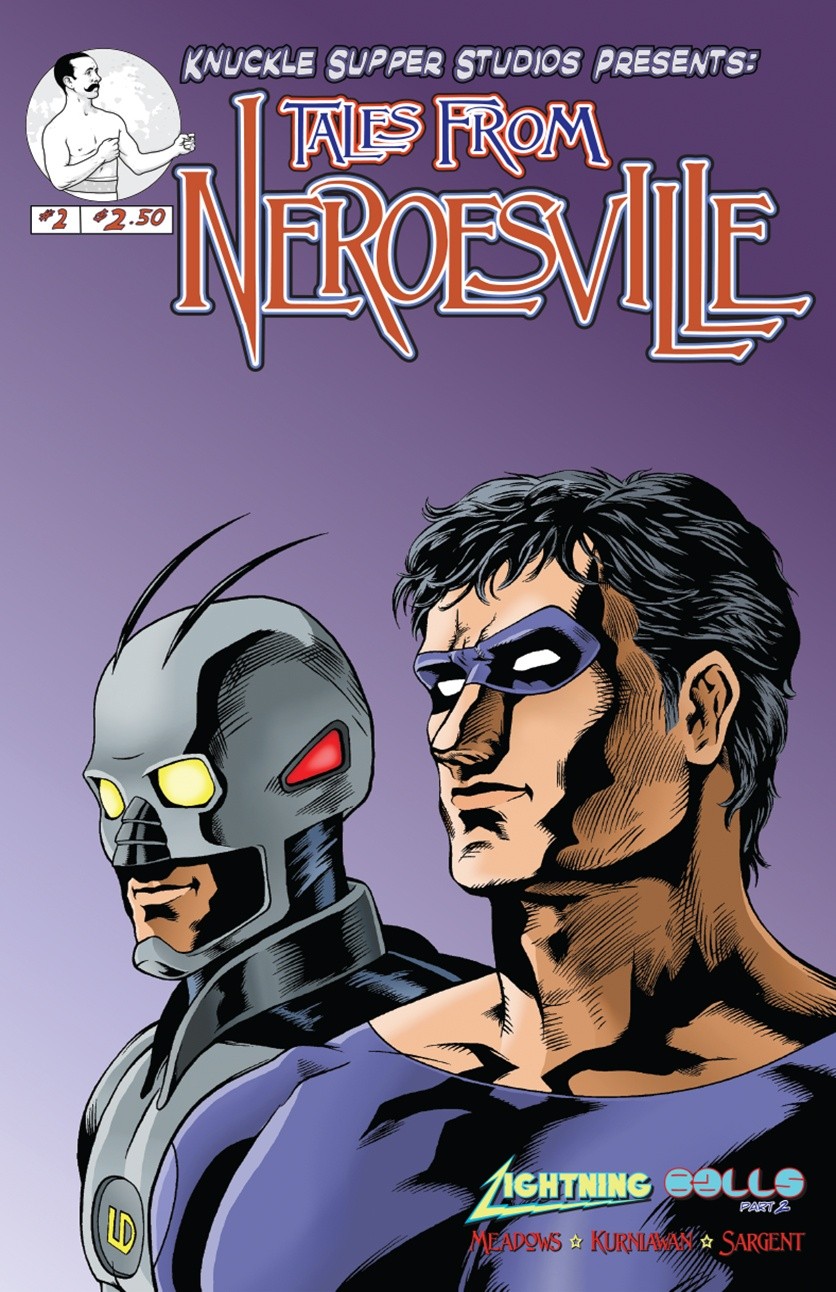 Jeremy: You appear to have dozens of characters ready to go. Can you tell us about HappyJack and two other favorites?

Jason: HappyJack is the “me” I feel I would be if I were a supe. He’s very “Spider-Man” (the REAL Spider-Man) in personality. Cracking jokes, confounding villains with wisecracks, trying to have a positive outlook. Meanwhile, he struggles in real life. Financial woes, relationship troubles, etc. He has no superpowers, but relies on a little tech and keeping a level head in the face of calamity.

Lightning Doug and AirBall are my universe’s Blue Beetle and Booster Gold. I loved those guys so much in the 80’s and I wanted a “buddy flick” team that were, for better or worse, the lovable losers of the hero community. Their personalities and outlook are very different, which I think builds the comradery between then and can lead to hilarity. I’ve got the next 4 or 5 issues already planned out, but I hope to come back to them soon. 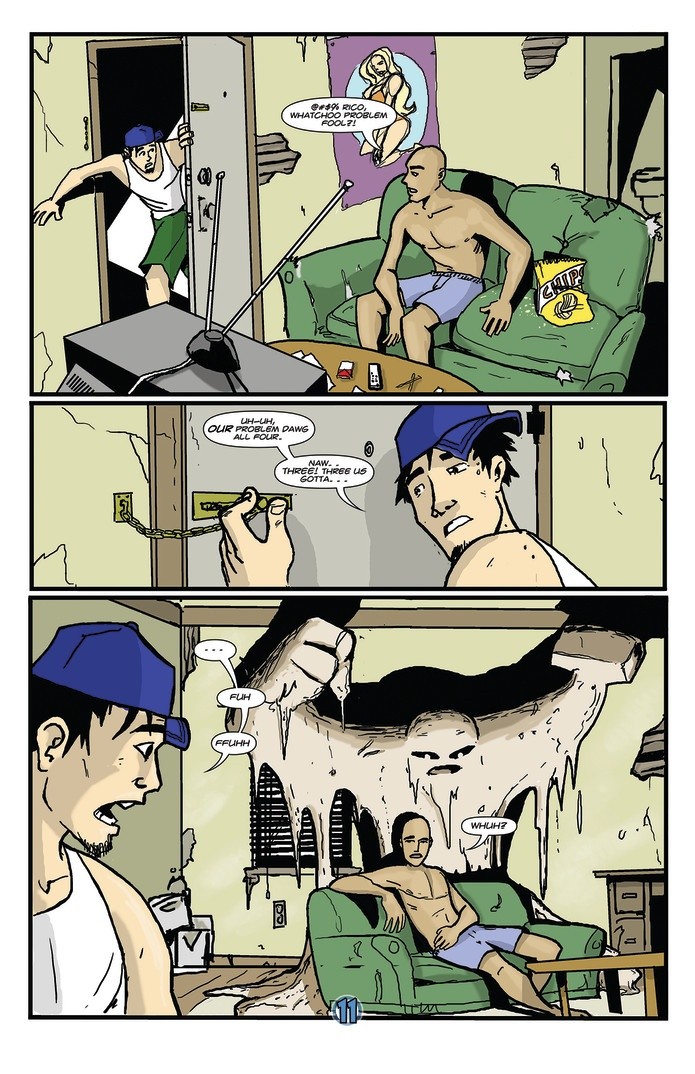 Jeremy: Who is doing the art on these books?

Jason: Issues 1 and 2 were penciled by Andi Kurniawan. He’s an amazing artist living in Indonesia who I desperately hope to work with again in the future. He’s since started a family and gotten a “real job” in commercial art and has stepped away from comics.

Issue 3 had Jim McMunn handle all art chores while I lettered. Jim is no longer working in comics, but I’d love to pull him out of retirement someday, if only for one more issue. It’s a shame to see such talent not being utilized, but he too has started a family and the political battleground in current comics turned him off. 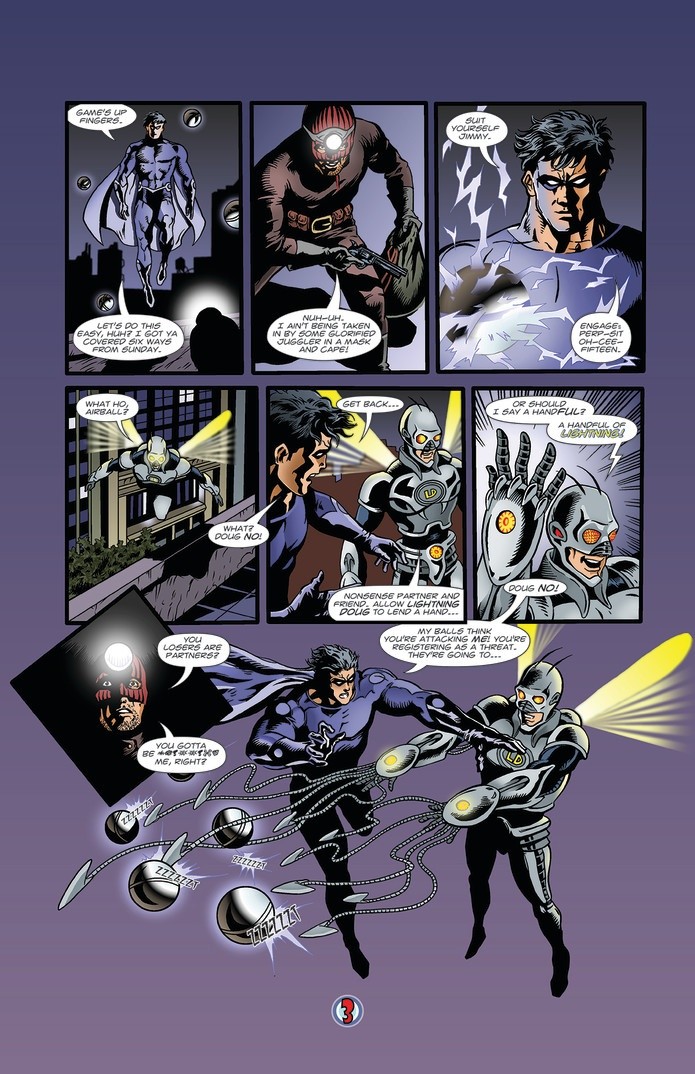 Jeremy: Who will do the art in later issues?

Jason: Part of the fun of doing different characters and genres, is finding just the right artist for a story. Issue 4 is penciled by Karly Engracia with inks/letters/colors by me. A google search will show you how busy Karly is and that he’s going to be an artist to know. This is not the last you’ll hear his name.

Issue 5 is currently being penciled and inked by Kelly Chandra. Kelly is an Indonesian artist who reached out to me looking for work. His simple, clean style was just what I was looking for in a script I had done and sitting aside. I will probably letter but will likely outsource coloring.

I haven’t settled on an artist got issues 6 or 7 and 8 yet. I am handling all duties on a 3 issue arc introducing HappyJack. The first issue is completely finished and in the can. It’s a wild ride of a story and doing everything myself is a slow process, but it’s my baby. I am thinking about including one issue of this mini in the next 3 Indiegogo campaigns. 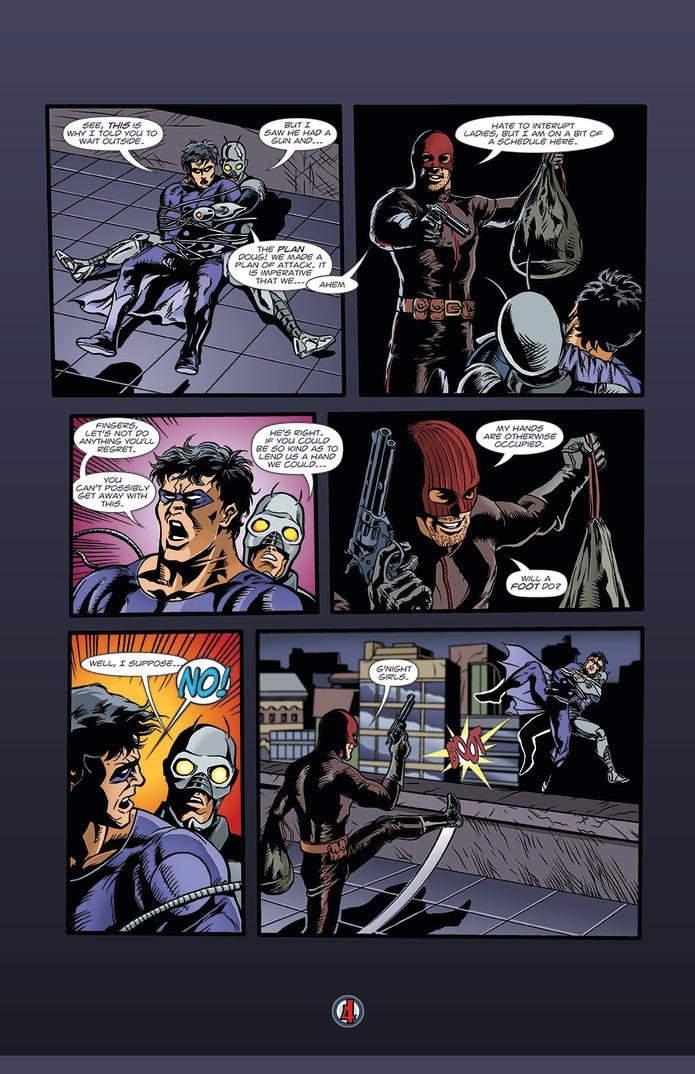 Jeremy: You mentioned Astro City. What are your influences? What inspired you to make comics of your own?

Jason: I was inspired by 80’s indie comics. Roachmill, Cat & Mouse, Grips, Mighty Mites, Boris the Bear, Dalgoda, Ex-Mutants, Whisper. There was just something in these books that spoke to me more than any Marvel or DC book. They were more raw, being black and white and created on shoestring budgets, but there was more passion to them, probably because it was the creators writing and illustrating the characters. These were the creator’s babies, they belonged to them and no one else. It just spoke to me. Even as a teenager that meant something to me.

Jeremy: What do you think of the indie comics scene today?

Jason: I am thrilled that so many creators are able to get their books out there. With online services, print on demand, crowdfunding, and digital comics, etc., creators have a multitude of outlets available to them. That’s great for readers, but for creators it’s very hard to get any notice or eyes your product. It is a bit of a double-edged sword.

As an indie comics fan, what I miss in the current market is humor. Most creators seem to be putting out epic tales that are very serious in tone, and the books that are meant to be funny in tone are over the top. I call it the Deadpool effect. Subtlety is a lost art. So, as a creator, that is one thing I am striving for. 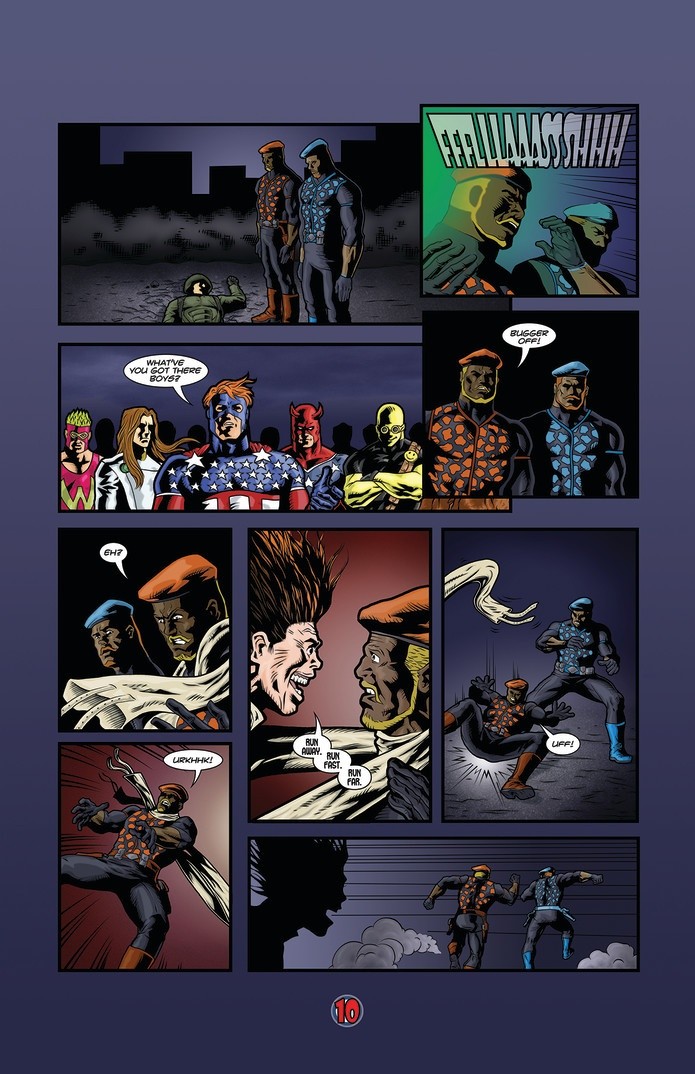 Jeremy: When people ask me if my own Movie Men is funny, I say yes but it’s humor arising from events. The characters take it seriously but there’s a lot of absurdity that comes from absurd situations. Is that your approach as well?

Jason: Exactly. They say a comedian should never have to explain a joke. As writers, we should never have to just have a character “speak” the joke. And we certainly shouldn’t always need the character to break the fourth wall and say it directly to the reader. It packs more punch when the reader goes “oooooh, I get it.” It’s just better writing and it’s more impactful.

Jeremy: How many issues to you have planned out? Scripted? How long to you want this to go?

Jason: The 3 issues on my Indiegogo campaign are 100% done. Issue 4 just needs finished colors (it’s flatted, inked, lettered, etc.). Issue 5 is being penciled/inked now. Issues 6, 7, and 8 are scripted. Issues 9-12 are rough outlines which will be scripted closer to when I’m ready to find an illustrator. Beyond that, I have another 3 or 4 issues that are just ideas scratched on a tablet.

Issue 1 of a 3 issue stand-alone miniseries is 100% done, with issue 2 being penciled now. All 3 issues are scripted. I’d like to run with TFN until I run out of stories (or go fully insane). My goal was to run 2 campaigns a year, giving readers 6 issues annually. This first campaign is struggling, so that may be pushed back to just one campaign a year for now. 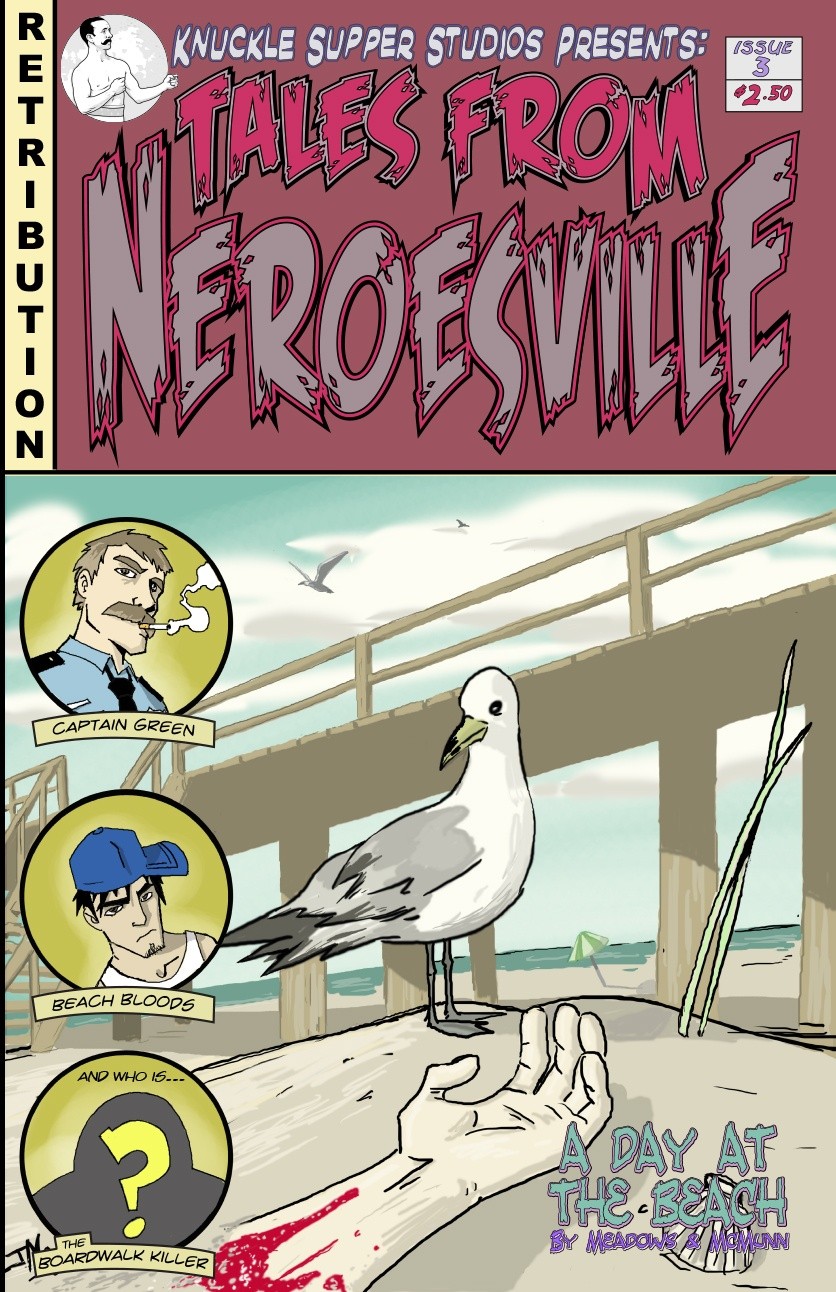 Jeremy: I hope it picks up momentum. You’re offering a promising product at what appears to me to be the best price for new comics on Indiegogo. Any last words for potential readers?

Jason: If you like good, fun comics at a fair price, give Tales From Neroesville a shot. We’ll both be glad you did! That and I come bearing gifts. Readers of this interview are invited to take a look at two “secret” perks. Get comics + free swag here or comics + pinup + free swag here. Essentially these are “Just the Comics” and “Comics plus signed HERO print” perks respectively, but I’m throwing in free swag. Stickers, magnets, sketch cards, etc. Same prices, just with added free stuff.

There’s still a few weeks left to get in on this campaign!
Check it out here.