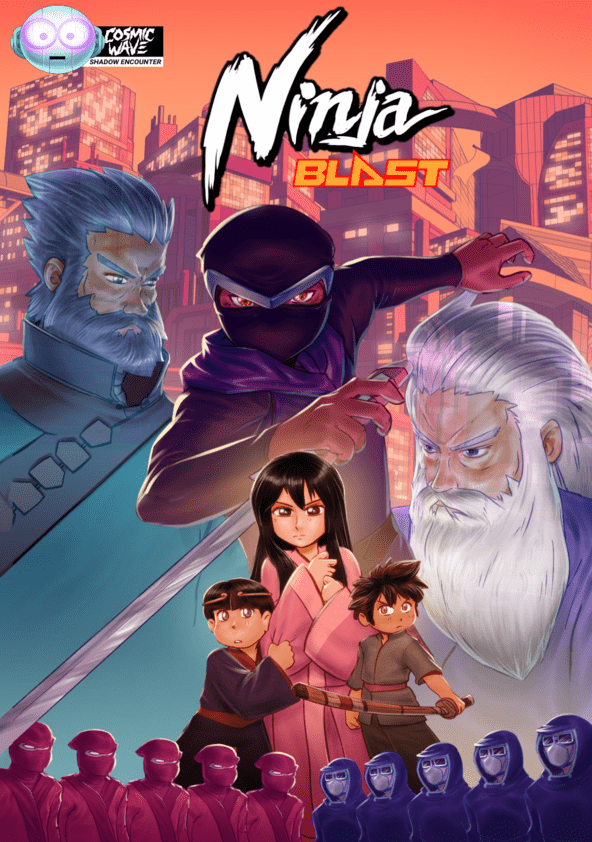 Jay Upshaw: Ninja Blast is a revenge story. It is about a young shadow blast ninja who fins himself in a dangerous feud between his sensei and the general of neo Japan (the sensei brother)!

CB: Where did the idea for Ninja Blast originate? And why tell this story in a comic?

JU: Ninja Blast has been in my head for 10 years, but I have been drawing ace (the main character) ever since I was seven years old. Ninja Blast comes from my love of ninjas ever since I seen the first ninja turtles live action movie when I was 7 years old and my love for manga and anime. 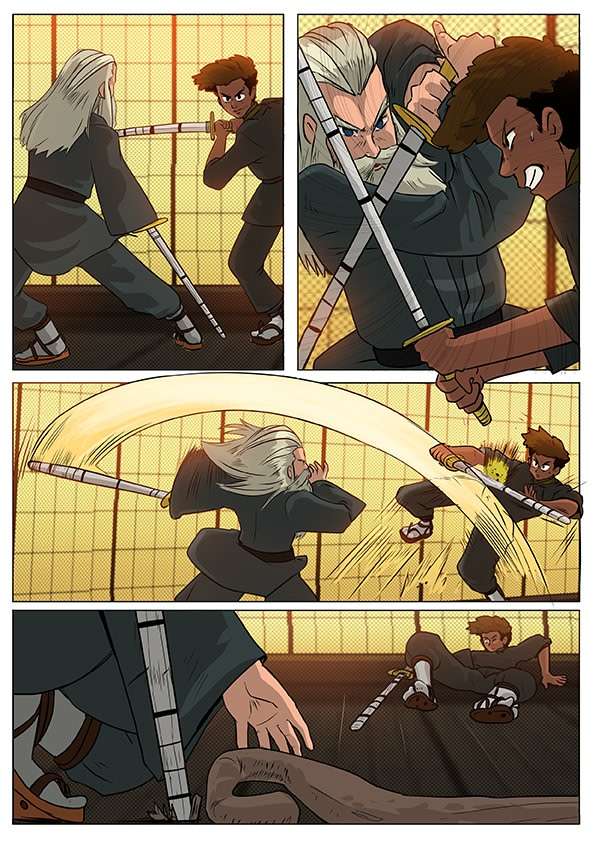 JU: I want all ages of comic readers who love great art and story to have a fun nostalgia blast from reading this manga style comic, old comic readers who enjoyed 90’s anime and comics will really like this comic book. 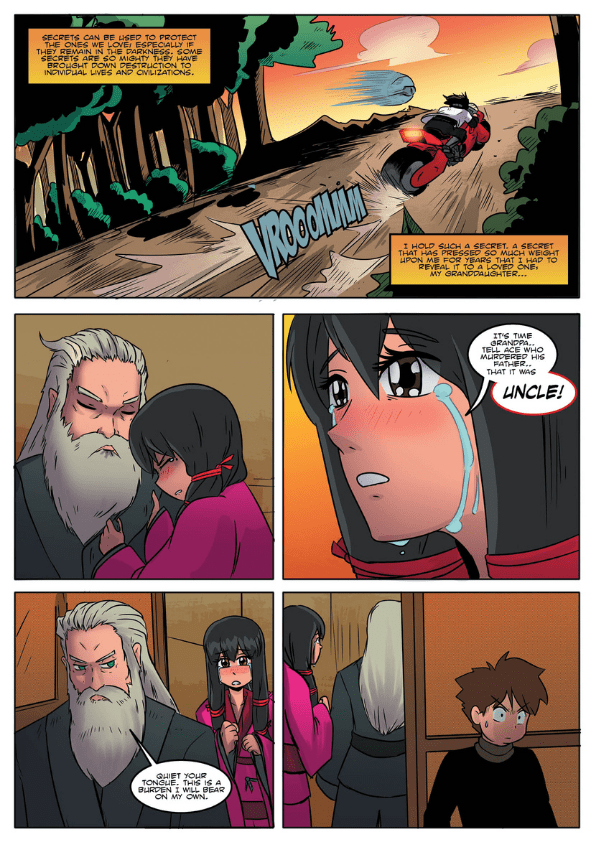 CB: What’s been your experience with crowdfunding? How did you first get into this and how did it lead to this?

JU: I am a youtuber, and I notice my comic book youtube comrades who have had many campaigns with kickstarter and indiegogo before, I learned from them and wanted to put myself in front of the world with my idea that I have been working on, this is my first campaign and I am really hoping it won’t be my last I am enjoying the creating aspect of things. 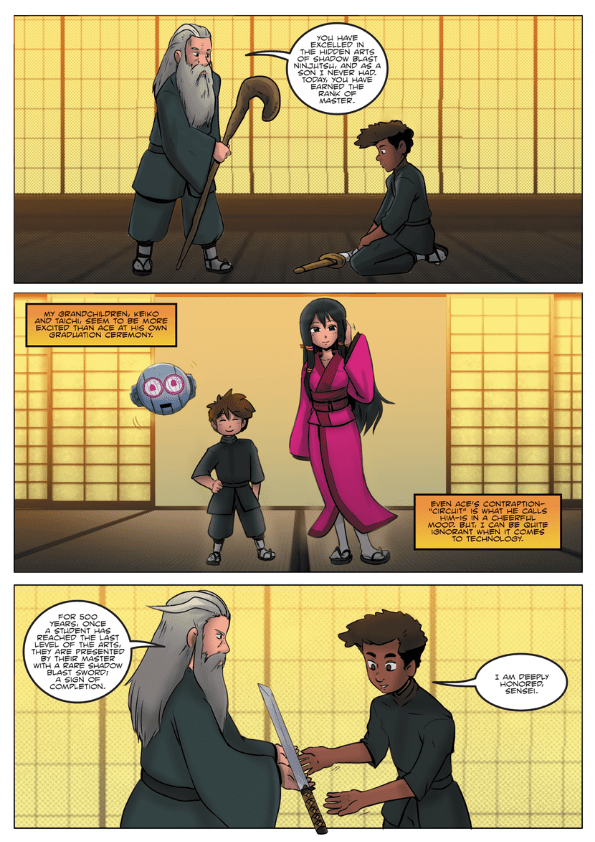 CB: What else are you learning from crowdfunding and creating through this process?

JU: Crowdfunding has taught me a lot about discipline and consistency , if you have those two in your corner you will be fine. 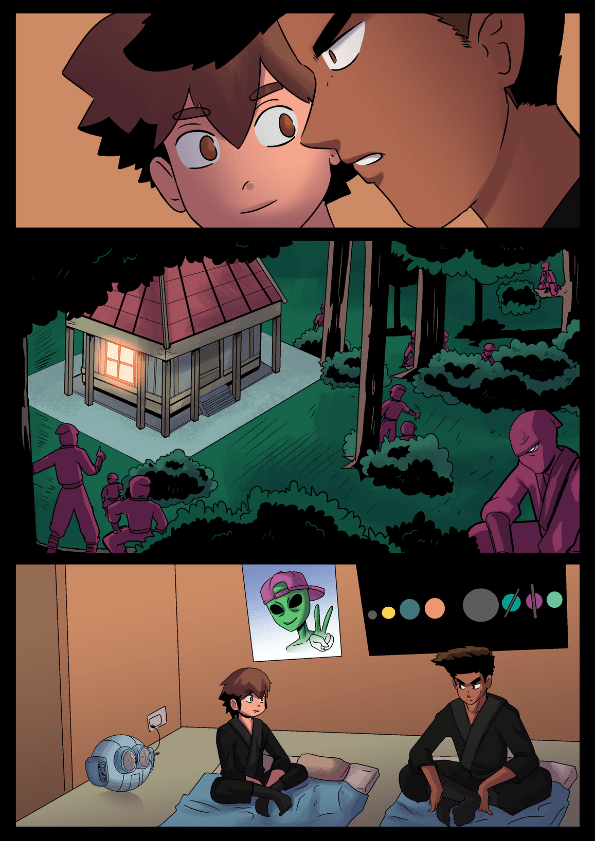 CB: Tell us a bit about your creative team / other creators that have contributed to this?

JU: Even though I am doing layouts, the final artist/inker of the book is Francis Gabriel Catindig, he is a machine when it comes to producing pages. I sketch something for him, and in two maybe 3 hours the page is done, and just like I want it. I also have Aikau Oliva de Oliveira Coasta on colors, he is another unhuman machine when it comes to producing a beautiful page in a quick manner, he is awesome. William “Bad Ankle Bill” Blankenship is another incredible colorist on the book who colored the cover and an exclusive cover, bad ankle bill is seriously a pro level artist, inker and colorist he has done work with big comic companies…. and last but mos def not least is Jason “Mutt” Williams on letters, not only does he help me with grammar and spelling lol, but he is advising for step by step in the crowdfunding aspect. He has helped me from making big mistakes. 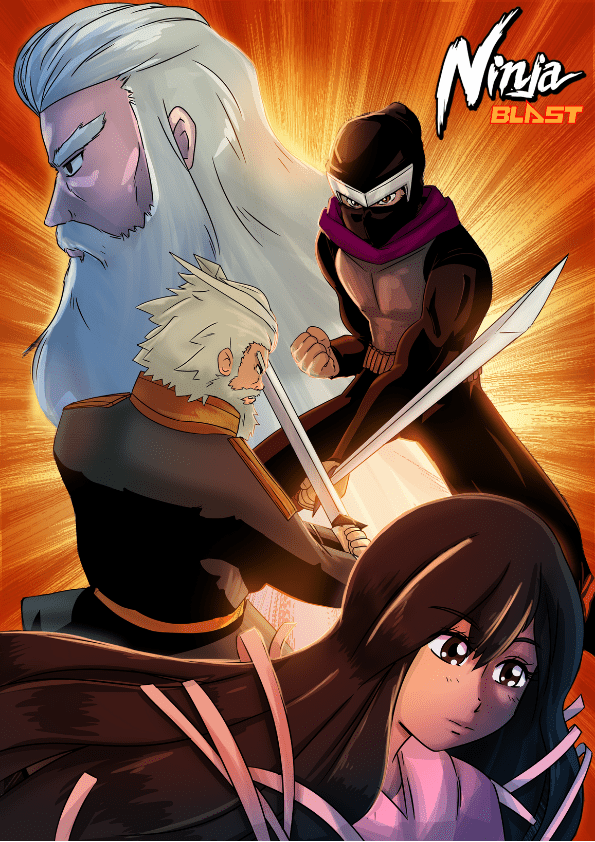 CB: Thanks for chatting with us! Good luck and we are rooting for you! Any final words?

JU: I think this is super dope that Ninja Blast has landed on a Bleeding Fool page, I love your website and always been my top source in geek and pop culture news, being a backer of Ninja Blast on Indiegogo is very awesome, but please share Ninja Blast on any social media of your choosing, thanks so much 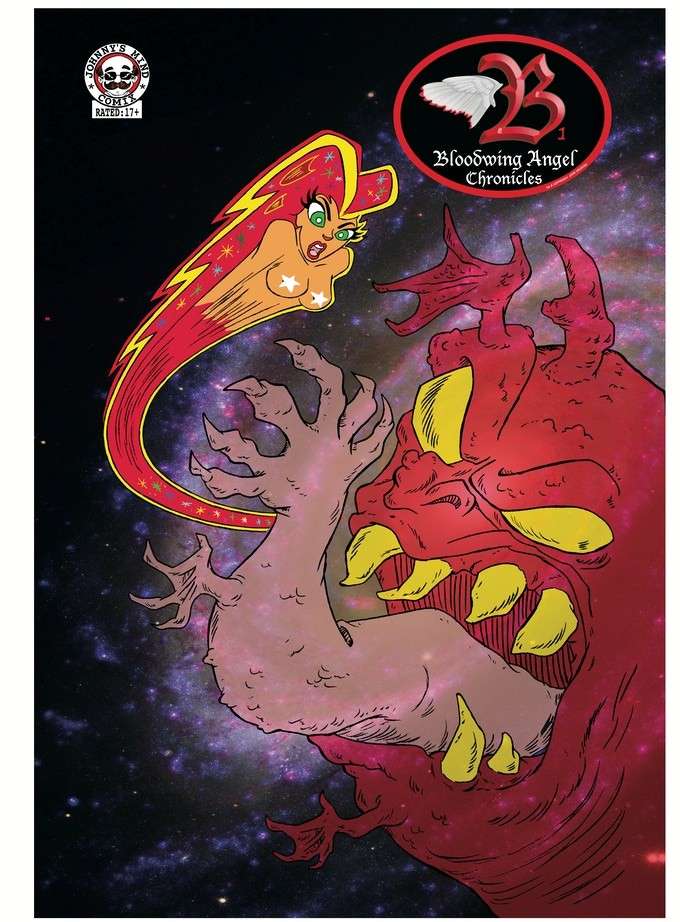 Chris Braly: Welcome back to Indie Comics Showcase, John! Catch our readers up on your latest crowdfunding effort for your Bloodwing Angel comics, John. Briefly tell our readers what’s up.

John Celestri: Ever feel like the Gods are playing with you? Like you’re a pawn in a cosmic game? Well, that’s what happens to Mychal the Bloodwing Angel! Transformed into both female and male form, Mychal is unjustly banished to the mortal realm and struggles to survive amongst demons and living dead! Along the way, Michael becomes the guardian angel to a neighborhood filled with killers and sinners. 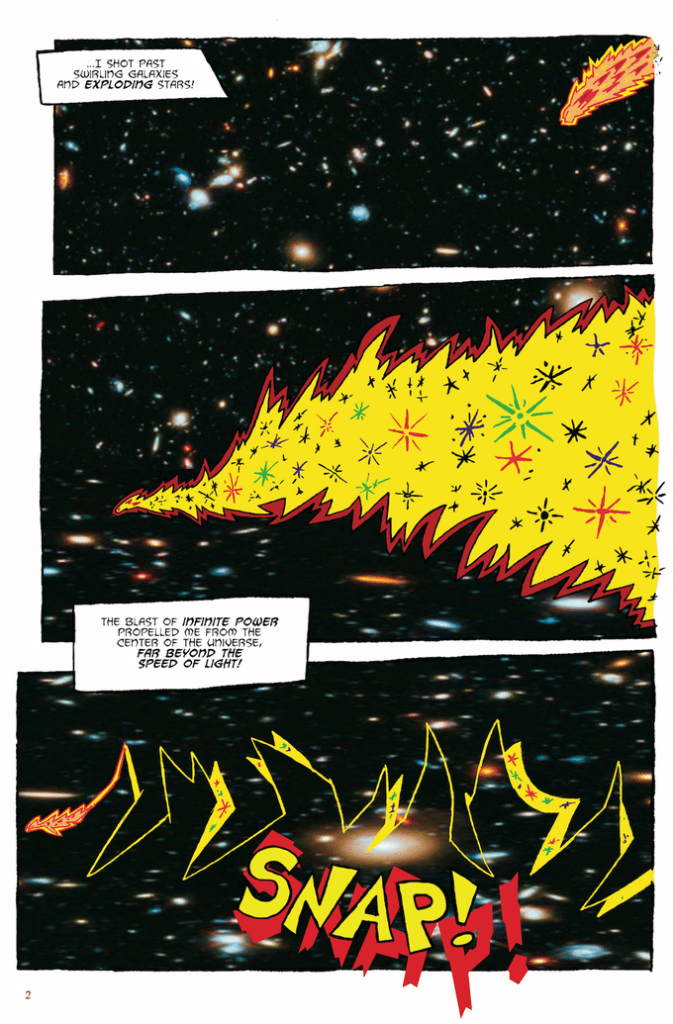 CB: You are probably best known as the animator for the best part of the Star Wars Holiday Special, the Boba Fett cartoon. Around what time did you shift to making comics and why?

JC: I always liked comic books as a kid (I’ve kept all my Spider-Man, Fantastic Four, and other comics I bought off the candy store racks back when they were 12 cents a copy). But I found that I had a particular talent to make drawings move, so I went into animation. However, I continued creating comic strip ideas and trying (unsuccessfully) to crack the syndication market back in the 1980s. Over the past 45 years, I’ve honed my dramatic storytelling talents as a writer/artist, including creating and successfully publishing crime fiction novels.
I made the shift permanently as result of the realities of today’s animation industry. In a nutshell, I’m too old for today’s producers and my talents are not valued, so I couldn’t find work.
So, I turned to comics as my creative outlet 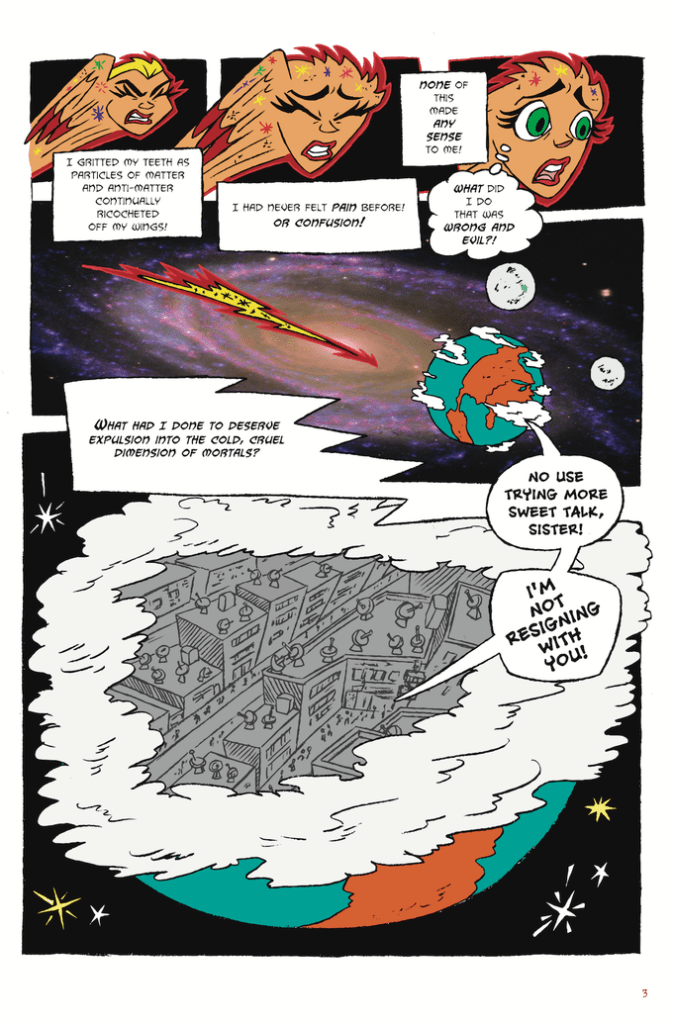 Bloodwing Angel was originally written as a novella during a time of personal and professional crisis and I was inspired by the Old Testament Book of Job. I published Bloodwing: Tearing Up The Universe on Amazon as an ebook in 2013. (https://www.amazon.com/BLOODWING-Tearing-Universe-John-Celestri-ebook/dp/B00HM8KCT2)
I then developed Bloodwing into an ongoing TV series, hoping to interest production companies; but Hollywood is too incestuous a world for outsiders to crack.
So, I decided to develop Bloodwing as a webcomic and published it weekly on my own website for a year (2018), and tried to hook up with fantasy groups. However, Bloodwing was not considered “politically correct” nor was it “Safe For Work”.

I even approached Image Comics and was turned down because “we don’t believe your work is an ideal fit for our catalog at this time.”
But since that rejection, crowdfunding comics is now a viable way to reach an audience abandoned by the mainstream comic publishers. So, I decided to relaunch Bloodwing as a printed book. 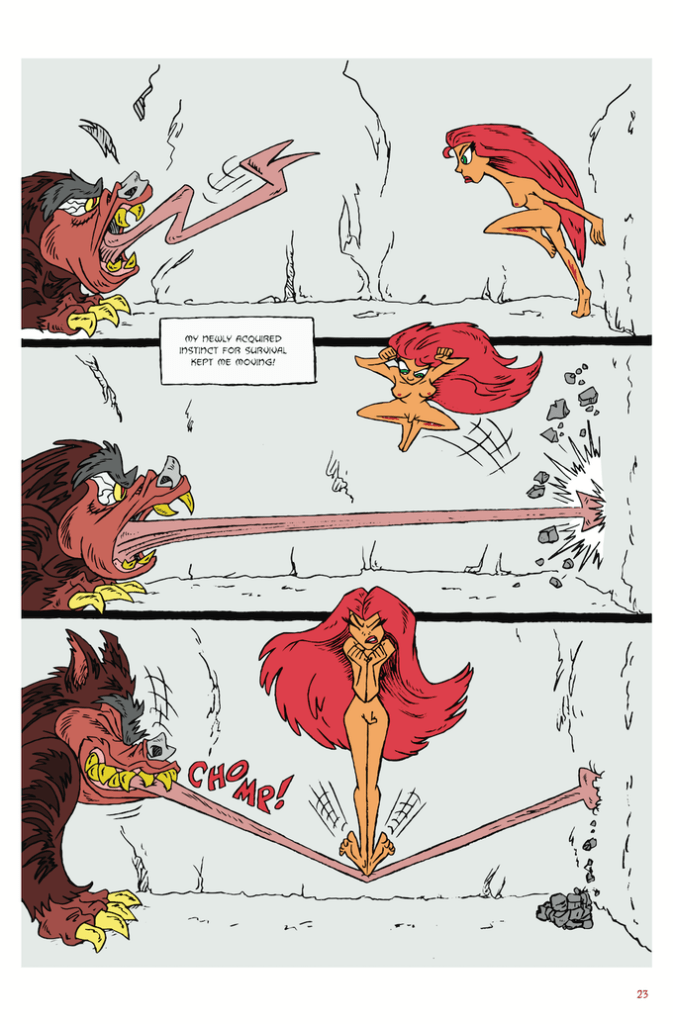 CB: You’ve created some popular kids comics too, but Bloodwing Angel is definitely not all-ages. What’s unique about this comic and why did you decide to appeal to mature audiences with this story?

JC: I want to create stories for a series that isn’t tied down to any particular genre. I want to explore character-driven stories that are also full of fast paced action, very much like Will Eisner’s The Spirit. And I want to add a series for adult comic readers who are not interested in my Snuffy & Zoey and Mega Moose books.

Laced with mature themes and handled with irreverent humor, Bloodwing Angel Chronicles is definitely not “PC”. The potential audience for Bloodwing are those mature readers who like:

CB: You successfully crowdfunded a different campaign for BW on Indiegogo, so what’s different about this Kickstarter campaign? 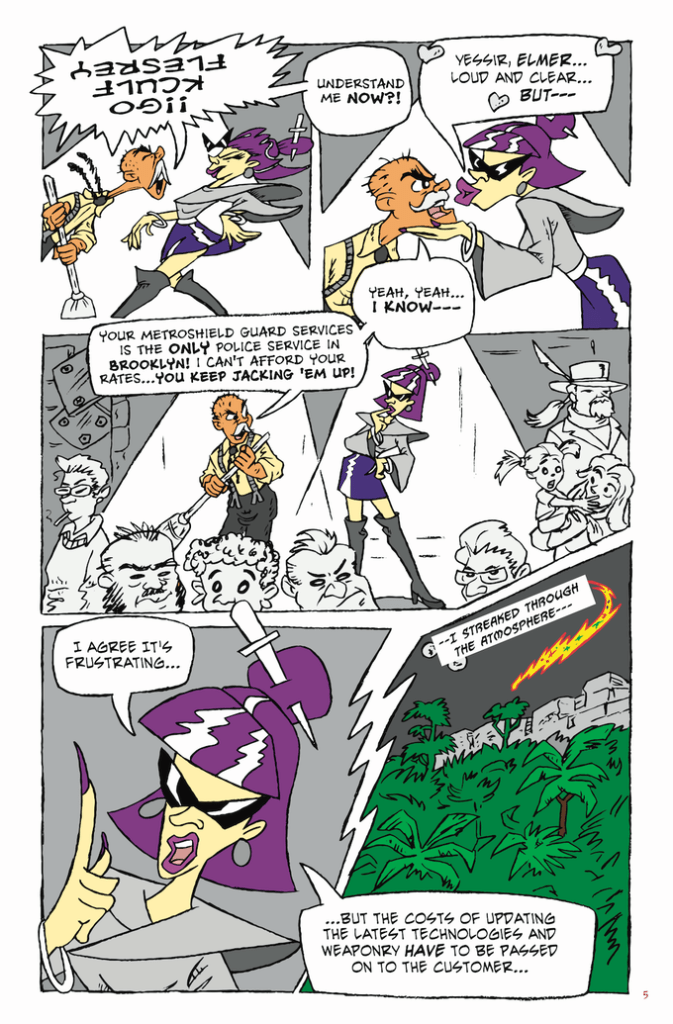 CB: What is your long term goal or hopes for this project? Are there more stories you want to tell with these characters, or is this more of a one-and-done?

JC: This is an ongoing series, which I’m scheduling to release as a 52 page/2 Episode per book every 9 months. I’ve completed Episodes 1 & 2 which will be released this June. Depending on the success of this Kickstarter campaign I plan to launch my next crowdfunding campaign this October. I’m putting the finishing touches on Episode 3 and will soon start drawing Episode 4 and a 7 to 8 page backup feature, combining them all for the next 52 page issue. At the present time I have enough ongoing story material for over a dozen episodes. That would take me thru 2023. There are so many directions Mychal’s journey can take there’s no end in sight. 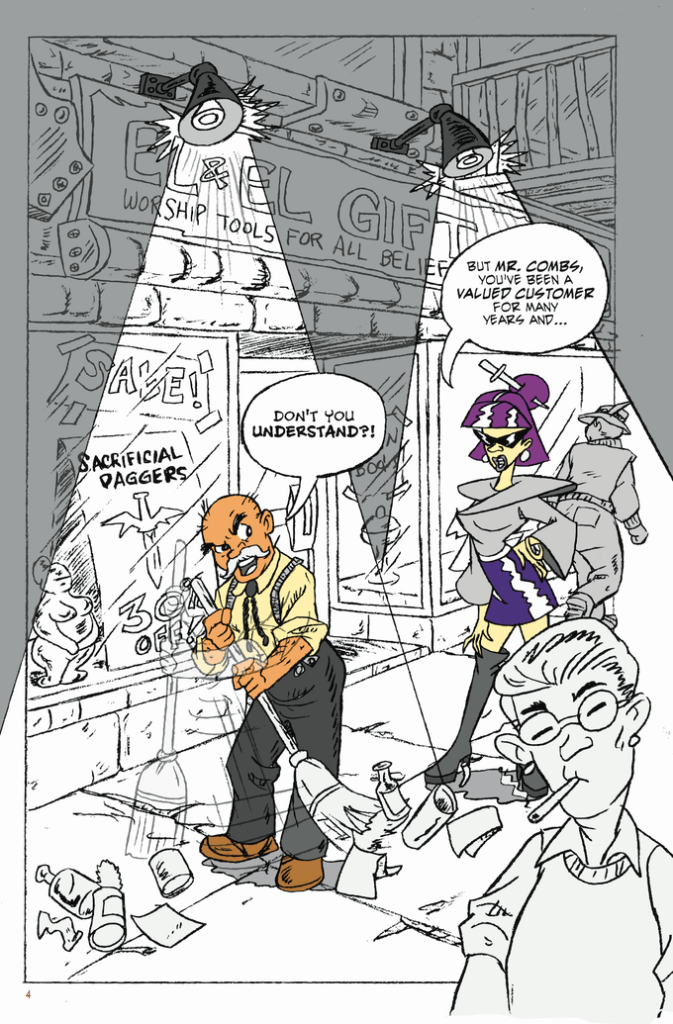 JC: Enjoy the journey, because you’re always starting a new campaign from scratch and it doesn’t get easier no matter how many you successfully do.

CB: Thanks for chatting with John! Best of luck with your latest campaign!

JC: Thank you very much for interviewing me! 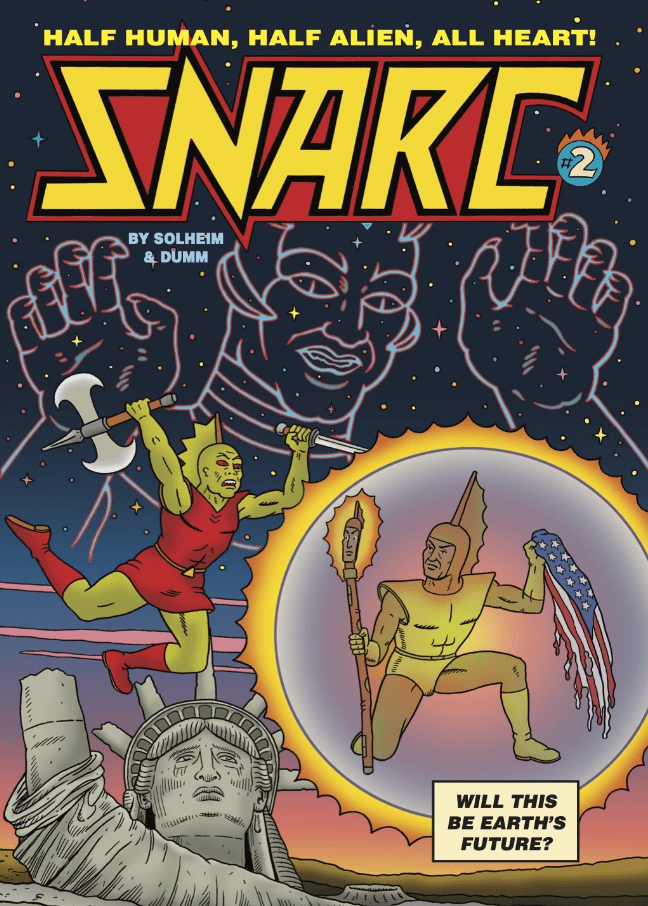 Check it out on Amazon here!

Bruce Olav Solheim: Snarc is a human-alien hybrid who has come to Earth to help prepare us for colonialization at the behest of his reptilian home planet of Maron. He is accompanied by his Cosmic Staff who wise-cracks his way through their adventures on Earth as Snarc comes to realize that he wants to save humans, not enslave them. 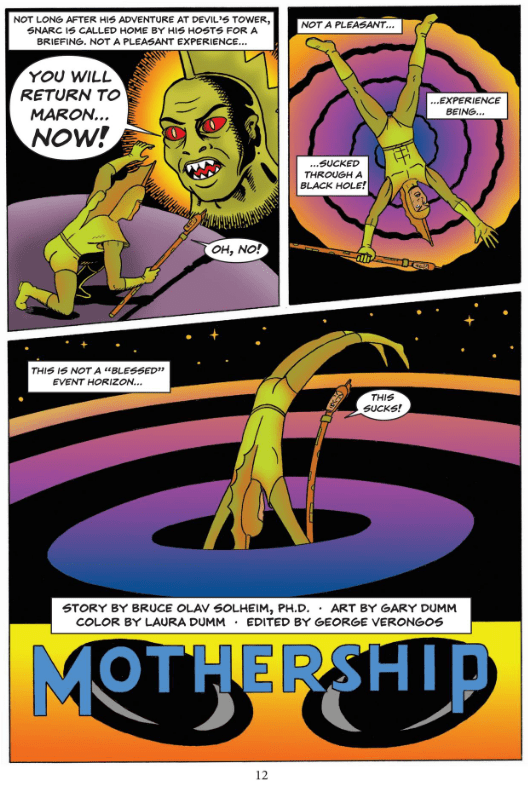 CB: How did you first get into comics and how did that turn into creating your own?

BOS: I learned to read through comic books. I struggled to learn to read, and comics saved me. I also loved to draw so I began creating my own comics as a teenager and wrote and illustrated a comic strip called Snark when I was in engineering school at Montana Tech in Butte, MT, in 1982. It wasn’t until my second eldest son Byron made a bust of Snark with his 3D printer in Janurary 2019 that I decided to create a full comic book of Snarc, now spelled with a “c.” 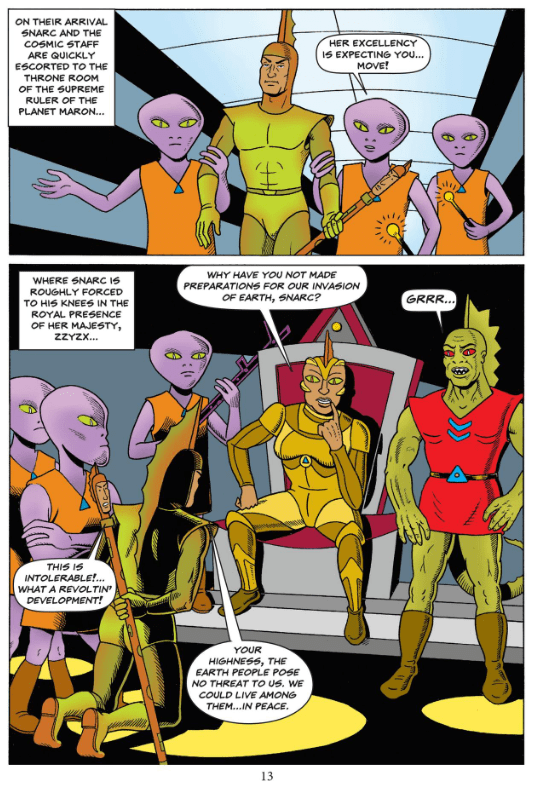 BOS: All ages. I am hoping kids and adults will find something interesting and amusing in Snarc. Also, comic fans who enjoy retro comic book illustrations will really dig Gary Dumm’s artwork. 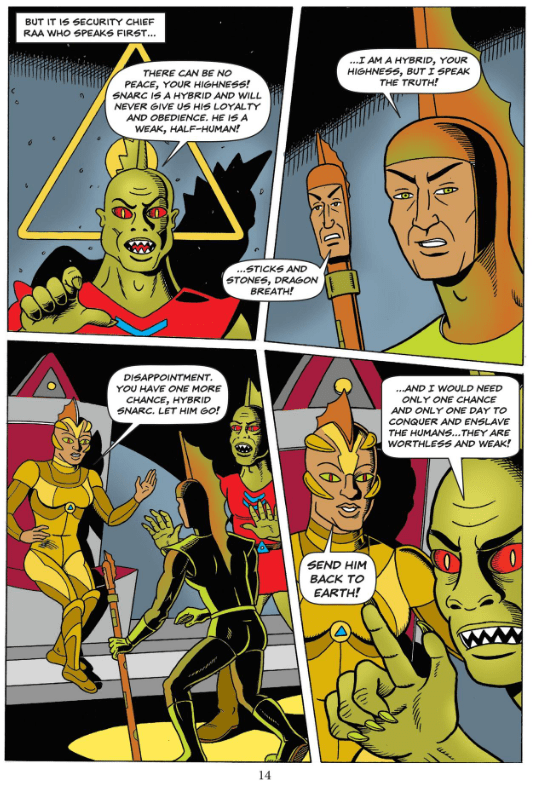 CB: Tell us a bit about your creative team / other creators that have contributed to this?

BOS: I did the story, Gary Dumm did the art, Laura Dumm did the color and lettering, and Geroge Verongos was our project editor. Gary has been illustrating comics since the 1970s and was Harvey Pekar’s primary illustrator on American Splendor. His wife Laura is also an artist who has had exhibits and has won awards for her brilliant work. George is not only a talented editor, he is also a talented writer and cover designer. 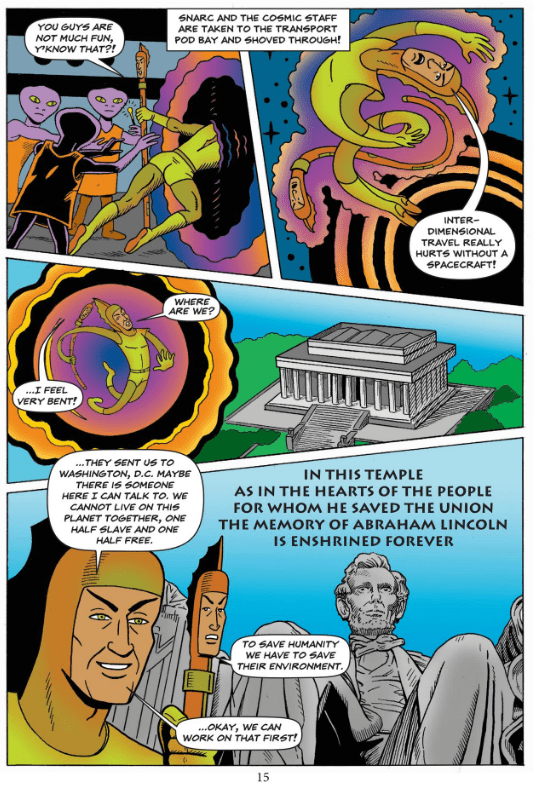 CB: What helped you decide to offer it on Amazon? Are they doing fulfillment of physical on demand for you? Are you pleased with that process?

BOS: Cost and distribution. I paid for the printing of 5000 Snarc 1 comic books and was told there is no more room in our garage. 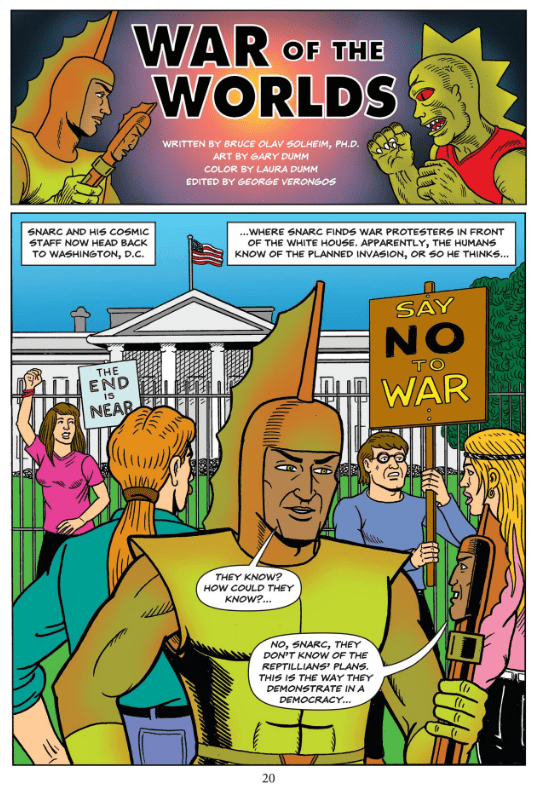 CB: Thanks for chatting with us! Any final words?

BOS: to quote Harvey Pekar, you can do anything with words and pictures. “Be the Light!” as Snarc always says.

Check it out on Amazon here!

Follow Indie Comics Showcase on Twitter at @Indie_Comics and reach out to them if you want us to consider featuring YOUR crowdfunding comic project!