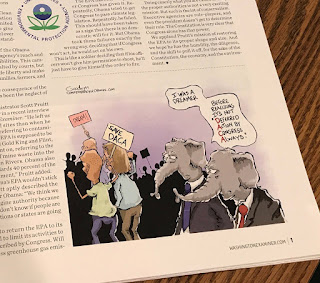 It’s been 6 years since I interviewed you for the Washington City Paper – The world’s changed a bit since then – have you?

Other than grayer hair and higher cholesterol, I haven’t changed much.  Still enjoying life in DC.  And you’re right, the world has certainly changed, some for the good and some for the bizarre.  What’s also bizarre is that the good and bizarre labels seem to flip depending on individual political perspectives.

About six months ago you started a cartoon blog with Jeff Newman where you provide conservative political cartoons and he does humorous commentary on public events.  Can you tell us how that started, and why you’re doing it? How is the reaction?

I had been wanting to try my hand at blogging for some time.  Given that the first steps at blogging aren’t really part of the creative process, but include figuring out the mechanics of blogging, the layout, and all of the key strokes needed just to get started, it stayed on the back burner for years.  Jeff’s a good friend of mine back in South Carolina and we chat often about politics.  He was actually the push to make the blog finally happen.

It was over a few beers with Jeff that the topic of blogging resurfaced.  We convinced ourselves we could manage a blog.  Isn’t beer amazing?  We wanted the theme to somehow counter the growing number of people who get their news from Comedy Central and memes.  We were both a fan of the book Confederacy of Dunces by John Kennedy Toole where people seemingly amassed in a confederacy to stymie the protagonist’s every move.  From our prospective those who simply latch on to whatever fits their world view without validation from other sources were acting like drones, hence Confederacy ofDrones was launched.

With lots of snarkiness, satire and sarcasm, we’ve been posting on a fairly routine basis since then.  Part for fun and part for sanity.  We’ve loaded over 150 posts so far. We even appreciate other perspectives and disagreement especially when opinions are backed up by facts. The blog can be found here:confederacyofdrones.com.  The reaction has been positive and we’ve enjoyed engaging with other bloggers on politics.

You’ve been picked up to do print cartoons for the Washington Examiner, which was Nate Beeler‘s home when it was a daily. What is the story behind that? Is it all new material for them?

Nate is a phenomenal editorial cartoonist.  His work was a part of my metro commute when the Washington Examiner was a daily newspaper.  I was sorry to see that daily paper go away, partly because it changed my commute routine but mostly because it was another step in the fading of political cartoonists.  Nate has been, and I’m sure he’ll continue to be, used by the Washington Examiner through syndication.

My involvement with the Washington Examiner came about because my cartooning outlet of 28 years, the HealthPhysics News, was cutting back on costs and no longer wanted cartoons.  My start at cartooning began with them back in 1989 when they were called the Health Physics Society Newsletter and ever since then I had been a regular contributor … until this summer when they let me know that they would no longer be running cartoons.  I think they felt worse about it than I did.  It’s a business decision that I completely understood.  They had been great to me over those many years and without them, it’s possible I may never have tried my hand at cartooning.

Since one door closed, I was in search of another.  The Washington Examiner, now a weekly news magazine, has its offices near mine in downtown DC.  I made contact with several people there and after they looked at some of my work, we met in person.  They were encouraging during that meeting and indicated that they’d like to occasionally use my work.  The first was in the September 18th issue.

How does it feel to have a ‘reinvigorated’ political cartoon career as a conservative in 2017?

It’s great to have an outlet whether it’s the blog or in print.  There’s so much going on and so many opportunities to identify contrary opinions to what’s happening in politics and society, that there’s plenty of motivating material for cartoons.

Even though I lean to the right and most of my cartoons have a conservative tilt, I still poke at Republicans and President Trump.  Of course many would say, and I’d agree, that those are easy targets based on recent missteps and gaffs.  Fortunately as far as US presidents are concerned, we don’t elect them for life.  Unfortunately, in the absence of term limits for congress, the country has moved too far away from the citizen politician and more toward entrenched career politicians.  You’d think with the level of political fodder available today for lampooning that the world of political cartoons would be a thriving industry.  Maybe, again, some day.

This article originally appeared in ComicsDC.
It has been reprinted with permission.