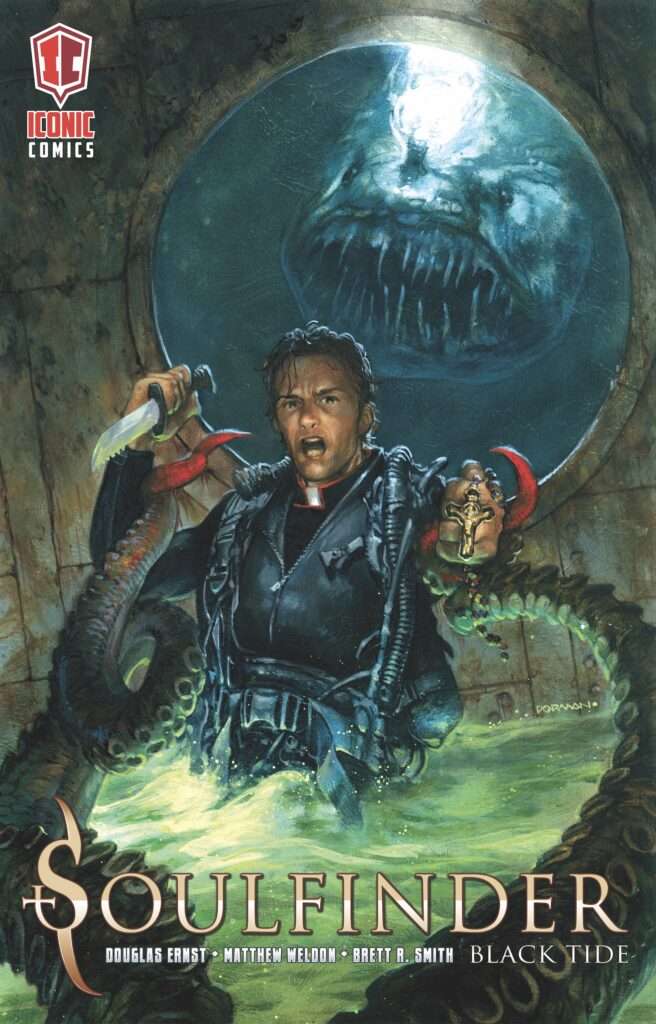 The U.S. government has a national security nightmare on its hands due to a rogue team of Navy SEALs and a disgraced nuclear submariner who have joined the cult of Blackfire. Catholic priests Father Patrick Retter and Father Reginald Crane — specialized exorcists who are part of an order called Soulfinders — are luckily willing to enter the fray. Both men, combat veterans, join their friend Detective Gregory Chua of the Steepleton, Maryland police department in a race to stop William Nebel, former Captain of the USS Seaviper, from obtaining the relics he needs to bring a demonic “Black Tide” into the physical world.

The trio must use faith, intelligence, strength, and endurance to survive challenges far from shore, at the bottom of the ocean, and within “The Abyss.” Soulfinder: Black Tide expands Father Retter’s world, first introduced in Soulfinder: Demon’s Match, by demonstrating an uncomfortable truth: “Spiritual warfare isn’t relegated to the civilian world. The promise of great power corrupts even America’s elite warriors on rare occasions.”

Chris Braly: Tell our readers your elevator pitch for the Soulfinder series.

Douglas Ernst: Soulfinder is about combat-veterans-turned-priests who are recruited to become a rare breed of exorcists. Men who have seen the horrors of war up close and personal, yet still maintained their faith, are the ideal candidates to take on a demon named Blackfire and his minions. Soulfinders are tasked with combating the immortal being and its plans to separate as many people from God as possible. 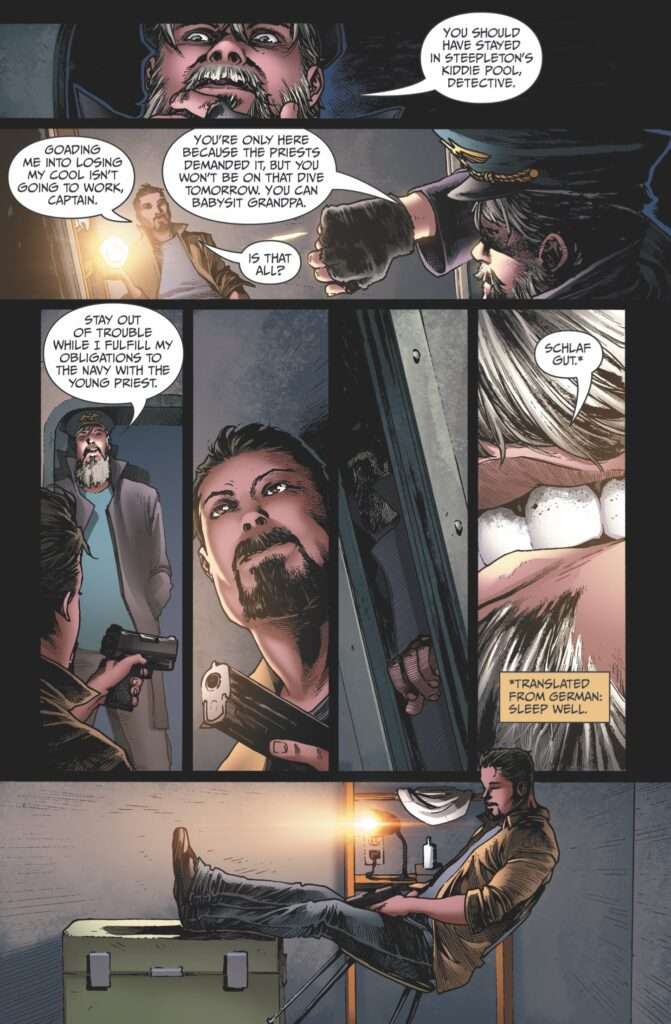 CB: You’ve been both a fan and a critic comics for many years. Did that inform your writing for this in any way?

DE: Writers should be their own harshest critic, so in that sense what I’ve said regarding Marvel books doesn’t really have an effect on Soulfinder. My guess is that a few extra eyes are scanning to see if I’ve fallen prey to the same creative pitfalls that I spotlighted in reviews. I welcome it. I wouldn’t want someone to grade my books on a curve because they’re independent. The goal is to put out finished books that are better than those offered by mainstream power-players. I’ve learned a lot from releasing the first two books. The “sink or swim” demands can be stressful, but also incredibly rewarding.

As it pertains to the other element of your question, I’d say that my storytelling is probably influenced in ways that even I don’t fully understand by Marvel Comics in the late 70s and 80s. Bob Layton, David Michelinie, Roger Stern, and Tom DeFalco come to mind. 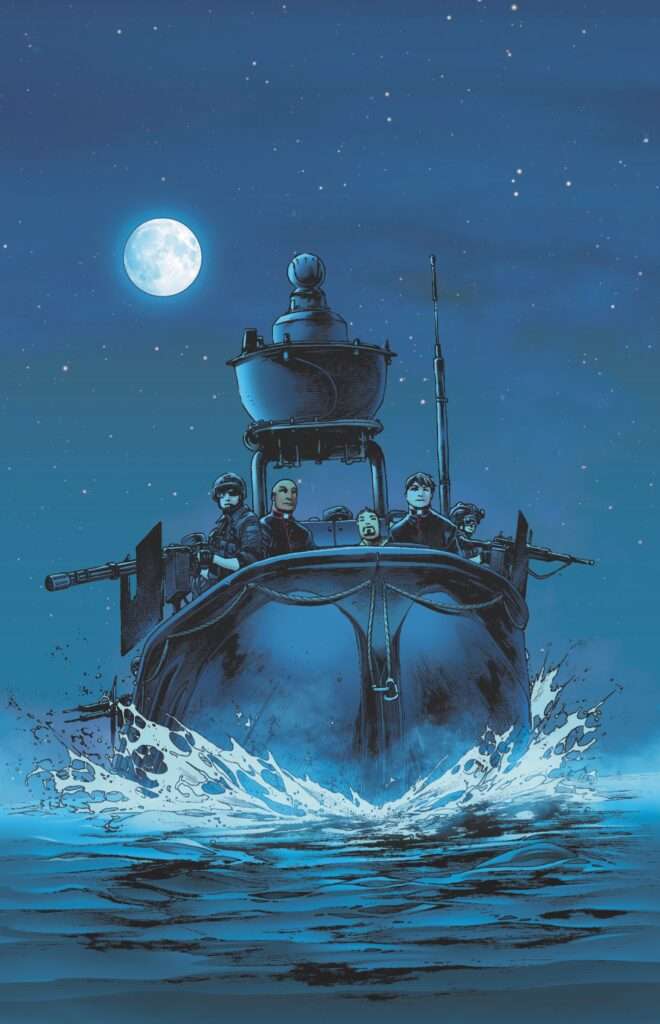 CB: Where did the idea for Soulfinder originate? And what made you conclude that comics was the best format to tell this story?

DE: Soulfinder, on some level, is a response to the critics of my blog and YouTube channel who said that I critiqued books because I would never be able to write one. I was sick and tired of books where the “good guys” were often not likable and acted in ways that were arguably worse than the “bad guys.” I wanted to write a story about good vs. evil, so pitting combat veteran priests up against demons seemed like a winner.

One of the things that I enjoy as a writer about Soulfinder is that I can tell intimate, character-driven tales, or I can tell sprawling action/adventure plot-driven tales. A story can be about evil on a very personal level, or I can zoom out broaden the scope.

I don’t really consider any medium the “best” for Soulfinder. Each vehicle for delivering the story has its advantages and disadvantages. They’re all different experiences that, theoretically, could be very meaningful and moving if I’ve done my job as a writer. I’ve been asked to write a Soulfinder novel by readers here and there, and that is something I would be happy to do on a long enough timeline. But I do love working with guys like Matt Weldon, Brett R. Smith, Bill Williams, Dave Dorman, Timothy Lim, Wes Hartman, and Vince R. Rush.

Writing novels and short stories is fun, but it’s much more of a solitary experience. I love handing a script to Matt Weldon and then seeing how he interprets my words to visually tell a story. 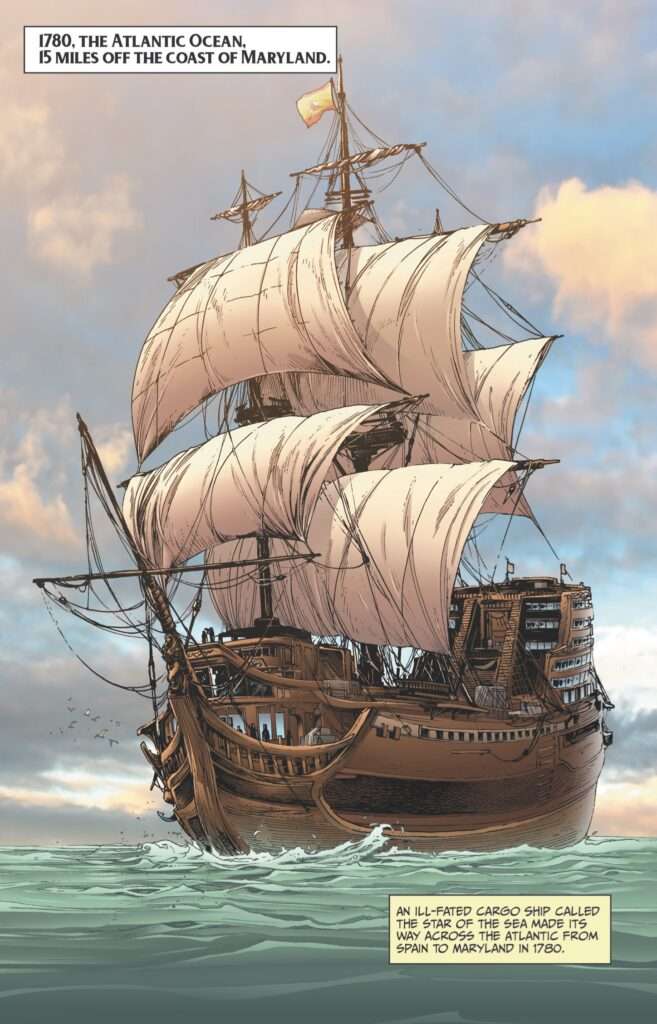 DE: The reviews I’ve seen popping up on YouTube indicate that Soulfinder readers place a high premium on storytelling. They value good art, but they expect writing to challenge them in some way. They want to give the book a second or even a third read-through and find different ideas to mull over. They don’t want comic books that are the equivalent of chewing gum that can be enjoyed for 15 minutes and then spit into the garbage. They want something that can be appreciated five, ten, or even fifteen years down the road. I might not always hit a creative bullseye with every reader, but they can tell that I’m aiming for excellence. 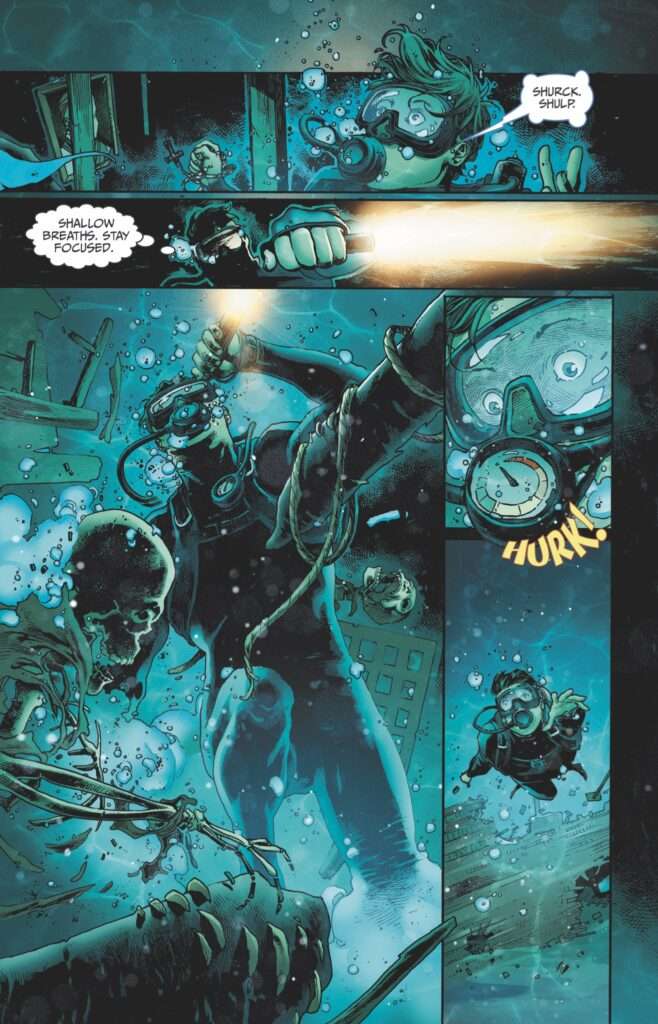 CB: I know your last installment was illustrated by Tim Lim. What led to your collaboration with Matthew Whedon?

DE: The good news regarding Tim is that he did contribute a variant softcover for Soulfinder: Black Tide. The piece is also featured in the “Dorman hardcover” and the “Weldon hardcover variant.” I was incredibly grateful that he made time in his busy schedule to contribute to the second installment.

Working with Matt has also been amazing. We met at Bell County ComicCon in 2019 and got along very well. I found out that many of the ideas and themes the series explore resonate with him and the rest is history. Soulfinder can explore some dark subject matter at times, but at the end of the day it is a wholesome book and I’m trying to stress the importance of virtue to readers. I think Matt appreciates that values that I’m trying to impart, particularly when it comes to some of our younger readers.

I recently had a dad share a picture with me of his two sons reading and enjoying Soulfinder. It was a surreal moment. The words we use each day with others are important — much more important than we often realize. If my stories are going to be read by young people, then I want to write about men who value honesty, integrity, personal courage, and selfless sacrifice. 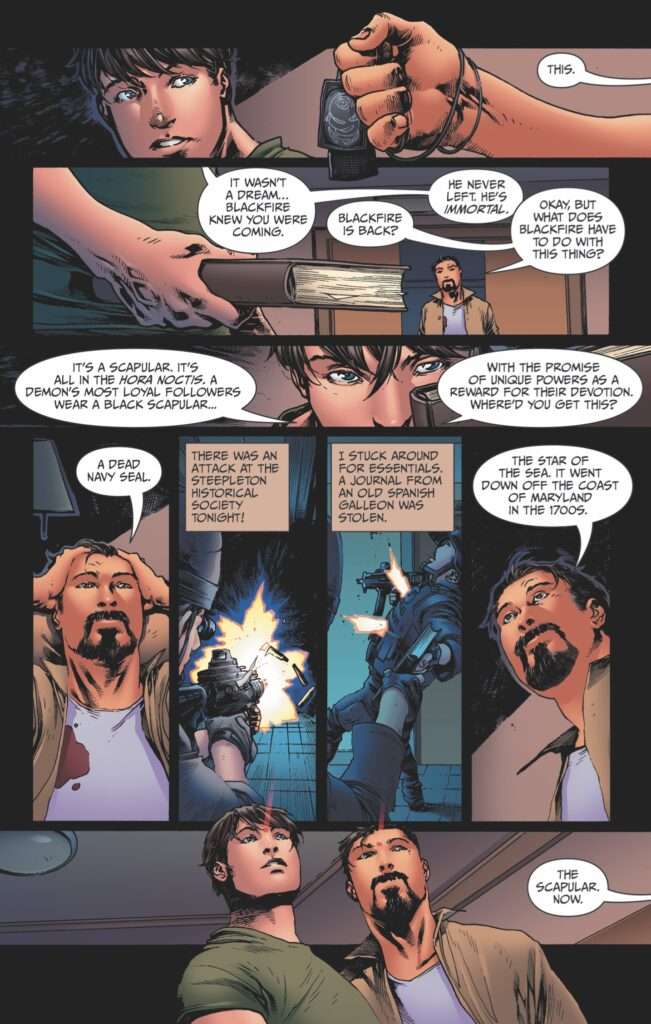 CB: What made you decide to skip the crowdfunding process this time? And what can you tell us about Iconic?

DE: Crowdfunding Soulfinder: Demon’s Match was very important in terms of getting my name out there and then ultimately establishing myself as a reliable creator once the books were delivered at a fair price and in a timely manner. People continued to buy the book on the ICONIC Comics website and review it long after the campaign was over, which suggested a high retention rate for the second installment.

If I could bring in the same amount of readers (or more) with Soulfinder: Black Tide — while simultaneously not having to share profits with a crowdfunding platform — then I wanted to give it a go. I think crowdfunding has many, many benefits, but breaking free from these companies also has its advantages. There are always trade-offs, but now I have plenty of data to examine prior to releasing the third book.

If crowdfunding platforms are the place where many people go for expensive softcover books that might arrive a year after they’re ordered, then I wanted to be the guy who offered amazingly priced hardcover books in about one week. Much of the success of the Black Tide launch hinged on happy customers sharing pictures of their books on social media just days after it was available for purchase at ICONIC. If people hated the product, it would have been a disaster. The readers have done a lot of heavy lifting in terms of promotion. I’m incredibly grateful for their continued support. 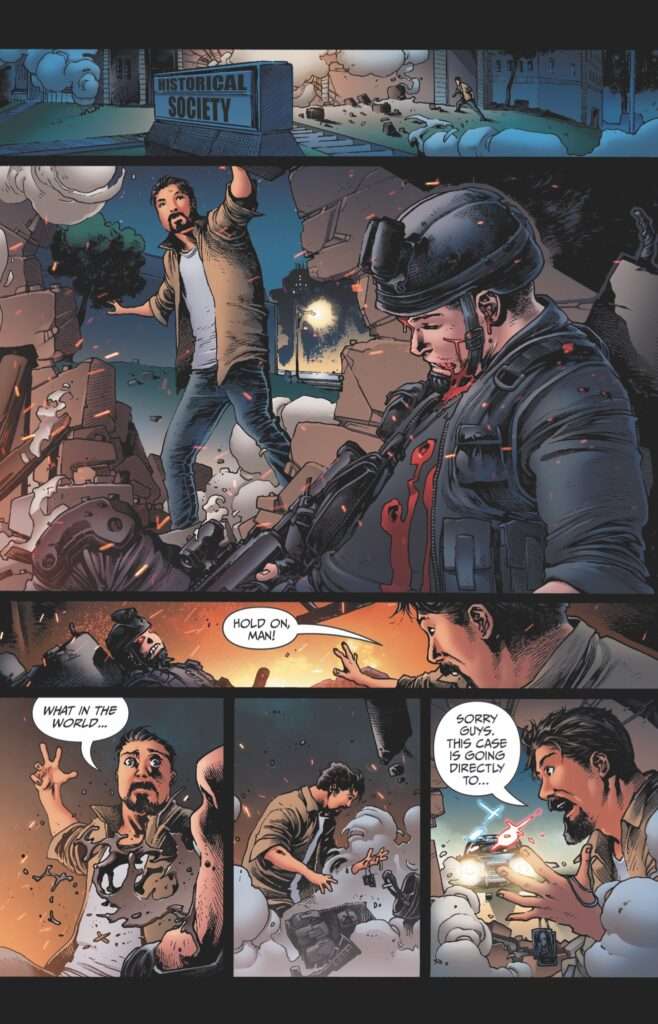 CB: Wow, Doug, isn’t it a big risk to have books pressed and in stock without ANY pre-orders? Even the big two don’t do that do they?

DE: It was a HUGE financial risk for me. Yes. I was basically betting on myself, which I’m okay with doing. But it was also a calculated risk based upon data from my Indiegogo campaign, ICONIC Comics’ internal data on sales, and my general thoughts about what the move would represent in an environment where so many people are frustrated with late or otherwise botched crowdfunds.

CB: Looks like it paid off. How can our readers get a copy?

DE: The ICONIC Comics website has Soulfinder: Demon’s Match, Soulfinder: Black Tide, our Soulfinder-inspired rosaries by Rugged Rosaries, and original artwork by Matt Weldon on Black Tide while it lasts.

CB: Good to talk with you, Doug ~ any final words?

DE:  Anytime, man. Thanks for reaching out. The only thing I would reiterate is that if people want solid storytelling and art delivered at a good price and in a speedy manner, then they should check out ICONIC Comics. There are a lot of reliable creators under one roof there and the guys involved have no intention of slowing down anytime soon.