So… Why Can’t They Just Lower Comic Book Prices?

A lot of people say that comics are too expensive. As a mass-market COMPETITIVE product, they are. Comics have effectively priced themselves out of a “casual buy”, which is where comics need to be positioned to gain a new audience of readers. But, it’s a very complex problem and there’s more to it than just waving a magic wand and lowering the cost. If the large publishers woke up tomorrow and decided to immediately cut costs in half, the euphoria that current comic fans would feel would be short lived and a move like that would tank the industry.

So what needs to be done? It’s pretty lousy to simultaneously say that comics are dramatically overpriced, and say that you can’t lower the price, but this is a reflection of the lousy position the business has landed itself in.

For some context, here’s a view of comic prices from 1991 to today. Even this chart tells a bit of an incomplete picture. You need to go back to 1979 to today (covering a full 40 years in the business) to really get a good view of what’s happened: 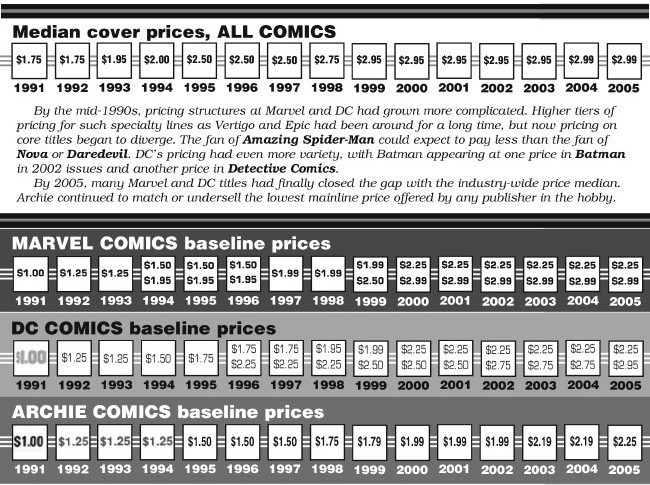 You can argue that comic pricing are priced at “what the market will bear” (which is what both large publishers have argued, and at times with growing lunacy as they attempt to draw a parallel between comics as a better entertainment investment than a full console game) but the clear evidence right now is that the market can’t bear the prices. And when you’ve built up an ecosystem around this pricing, just “changing things” isn’t easy. You can’t just “reverse prices”.

Let’s say comics suddenly were dropped to $1.99. Multiple problems immediately set in, the least of which is that the direct market instantly vanishes. Comic shops (which are struggling) would see their current revenue cut by 50%. Unless their store was already augmented by other sources of revenue… the result is a rapid collapse. Some irate fans have argued that the comic stores “deserve what they get” which is an even more ridiculous argument given that the comic shops have zero say in cover pricing or the margin. But it’s not just shops that would feel an impact.

Creators aren’t being paid millions of dollars for books either. Cut the incoming revenue and publishers would pay creators even less. And with today’s big publishers that’s scary… rates are already at a level that one could argue is below livable. Cut that in half and you would be crazy as a creator to even want to enter the business in the first place. You could expect a TON of quality cuts and outsourcing… and if you think editorial standards are bad now, imagine a world where those go away completely.

Now again, all of the above presumes that the business model (for shops and creators) stays the same… just with 50% less incoming revenue. The secret is in the fact that it’s the business model that’s more of the problem than the cover price. If you want to solve the pricing problem, you need to attack the business structure first… not the cover cost.

Alterna Comics has a model with lower comic prices, but they built themselves that way. If Alterna spent the next 5 years moving their prices up to $4 a book, then suddenly had to revert back to today’s pricing, they would implode too. Once you set your prices, you’re committed. Alterna’s business model works for them. It arguably wouldn’t work for a major publisher operating the way they are now… but it does serve as a viable template for an indie company or a new company getting started.

Image Comics on a bigger scale has also moved their prices up much slower than the large publishers… and a big reason why is that their business model, while much different than Alterna’s, works for that price point. They have more flexibility both with stores and with creators. In fact, Image has a much easier time offering returnability for new comics with their business model… something Marvel Comics and DC Comics would both struggle with built the way they are now. 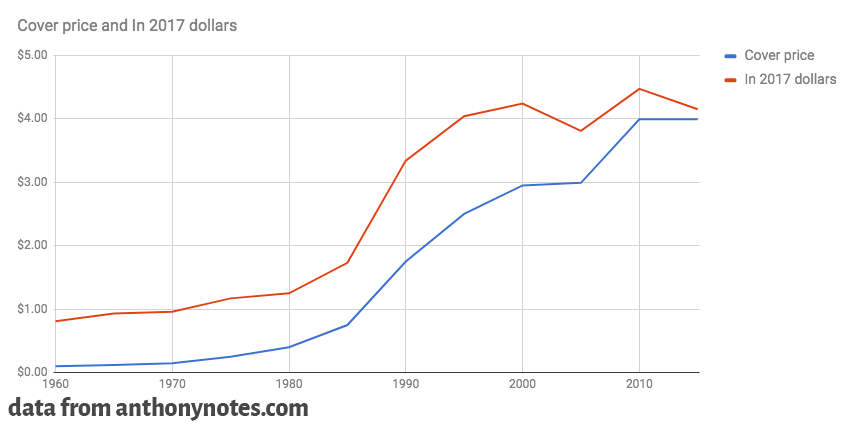 One way it would work (as some have pointed out) is that if you had lower prices you would attract more customers. That’s true! Except that doesn’t happen overnight. You would have to subsidize the market likely for years before the audience came, or find a different, huge outlet. And, you could argue, given the corporate money backing both Marvel and DC they should be subsidizing the comics given that the IP they generate lead to billion dollar movies.

Captain Marvel, despite plenty of online critics and people claiming it would tank, made over $1B worldwide. Given this revenue, WHAT IF Marvel dropped that title alone to $1.99 and accepted taking a loss at the corporate level in order to get more of the comics in the hands of the new audience they want to attract? The losses Marvel publishing would take compared to the value growth in the IP (that would benefit toys, licensing and movies) is nothing.

So why shouldn’t Marvel take a loss on the comic for a year in order to push the IP? It’s questionable if the entire year of comics sales would equal a single day of the movie… so imagine if Marvel built up the character more in the comics to hit new audiences and could increase the money where it counts… in licensing and film?

I’m not saying this is the answer by a long shot… but it’s a different way of looking at the problem. Because any kind of business strategy change or solution that is going to take some time. The longer it’s put off? The bigger hole the industry has to dig out of.

That solution has to be a reset of prices, along with changes to distribution and retainability, and different distribution channels. Unfortunately, there’s not a lot of motivation to do that.

The problem everyone needs to face is that once you solidify a pricing and business strategy, you can’t just reverse it overnight. That’s why this problem is hard. They’ve dug the hole, and now they have to climb out of it.

For more of my thoughts on the subject, watch the video below: