Marvel Comics has been on a downward trajectory in terms of overall quality and customer service for years. Under the leadership of former Editor-in-Chief (EIC) Axel Alonso Marvel replaced their entire lineup of classic superheroes with new “diverse” versions. Lowered their talent pay to increase profits, decreasing quality in writing and art. They allowed creators to disrespect and mock customers. Marvel started using bottom of the barrel paper and ink materials. The publisher became addicted to event series, reboots, and variant cover schemes and ushered in the era of SJW Marvel. Sales of Marvel Comics declined despite the MCU generating significant interest in characters. The House of Ideas needed a leadership change in the worst way.

20 months later, the promise of Marvel Comics change under EIC Cebulski is gone. There is some progress under his leadership. Marvel features a handful of great ongoing comic series like Immortal Hulk, Venom, Daredevil and Amazing Spider-Man. Marvel creators and editorial are noticeably more professional on social media and interacting with customers. With notable exceptions like Saladin Ahmed, Gail Simone and executives Tom Brevoort and Jordan White. However, a majority of Marvel’s issues when Cebulski ascended to EIC remain, and in many cases are worse.

There is a huge cloud hanging over Ceculski’s time as EIC. He isn’t actually fully in charge at Marvel Comics. Marvel Comics Vice President of Content and Character Development Sana Amanat, despite technically being lower on the corporate ladder, has far more clout than Cebulski. The Pakastani-American claims she was hired by Marvel because she has “something different to offer than the regular fanboy who has read comics since he was a kid. …she had a different voice, and that Marvel needed her voice in order to change Marvel.”

Amanat, who studied political science at Columbia University, freely admits she has no business in the comic industry. She’s the driving force behind overt racists Ta-Nehisi Coates, G. Willow Wilson, Saladin Ahmed and an assortment of diversity hires at Marvel. Despite none having the experience, talent or passion for comic books. Anyone she hires is virtually untouchable by Cebulski.

Marvel’s EIC addressed some bad apples in his sphere of influence. Cebulski reprimanded writer Max Bemis after he told readers to “feast upon his ass.” Bemis noticeably calmed his behavior after C.B. intervened. Chuck Wendig was fired after telling people to “eat a boot covered in shit” along with a host of other vulgar remarks after Supreme Court Justice Brett Kavanaugh’s confirmation. Cebulski and his staff are trying to improve Marvel’s image on social media. However, C.B. appears to be in over his head or unwilling to address a multitude of other issues he can fix without Amanat’s permission.

EIC Cebulski’s first initiative on the job was Marvel Legacy. Marvel takes fake numbering to new levels under his leadership. The mental gymnastics Marvel needed to arrive at most of their Legacy numbers is mind numbing. They included the Totally Awesome Hulk run as Incredible Hulk despite featuring a different character. Marvel counted random Thor miniseries and the JaneThor run to its Legacy number but discarded other Thor runs with the actual character. This is all done to move series featuring their most popular characters to big milestone issues like Amazing Spider-Man #800, which featured a $10 cover price and over 60 variant covers.

Marvel’s latest fake milestone is Marvel Comics #1000. DC Comics Action Comics #1000 and Detective Comics #1000 were huge financial successes, shipping over 200k issues each despite $8 and $10 cover prices. Green with envy, Marvel announced their own issue #1000. Despite the Marvel Comics series ending at issue #159 in 1957. Unable to craft a believable story for the numbering and unwilling to concede jealousy and greed are their driving motivators. Marvel Executive Vice President Tom Brevoort admits, “More than anything, it was symbolic.” The book features a $10 cover price.

C.B. inherited former EIC Alsono’s thirst for variant covers schemes as well. The company drove off so many readers they need loyal customers to buy multiple issues of the same book. Or sell retailers on the hope they can flip rare variant covers for hefty profits. Jonathan Hickman’s X-Men reboot House of X is soliciting 17 variant covers. Based on history, the number will grow to 30 or more. Marvel is also offering retailers “deep discounts”. Incentivizing small business owners to order more books than they can sell to reach limited variant cover incentive thresholds. Disgusting tactics when you take into account the epidemic of LCS’s closing nationwide. 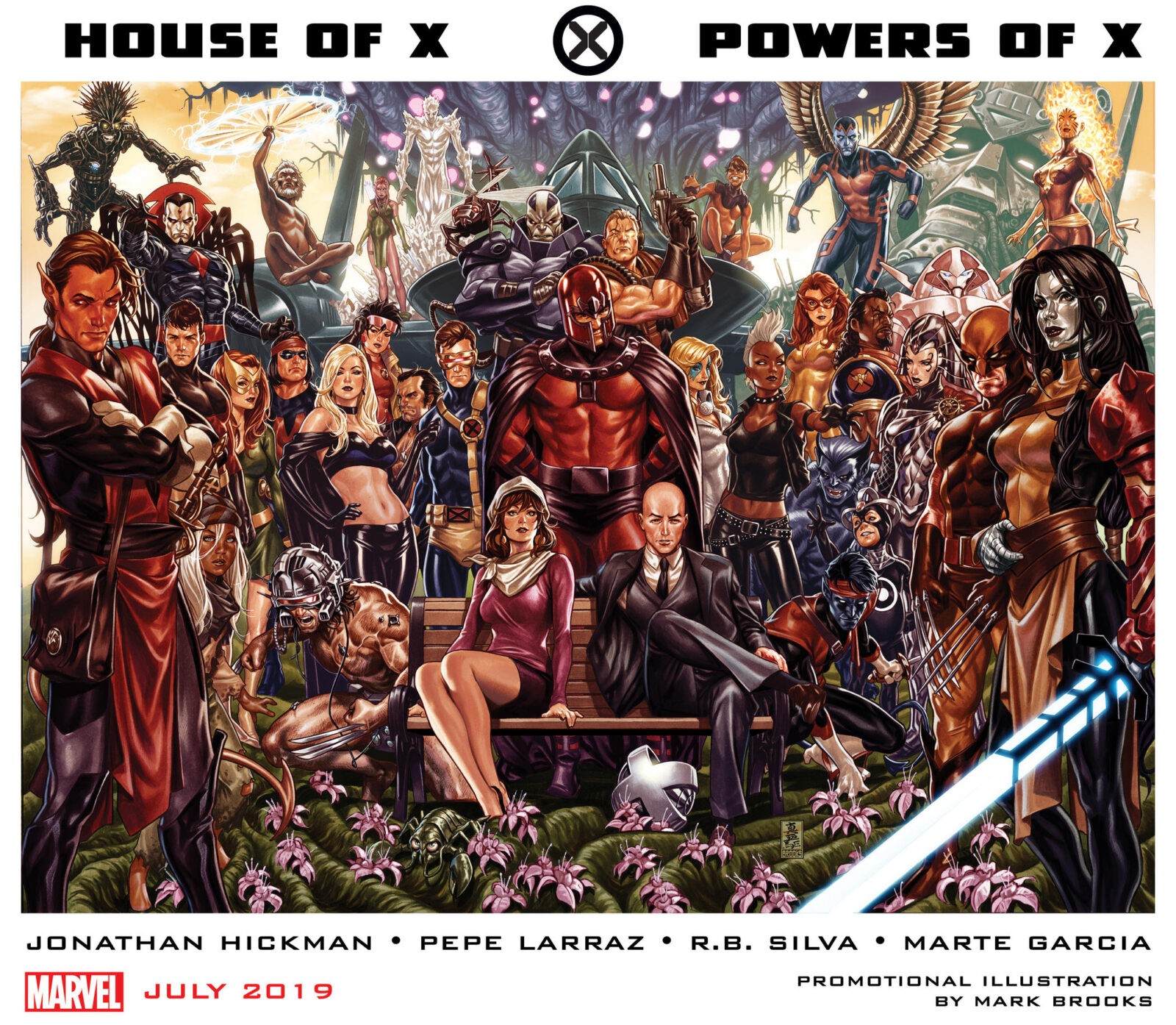 Follow Marvel EIC Cebulksi on social media and he hypes Marvel Comics from time-to-time, when he’s not talking about food. Followers quickly learn he has no feel for Marvel customer wants or needs. That includes retailers and readers.

On 3 May, he tweeted, “The last comic to sell a million copies was Star Wars #1. Which was almost five years ago. I feel it’s about time we publish another title that sells over seven figures. And I think I have an idea…”  I’m not going to get into how fake that million copy figure for Star Wars #1 is but Disney bought hundreds of thousands of copies for loot crates. On 7 May, he followed up with, “be sure to read every page of every new Marvel comic tomorrow, folks!” This turned out to be a large series of teasers that revealed creative teams for Marvel Comics fake issue #1000. The announcement was met with mocking and scorn from industry readers, retailers and professionals. Even the shill media took a dump on C.B.

He later tried claiming the 3 May Tweet wasn’t in fact referring to Marvel Comics fake issue #1000 on social media. Tweeting, “@Newsarama I don’t believe I ever said which comic I thought would sell a million copies. Please don’t assume and put words in my mouth. Thanks.” Even Bleeding Cool came to Newsarama’s defense and called out C.B. Cebulski for blatant dishonesty

In mid-June C.B. began counting down to a huge Spider-Man announcement. Fans began speculating what the monumental reveal would be. Some thought a comic adaptation of Sam Raimi’s never produced Spider-Man 4 script was coming. Others guessed it would be a crossover with the Fantastic Four. The entire industry was buzzing over the “big” reveal.

C.B. claimed in the final 20 June Tweet, “Almost time for @Marvel’s big announcement! Almost time for the comic industry’s collective jaw-drop!!” The entire industries jaw did drop in laughter when Marvel announced JJ Abrams secured a writing gig on Spidey for his son Henry. Nepotism generated zero excitement or enthusiasm for the company. Marvel EIC Cebulski is the worst hype man of all-times.

Under Cebulski, Marvel Comics can only fake so many milestones. The writing and art quality declined so much over the years most series shed readers at alarming rates. They’re reduced to an endless series of reboots to boost sales on issue #1’s. X-Men was rebooted in 2017 with X-Men Blue and Gold, later adding X-Men Red. They all flopped resulting in another reboot to the classic Uncanny X-Men title in 2018. Later, Marvel announced the entire X-line was rebooting again under Jonathan Hickman in 2019. Marvel knew this when they announced the 2018 Uncanny reboot. That’s not mismanagement, that’s flat out lying to customers on the part Cebulski and his staff.

Carol Danvers took the mantel of Captain Marvel from Mar-Vell, under the direction of Sana Amanat in 2012. Marvel Comics has pushed her as their most powerful superhero ever since. The character’s series have been rebooted nine times in just seven years. Many times with the same writer. Every time the series reboots the sales drop even faster than the last and it’s cancelled. The cycle continues under Cebulski. Marvel Comics released five Captain Marvel series during his very brief time as EIC of the company.

The constant reboots under Marvel EIC Cebulski are testaments of his laziness and likely his complete lack of marketing skills. Every issue #1 may be a jumping on point for new readers. But it’s certainly a jumping off point for customers fed up with constant reboots and overpriced issues.

Fake milestones and constant series reboots don’t fully quench Marvel EIC Cebulski’s thirst for fleecing retailers and loyal readers. Marvel continues releasing multiple pointless events annually. Age of X-Man is one the worst Marvel event in years. The rumor is, Marvel expected Jonathan Hickman to arrive much sooner. Marvel needed to generate new sales in the meantime. X-Men group editor Jordan White rebooted Uncanny X-Men, releasing it weekly for 10 issues, for the sole purpose of creating this event. It was thrown together with little planning. The final product’s quality is as abysmal as the sales. Age of X-Man is a total failure and embarrassment for EIC Cebulski.

Cebulski’s has a litany of other leadership failures at Marvel. Tanking premiere titles Fantastic Four, Captain America, Iron Man, Black Panther and Doctor Strange with incompetent, divisive and past their prime writers. Filling Star Wars comics with bottom of the barrel talents like Jody Houser, Tini Howard and Greg Pak. Continuing to employ anti-consumer executives and editorial staff like Tom Brevoort, Jordan White and Alana Smith. Flooding the market with low tier SJW-centric series that generate zero sales or enthusiasm for the company. And continuing to hire YA authors with no interest in comics, the characters or its amazing history.

Marvel Comics improved in some areas under Cebulski. Their upper-crust of comic books are very high quality. His creators, with a few notable exceptions, are more professional. But many of the issues plaguing the company when C.B. Cebulski became EIC have only gotten worse. It’s not necessarily that Cebulski wants to do a bad job or hates the customers. This was his dream job and he quickly found it was his worst nightmare.

Being subservient to Sana Amanat surely hinders Cebulski’s efforts but it doesn’t excuse Marvel Comics continued reliance on fake milestones, pricing and variant cover schemes, constant reboots and worthless events. C.B. Cebulski is likely in way over his head and doesn’t have the required marketing skills, business acumen or creativity to fix Marvel Comics. Marvel will continue shedding readers and putting LCS’s out of businesses until a competent leader who understands how to fix issues rather than maintain the status quo arrives. Likely nobody wants this more than C.B. Cebulski himself. At this point even he knows his time as EIC at Marvel is a complete failure.

For a more in-depth look at Marvel Comics under EIC C.B. Cebulski please view the video below.

World's Biggest Gaming & Sports Events to Watch in 2023
Woke Mob Attacks Taika Waititi for Years Old ‘Transphobic’ Tweets
U.S. Audiences are Growing Weary of Superhero Films & TV
The Abomination is Back: Tim Roth Discusses His Return to the MCU
Red / Yellow: Our Best Look Yet at Daredevil's Disney+ Costume
Get Woke... Disney's Stock Now One of Worst Performing of the Year
M-She-U: Marketing Superheroes to Women is What's Killing Marvel