Marvel Comics has a new variant cover problem. Their predatory practices continue damaging the industry, drive readers away and put stores out of business. Marvel’s latest unannounced “bloody” variant cover scheme is much different than predecessors. Many local comic shops believe it’s their dirtiest trick yet. Putting shop owners in an impossible dilemma of choosing between their very own customers. Some retailers went as far as not distributing them to loyal readers and even shorting customer’s pulls. 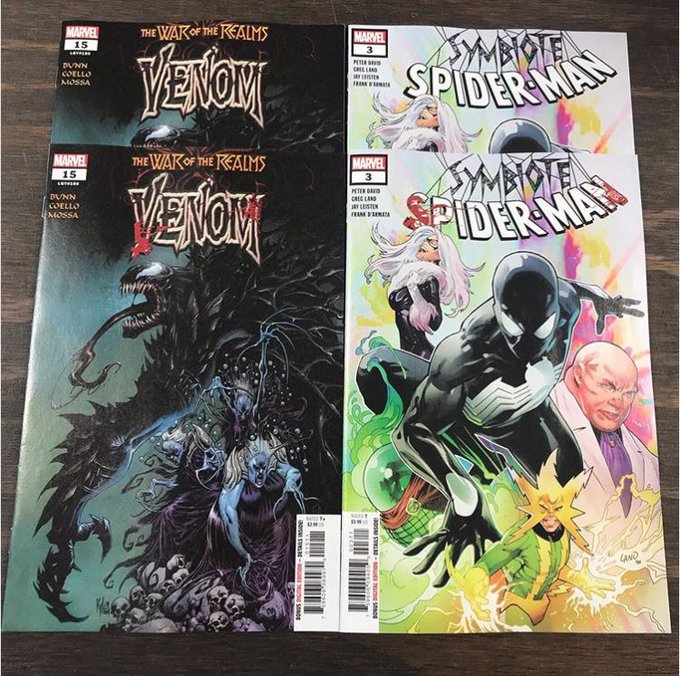 Comic book variant covers are nothing new to the industry. First arriving in the mid-1940’s with Buster Brown Comics. The first modern variant cover was 1986’s Man of Steel #1. The money-making idea didn’t immediately hit with readers or publishers. There were very few variant covers from 1987 to 1989. The comic industry was entering a boom period at this time. The Wall Street Journal and other publications began writing articles identifying comic books, especially the rare variety, as good investments.

Soon speculators flooded the market, buying comics as investments. It normally takes time for comics to grow value on the open market. Marvel, DC and a host of upstart publishing houses began manufacturing new, rare books to meet the new demand. Speculators, who didn’t read comics and knew nothing about the industry, eagerly scooped them up. Prices for books like Superman #75, Spawn #1 and X-Men #1 skyrocketed despite enormous print runs. The comic bubble burst around 1994. Speculation on manufactured collectible comics, like variant covers, was a huge factor. Many were stuck holding books they ventured thousands of dollars in, worth a tenth of their investment. Speculators abandoned the comic market. The comic book industry almost folded entirely.

Despite playing a major role in the collapse. Variant covers never went away after the comic market eventually stabilized. In fact, their presence in the market has only grown. They’re aimed more towards collectors rather than speculators in today’s market. Over time variant cover incentive ordering schemes became major marketing gimmicks. Nobody uses this more tool more than Marvel Comics. They regularly distribute 50 or more variant covers for milestone issues and major title reboots. DC Comics plays the game as well, releasing over 80 different variants for Detective Comics #1000.

Variant covers can be great for the industry when used judiciously. DC’s current A/B cover system is great. The A cover normally features a teaser for the books content with the series trade dress. The B cover is a terrific art piece of the title character with no trade dress for readers more interested in the art itself. This is how variant covers should work. Consumer choice is good business practice.

The comic industry’s current variant cover strategy, led by Marvel Comics, is much more predatory in nature. Comic collectors are notoriously anal-retentive. Many are completionist collectors. Wanting continuous runs of their favorite titles with every cover released. In 2017, Marvel released their newest X-Men books Blue and Gold. For the launch they created variant covers featuring remastered Jim Lee art. Retailers needed to purchase 1k copies for access to these variants. Making them extremely rare from day one. The price tag was immediately $1k for these books. These marketing gimmicks burn through even the most ardent readers eventually. Marvel Comics is currently testing their newest variant cover marketing scheme.

But the cover isn’t the only thing different about these comic issues. They also feature 1-page tie-in stories to Absolute Carnage written by Clay McCleod Chapman and illustrated by Francesco Mobili, Alberto Albuquerque or Gerardo Sandoval. The 1-page promos don’t stand out as particularly interesting but exclusive content is important to comic book readers.

Releasing secret variant covers with exclusive content randomly is a terrible marketing ploy. This is likely the brainchild of David Gabriel, Marvel Comics VP of Sales. Marvel EIC C.B. Cebulski didn’t think this through before implementing it. Second, third and fourth order effects of this promotion are putting retail owners and shop managers in a terrible position.

I’ve seen reports of shops stating they received as many as a 50% “bloody” variants to as few as 10%. Comic readers are a fickle bunch, they know there are books with extra content. Retailers are finding it virtually impossible to sell books without the Absolute Carnage tie-ins. Shipping issues randomly created indiscriminate winners and losers on the market. Stores that received the fewest “bloody” variants are stuck with a glut of unmovable stock now. And that’s just the effect on retailer pocket books. The most damaging consequence of Marvel’s latest scheme is between shops and their actual customers.

Most LCS’s order based on sub counts. Larger numbers of pulls mean more interest and larger orders for shelf display and stocks. Most comic retailer don’t orders comic issues at 2.5 times sub count. The industry norm is closer to 1.25 or 1.5 times sub count. Meaning if a store has 50 subs for an issue they order between 60 and 75 copies total. Marvel randomly shipped 30% of the secret variants on average. Most retailers don’t have enough “bloody” variants to distribute to customers with pulls.

Marvel is forcing shop owners and managers to choose which longtime customers receive sought-after books with extra content. There’s virtually no way to do this without upsetting some, many or possibly even all their most important customers. Effecting retailer bottom-lines with non-stop variant cover and incentive ordering schemes, over shipments of product they can’t sell and chasing readers away with non-stop reboots and events is one thing. Marvel putting retailers in a no-win situation with their most loyal customer’s is publisher malfeasance. Not all retailers are the victims of Marvels latest variant cover scheme.

When word got out “bloody” variants contained extra content many retailers took them aside, pricing them at $10 or more. Firsthand accounts indicate some retailers didn’t have enough regular covers to fulfill all customer subs. Some chose to short customer pulls and sold preordered books at marked up prices. This is detestable behavior on the part of owners and managers who partook. Customers agreed to buy those books sight unseen. Not honoring agreements is repulsive, greedy business.

Marvel Comics latest variant cover scheme from C.B. Cebulski and David Gabriel generated buzz. Which was the point. However, it was very short-sighted and executed extremely poorly. Retailers who contacted their Diamond reps were told this is a new strategy Marvel is testing. Expect more unannounced variant covers with extra content moving forward.

What are honest comic shops supposed to do? Order 2.5 times sub counts to meet customer’s needs? Make another round of impossible choices on which loyal customers do and don’t receive sought-after variant covers? Marvel is putting them in an untenable position. Marvel Comics needs to work with retailers and make this equitable before moving forward with this new strategy.

Demand for “bloody” variants and their extra content is extremely high. Aftermarket prices are very healthy. But they also put retailers in a terrible bind. There’s virtually no interest among readers for regular books without extra content. Retailers are having fits trying to move them. Worse, shop owners and managers had to choose which of their most loyal customers receive them. It’s impossible to please everyone. There’s no right way to decide which subs receive which secret variants. Much worse, some retailers sold their most loyal subs out for short term cash and didn’t distribute “bloody” variants, despite not paying a penny more for them. Loyal customers screwed by greedy owners and managers should strongly consider a new place to do business. You can’t trust anyone who sells their own customers out for short term money.

For more information regarding the variant cover schemes and the controversy surrounding Marvel’s “bloody” variants please see the video below.