July’s comic book industry sales numbers are in and once again it’s mixed bag. Overall July comic books sales outpaced 2018 but not by as large a margin as expected with an extra shipping week. Graphic Novel sales are up huge compared to last July, which were very soft. Marvel had a terrific month, occupying the top two sales slots with X-Men titles. Marvel’s stranglehold on market share continues midway through 2019. DC released 36 more new comic books compared to last month but didn’t see much sales return, if any, on market investment. 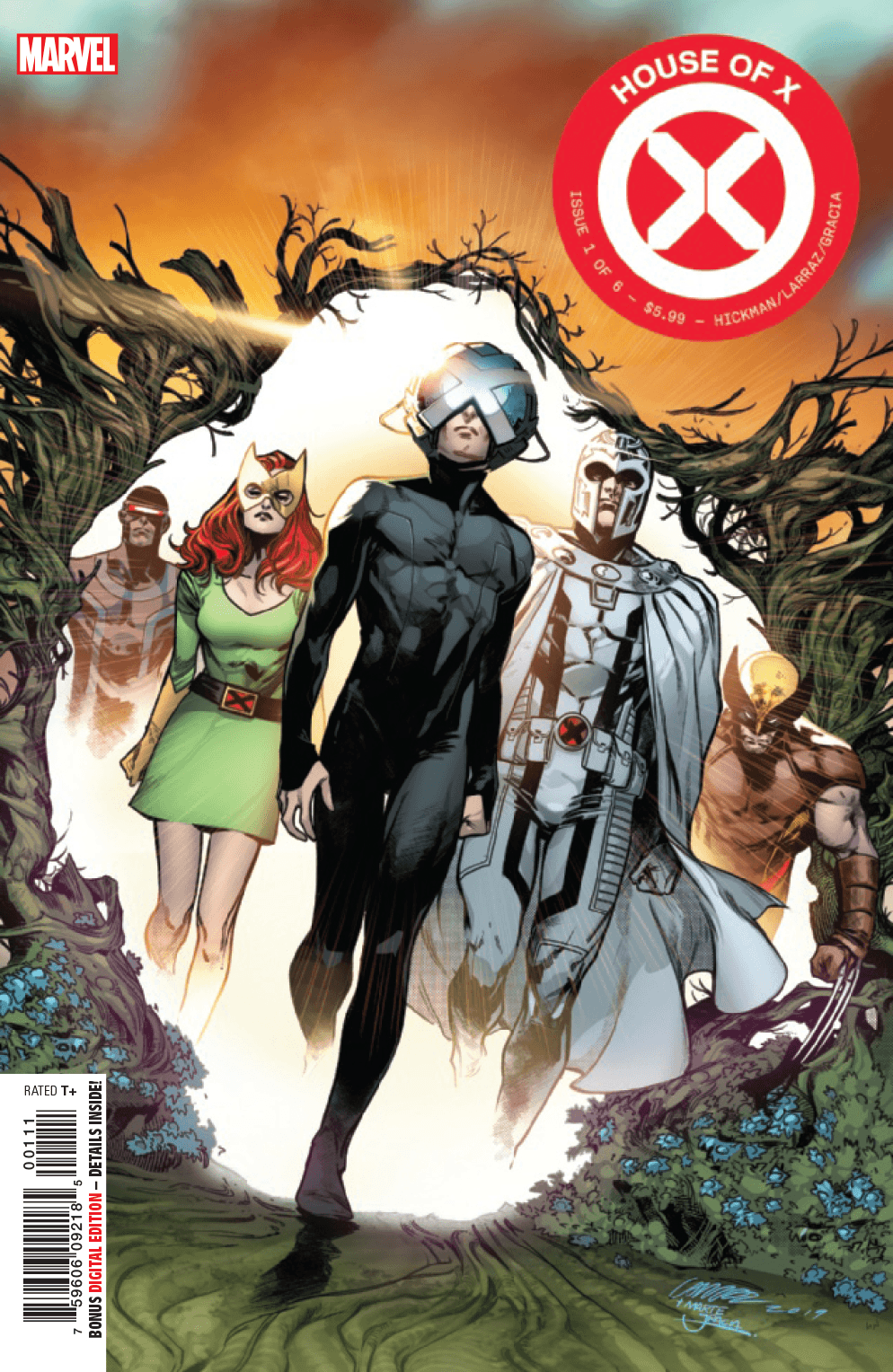 Despite having the top selling graphic novel (Brian Azzarelo’s The Joker) DC Comics dollar sales are down versus July 2018, which featured the release of Batman #50. DC’s new releases jumped from 50 in June to 86 in July, it’s most new comics since January. Indicating they may be changing course after announcing austerity initiatives due to an industry-wide shortage of quality art talent. Thus far DC Comics has published 92 fewer new comics and 18 fewer graphic novels in 2019 versus 2018.

DC Comics released card-stock variants for an additional dollar on cover price for many titles in July throwing some sales numbers off. On the surface it looks like Batman #75, the first issue of ‘City of Bane’ shipped only 70k issues, suffered a 5k drop from issue 74. In reality DC shipped 30k units of the card stock variant, meaning Batman #75 actually shipped over 100k issues total. Its best total since late 2018.

DC was paced by miniseries DCeased, shipping 130k total issues counting card-stock variants. Batman: Last Knight on Earth #2, Batman #75, Batman: Curse of the White Knight #1 and Batman Who Laughs #7 were all in the top 10 comics by units shipped for July. 7 of DC Comics top 9 comics shipped are Batman titles. Brian Michael Bendis’ Event Leviathan dropped from a soft 74k opening on issue one to a depressing 53k units shipped for Event Leviathan #2. DC had to be expecting a much better performance from one of their perceived A-list talents. 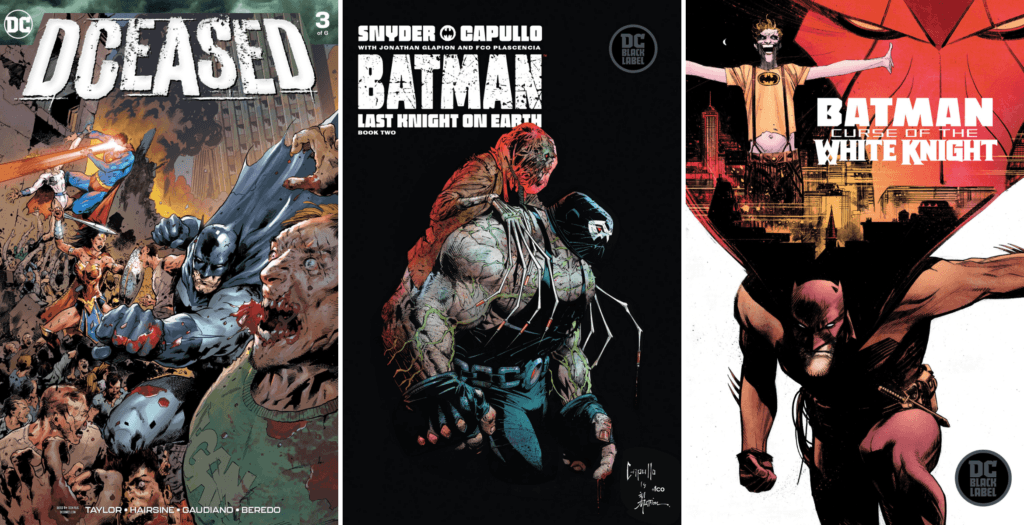 DC Comics released five #1 issues not counting Annuals. Batman: Curse of the White Knight was the third best-selling debut issue behind Hickman’s X-Men books. Lois Lane was the only other #1 to ship over 40k issues. DC also began releasing the original Superman, Batman and Wonder Woman stories from their Walmart exclusive 100-page Giants in July. Bendis’ Batman Universe opened with a respectable 36k unit sales while Tom King’s Superman: Up in the Sky moved 28k floppies. 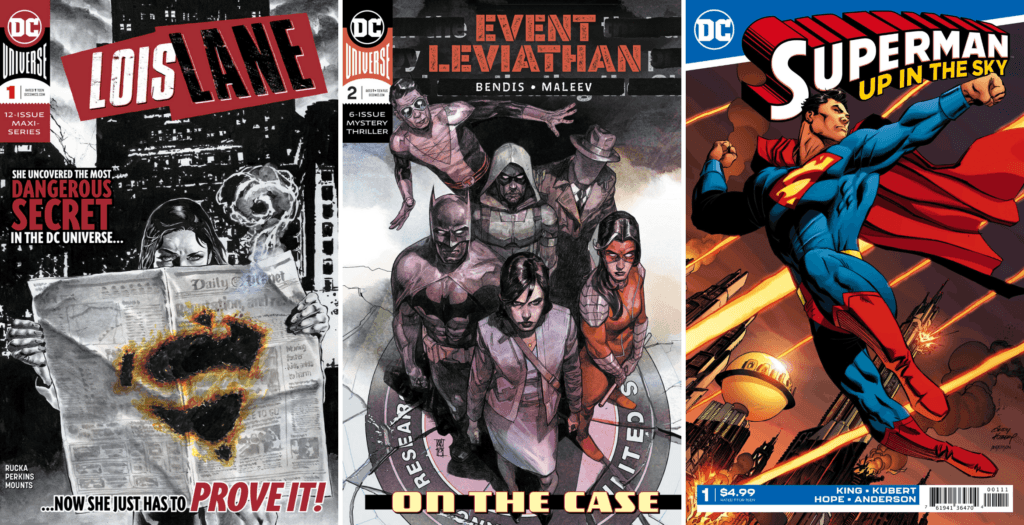 DC needs ‘Year of the Villain’ led by Joshua Williamson’s Batman/Superman to hit like 2017’s Dark Knights Metal. Otherwise they don’t have much new of note releasing in the near future.

Buoyed by Jonathan Hickman’s long anticipated X-Men relaunch Marvel Comics July sales are up 13% compared to 2018 (led by Nick Spencer’s Amazing Spider-Man #1) and 8% total year-to-date. They’ve produced 118 more comics this year than last but only one more in July despite an extra shipping week. Marvel’s market domination isn’t likely to be challenged anytime soon. The launch of Hickman’s X-Men, August’s highly anticipated Absolute Carnage and the two best-selling ongoing series in the industry, Amazing Spider-Man and Immortal Hulk, has Marvel in an envious position moving forward.

For the first time since 2001, two X-Men titles were the top selling comics in the industry. At one time a regular occurrence. Jonathan Hickman’s new X-Men direction has the entire comic book industry buzzing. Marvel also placed Amazing Spider-Man #25 and Black Cat #2 (showing surprising staying power) in the top ten comic units shipped. Between Hickman’s X-Men, Amazing Spider-Man, Immortal Hulk and possibly Black Cat, Marvel has a tremendous amount of momentum. They also features a diverse array of titles and characters in their upper crust, a stark contrast from DC Comics complete reliance on Batman and event books. 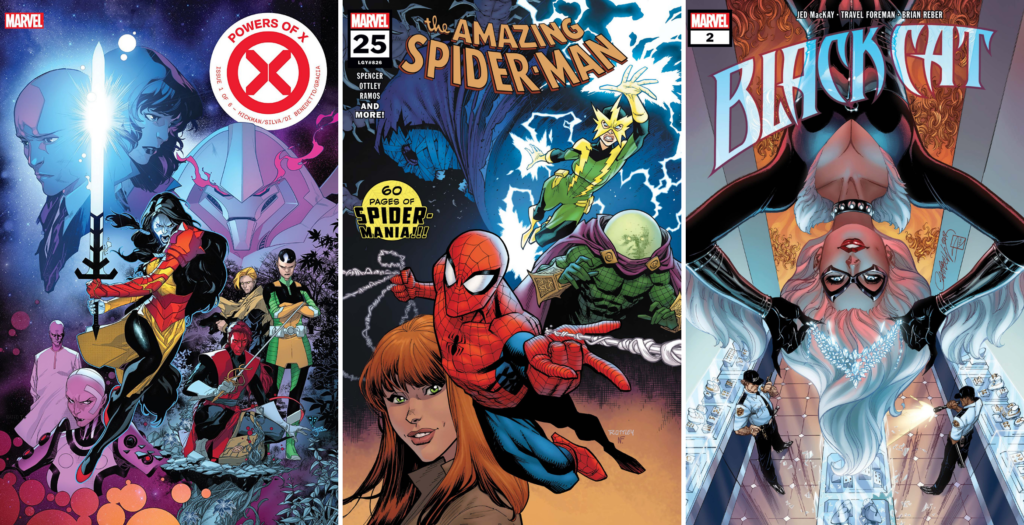 Marvel Comics published 22 new #1’s not counting annuals and vintage reprints. Several were over shipped ranging from slightly (Aero) to two or three times orders (Invisible Woman and Loki). Marvel has to be disappointed by the performance of Valkyrie: Jane Thor #1. They invested a heavy amount of real estate in War of the Realms to launch the title and it only shipped 42k issues and even that was stuffed by over ships. 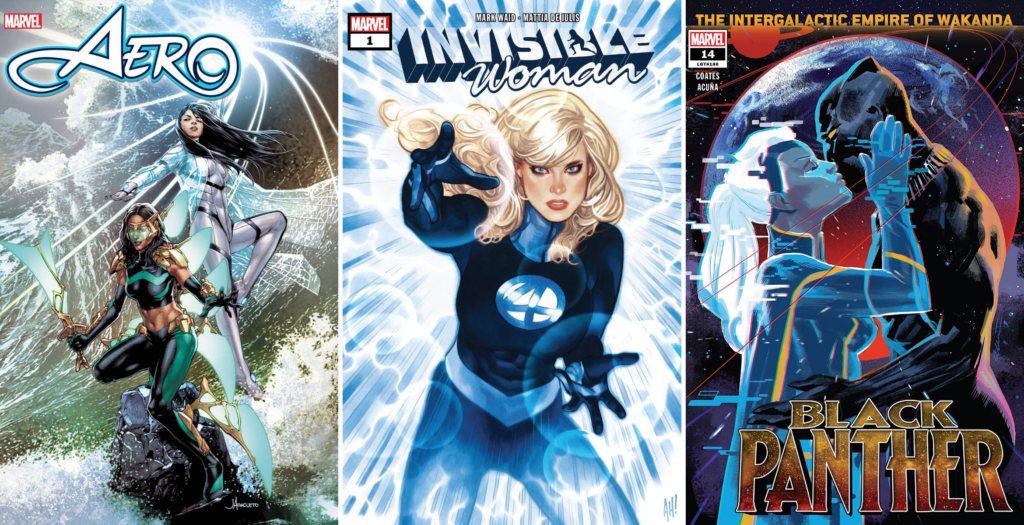 Other sales numbers of note include Tony Stark Iron Man shipping an anemic 30k, Black Panther struggling at 23k units moved and Ironheart and Shuri moving Indie-like numbers at 10k each. Marvel could really boost sales by moving on from the old guard of Dan Slott and Mark Waid and failed experiments like Ta-Nehisi Coates, Ironheart and Shuri, among others.

Marvel’s August features the start of Donny Cates’ Absolute Carnage event and an array of 80th anniversary specials including the fake milestone Marvel Comics #1000. The way Marvel is positioned at the top right now Marvel Comics #1000 can flop and they’ll still dominate. And all indications are it’s going to move very well.

Robert Kirkman and Image Comics moved huge numbers for The Walking Dead Finale. 111k units shipped was good for fifth place in the month of July. Image Comics needs Saga to return soon and develop another new hit series to help offset the loss of the longstanding zombie horror series. Dynamite Entertainment’s Vampirella #1 didn’t ship all of its reported 130k print run. In total Vampi moved 90k copies including overseas buyers. The title was also returnable so it’s likely a decent amount were sent back as well. Still that’s a huge debut for any comic title, especially from Dynamite. 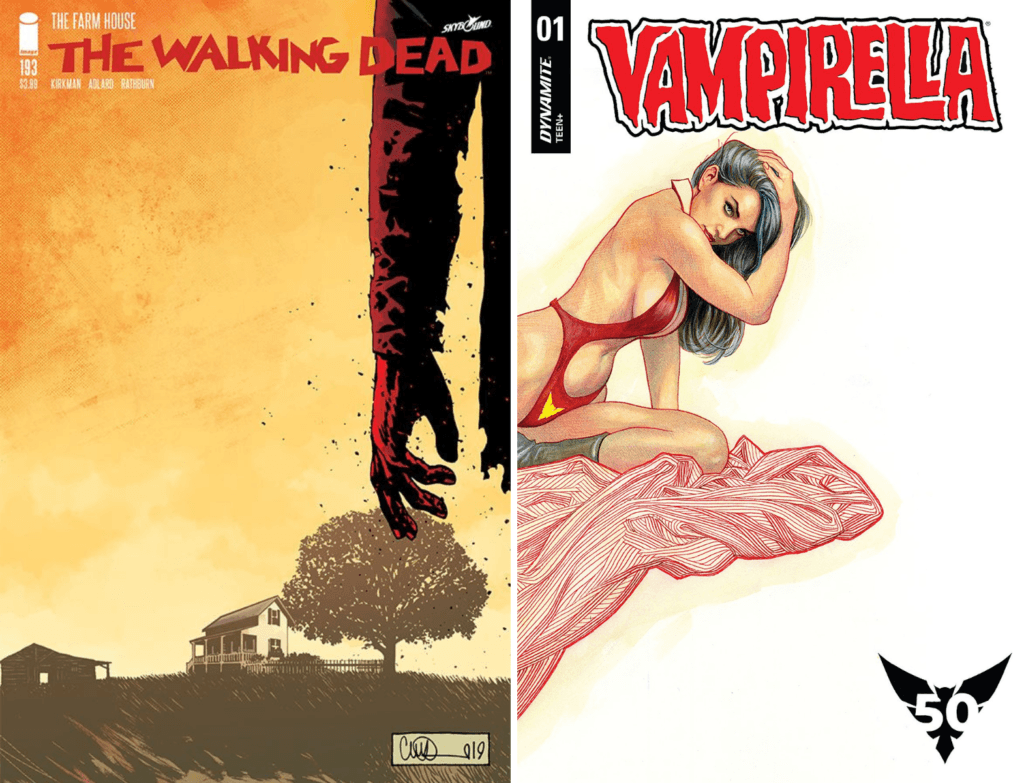 July’s featured books are DC Comics Aquaman and Naomi. Brian Michael Bendis is having a terrible influence at DC Comics. A handful of new talents arrived since Bendis jumped ship that have his fingerprints all over them. Among them is somewhat controversial Kelly Sue DeConnick. 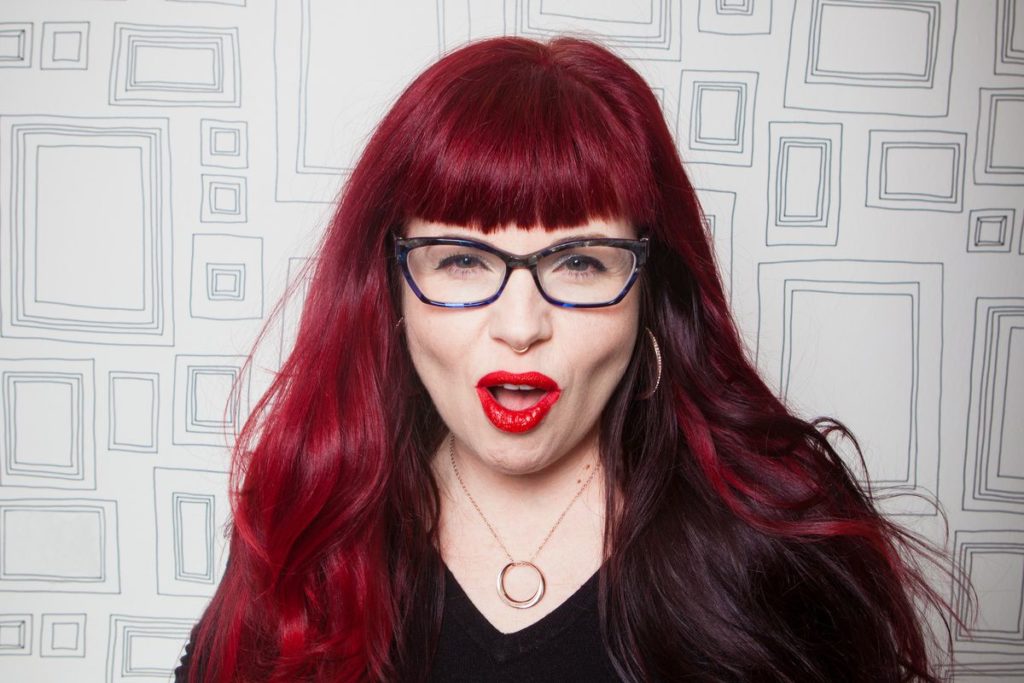 When she arrived at DC she was given the keys to Aquaman. She couldn’t have been put in a more enviable position. Warner Bros. just released a Billion dollar grossing live-action Aquaman adaptation. Previous writer Dan Abnett had it shipping a healthy 38k copies 42 issues into his run. And the book was right around the corner from a notable issue 50 milestone. As soon as Kelly Sue took the reins to Aquaman orders dropped to 30k. Aquaman sales are trending down ever since. In July, issue 50 arrived with card-stock variants that boosted Batman #75 orders by 33%. And the return of Aquaman’s principal villain Black Manta. Aquaman #50 moved a paltry 26k units, a 12% increase in sales from issue 49. 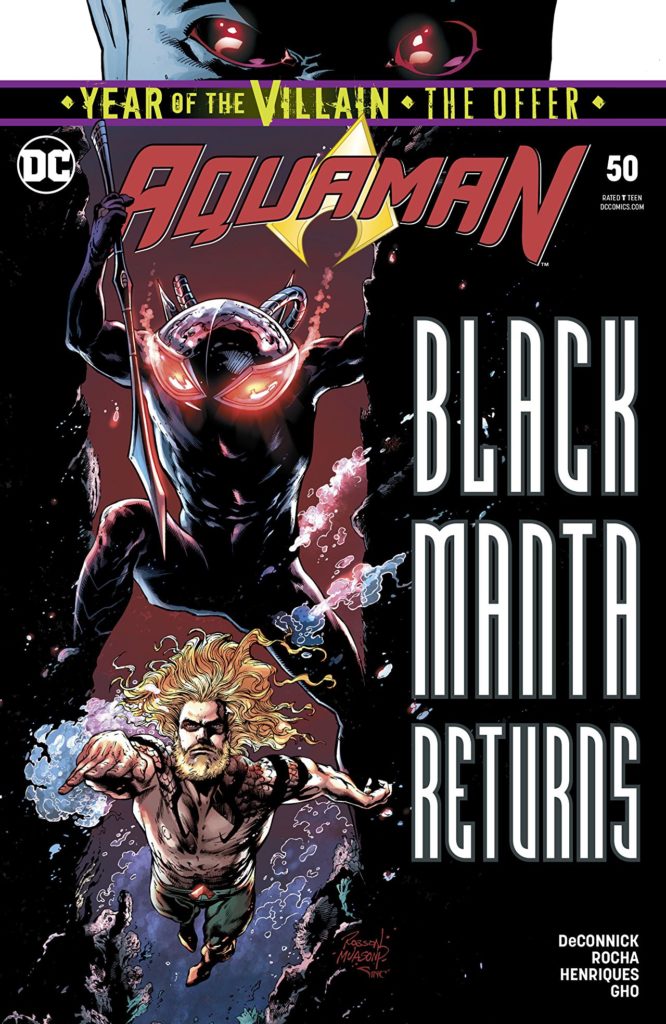 Needless to say DeConnick’s time on Aquaman has been less than fruitful. One ponders how far DC Comics brass take this before owning their mistake and moving what should be a very important character on to a less divisive, more accomplished superhero writer. 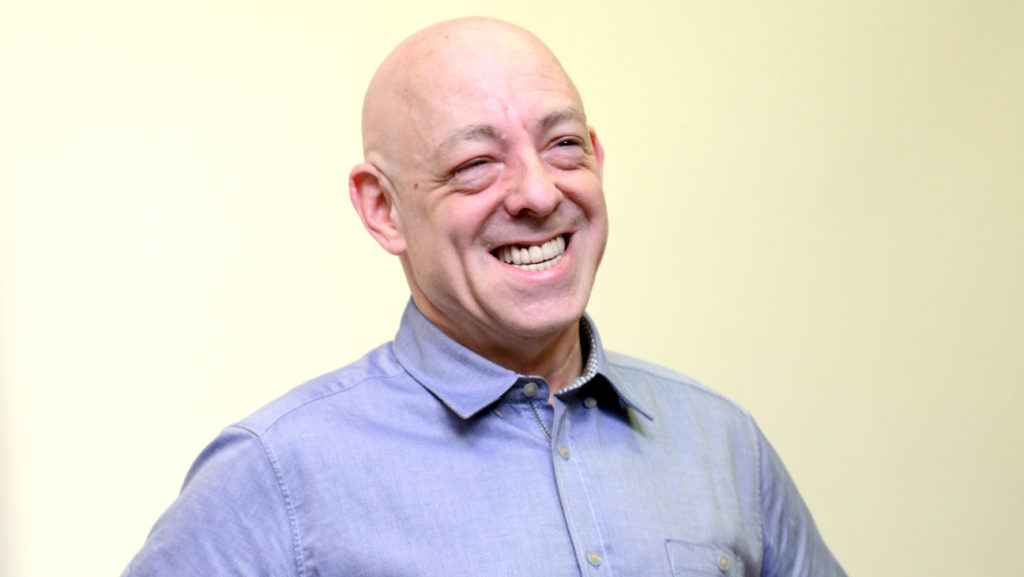 Brian Michael Bendis has had several terrible demonstrable effects on DC Comics. But he’s currently succeeding where many others fail. The “Big 2” have a very difficult time launching new character successfully in the current market. So it comes as a surprise just how well Brian Bendis’ Naomi is fairing under the Wonder Comics imprint. The 25k issues Naomi shipped on #1 appeared to spell doom for the new character from day one. Issue 2 saw a 40% drop in sales, very typical in today’s market. But lately the series has gained a ton of momentum, shipping 35k issues in July. 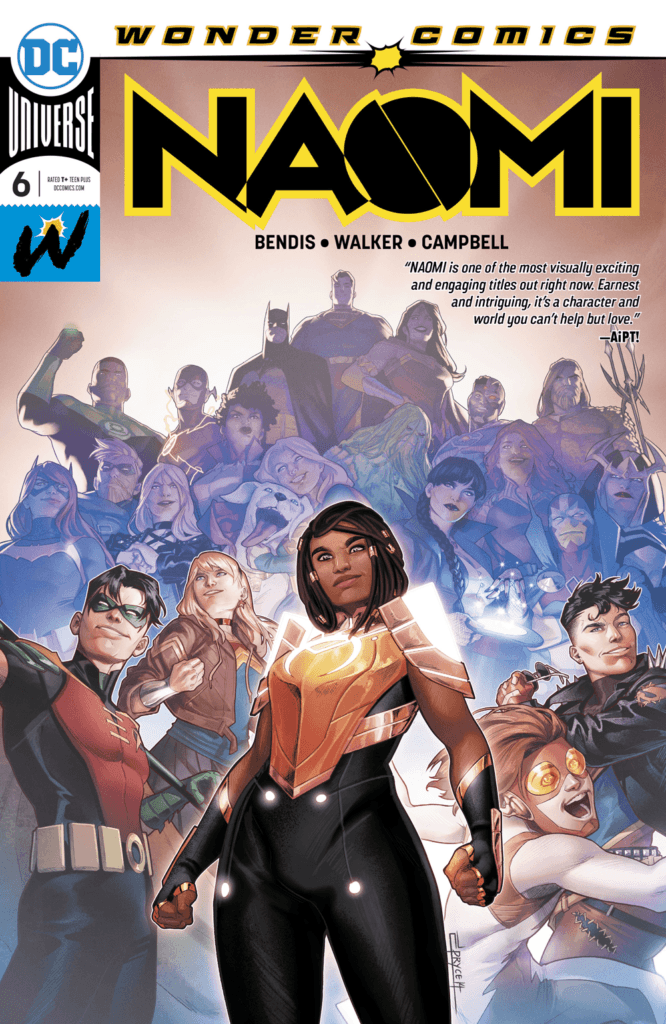 What’s the reason for this? While the book isn’t very good, the art from Jamal Campbell is excellent. But there’s more to it than that. The first print run of Naomi #1 is extremely small for a “Big 2” character debut. Recent prices for the book are soaring on the collectors market. That combined with a general increase in reader interest has caused retailers to start ordering more robustly. It’s up to Bendis, his creative team and DC editorial to build on this momentum and deliver quality stories and keep growing Naomi’s sales numbers.

Comic book and graphic novel sales are now ever so slightly in the green for 2019. Marvel is well positioned to dominate the market in the months ahead with Jonathan Hickman’s X-Men, Absolute Carnage, Amazing Spider-Man, Immortal Hulk and a host of 80th anniversary specials. DC Comics needs ‘Year of the Villain’ to hit with readers to try and keep pace. Initial indications are ‘Year of the Villain’ is being rejected by a portion of DC Comics audience. Expect Marvel Comics to continue dominating the market in the months ahead.

For a more in-depth look at July’s comic book sales please view my video below.