The classic New Mutants reunite and embark on a mission in deep space with the Starjammers in Jonathan Hickman, Ed Brisson, and Rod Reis’ New Mutants #1 from Marvel Comics, the best-selling comic book in November 2019 according to information provided by Diamond Comic Distributors, the world’s largest distributor of comics, graphic novels, and pop culture merchandise.

Marvel Comics was November’s top publisher, taking a 37.41% dollar market share and a 42.68% unit share. DC was second, with a 30.72% dollar share and a 32.41% unit share. Image Comics placed third with 7.90% in dollars and 7.87% in units, followed by BOOM! Studios, IDW Publishing, Dark Horse Comics, and Dynamite Entertainment.

Marvel Comics had eight of November’s ten best-selling comics, including X-Men #2 at #2, Absolute Carnage #5 at #3, X-Force #1 at #4, Fallen Angels #1 at #5, Deadpool #1 at #6, Amazing Spider-Man #33 at #7, and Amazing Spider-Man #34 at #10. Image Comics’ Undiscovered Country #1, the new series from Scott Snyder, Charles Soule, Giuseppe Camuncoli, and Daniele Orlandini, ranked #8. DC was also in the top ten; the “Year of the Villain” acetate cover edition of Tom King and Mikel Janin’s Batman #82 ranked #9.

The heroes of the DC universe wage a desperate war against a world corrupted by the Anti-Life Equation in Tom Taylor and Trevor Hairsine’s DCeased, November’s best-selling graphic novel, collecting the best-selling mini-series from DC and one of the publisher’s two books in the top ten, along with Frank Miller and John Romita, Jr.’s Superman: Year One at #5. BOOM! Studios’ Firefly: The Sting, an original graphic novel based on the television series, ranked #2. Marvel Comics had four titles in the top ten; The Immortal Hulk Volume 5: Breaker of Worlds, was the top book at #3. Image Comics’ November Volume 1 ranked #4. Dark Horse Comics had two titles in the top, led by The Legend of Korra Part 2: Ruins of Empire at #6.

Paizo Publishing’s Starfinder RPG: Character Operations Manual, a sourcebook for the science-fiction role-playing game, was November’s best-selling game product and one of the seven Paizo products among the top ten. 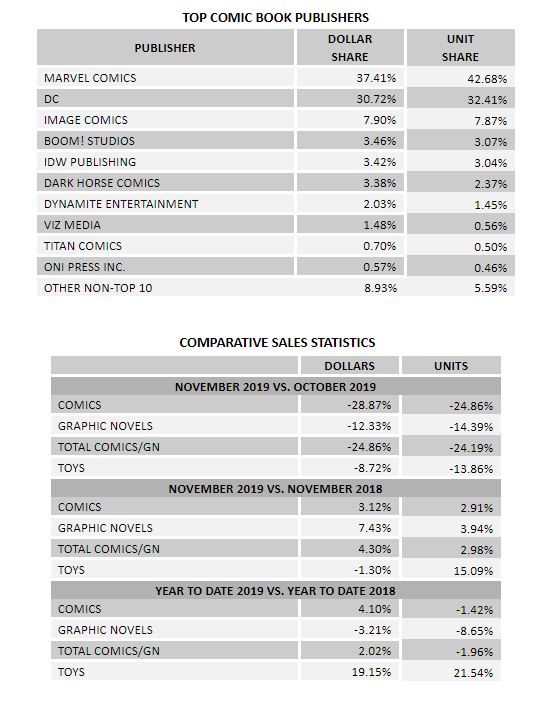 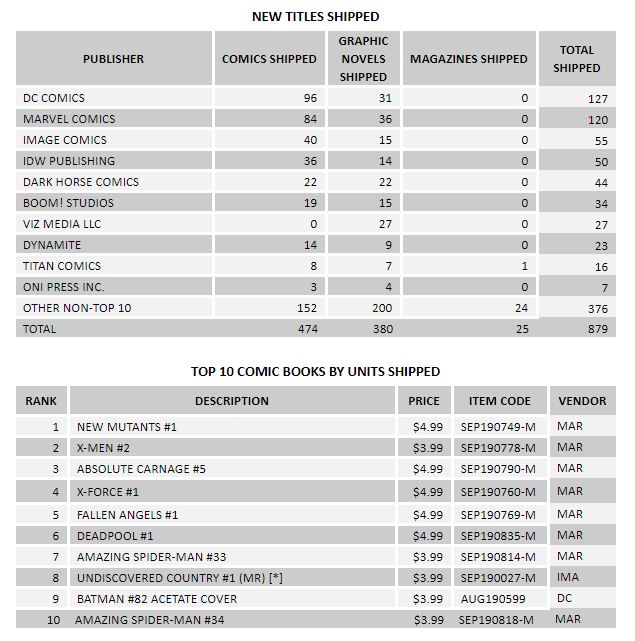 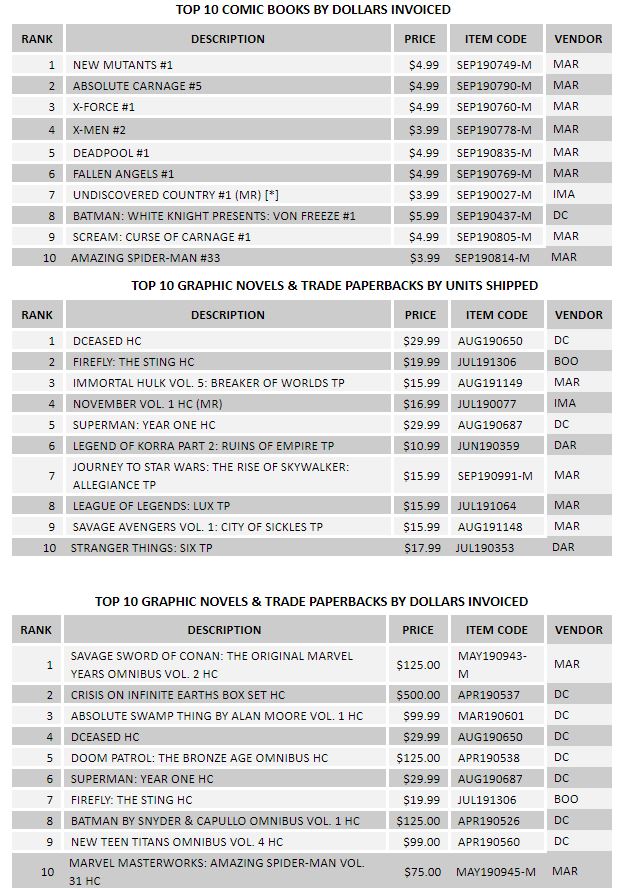 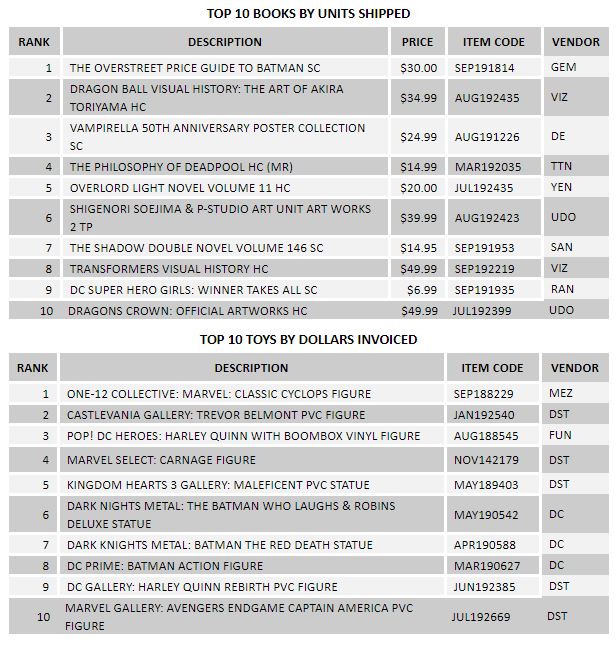 How does Diamond calculate the charts? It all starts at the comic book shop.

Data for Diamond’s sales charts — which includes the monthly market shares and all top product charts — are compiled by Diamond Comic Distributors from sales made to thousands of comic book specialty shops located in North America and around the world.  Additional sales made to online merchants and other specialty retailers may be included as well.

Unit and dollar market shares are calculated based upon orders for comic books, graphic novels, and magazines invoiced and shipped to Diamond customers during any given month, which comprises pre-orders, advance reorders, and reorders, minus any copies that are received back from a title marked as returnable. Please note that comics marked with an asterisk (*) have had their reported quantities reduced due to retailer returnability, and thus may rank lower on the charts than their actual sales would reflect.

The New Titles Count Chart includes all titles that were invoiced by Diamond to retailers for the first time during the month and is not the official solicited title count for the month. Variant edition comic books and graphic novels at the same price point count as a single SKU. Variant edition comic books, lenticular covers, digital combo packs, and graphic novels at different price points count as separate SKUs for each edition.