The indie comic scene is as crowded as ever. While the big two feature shared universes with mostly superhero comics. The indie market is rich with a wide variety of genres and art styles. The sheer volume of books on the independent market makes it virtually impossible to consider every single worthy series. And it was very difficult to narrow my list to just five.  Alterna Comics Blood Realm, Ahoy Comics The Wrong Earth, Image Comics DIE! DIE! DIE!, and Vault Comics These Savage Shores, all barely missed the cut.

So let’s get into the good stuff, starting with number five. The best crime noir series in comics.

Ed Brubaker and Sean Phillips are one of the most prolific creative teams in the industry. Together they’ve created Fade Out, Fatale, Kill or Be Killed and multiple volumes of Criminal at Image Comics. Sean Phillips gritty art style fits the world of Criminal perfectly. He excels at panel layouts. The way he visually switches between past and present is very easy to follow.

Ed Brubaker is one of the most accomplished writers in the industry. He can switch seamlessly between genres, but found the perfect home in crime noir. The stories of the Lawless family are darkly funny and feature all kind of sleazy locations and characters. It’s a violent series but never goes too far over the line. If you enjoy stories about the seedy underbelly of society and aren’t reading Criminal you’re missing out on a fantastic series. 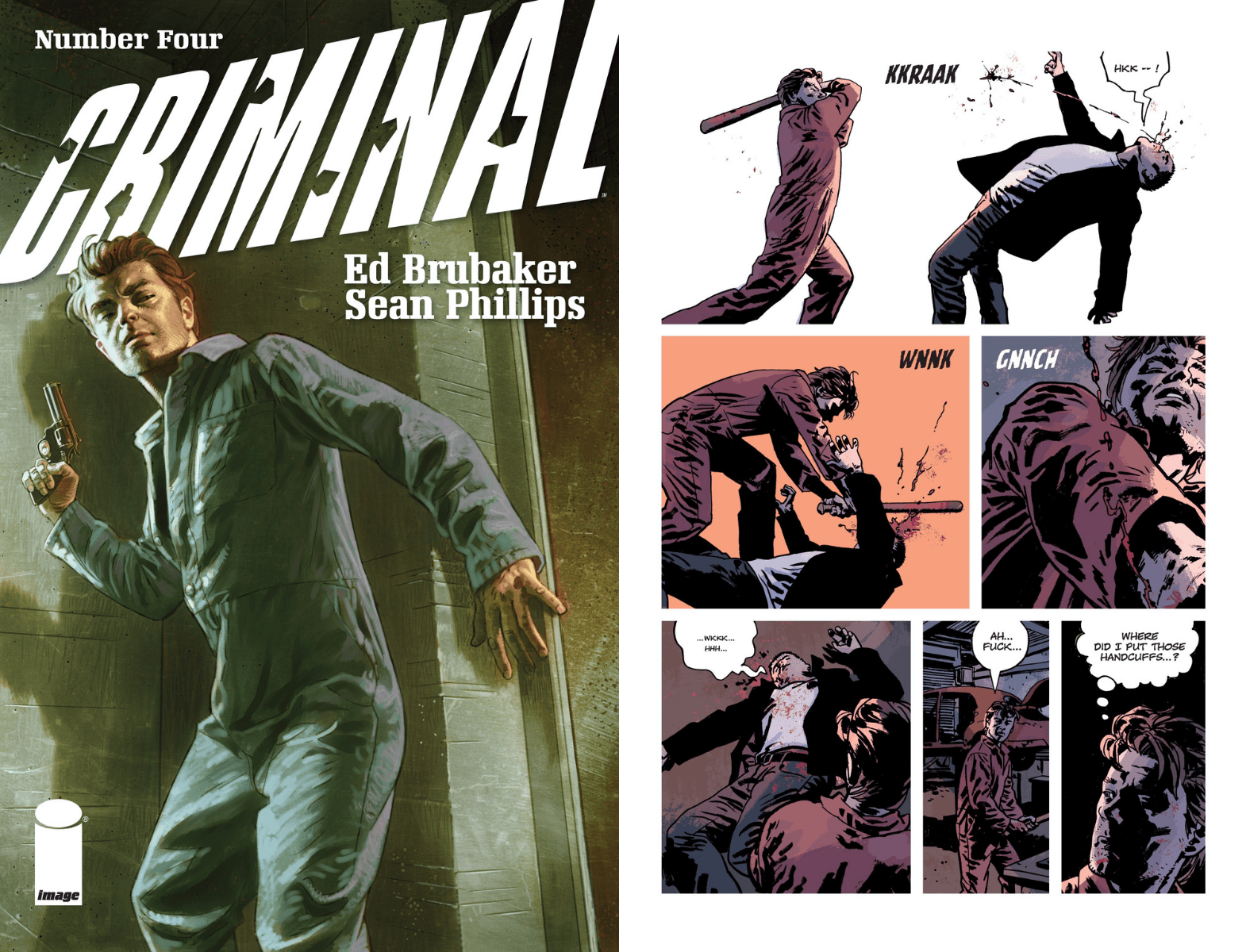 Terry Mayo and Lucas Romero are the creative team behind one of the best post-apocalyptic series in comics today. Romero has a distinct anime influence in his character faces and actions. He fuses them with Western comic art style impeccably. His characters all emote through the page and add to the tension of the story.

Terry Mayo does a wonderful job molding post-apocalyptic San Diego. He focuses a majority of his efforts on what he does best. Characterization. Mayo fleshes out brothers Lucas, Matt, Mark and Johnny as well as the supporting cast to perfection. This is the best comic on the market for character focused readers. Alterna releases series in story arcs, The Wicked Righteous is currently releasing its Exodus miniseries. 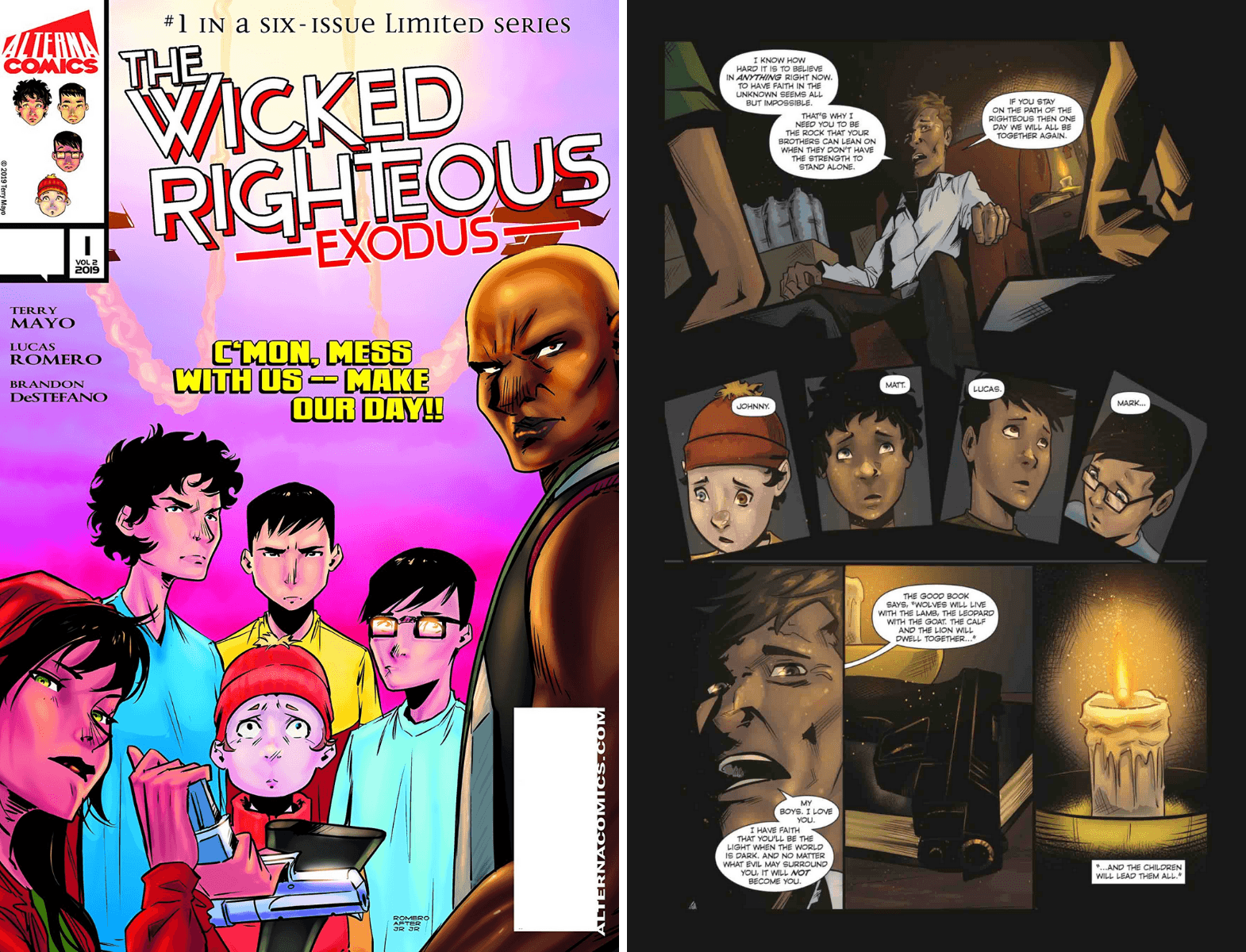 The number three indie comic on my list has been publishing for 27 years and is about to break a major record in the industry.

When Todd McFarlane and the “Image 7” created their new company in 1992 Spawn was launched as a flagship series. Spawn has an amazing list of past artists including McFarlane, Greg Capullo and Tony Daniels. The bar is set through the roof. Jason Shawn Alexander took lumps early on but he’s at home on the series now. His gothic visuals fit the character and setting flawlessly. His art belongs alongside the very best Spawn artists of the past 27 years.

The Toddfather created Spawn in high school and is on his 27th year writing the character. Spawn has developed dramatically over the years. He’s currently on a mission to save humanity from the agents of hell who created him. Spawn is developing new powers as Al Simmons and the symbiote continue growing together. Spawn is one of the most exciting series in the industry heading to its record breaking issue 300. 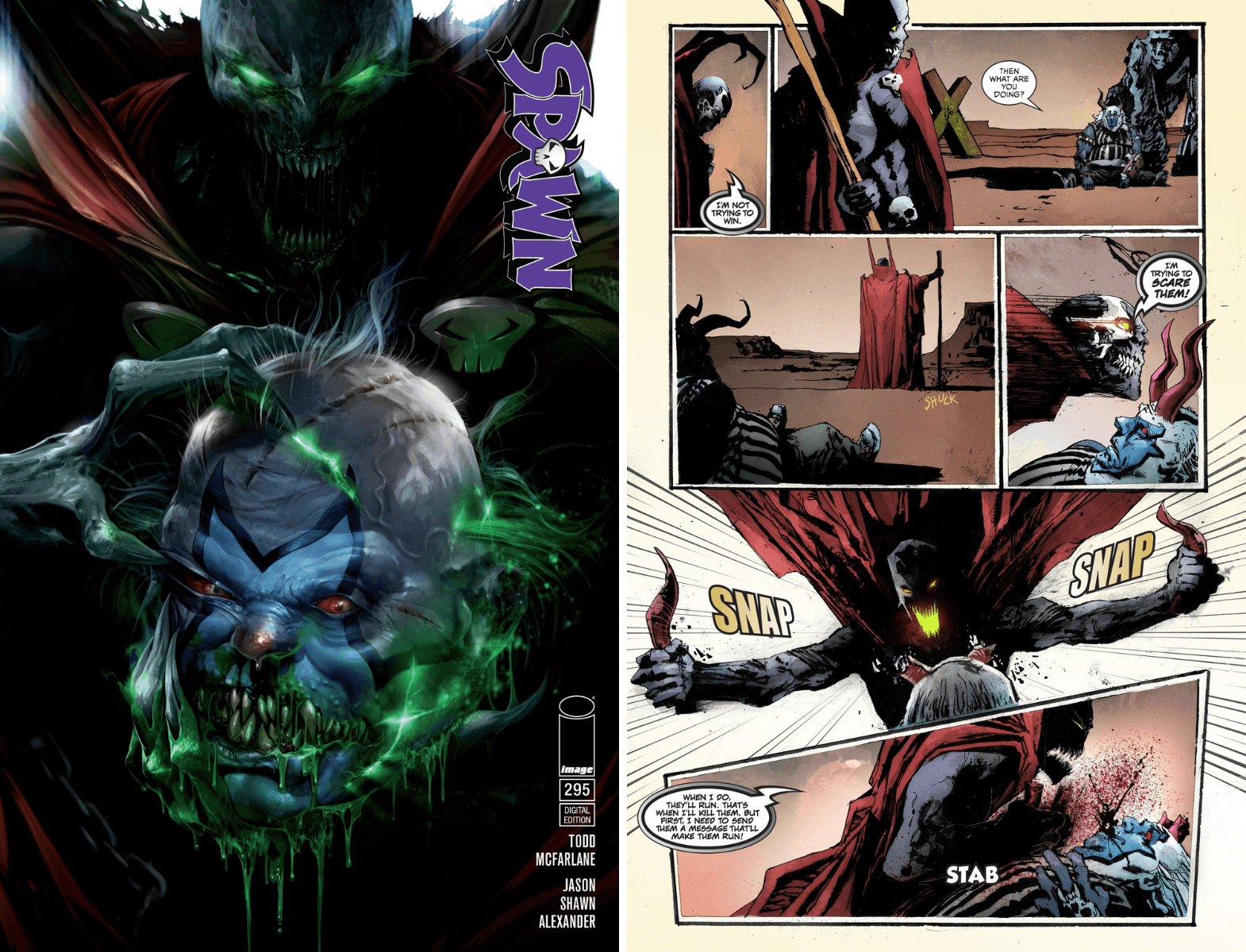 IDW is much more miss than hit these days but one property firing on all cylinders is Teenage Mutant Ninja Turtles. My number two indie series returns classic villain Shredder to the fold.

Mateus Santolouco is the writer/artist behind this fantastic miniseries. The Brazilian comics pro previously wrote and illustrated The Secret History of the Foot Clan miniseries. He’s taken his graphics to the next level. His line art is extremely fluid and clean His characters are very dynamic and action impactful. Santolouco is also masterful with character facial expressions and body language. Shredder in Hell is one of the most stunningly illustrated books in comics today.

Shredder in Hell builds upon the first 50 issues of IDW’s Teenage Mutant Ninja Turtles that culminated in the death of the iconic villain. It delves even deeper into former ninja clan mates turned enemies Oroku Saki and Hamato Yoshi. Santolouco does an amazing job humanizing Saki in preparation of his return to the TMNT universe as Shredder, likely in issue 100. TMNT might be the best managed property in all of comics outside DC and Marvel. 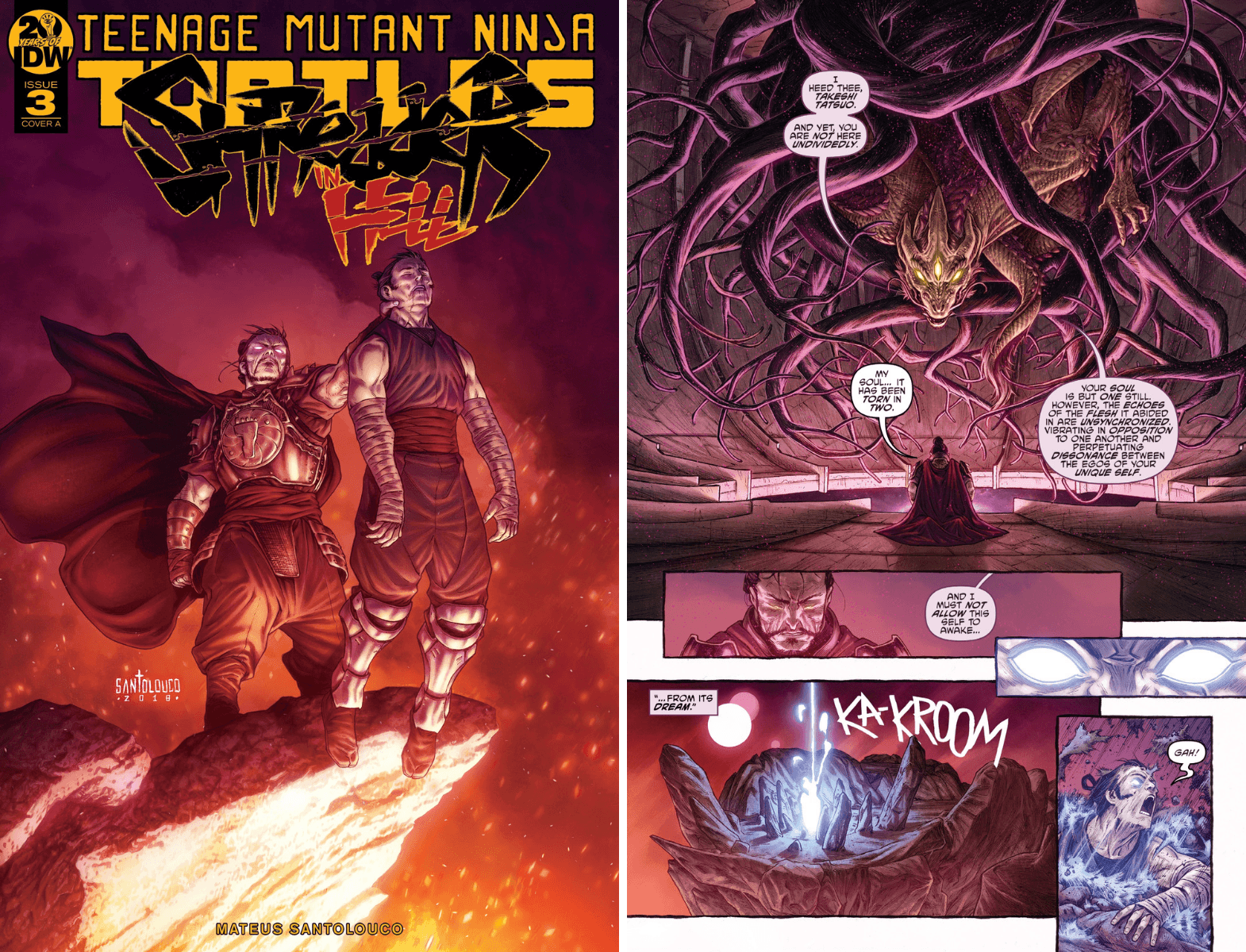 My number one Indie comics features a veteran writer and an artist illustrating her first ongoing series. Keiron Gillen and Stephanie Hans create the best fantasy series in comics today.

Image Comics Die might be the most beautifully illustrated series in the industry. Stephanie Hans’s artwork is a revelation. Her visuals are bold and fantastical. You will never find anything this daring or imaginative in a DC or Marvel comic. Quite frankly they don’t have the balls to allow artists this much expressive freedom. Her use of light to convey emotion is superb. Hans creates a host of unique character designs and creatures that bring Gillen’s story to life. Stephanie Hans has not only arrived, she is a powerhouse in the industry.

Kieron Gillen’s writing is similarly brilliant. Die is an epic fantasy comic that sees a group of childhood friends return to the world of Die. It’s a very sad, and at times depressing, story. The group of would-be heroes try to right the wrongs of the past and maybe even save a friend left behind. His characters are fully realized. The setting is dangerous and fleshed out in striking detail. Keiron Gillen has penned many great stories over the years but Die is his finest achievement to date. 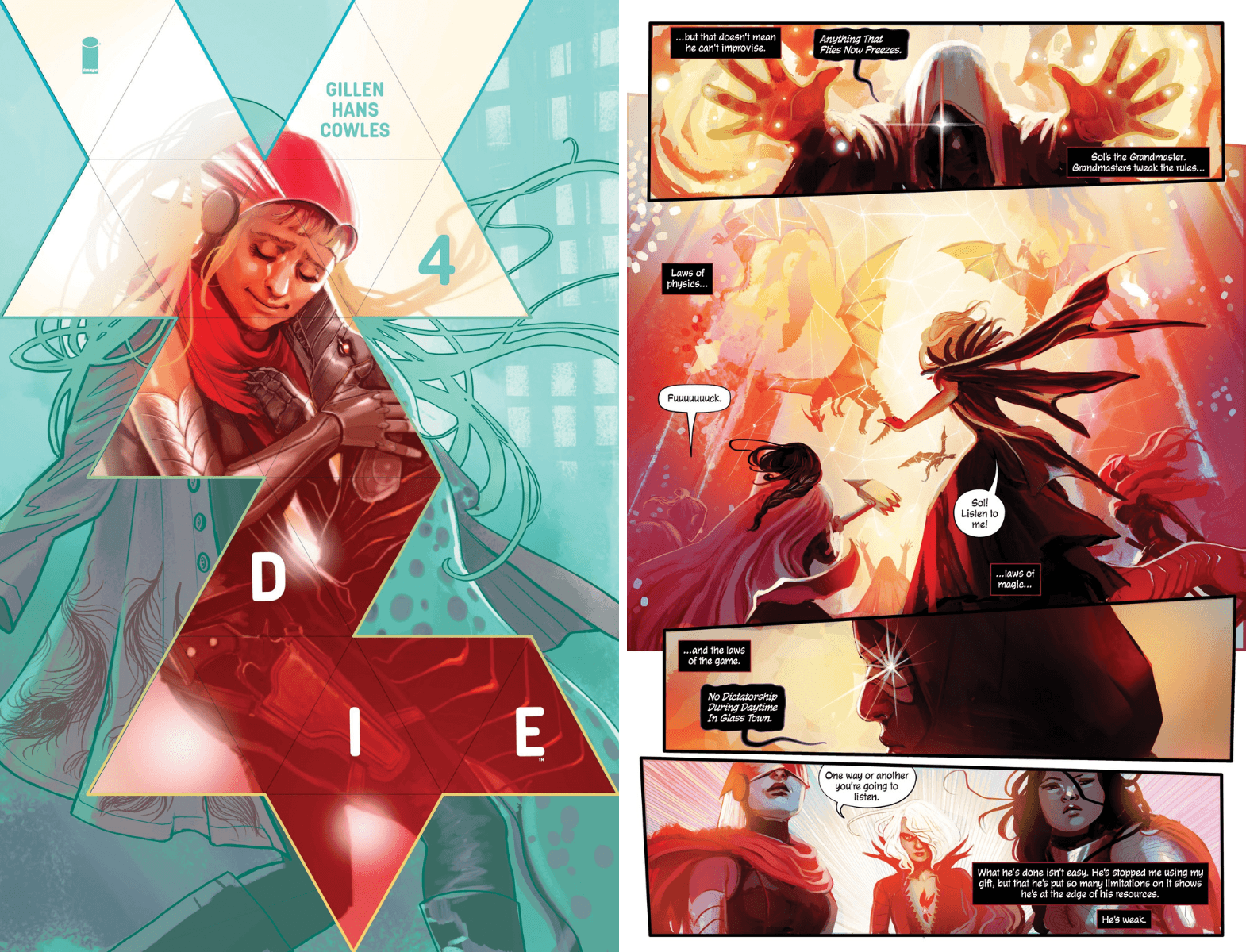 There you have it. My Indie comics Top 5 list. The Indie comic scene is a terrific alternative to DC and Marvel as they compete to see who can be the most mediocre publishing house. There are a wide variety of genres and art styles available for readers of all tastes. My Top 5 includes a mix of marque franchises and creators alongside lessor known properties and fresh talents. Criminal, The Wicked Righteous, Spawn, TMNT: Shredder in Hell and Die are all terrific and can compete pound for pound on quality with any series from DC or Marvel. Please let me know your thoughts and your personal Marvel Comics Top 5 in the comment section.