Welcome back to another installment of Indie Comics Showcase! Before we get into this week’s installment ……. support some indie comics, and I aim to direct you to some excellent choices every week! 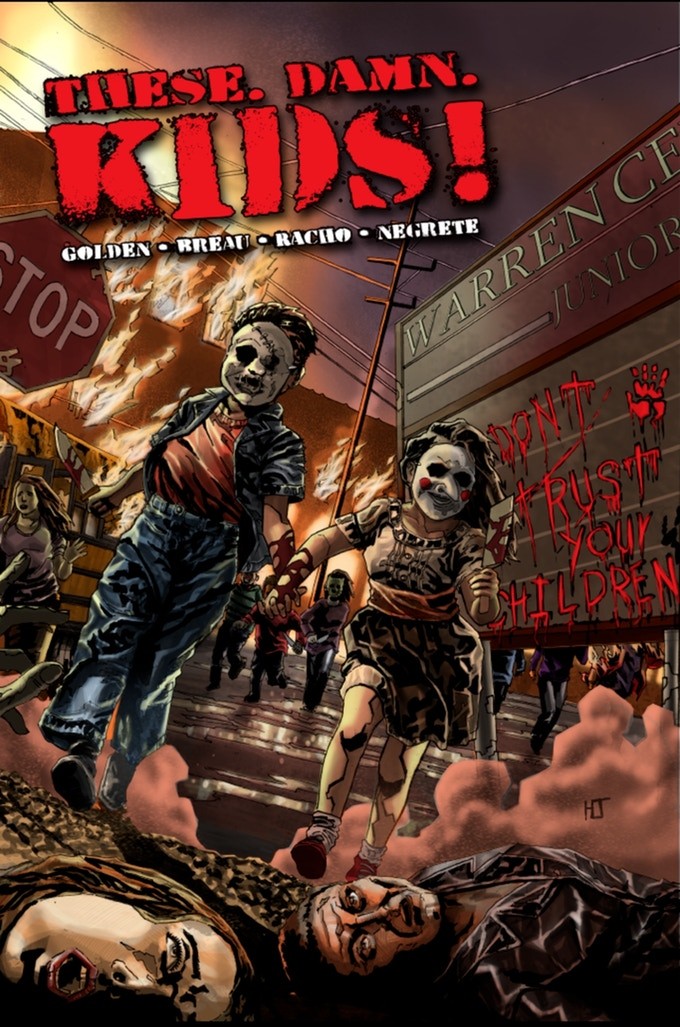 In a small town in Vicksburg, Mississippi the children have been acting strange. There have been reports of parents being attacked by the very children they raised. Some have even gone to school to try and kill the teachers and faculty. The town sheriff has brought in a young rookie cop, Gary Marshall, to help with what’s going on and hopefully get to the bottom of why it’s happening.

CHECK OUT THE KICKSTARTER HERE

John Lemus: Bradley , Welcome back to and thank you once again for being a part of Indie Comics Showcase. I am happy to be discussing your latest indie Horror Comic THESE. DAMN. KIDS! with you, today. Catch us up to how and what has changed since we had you on the last we had you on, for Leave On The Light?

BG: Well, as you may know, LEAVE ON THE LIGHT #1 has just come out through Antarctic Press, with a new issue due do out this month. We also have HORROR COMICS now out through Antarctic Press as well. I’ve built a singular horror universe with these titles. HORROR COMICS is a prequel to LEAVE ON THE LIGHT as it tells the story of a young Sarah Mckinney.

JL: So proud of you, man! Without giving away to much, what can you tell us about THESE. DAMN. KIDS!?

BG: THESE. DAMN. KIDS! Is indeed another prequel comic to LEAVE ON THE LIGHT as this series tell the story of Gary Marshall before he was the hero cop from Mississippi on the Thomas Lassey case. My plans is to treat this like the Conjuring movies and universe where I plan to tell stories that are intertwined for a bigger story. 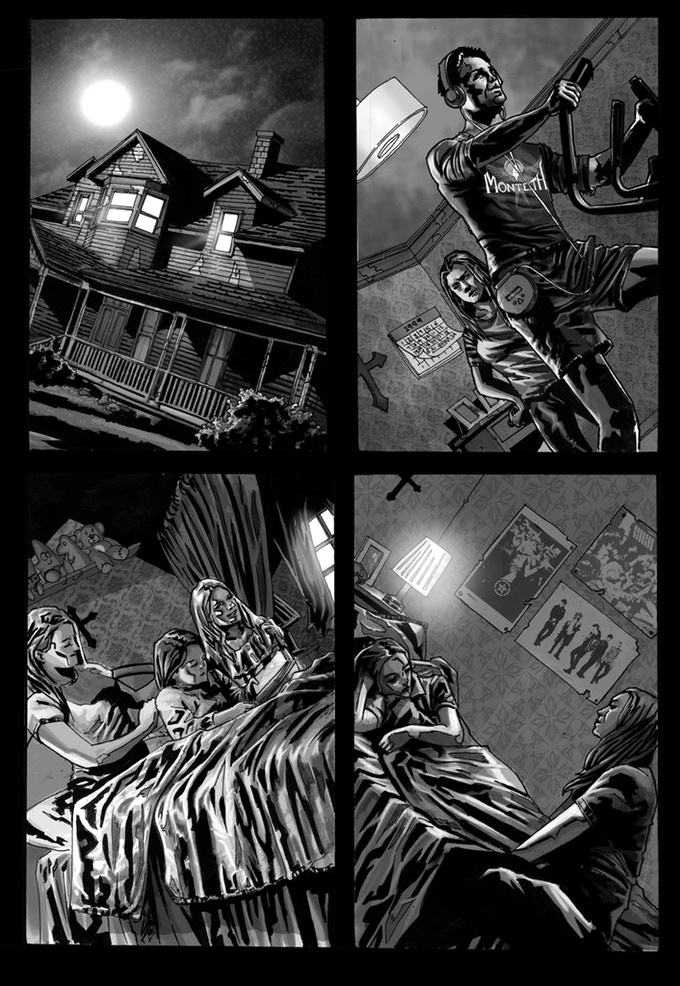 JL: We’ve had you on for Leave on The Light, Mississippi Zombie, and I believe the first time you were on here for Timmy Lala’s Ice Cream. There seems to be a pattern developing. Tell me, what about horror comics captivates you, and what do you think captivates your readership?

BG: Again this is no coincidence in my storytelling. All these comics are in the same universe, and in the end will tell a bigger story in the future. Horror stories to me, tell the best stories and have the best characterization. Plus I’ve got a great creative team with co-writer Peter Breau, artist Helmut Racho,  and letters by Hector Negrete bringing it to life! 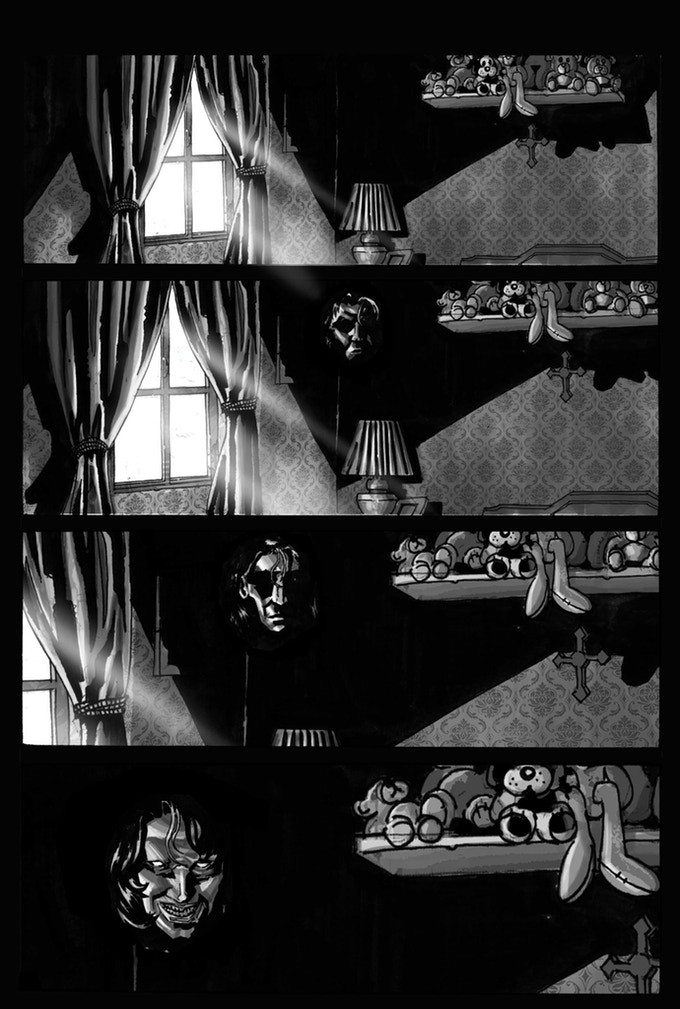 JL: Can you tell us a little bit about how tackle this campaign as compared to your previous ones?

BG: I can say one thing, the rewards will be handled a looooot better this time around than LEAVE ON THE LIGHT campaign was. I think I was overwhelmed by the reception of that campaign. I definitely learned from that. 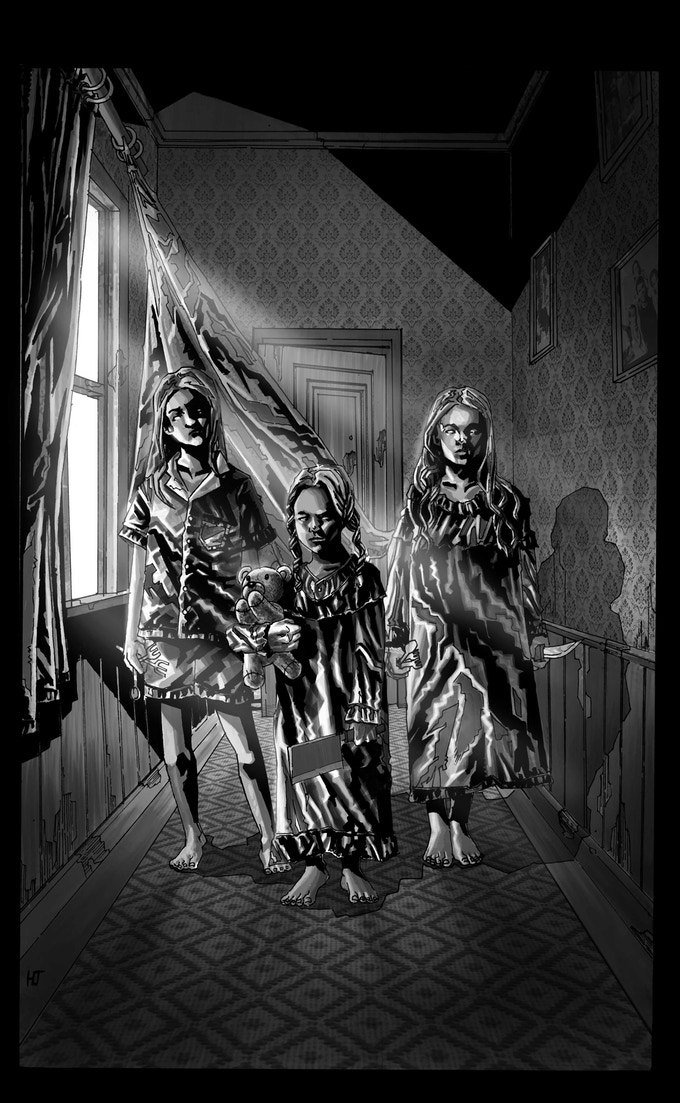 JL: Have you been reading any mainstream comics recently?

BG: I’ve been reading the War of the Realms stuff by Marvel lately and City of Bane by DC comics. 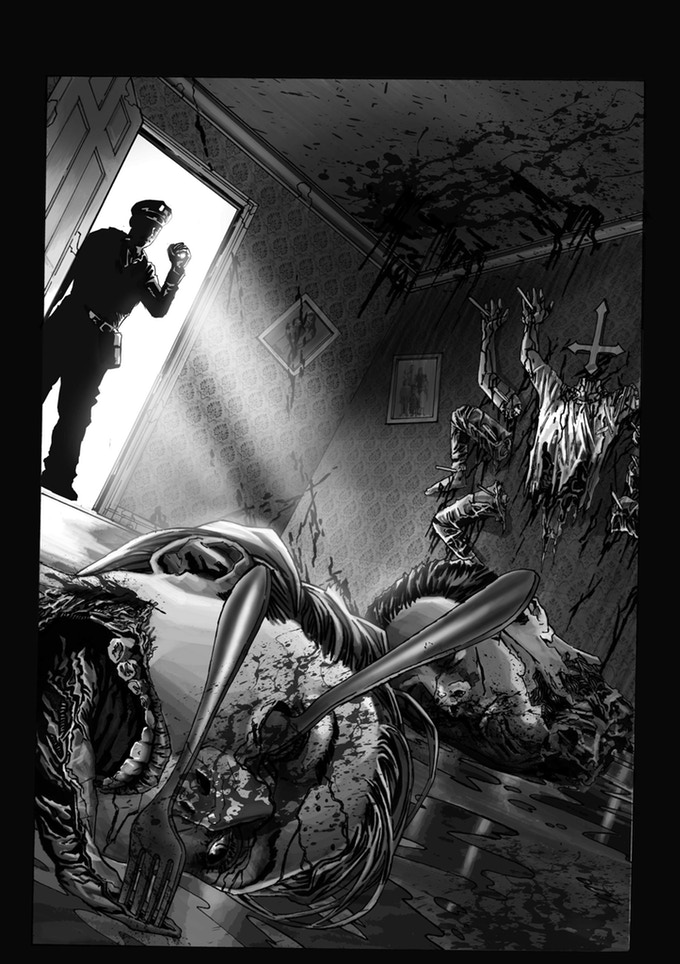 JL: Have you been reading any Indie Comics recently?

BG: Yes I been reading Bad Reception and Manor Black. I’m about to get into some Scout Comics stuff as well.

JL: What does THESE. DAMN. KIDS! mean to you, what about it makes it a story you want to tell? 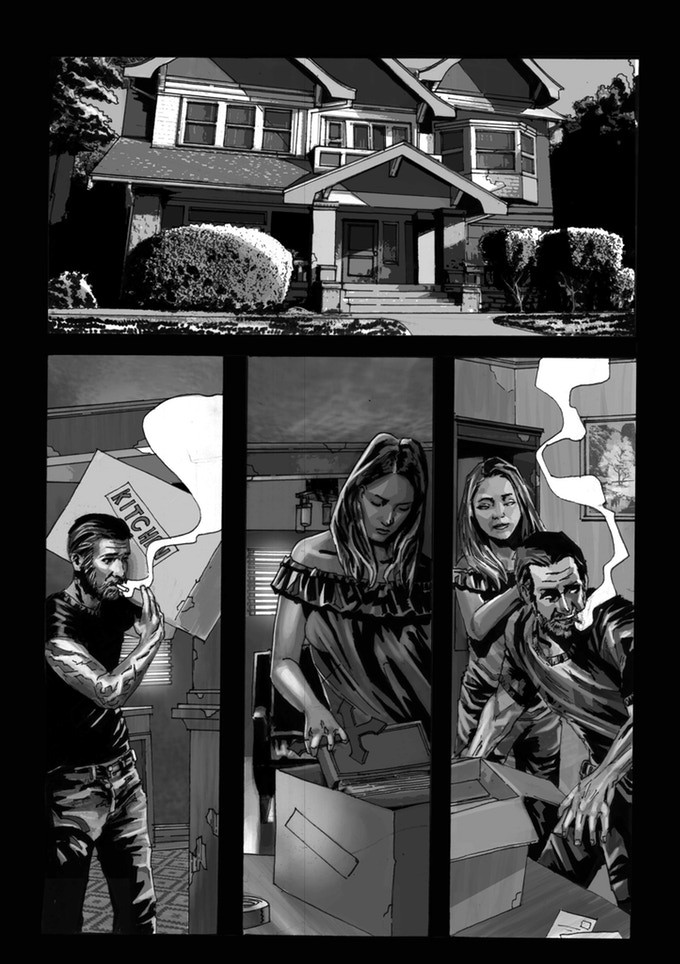 JL: What are some of the things that get your creative juices flowing when working THESE. DAMN. KIDS!? Do you read anything, watch any shows, listen to music as you work?

BG: Honestly, I watch Children of the Corn and listen to Eminem and Marilyn Manson at the same time. But mainly looking at the news give me ideas and motivations. 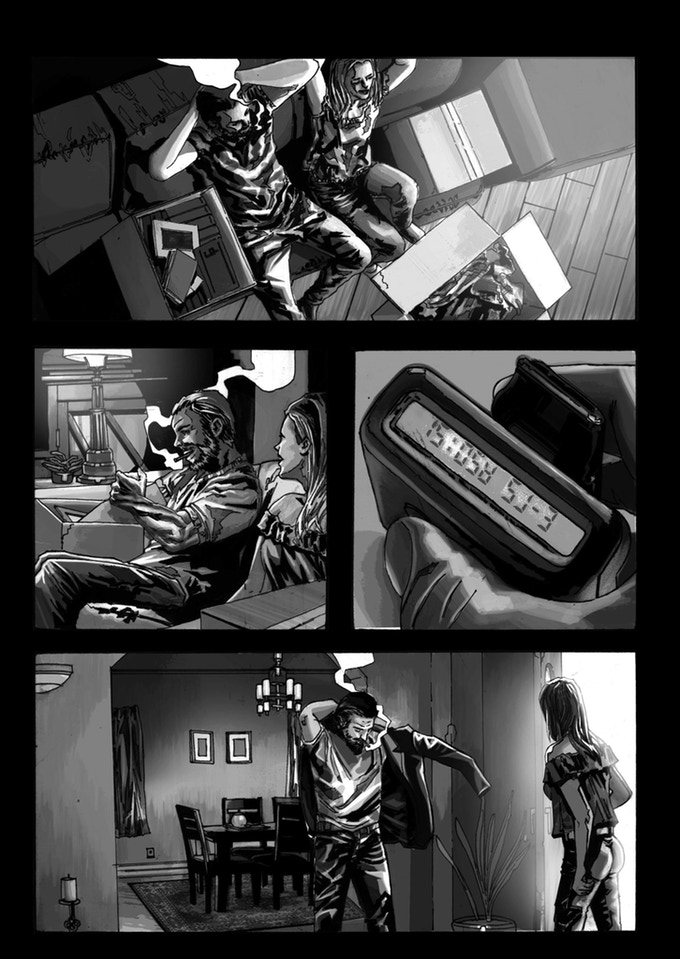 JL: Can you tell us a bit about your creative process?

BG: It’s no different than any other writer. I jot down a simple, single idea. From that idea I plot out different paths in how things could go and from there begin fleshing out the script for the overall story and issues. 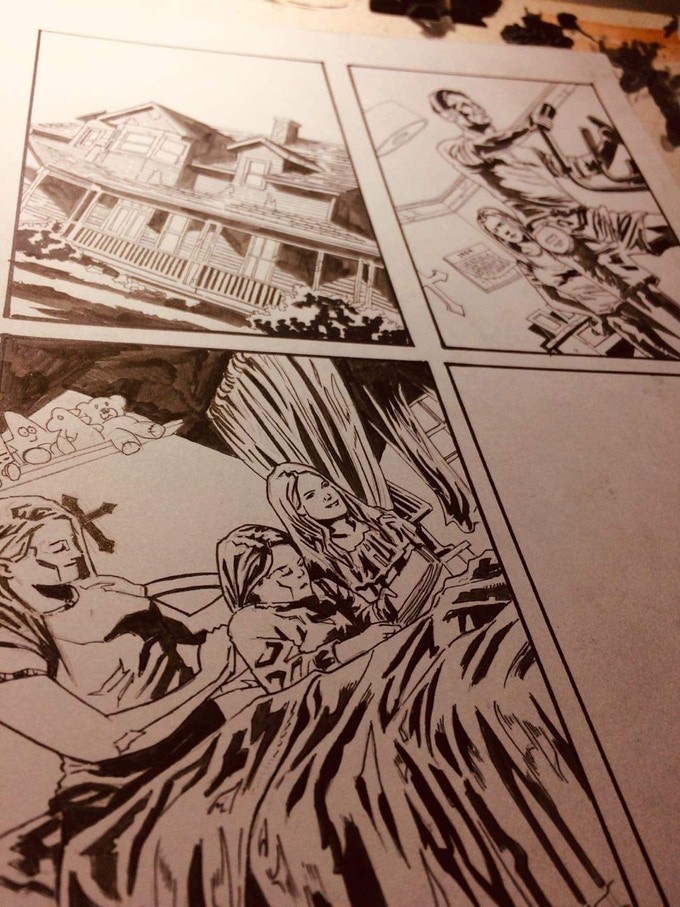 JL: What are your feelings about the current state of Indie Comics, and have they changed since you started?

BG: I am happy and excited at how so many indie comics are becoming movies and TV shows. Hollywood has finally taken notice of comics as a medium that can tell exciting and original, quality stories. 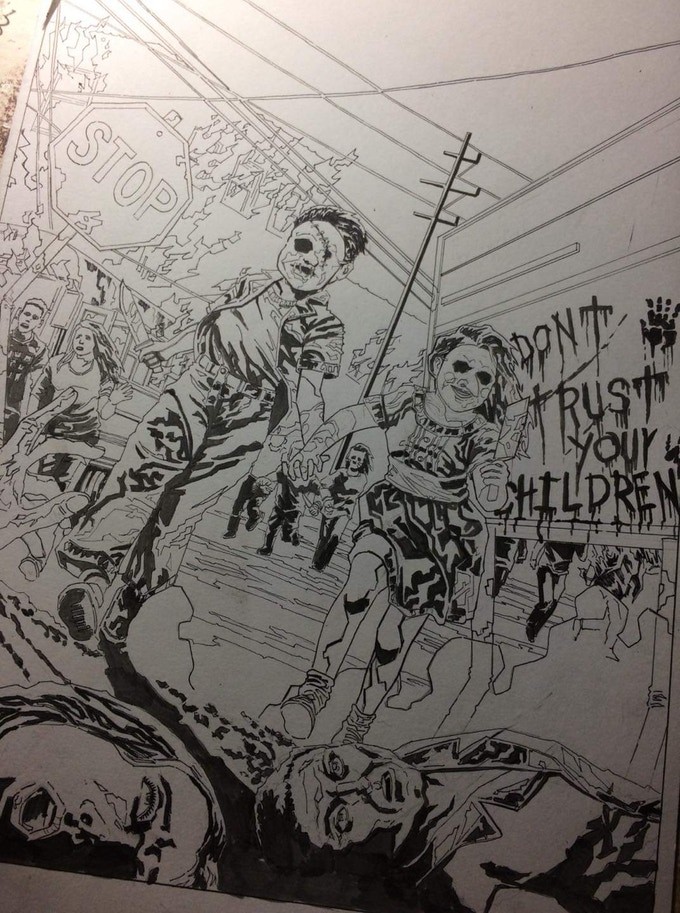 JL: What are your hopes for THESE. DAMN. KIDS! for the future?

BG: Yes, if you liked LEAVE ON THE LIGHT and HORROR COMICS please consider giving this a try. It’s a solid story and I promise you won’t be disappointed. 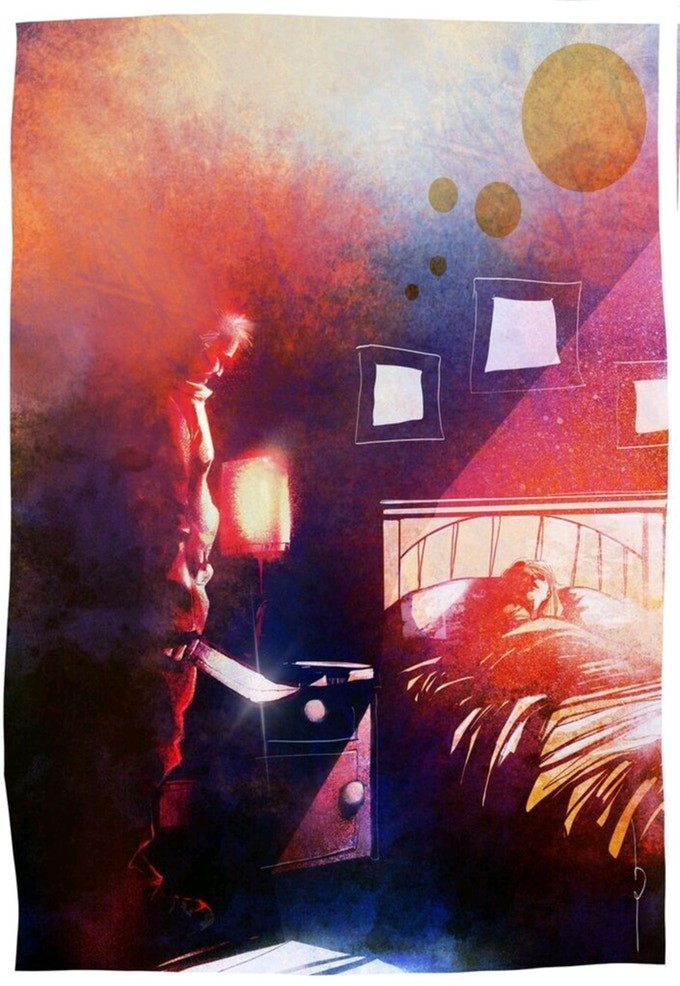 JL: Once again Bradley, I’d like to say thank you for being a part of indie comics showcase. We wish you the best of luck on this campaign and all future projects.

BG: Thank you for having me. 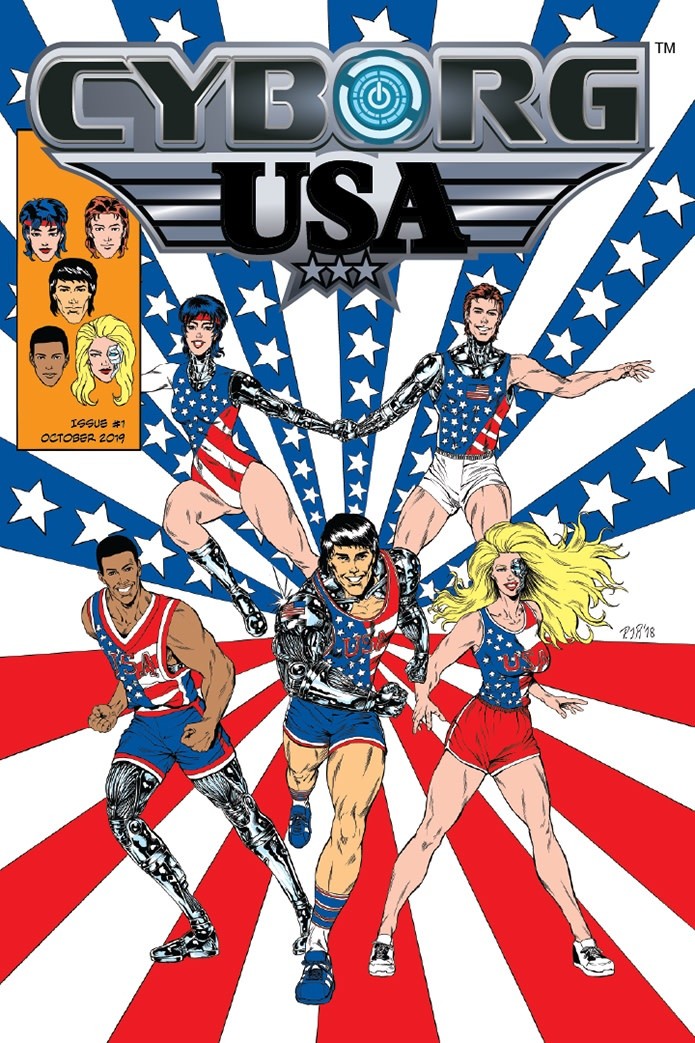 Check out the Indiegogo Campaign here!

Chris Braly: What is the ‘elevator pitch’ for Cyborg USA? Briefly tell our readers what it’s about and give us some background on it.

Rob Cacy: CYBORG USA is the story of America’s elite athletes, maimed by a terrorist harem called THE RED SKIRTS, they are reanimated as a team of super-killer cyborgs working for THE ATTORNEY GENERAL of the United States. 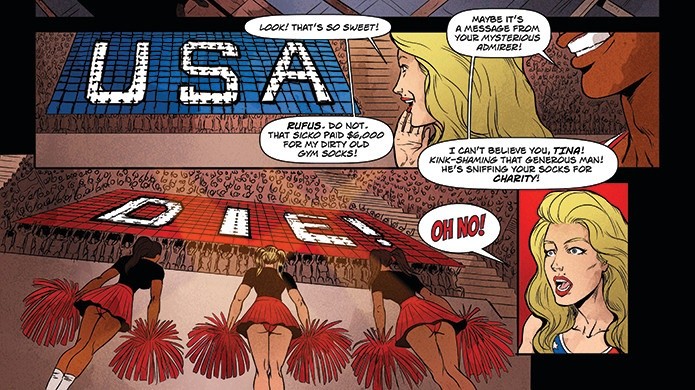 Our heroes: TINA, RUFUS, BIZBY, HUTCH, and CPT. USA, are competing at the World Team Championships, when THE RED SKIRTS, the anti-globalist, anti-technology death-cult, attack the competition. SUPERTEAM USA thwarts the attack, becoming international heroes. This enrages THE RED SKIRTS and their leader, YURI. They engineer a horrific train collision that maims, and apparently kills SUPERTEAM USA, but, they are reanimated into super-cyborgs by the mysterious HANZ ULRICH. THE ATTORNEY GENERAL introduces them to the PRESIDENT OF THE UNITED STATES, who christens them: CYBORG USA. 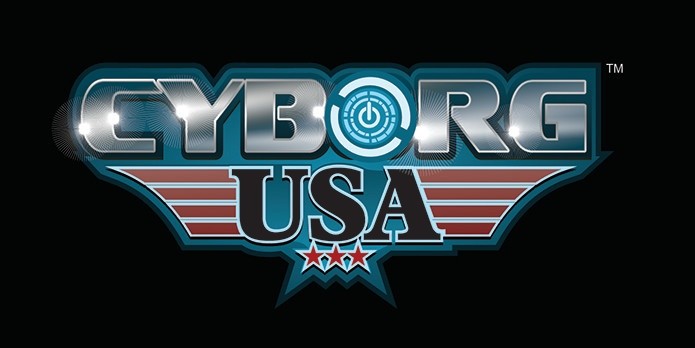 CB: Wow! Can you let us in on who or what inspired you to tell this story and how long you’ve been working on this?

RC: This is an idea I’ve had for about 20 years. I started writing stories about these characters when I first moved to New York City. I had a close friend in high school who was an Olympian, and I was at the Olympics in Atlanta in 1996, where I missed the bombing of the Olympic Village by about 20 minutes. I was trying to come up with an idea that would have appealed to me when I was a kid in the 1980’s, watching animated shows like G.I Joe and M.A.S.K., also Mr. T. and the A-Team, Wonder Woman, and Super Friends. This idea also owes a lot to Robocop, which I saw on opening night. 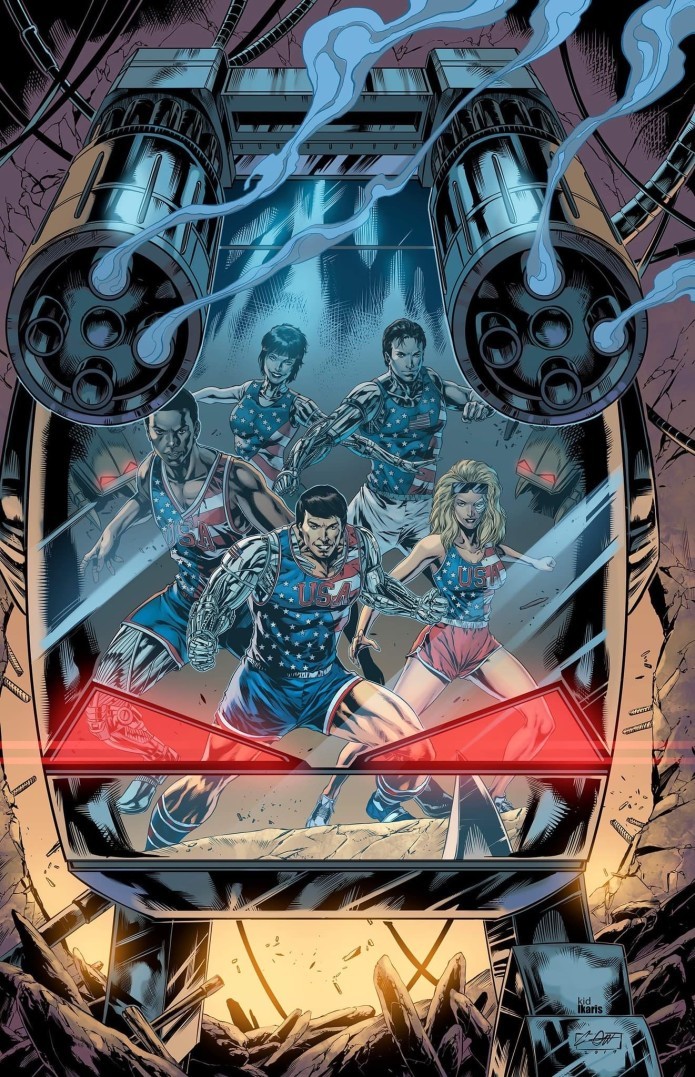 I have been working with Zach Tabacco as a writing partner for about 15 years. We revisited this idea a couple of years ago, when I started getting heavily back into comics by watching some of the comics personalities on YouTube. We hired Pablo Romero last year. He was the perfect choice! We selected him based on that 1980’s animated vibe that he gives some of his work. He brought our characters to life right out of my imagination.

CB: Tell us why you felt this should be told in comic book form. Are you a fan of the medium? What are some similar comics readers may be familiar with that will find Cyborg USA appealing?

RC: I have been a lifelong fan of comic books and comic characters. I was an early reader, and I remember loading up on newsstand DC books on our fishing trips to Homer, Alaska, as a very little kid. Later, in my pre-teen years, I was a heavy collector during the Marvel and Image booms of the early 90’s. I was a big collector of the original Eastman & Laird run of T.M.N.T. And my all-time favorite book is G.I. Joe by Larry Hama, which I practically have memorized, and still collect.

CYBORG USA is tailor-made to be a comic book. Zach and I held onto the concept for so many years because it never seemed like it should be anything else. The tropes we employ and the references we used all come from our deep love of the medium and its specific possibilities. At its best, CYBORG USA will hopefully evoke titles like The New Teen Titans and Uncanny X-Men, but with a twisted sensibility.CB: Tell us a bit about your creative team and what other creators (if any) have contributed to this volume?

RC: Our artist for Issues #1 and #2 is the great Argentinian artist, Pablo Romero. Our colorist for #1 is Lee Milewski, and for #2 is Michael Beacon. Our logo designer is Bob Stone. We have an exclusive cover for Issue #2 by the brilliant Caanan White, colored by Kid Ikaris, which will go to all backers. And my co-creator, co-writer, and partner is Zach Tabacco. 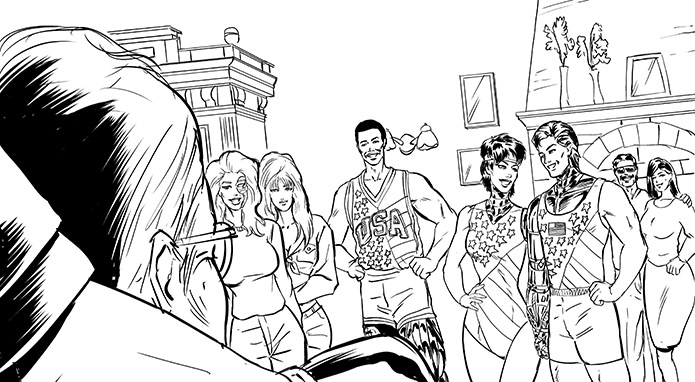 CB: What else can you share about the project? And do you have any final words for our readers?

RC: This idea is so close to me, these characters are truly alive in my imagination. My hope for this campaign is to find an audience of readers who want to continue along with us for future installments. Our idea is to continue this first wave of Cyborg USA stories for 12 issues. This is the start of a run, and we need for this campaign to be a huge success to continue the series as we intend.Each of our fundraising tiers includes Issues #1 and #2. We also are offering some special-edition Issue #1 tiers: one featuring the black & white line art, and another with an ultra-rare hand-numbered edition, printed to order. Our deluxe tier includes a CYBORG USA t-shirt, sticker, and wall poster. We are also offering a super-limited tier called CYBORGIZE YOURSELF, where you get all the exclusives, plus Pablo Romero will draw and color YOU as a cyborg inspired from our CYBORG USA universe. Everyone, please back our campaign on Indiegogo today! 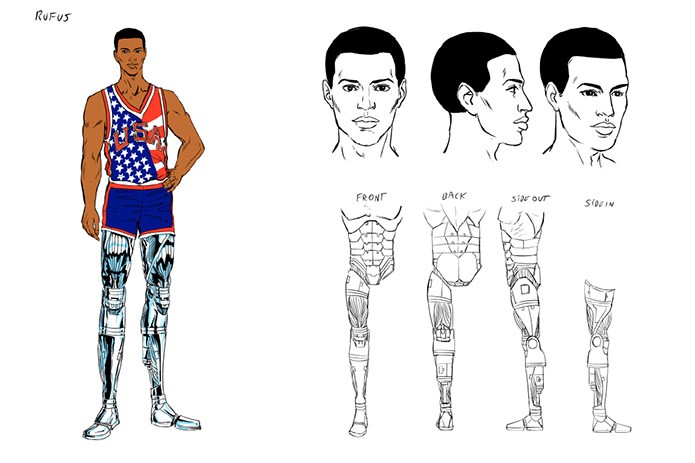 CB: Thanks for chatting with us Rob! Good luck and we are rooting for you!

Check out the Indiegogo campaign for CYBORG USA here!