Breaking news is that a gaming convention, GaryCon, just cut a guest of honor from their convention, Frank Mentzer, because of “harassment” allegations. Frank is a legendary RPG designer, but apparently the convention circuits seem to be stepping up their nonsense in recent weeks since the Vic Mignogna allegations in Anime. And, as usual, conventions are trying to out-woke each other.

Frank is one of the original developers on Dungeons & Dragons. If there’s anyone who should be a guest of honor at a gaming convention, he definitely fits the bill qualifications wise. His AD&D supplements were some of the most renowned in the industry in the 1980’s.

The “controversy” surrounding him started about a year ago when screenshots were released from 2015 where started being overly-flirty with Jessica Price, a game developer who is famous for rabble rousing about feminism and it getting in the way of her work with Guild Wars. They appeared to be friendly at first, but Frank made some pretty lame moves via DM, which Price later posted to show how “horrifying” it is to be a woman in gaming: 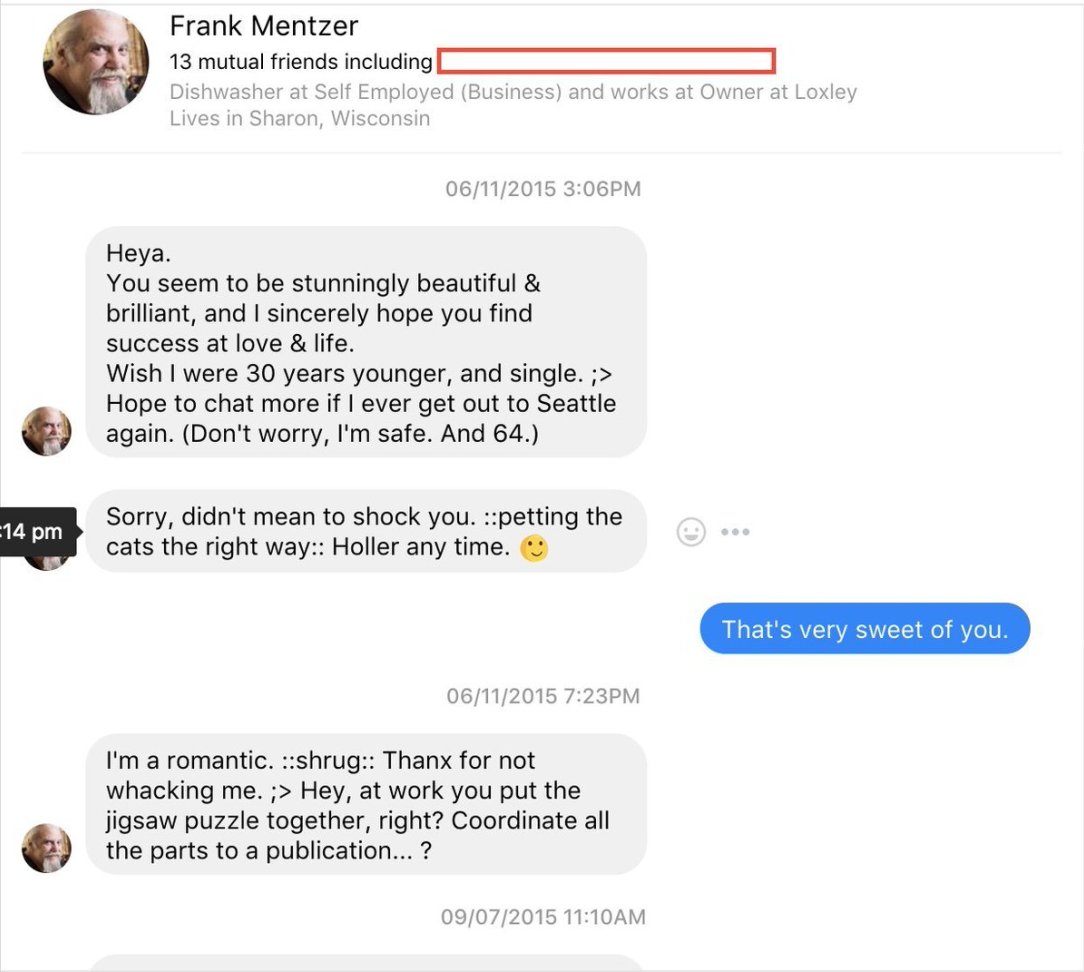 Pretty lame grandpa-boomer flirting, but nothing that mattered whatsoever, until Price decided to rabble rouse about it on social media. She made post after post about feminism, and how horrible and condescending it is, and of course, Frank as he started to take heat, took exception.

He attempted to speak with her privately, but it had escalated too much and Price wanted to make a “cause” out of this. And so his persistence in trying to make things right and stop the nonsense was met with hostility.

This is paraphrased–I had to delete the post after I repeatedly asked Frank to stop commenting, and didn’t anticipate I’d need screenshots.

Several of my friends who are sexual assault survivors show up to say, “Yes, this is a normal response.”

I see him typing a response after asking him not to contact me again, so I block him.

Of course Frank was upset, and of course he kept commenting. Unfortunately, that’s how you lose internet fights. Every time he comments trying to defend himself, it just “proves” to the SJWs he’s a “real harasser”. And it just digs him a deeper hole, even though he has every right to be outraged by the attempts to destroy his career with remarks like this.

It’s the double standard of social media, and because Price is a woman on the internet, of course her white knights came out in force to really overblow this and dehumanize Frank. An awful situation, and a man takes a critical hit of damage for some pretty innocuous comments.

A year out, after it’s died down, a small time convention decides to make a stink about it to show how woke they are. We’ve seen this sort of thing happen before at a lot of cons in the last couple of years — OdysseyCon, when their guest, a woke World of Darkness writer decided to flip out about one o their staff members. Their capitulation killed their convention. Origins Game Fair did similar with Larry Correia, and we’ve yet to see the damage to their reputation though there have been thousands of calls to never go to that convention again. Now we have this one.

GaryCon’s official statement is of course riddled with word salad that doesn’t mean much. They give no specifics, but lean on generic “harassment” claims typical of defamatory statements. It states: “His past misconduct and threatening behavior violate the ethics and harassment policies established by Gary Con.” Also: “This form of toxic aggression is detrimental to the safe space we as a gaming community strive for.”

Frankly, it’s not safe as a white male to go to any convention if you’re someone of notoriety at this point. You can get accused of anything. Best advice I can take is ALWAYS bring your wife, keep the Mike Pence Rule in mind at all time, and never talk to women in your industry. You should assume they’re just there to make drama and destroy your career so they can get ahead. It’s the sad truth, but when legends of the industry aren’t safe, you shouldn’t presume you are.

BTW, I write better female characters than most women do, and that can be seen in my comic, Flying Sparks! Check it out on Amazon here. Volume 2 will be coming to Kickstarter soon and you will want to be caught up.

Why Casino Gaming is Perfect for Geeks and Nerds
The Convenience of Using Sports Betting Apps for Placing Bets Online
Board Games? More Like “Bored” Games: Make the Shift to Online Gaming
With Absolute Power: Why the #MeToo Movement Was So Easily Corrupted
It's Time to Take Back Our Culture & Entertainment from the Left
Catalyst Games Lab Caves to Cancel Culture; Fires Long-Time BattleTech Writer
Gamer 101: A Quick Guide To Online Gaming For Beginners