Perhaps you’re blessed enough to be ignorant of ‘Growly.’

Suffice to say, he’s earned multiple convictions for engaging in the sexual abuse of children.

Our petition was more than simply ignored, but we’ll get to that shortly, along with an important revision in light of recent events.

Why is Growly relevant now? Because our policy would have prevented everything you’re about to read.

Sure, after his convictions he served as staff with [REDACTED]con for a time, and has been drifting around the convention scene like a pungent Five-Nights-At-Freddy’s extra ever since. But it was only recently that convention staff saw fit to put him front and center- literally.

This, just after Growly was scheduled and announced to be in charge of an all-ages interactive panel at a totally separate convention.

Twitter was aflame with attendees pointing this out to the official convention accounts, which ignored them or furnished ‘legal’ excuses for inaction.

Yet when the target is truly dangerous, conventions can ban an individual from events in a heartbeat. Just ask ‘2-Gryphon.’

One complaint over twitter, and within a sharp 24 hours the comedian(?) had his ten-year-anniversary invitation rescinded. The complaint alleged that 2-Gryphon was a danger to children, because he is a…

2-Gryphon is in a romantic relationship with a trans person who disagrees with that characterization, but this did not prevent the convention from acting with alacrity. 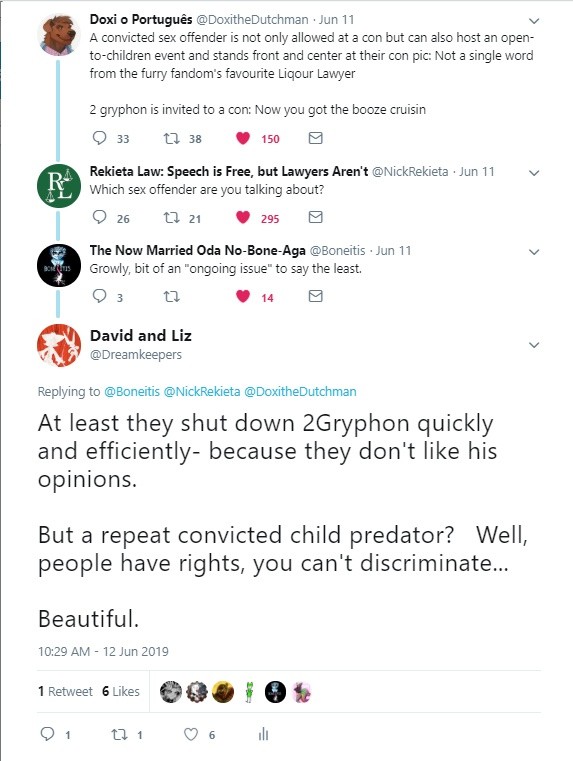 So if they can boot comedians, why not convicted criminals?

Last year, I imagined our common-sense solution would be embraced by convention staff, but I was dismayed to hear the opposite. Behind closed doors they discussed our petition, chose to avoid addressing it openly, and instead formulated flimsy objections.

They vary in absurdity, but the most depressing and durable excuse?

Convention staff seemed to think that banning convicted sex predators from all-ages events would generate liability for those events.

For months, this claim puzzled me. I thought it was the law to keep folks on the sex-offender-registry away from children. How could conventions have it so backwards?

The 2-Gryphon fiasco finally uncovered details on their legal thinking.

A furry lawyer (I’m not sure if he wants to be publicly credited, he went radio silent as soon as I had follow-up questions) responded to my inquiry with a few tweets, and explained the specific case-law that has been propped up against our policy. I’m paraphrasing him here: (Also please note, he clarified his view doesn’t represent a personal opinion regarding the situation, but strictly a legal one.)

“If this policy were adopted, it could be argued to be an ‘acknowledgment of duty of care,’ and therefore increase the liability risk for conventions. Rabutino vs Freedom State Reality Co. creates a genuine issue of material fact in liability if an organization is aware of a potential danger and assumes steps to manage it, even if they otherwise would not have such liability.”

I read up on the case. It surrounds a wild drunken hotel party with hundreds of people that ended with guns blazing and 3rd-degree murder charges.

I’m no lawyer, just some brilliant cartoonist. But the basic furry claim here is:

Call me crazy, but my reading of Rabutino seems to indicate the exact opposite of this claim.

The case law seems to indicate furry conventions (and their venues) already possess a degree of liability, and that by failing to implement safeguards and reasonable policies, their legal exposure is exacerbated.

So if convention staff aren’t compelled by morality to prevent convicted predators from mingling with children, or interested in sidestepping twitter outrage mobs, or inclined to prevent their dismal public image from becoming ever-more-tarnished, perhaps they will act when they realize that their liability could be greater than they were told.

Do conventions have their liability issue backwards? Come along with me, perhaps by using the superpower of ‘Giving a Crap For Ten Minutes,’ we can find out together.

Following are excerpts that seem pertinent from ‘PREMISES LIABILITY FOR THIRD PARTY CRIME,’ an overview involving the Rabutino case by Maiello Brungo & Maiello, attorneys at law. Let’s fire up that armchair.

“…The hotel owners knew or should have known about the dangers presented to the party guests.”

“A possessor of land who holds it open to the public for entry for his business purposes is subject to liability to members of the public while they are upon the land for such a purpose, for physical harm caused by the accidental, negligent, or intentionally harmful acts of third persons or animals, and by the failure of the possessor to exercise reasonable care to

(a) discover that such acts are being done or are likely to be done, or

(b) give a warning adequate to enable the visitors to avoid the harm, or otherwise to protect them against it.”

“If the place or character of his business, or his past experience, is such that he should reasonably anticipate careless or criminal conduct on the part of third persons, either generally or at some particular time, he may be under a duty to take precautions against it…”

“The court supported the jury’s finding that this was knowledge sufficient to create a duty to take precautions.

“if the experts’ recommendations are known and not implemented, and such information may support a plaintiff’s claim of negligence.”

“One who undertakes, gratuitously or for consideration, to render services to another which he should recognize as necessary for the protection of a third person or his things, is subject to liability to the third person for physical harm resulting from his failure to exercise reasonable care to protect his undertaking, if
(a) his failure to exercise reasonable care increases the risk of such harm, or

(b) he has undertaken to perform a duty owed by the other to the third person, or

…To illustrate this point, if a property management agreement contains a clause such as, “…Property Manager shall provide and maintain adequate and sufficient security at the premises…,” then the property manager can be deemed to have contractually assumed the duty of determining the reasonable necessity for security and its adequacy on behalf of the property owner, visitors to the center and possibly the tenant businesses.”

Finally! The ‘more liability’ argument emerges, if you squint very hard. Venues which make security guarantees might be liable for neglecting to uphold those guarantees.

But you’ll note, our policy proposal does not guarantee anyone security, or promise safety. It simply tells convicted child predators they’re not welcome at the event. Although in the interests of being fair to furry conventions and their whisperers, this appears to be the tiny misplaced grain at the core of their backwards fear.

A fear which I solve at the end of this article, just as though it were valid.

“Alternatively, contract language in a property management or security services agreement could expressly state that this liability is not shifting to the property manager…

…Pennsylvania courts will enforce clear exculpatory clauses in contracts which may release, or limit, negligence claims against a party”

Non-lawyer Dave provides you with the following clause for attendee agreements:

[Convention] policy and security measures shall not be construed as constituting any guarantee of safety towards individuals in attendance. Attendee agrees to hold [convention] and [venue] harmless for any harm, abuse, harassment, or damage to one’s person that may be incurred by 3rd parties, or other attendees, who are acting in contravention of [convention] policy. By appearing at [convention] the signee indicates that they understand the risks inherent in populous events, and their attendance constitutes a waiver of any claim against [convention] or [venue].

I would’ve liked input from a lawyer on my above opinions, and on the utility of the exculpatory clause that I pulled out of thin air, and I asked for that input; but received no reply. It would seem furry attorneys spontaneously volunteer their legal opinions only when seeking to undermine our policy proposals. When it comes to being constructive, we are left without the benefit of their vast legal wisdom.

“There is no way to guarantee, regardless of the measures taken by a possessor of land, that a person will not be sued for negligence in providing premises security. However measures can be taken to defend against such a claim. A property owner or possessor of land must first be aware of the duty to take reasonable care to evaluate the likelihood of criminal activity at the premises, and to appropriately police and secure the premises.”

Believe it or not, I love furry conventions. I love the fursuits, the art, the performances, meeting friends and fans. That is why I’m saying all this, because there is a major problem growing in these events which needs to be solved, and it seems everyone in charge is doing the opposite of solving.

I understand that some furry community leadership prioritizes public image, media management, and optics above all else. Perhaps they fear enacting this policy might look bad, because it acknowledges the existence of a problem.

Convention staff: consider our proposal. It’s already been adopted by two conventions, no problem. Consult competent legal counsel, but I believe doing the right thing will also radically reduce the liability to your event and your venue.

Attendees: I know everyone loves raging on twitter and getting those ‘likes’. Pure dopamine! But consider our policy, or drafting one like it, and engaging with the events you attend until they can meet a standard of decency that obviates the need for future tweet-threads.

And old-school furry gatekeepers: The only thing worse than bad press is bad press that you genuinely deserve. This article isn’t antagonism- it’s a warning klaxon. The control panel requires your attention.

The Furry Fix for Divisiveness: BLOCKLISTS