The Jester’s Festival is a holiday event that typically takes place in March and April. It is also known as Jester’s Day and the Festival of Fools. It is an annual holiday that falls on the 28th of Rain’s Hand.

During the event, troupes of jesters and fools encourage the people of Tamriel of all walks of life to celebrate the foolish and absurd. Performers roam the streets and openly mock the powerful, towns celebrate with festive pranks, and silly games are held with joke prizes rewarded as an incentive.

The origins of the Jester’s Festival are speculated, with some stating that it originated with Sheogorath once turning the whole world mad, or that it sprung from Mer emulating a caricature of Men. A notable feature of the event is the inclusion of Jester’s Festival Boxes — special reward containers that grant players various event-themed items.

There is a holiday event named Anniversary Jubilee in the game that typically takes place in April and May. It is a yearly celebration of the release of Elder Scrolls Online. During this event, players can obtain a 100% XP buff and the opportunity to acquire a variety of items. The festival also has a special quest associated with it, named Ache For Cake, which repeats every year. A notable feature of the event is the inclusion of the Anniversary Jubilee Gift Box — special reward containers that grant players various event-themed items. 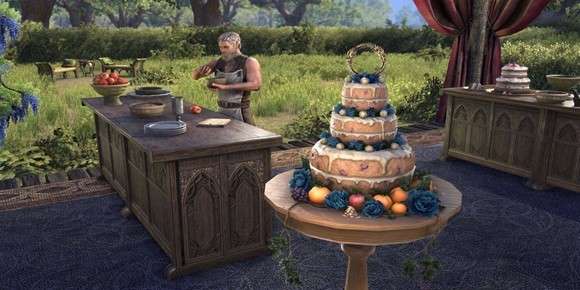 The Summerfall event allows owners of the Summerset Chapter to participate in a special event activity that involved visiting all ten of the Striking Locales across both Summerset and Artaeum and unlocking the Summerset Pathfinder Achievement.

Each Summerset Pathfinder achievement unlocked by a player contributed to a running total, which was updated each day of the event.

Midyear Mayhem has been announced as the first event of 2021. Midyear Mayhem is a holiday event that typically takes place in July. The event is a celebration of Pelinal Whitestrake‘s victory against the Ayleids in a pivotal conflict known as Pelinal’s Midyear Massacre.

During the Midyear Mayhem PvP event, you can battle in the Alliance War, Battlegrounds, and Imperial City and you’ll earn bonus XP, collectibles, and more. But when will it begin?

The Midyear Mayhem in-game event for Cyrodiil, the Imperial City, and the Battlegrounds began on Thursday, January 28 at 10:00 AM EST, and the fight continues until Tuesday, February 9 at 10:00 AM EST.

During this action-packed event, you can earn bonus rewards when battling your fellow players in PvP activities, including double XP and Alliance points and event-specific collectibles, Achievements, and titles. But how will you join the fight?

Here is how you can enter the event and take part in the fight:

The Scroll of Pelinal’s Ferocity will continue to be usable throughout the entire event, but if you happen to lose it, you can receive another from Predicant Maera or simply use the Basin of the Gore Virtuous instead.

How is it different from the previous Midyear Mayhem event?

In addition to the rewards from previous Midyear Mayhems, in this year’s Midyear Mayhem Event, the new Ebonsteel Knight armor style pages have been introduced.

Pages have a chance to drop from bosses in the Imperial City but are also available from the Impresario for 5 each. The corresponding weapon styles are only available from the Crown Store by purchasing the limited-time Ebonsteel Knight Arms Pack during this event.

This Midyear Mayhem event also introduces a brand-new series of base and upgrade fragments for the year. These fragments will allow you to summon the new Unstable Morpholith pet and eventually upgrade the pet into different items throughout 2021.

The Orsinium Celebration Event is a holiday event that typically takes place between August and November to celebrate the release of the Orsinium DLC. The main feature of this event is that Wrothgar Dailies and Maelstrom Arena rewards are doubled, as well as harvesting nodes.

The Imperial City Celebration Event is a holiday event in the game that typically takes place in September. The main feature of this event is numerous drops are doubled, including Tel Var Stones, Key Fragments, items dropped by Trove Scamps and Cunning Scamps, and all boss loot.

The main feature of these events grants players double drops from group bosses, delve bosses, and regular nodes in the Hew‘s Bane and Gold Coast zones. Defiled Whiskers drops from Maw of Lorkhaj bosses also doubles. Rewards for completing daily Heists and Sacraments increase for the duration of the event.

During the event, the denizens of Tamriel defy their superstitious fears. Ghosts, demons, and evil spirits are mocked and celebrated by both occult occurrences and outrageous costumes. Beggars take to the street and ask for alms, while children ask for festival treats, and people are obliged to provide them with it.

Pumpkins are iconic within the Festival. It is a tradition intended to test dexterity known as Autumnal Ornamental Gourd Triple-Toss, wherein they juggle pumpkins. Festival-themed foods are intended to look ghastly, with naming schemes fitting the theme. Three examples are Frosted Brains, Bowls of “Peeled Eyeballs“, and Bewitched Sugar Skulls.

The Undaunted Celebration Event is a holiday event that typically takes place in November. The event is centered around the Undaunted faction, teaming up with other players and completing Group Dungeons. A notable feature of the event is the inclusion of Undaunted Reward Boxes, special reward containers that grant players various collectibles, style pages, costumes, pets, mounts, and even homes.

The New Life Festival is a holiday event that typically takes place in December and January. It was originally the celebration of the sun god, Magnus, but over time it changed into a celebration of the gift of New Life, heralded by the sun. The New Life Festival also marks the start of the Winter Solstice, when Magnus the Sun begins his return, and the days start to grow longer. Celebrations include races, feasts, games, and dancing.

The gameplay is mostly non-linear, with a mixture of quests, random events, and free-roaming exploration of the world. The game does not provide a mode for single-player offline play, although the developers stated that there would be “plenty of content” designed to accommodate players who prefer to play solo.

The player can play in ten different races:

Players must choose one of six classes when creating their character: Dragonknight, Sorcerer, Nightblade, Templar, Warden, or Necromancer. Each class gives the player various attacks, spells, and passive effects. The game has other character choices beyond those of race and class, such as the player character also being able to become either a vampire or a werewolf, each of which grants its skill tree. There are seven different crafting skill lines: Alchemy, Blacksmithing, Clothier, Enchanting, Woodworking, Provisioning, and Jewelry Crafting.

A lot of big gamers have reviewed the game and most of them enjoy it. If you love MMOs, then you should give ESO a try. It pulls you in and provides a world you can get lost in. It’s amazing, massive, and is filled with loads of fun. And of course, if you need to buy ESO gold ingame, SSEGold will always be your best choice here.