The partly superhero-themed parade has been a fixture in the Vermont town of Rutland since 1960,  under the aegis of the late Tom Fagen, who often turned up in costume as Batman. 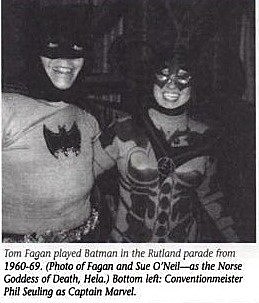 Marvel and DC writers/artists enjoyed the event, with this old still from 1972 showing Len Wein and Marv Wolfman getting into the spirit of the evening:

Len (Wolverine) Wein as Morbius, soon to be a Sony picture released later this year.

The parade featured in both Marvel and DC comics, where typically villains would take advantage of the confusion over who was actually a superhero/villain (or just a early cos-player) to cause havoc/mayhem etc. 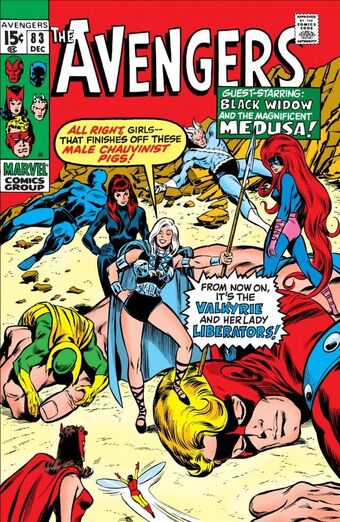 The legendary Roy Thomas also put in an appearance (Fagen dressed as Nighthawk), in Avengers #83 (Dec 1970), where The Lady Liberators (last seen in Avengers: Endgame) made their debut.

In the early Seventies the vibes were such that storylines actually crossed from Marvel to DC over in a loose three-part storyline featuring writers from both outfits, where DC costumes could been seen in the Marvel Universe – and vice versa (image from Marvel’s Amazing Adventures #16):

“Does Rutland, Vermont, annually become a nexus of realities similar to that existing in the swamp near Citrusville Florida (Man-Thing etc)?“

“While the nexus in Citrusville is a natural aperture, the nexus near Rutland is an artificial one that fluctuates in size and accessibility. For reasons that I have not investigated, it has not been opened in recent years.”

In 1986, the parade again appeared in WaRP Graphics’ Thunderbunny #5. The town of Rutland was portrayed in DC’s Animal Man #50 (1992), but not the Halloween parade itself. Most recently, the parade was featured in Marvel Comic’s Generation X #22 (1996) and Superboy and the Ravers #16 (1997) from DC Comics. To my knowledge (admittedly creaky) that appearance may have been the last time, which is a shame, since the stories linked to an actual event were kinda cute.