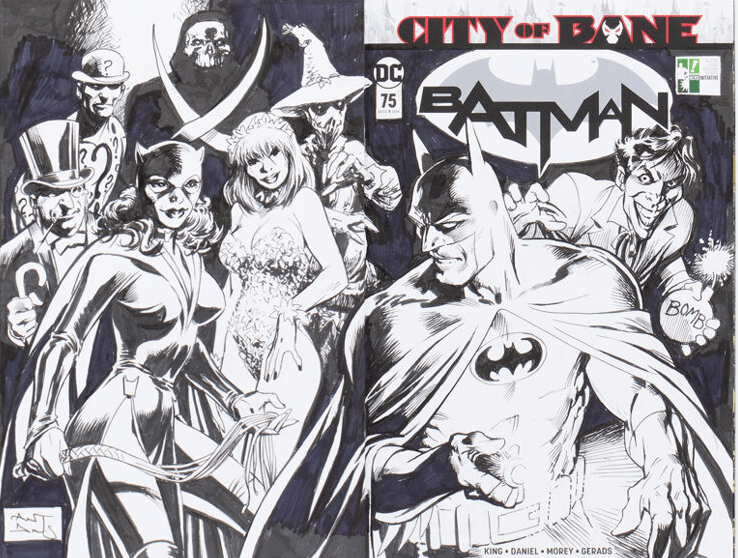 Saturday afternoon, Heritage Auctions sold 110 original Batman No. 75 covers illustrated by some of the industry’s best and best-known names, among them DC Comics Creative Officer and Publisher Jim Lee, Eisner Award-winner Arthur Adams and The Dark Knight Returns’ creator Frank Miller. And when the final hammer fell, less than an hour after the sale began, The Hero Initiative’s Batman 100 Project hammered at $98,535 thanks to the participation of more than 340 online bidders.

That money raised will go to writers and artists who might otherwise be unable to pay for rent or food or cover hospital bills.

The nonprofit Hero Initiative, now in its 20th year, began auctioning these singular one-offs in 2007, starting with The Spider-Man 100 project. In years past these covers were sold during comic conventions and through retailers. But because of the global pandemic, DC Comics and the Hero Initiative made The Batman 100 Project available exclusively through the Dallas-based auction house.

“It was Heritage’s honor to be associated with The Hero Initiative this year,” said Heritage Auctions’ Vice President Barry Sandoval. “It’s always rewarding to see an auction do so well, but it’s doubly so when the money raised goes to benefit such a good cause.”

The total price realized for the auction was $118,242, which includes buyer’s premium on each cover sold. Heritage Auctions donated its entire seller’s commission for this event, and had each issue graded and slabbed by Certified Guaranty Corporation before the auction began. 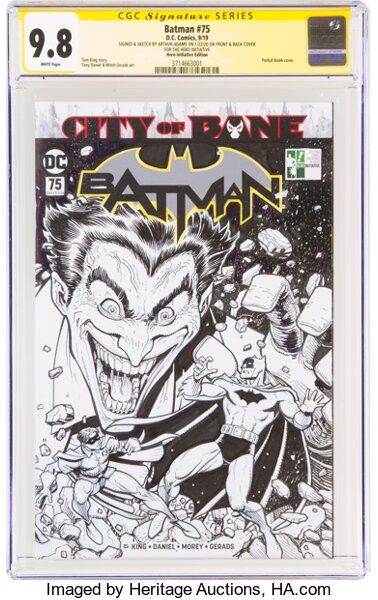 Art Adams can boast having the auction’s top lot: His stunning wraparound cover, featuring Batman, Robin and the original Batwoman squaring off against the Joker, kicked off the sale and hammered at $4,560. Lee’s squared-jawed Batman sketch was a close second at $4,080, followed by Alan Davis’ wraparound featuring Batman and his rogues gallery. It sold for $3,820.

The Hero Initiative was co-founded in 2000 by longtime journalist Jim McLauchlin, and its disbursement board includes nine artists, writers and publishers, including Howard Chaykin, John Romita Sr., Ann Nocenti and Klaus Janson.

Since its inception, the nonprofit has helped more than 100 comic book creators keep roofs over their heads and food in their cupboards. It has also allowed them to visit doctors without worrying about mounting expenses. The Hero Initiative has covered medical and living expenses for Howard the Duck’s father Steve Gerber, colorist Tom Ziuko and, most famously, Will Eisner Comic Book Hall of Famer Gene Colan, who said before his death in 2011, “If there was not a Hero Initiative, I probably would have gone under. Hero picked up the slack and made sure I didn’t drown.”

“Artists began working on the Batman 100 Project last year, which feels like a very, very long time ago now,” McLauchlin said Saturday. “It’s always nice when a task reaches its endpoint, and we’ve completed this mission. But the ongoing mission of The Hero Initiative goes on. It’s a 24/7 job. And today I am grateful to the artists, DC, the bidders and Heritage Auctions for doing their part in helping us continue our mission.”

One of the Last of His Kind: A Look Back at Comics Artist Tim Sale
Better Than Ezra: Warner Bros. Begins Distancing from Flash Actor
Have Comics Become More about Writers than about Artists?
Frank Miller Presents Announces New Titles and Revivals for Sin City and Ronin
The Folly of Including Real Life Tragedies in Modern Comicbooks
Former Editor in Chief Joe Quesada Departs Marvel After 22 Years
Why Marvel Comics Losing the Conan License is Actually a Good Thing

Sorry Disney, the Top Amusement Park in the US is Dollywood