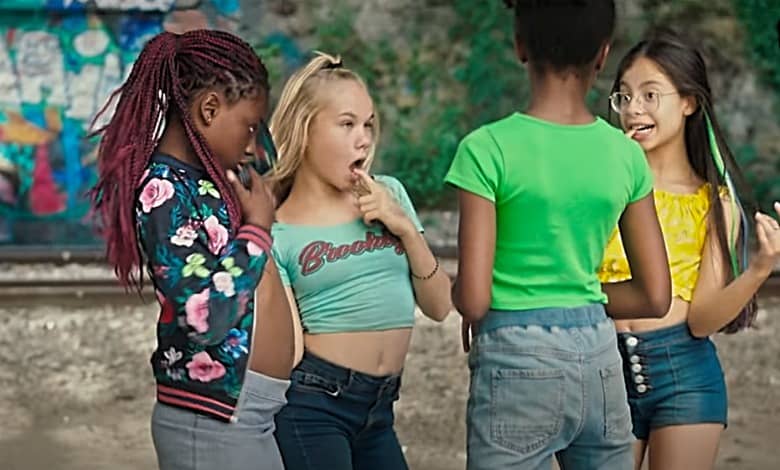 The French import, just added to Netflix’s content lineup, introduces us to a young girl, Ami, confronted with a rather mature dance group of her peers. She eventually joins the troupe, participating in a dance sequence brimming with crotch shots and other unfortunate visuals.

“I really put my heart into this film. It’s actually my personal story as well as the story of many children who have to navigate between a liberal western culture and a conservative culture at home,” explains Doucouré, who is of Senegalese descent.

To do so, though, Doucouré traffics in the very kind of exploitation she allegedly abhors. The film features salacious footage of young girls — think 11 years of age — bumping, grinding and more while wearing revealing outfits. The camera zooms in repeatedly on the girls’ crotches, dubious artistic choices to say the very least.

Netflix finally responded to the social media blowback to the film days after apologizing for the sexualized poster to “Cuties.”

Cuties is a social commentary against the sexualization of young children,” a spokesperson for Netflix said in a statement to media outlets on Thursday. “It’s an award-winning film and a powerful story about the pressure young girls face on social media and from society more generally growing up—and we’d encourage anyone who cares about these important issues to watch the movie.”

In other words, we’re not sorry for sharing this content with our subscribers. In an age teeming with apologies for microscopic “offenses,” the streaming giant isn’t ready to serve one up … or pull the film from its lineup.

At least not yet.

Politicians from both sides of the aisle, including Rep. Tulsi Gabbard and Sen. Ted Cruz, have slammed Netflix for adding the film to its content roster.

Deeply disturbing: Netflix aggressively promoting new movie sexualizing children. Hollywood should not be celebrating & making $$ off of the sexual abuse of 11-year-old girls. This is not OK. https://t.co/GYZMVvKBO4

Now, compare that to other situations when Netflix quickly bowed to the woke mob. Earlier this year the streamer removed episodes of four British TV shows, including “The Mighty Boosh,” due to actors donning blackface. The move came after the rise of Black Lives Matter following George Floyd’s death.

HBO Max swiftly pulled the big screen classic “Gone with the Wind” from its platform mere days after a black screenwriter, John Ridley, penned an op-ed critiquing the film’s treatment of the era’s slavery. The film eventually returned to the service, accompanied by a “trigger warning” style introduction.

Hulu similarly bowed to BLM sentiments in recent months, yanking an episode of “The Golden Girls” in which a character wore a muddy face mask that another character thought represented black skin.

The reaction is often far different when conservatives take a public stand against pop culture matters.