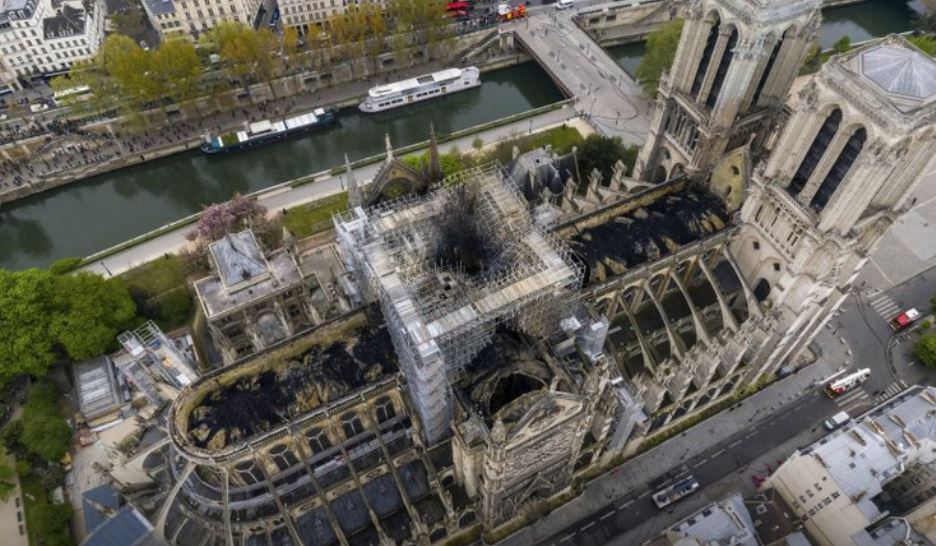 The Christian faith’s Holy Week began on a sad note as both believers and nonbelievers around the world looked on in despair while flames engulfed Paris, France’s Notre Dame Cathedral. It was a stark reminder that Western cultures no longer build anything as beautiful. It was also a reminder that in today’s culture, Christians aren’t allowed to ask difficult questions. Most of Western society’s embrace of relativism, hedonism and political correctness often leave people of faith afraid to speak. And those who do are swiftly shouted down by online hate mobs and other organized efforts to discredit their beliefs.

The live shots of flames ripping through Notre Dame brought many Christians to their knees worldwide. The “official story” is a construction accident caused the blaze, despite no construction workers on-site at the time of the fire. An elected French official on Fox news mentioned “we’ve had churches desecrated each and every week all over France, so of course you will only hear the story of the politically acceptable which will tell you it is probably an accident.” He was immediately cut-off, FOX News’ Shepard Smith saying there would be “no speculation” on his watch. Mainstream news and other media provided a warning, Christians questioning the official narrative are not to be tolerated.

Photos circulated of a gold cross at an alter in Notre Dame Cathedral surviving the fire. The Holy Cross bathed in light gave the disheartened a feeling of hope, with some declaring it a miracle. Many Christians felt a sense of relief after the destruction of a religious landmark was thankfully deemed unacceptable. But soon enough, online trolls began mocking them in the comment sections and all across social media. Of course, this is nothing new for Christians. Insulting those who follow Jesus Christ as their Lord and savior happens so often these days that it’s beyond cliché.

Christians have become easy targets in the culture today. The Christian faith teaches that forgiveness is divine, while the chances of punishment for insulting Jesus Christ in this world are very low. Even His very name is considered a curse word by many. Politically Correct (PC) culture allows for that, and oft times even attempts to uproot Christianity from the fabric of Western culture.

Hollywood and entertainment are at the forefront of PC culture and attacking Christian beliefs. In fact, annual awards shows are downright obnoxious with anti-Christian demonstrations. Some want you to believe Christians, especially the white male variety, are the root of all evil. 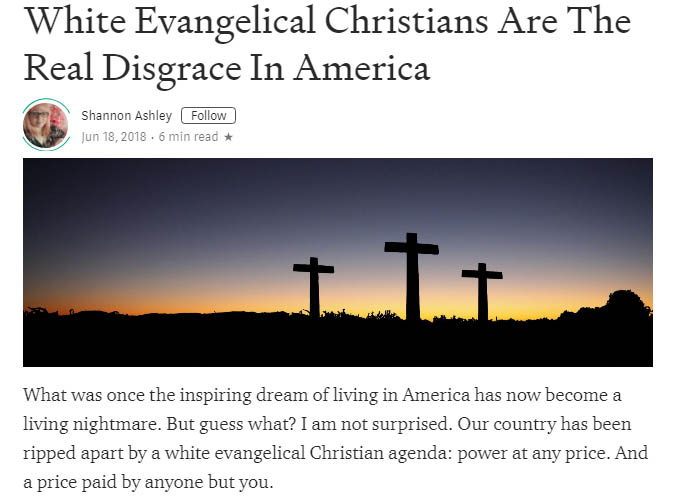 Sadly, for me, my own geek culture is also not immune to attacks and mockery of Christians. DC Comics writer Mark Russell (The Flintstones, Red Sonja, Wonder Twins) is one of those in geekdon that’s leading the charge against Christians. His 2011 graphic novel God Is Disappointed in You is a biting satire of the Holy Bible. The book claims to be an “irreverent yet faithful” retelling of the Bible. It’s certainly irreverent, but is full of scorn, and can’t truthfully be described as faithful. When CBR questioned him about mocking Christians he said, “I’m not terribly concerned with how it might “seem” if I feel my interpretation is honest.”

Russell’s response was eerily reminiscent to Kevin Smith’s when Smith was confronted about his film Dogma, a movie that mocked Catholics. If Mark Russell’s purpose wasn’t to mock Christianity, he has an odd way of showing it. Russell followed up that book by lampooning non-canonical Christian and Jewish texts with his next book Apocrypha Now. As a “respected” comic book writer, Russell has been busy penning the upcoming Jesus Christ spoof comic Second Coming from Ahoy Comics (after being cancelled by DC Comics following backlash). And also for DC, when he’s not mocking Christians, he likes to insert orgies and bestiality into kids cartoon properties.

Last year, on Palm Sunday, Image Comics creator and Chief Financial Officer Erik Larsen targeted Christians on Twitter. He posted a meme comparing the Holy Bible to a Spider-Man comic with a caption stating “Proof that GOD exists” and “Proof that Spiderman exists.” This is open contempt for Christians, and is directly from an executive at the third largest comic book publisher in North America. And this tweet is still up. A week later, on April 1, which was Easter Sunday last year, former Marvel Comics editor Heather Antos posted “HE HAS RISEN!!! JK (just kidding) April fools.” Neither of these attacks were provoked, yet were indicative of the acceptable, continuous attacks on Christians and their deeply held beliefs.

Denouncement and antagonistic attacks like these from entertainment and geek industries are unavoidable parts of movie and comic culture for Christians. So, should followers of Christ abandon their favorite hobbies and flee social media? Is it time for people of faith to acquiesce to their harassers and simply stop identifying as ‘Christian’ altogether? Surely avoiding conflict and criticism would be the safest course of action, no?

I believe it’s time for Christians to stand firm, band together, and stand up to this kind of ridicule and hate as a family. People of faith can’t allow bullying and mockery to drive them from their beloved hobbies and passions. Despite what some would have you believe, Christian communities still thrive in geek culture. It’s time Christians fly their flags of faith higher than ever and let industry leaders know we will be treated with dignity and respect. Christians should serve as living witnesses of grace and love in the face of persecutors while resisting the desire to fight fire with even more fire.

Social media and online culture have become breeding grounds for hateful rhetoric and trolls. It’s time we helped make Twitter, Facebook and Instagram fun again and talk about the things we love rather hate. This includes movies, music, comic books, and most of all our faith. It’s time we back each other up in positive ways and show those looking for encouraging communities that being saved by grace is a free gift for all.

Am I saying that if you read or consume something that’s really awful, you should never mention it again? Of course not. Drop a post about why it sucks and move on to the things you enjoy. Getting stuck on all the bad stuff produces negative mindsets and you might miss out on all the good!

YouTubers Douglas Ernst and David Stewart are great examples of fighting fire with the grace and truth that’s paramount to making Christian voices heard. When movies with Biblical themes like Alita: Battle Angel arrive, we not only need to support them, we need to spread the word. Far left entertainment media tried to tank the film due in part I think to its Biblical symbolism that goes against PC culture. Doug Ernst championed Alita on YouTube. His Battle Angel videos were viewed over 300 thousand times and counting! Think about how many people were influenced to see a great film with Christian themes due to Doug’s work alone!

David Stewart took a different approach on his channel. He detailed Biblical symbolism and themes prevalent in Alita: Battle Angel. It’s an excellent breakdown that, while its appeal is more limited, expands enjoyment of the film for Christians. The video is spoiler-filled and examines themes inspired by the Old Testament and book of Enoch. And David and Doug are merely two examples of Christians getting the word out in geek and pop culture. If you have a favorite YouTuber or blogger you want everyone to know about, throw a link to their site and description of their content in the comments. People are searching this content out every day!

When Christians find a new movie, TV show or comicbook with themes that respect or service our beliefs, we should remember to champion them enthusiastically. Every year it seems like good entertainment aimed at Christians dwindles. So, when you’ve discovered a comic that features themes of faith and devotion, remember to share it on social media. Publishers don’t frequently market to believers anymore, so most fellow Christians likely don’t know these books exist or are aimed at them.

With that in mind, I have some recommendations to make; two comic books and two movies specifically for this Easter holiday. The first is Alita: Battle Angel, for obvious reasons. There’s also a Manga called Battle Angel Alita available for book readers. My second film recommendation is Risen starring Joseph Fiennes. It tells the story of Clavius (Fiennes), the Roman Tribune investigating the disappearance of Jesus’ body following his crucifixion. It’s a great movie that explores the resurrection from a non-believer’s perspective.

My first comic book recommendation is Valiant Comics X-O Manowar by Robert Venditti (Hawkman, Hal Jordan and the Green Lantern Corps). Specifically the first 3 trades collecting issues 1-14. It’s a science-fiction retelling of my favorite story of all-times, Exodus. It has heavy Christian themes throughout, and it actually got me through a very difficult time when my son was in the hospital.

My final Easter recommendation is Alterna Comics’ The Wicked Righteous Vol. 1 by Terry Mayo (Disposable Legends, The Wicked Righteous: Exodus). It tells the story of four brothers in post-apocalyptic San Diego where there are only two kinds of people left, the wicked and the righteous. There are Christian themes of brotherhood, redemption and faith through the book. If you have a movie or comic recommendation please place it in the comments so everyone can enjoy them as well.

It’s an interesting time to be Christian, when hostility seems to come from all angles trying to challenge our faith. As Christians, we need to stick together and enjoy our hobbies in spite of these efforts. There are newcomers to our hobbies who arrive daily and they will be watching us and seeing what kind of example we set. Grace and truth are the best qualities we can give the next generation.

I want to thank you so much for reading my thoughts during this very important Easter holiday. My wife, son and I would like to wish you and your family a wonderful Easter Sunday. 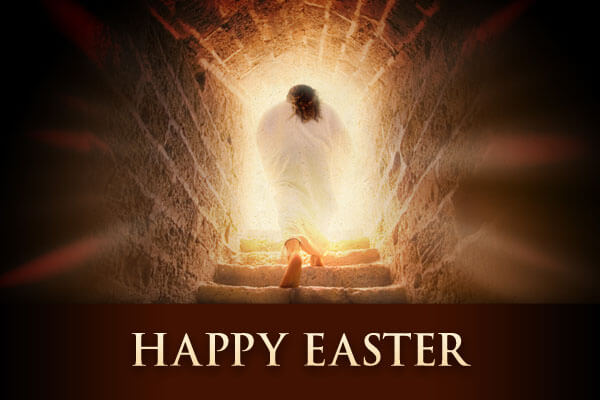