If you live long enough, one of the coolest things about science fiction is realizing what predictions have come true and which were way off.

For instance, in the latter category, virtually no one foresaw that as computer technology got more advanced, things would get smaller. Way smaller. Consider the classic “Colossus: The Forbin Project” from 1970 which had the world-usurping supercomputer housed inside an entire mountain. The original “Terminator” film followed this premise (although its more contemporary sequels wised up).

Give the circumstances of post-2020 election America, two scifi films more than any other appear to fit the former category: 1975’s “Rollerball” and 1988’s “They Live.” The former takes place in that “future” year of 2018 (never explicitly noted in the film) where political nation-states have dissolved and the masses are governed by powerful multi-national corporations.

According to a 2019 Slate article, there are six mega-corporation/city-states in the “Rollerball” future: Transport, Food, Communication, Housing, Luxury, and Energy. Each has its own Rollerball team, with the last one (HQ’d in Houston, Texas) being the best. 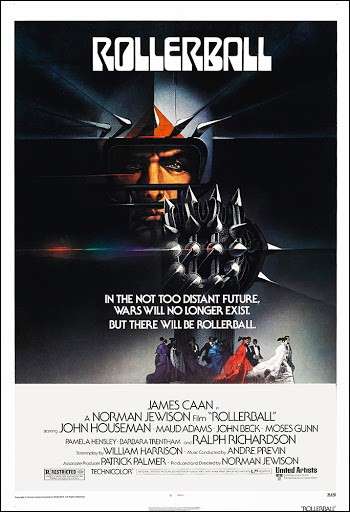 The “Rollerball” world, Slate’s Devoney Looser writes, “is divided into stratified social classes: the have-it-all executives, pulling the strings; the pampered but short-lived celebrity athletes, kept in the dark; and the have-just-enough working classes.” In that middle category is the best Rollerball player alive, Jonathan E played by James Caan, who comes to realize just how precarious his fame really is. Jonathan’s boss, Energy Corporation head Mr. Bartholomew (the masterful John Houseman), wants the star to retire; no one person, after all, can be greater than the team. 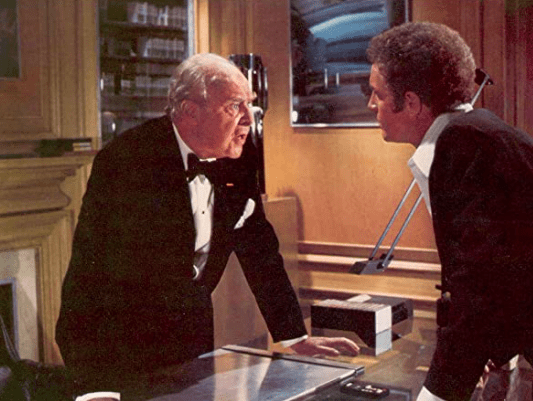 However, Jonathan resists Bartholomew’s edict, and his reasons have more to do with just wanting to stay in the spotlight. Years before, an Energy Corporation bigwig took a liking to Jonathan’s wife … and the social power structure being what it is, took her for himself. As you might imagine, not only does this royally piss off Jonathan, but it serves as the catalyst for his overall disillusionment. 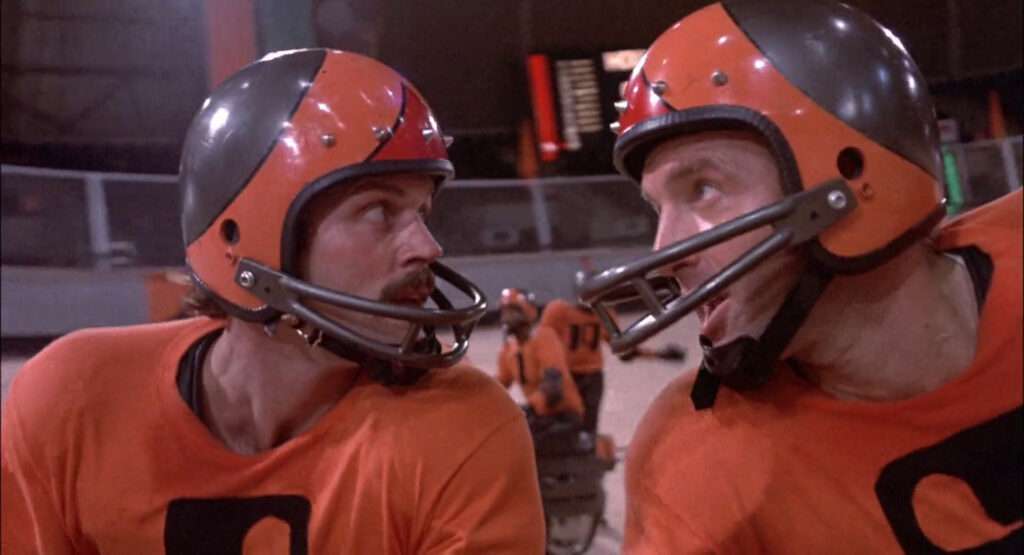 Jonathan proceeds to dig– or at least attempts to dig — into corporate and world history to see how things came to be as they are. But the corporation cadre has sanitized history — much like our current giant tech corporations have done, and are really beginning to do in earnest.

[W]atching Rollerball today, I find it difficult to conclude that what’s missing is comedy. There’s little humor now in watching millions of people cede personal information to manipulative corporate overlords […] When the camera lingers on the faces of athletes, standing at bored attention during the playing of the “corporate anthem,” it’s more than a little moving. Eventually, we realize players are sizing each other up before a match in which several will die. We watch knowing that they live in a world in which protest has been quashed.

Indeed, just this week one of those “manipulative corporate overlords,” Facebook’s Mark Zuckerberg, claimed he wasn’t even aware of a program his company uses to track users not only on the Facebook platform, but across the entire internet. FOX News’s Tucker Carlson (one of the few remaining sane voices anywhere in big media today) noted this program, dubbed “Centra,” was the product of the Left’s obsession with Donald Trump’s supposed collusion with Russia in 2016. In other words, one of the biggest and phoniest events in American political history was used to vastly expand the surveillance capabilities of Zuckerberg’s mega-company.

Carlson also pointed out how Facebook colludes with fellow tech giants Twitter and Google to censor things they don’t like — which, coincidentally, happen to be things of a politically conservative nature.

Speaking of Twitter, its CEO Jack Dorsey told legislators in the same hearing featuring Zuckerberg that it “was wrong” to censor the New York Post’s story about Hunter Biden’s laptop (and the contents therein). Of course, this admission came conveniently two weeks after the 2020 election. Twitter has made a habit of admitting such mistakes, and weirdly these “mistakes” always seem to affect conservatives and conservative groups.

Speaking of which, have you ever made note of how Facebook and Twitter’s “warning” labels also are utilized in only one direction? Take a look at any tweet from President Trump about voter fraud — it’ll have a “This claim is disputed” marker pasted to it. However, Hillary Clinton and former Georgia governor candidate Stacey Abrams, to name but two, never got — or get — such disclaimers on their election-disputing tweets.

Most science fiction entertainment scenarios like “Rollerball’s” involve fascism coming from the right (please — don’t lecture me with “well, that’s what fascism is”; the extremes of both right and left are indistinguishable); however, reality is showing just the opposite. In conjunction with the tech giants, the mainstream media actively suppresses news they find politically objectionable. After all, they could have reported on the Hunter Biden story despite Twitter’s censorship, but didn’t. Hilariously, they made excuses about the story’s “reliability,” hoping people wouldn’t remember how they hawked each and every “witness” to now-US Supreme Court Justice Brett Kavanaugh’s alleged debased sexual behavior… and, again, the whole Russian collusion fiction. 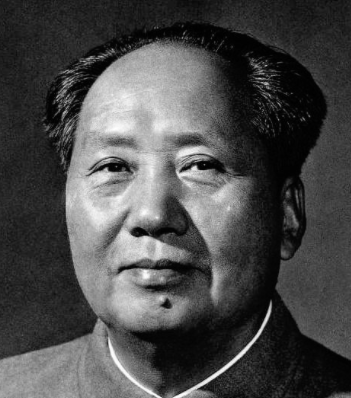 What we’re seeing creeping in on America is akin to that of the Chinese Cultural Revolution. As FOX News’ Tucker Carlson noted, the more and more Big Tech, in conjunction with government, censors you, the more people realize what is “permissible.” It’s bad enough when Twitter and Facebook do it; it’s worse when companies upon which laymen rely begin to act similarly. Email and internet providers shut down entities with whom they disagree. Services such as PayPal GoFundMe and Airbnb have done same. Credit card companies and banks have looked into restricting “controversial” purchases — like firearms.

Read my conclusion in part 2!