Because I believe that comics are for everyone, today’s Special Bonus installment of Indie Comics Showcase will present three Indie Comics that are either LGBTQ themed or have LGBTQ characters. Per usual, these are all currently being crowd funded.

The first comic I’m featuring today is Sunsets and Sodas. It is an LGBT comic about two best friends, Evan and Jason, who discover they may have stronger feeling for each other than expected. It all happens during their Senior Year of High School, no less. Sunsets and Sodas is written drawn by Tim Delaney aka Furious-teapot.

You can see more of Tim’s work and more of Sunsets and Sodas on his Instragam. 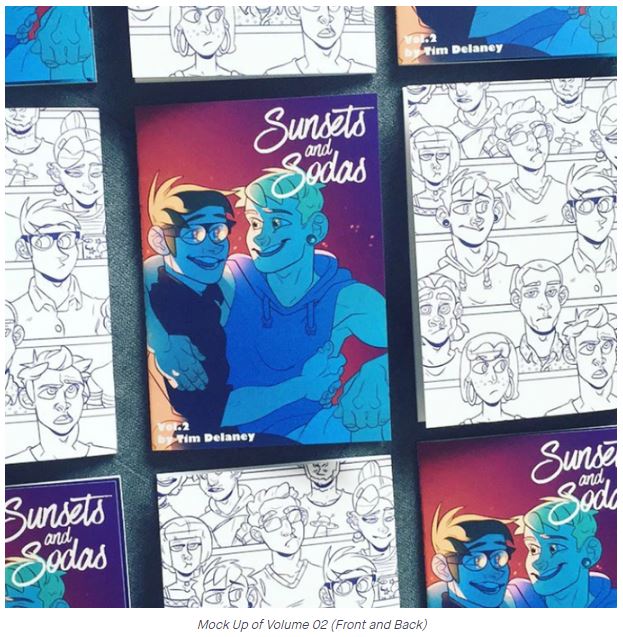 What first caught my attention was the name Sunsets and Sodas, It’s just perfect. The art style is whimsical and the comic is beautifully drawn. I feel it complements the story really well. Tim is a very talented queer comic book writer and artist. I know I talk about passion projects a lot on here, but this is definitely one for Tim. He originally started the project as a web comic, which he posted on his tumblr.

Tim then started selling small runs of the comic at conventions. Surprised by how well Sunsets and Soda sold, Tim felt it was time to bring Sunsets and Sodas into the world of printed comics, only bigger and better than it has ever been. Sunsets and Sodas is really charming tale of new found love. The characters are really well developed, as is the story. I have to think that it stems from some of Tim’s real life experience. If Sunsets and Sodas looks and sounds like something that you might be interested in, check out the campaign. 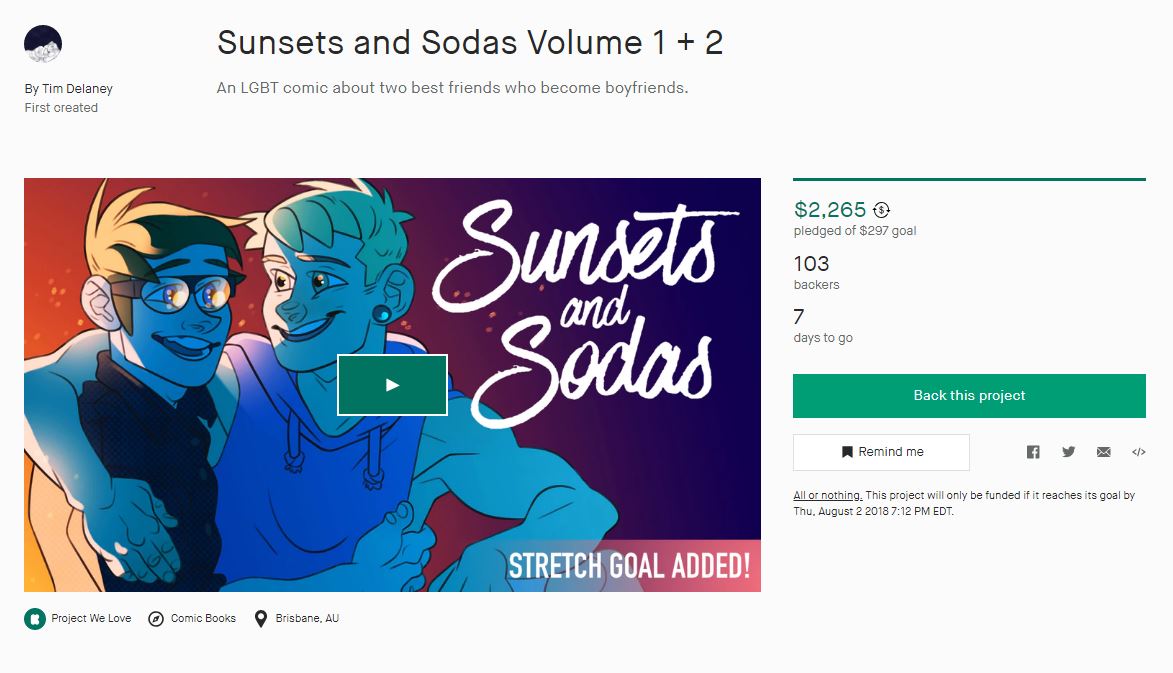 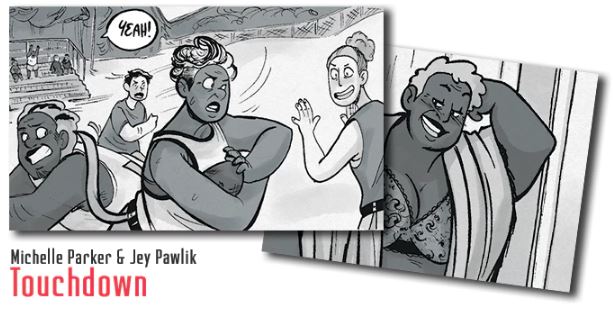 Apart from featuring LGBT Characters, SCORE! is also created by women, along with a non-binary artist and writers. This project is a collection of 17 of their stories. From what I have seen and read, the art quirky and fun and the stories are interesting and steamy. SCORE! was inspired by the wonderful and eclectic world of Sports Manga. The most popular and recent of which has been Yuri On Ice. Admittedly I love Yuri On Ice. It’s perfect. So I’m pretty happy to see that a couple of stories are directly inspired by it. 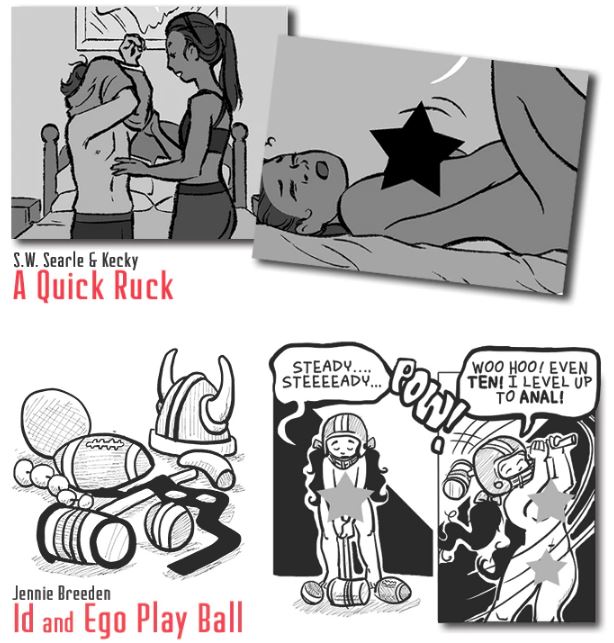 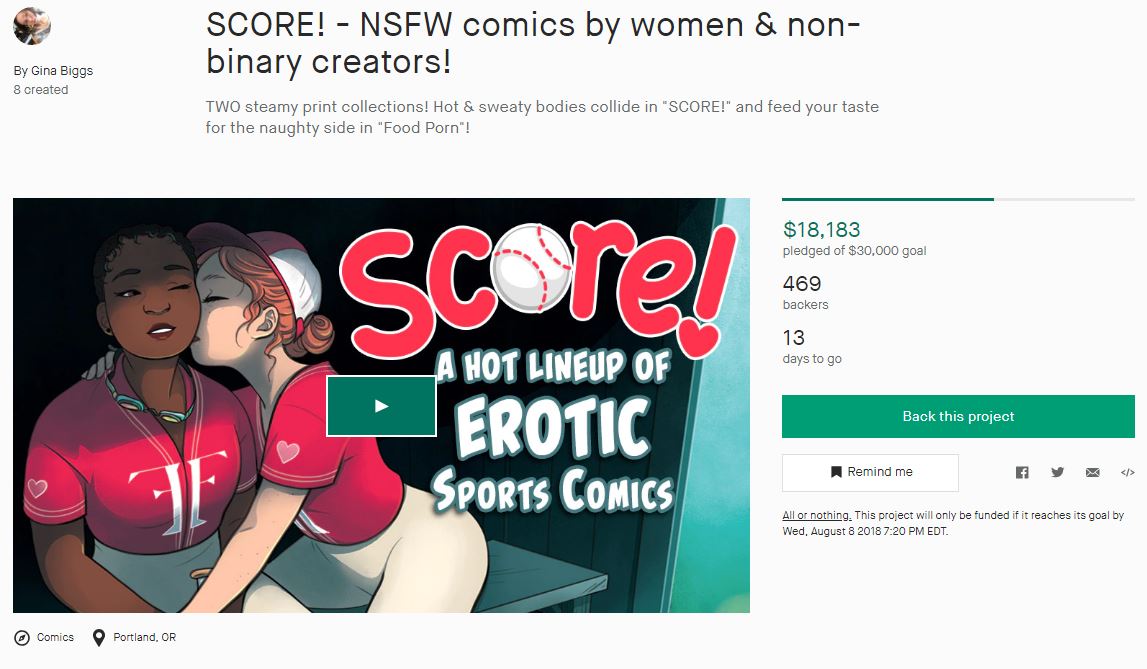 This next comic is called Agents of The Realm and it is by Mildred Louise @Froregade on twitter. Agents of the Realm is Magical Girl or 魔法少女 mahō shōjo inspired comic featuring a cast of LGBT characters. After reaching out to Mildred I found out that Agents of the Realm was inspired by some classics like Sailor Moon, Magic Knight Rayearth, along with some of her favorite shows like Disney’s Gargoyles and Parks & Recreation. I also detect some hints Revolutionary Girl Utena in the mix. It is certainly an interesting juxtaposition of likes and influences. But it has worked out well. 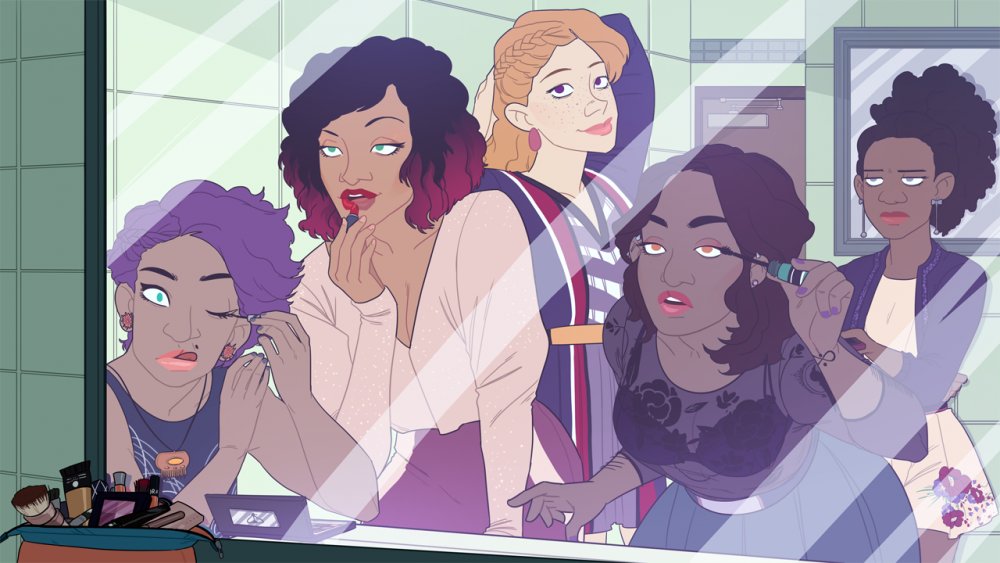 The art of Agents of The Realm is quite lovely and contemporary. The story telling is dynamic and will make you feel the full spectrum of human emotion. isitwednesday on tumblr actually wrote a wonderful review of the web comic you can read here. 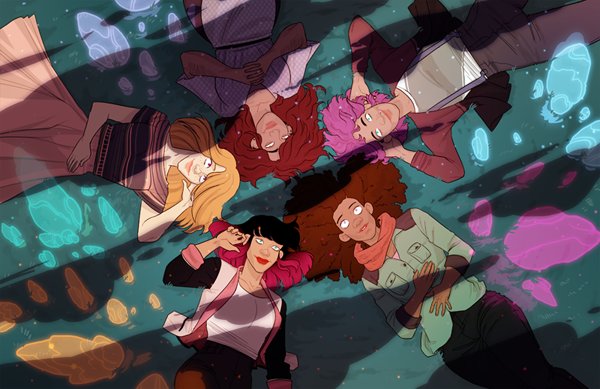 This wonderful story’s Magical Girls and Heroines are Norah, Adele, Kendall, Paige, and Jordan. Agents of The Realm follows them as they have to find ways to balance their college lives, and their duties as Agents.

While this campaign is for Volume Two, if you pledge $55.00 or more you can unlock the ELEMENTAL OVERDRIVE which gives you both volumes as PDF and Soft Covers. There are many, many more amazing perks to unlock. If you want to join our heroes on their great adventure, take hold of the keys to the realm today and back this campaign!

I hope you’ve enjoyed this Special #LGBT Edition of Indie Comics Showcase, as well as the previous installments. If you want to discover more Indie Comics please do check me out on Twitter  @indie_comics. Thanks and I hope to you’ll return next week, because I have something really cool planned out.