Jon Del Arroz & the Rise of the ComicsGate IndieGoGos

Jon Del Arroz is a bestselling author and has been dubbed “the leading Hispanic voice in science fiction” according to PJMedia.com. As a contributor to The Federalist, he is also recognized as a popular journalist and cultural commentator. Del Arroz made a name for himself writing science fiction, steampunk, and comic books. In fact, he recently won the 2018 CLFA Book Of The Year Award for his steampunk novel, For Steam and Country: Book One of the Adventures of Baron Von Monocle.

Jon is a willing and active participant in today’s culture war, almost by default since he is a loud and proud conservative author in today’s SJW-dominated sci-fi circles. Now he has produced his own comic book, illustrated by Jethro Morales (Green Hornet, Vampirella, Army of Darkness) and crowdfunded it on Indiegogo. That campaign was successful and is winding down over the next 24 hours. I hope you’ll check it out here and consider backing it too. In the meantime, you can check out Jon’s day to day activities on his blog at delarroz.com.

Here’s my interview with Jon.
BF: When and how did you start writing professionally?

JDA: I made my first short story sale in 2014 to a small press. The story was called “the Romance Chip” and I think they only ended up selling 50 or 100 of those anthology copies, but they paid me for it and it set me on the path. Those are going to be hard to find collectors’ items! 2017 was the first year I made “real money” on writing from my novels Rescue Run and For Steam And Country and qualified as a pro by the Science Fiction Writers of America standards.

BF: What made you decide to get into comics writing?

JDA: I think I was sitting at SDCC in 2008 or 2009 when J. Michael Straczynski was talking about following one’s dreams and the like, and I wanted to be like him. So right then and there I decided to start scripting comics! 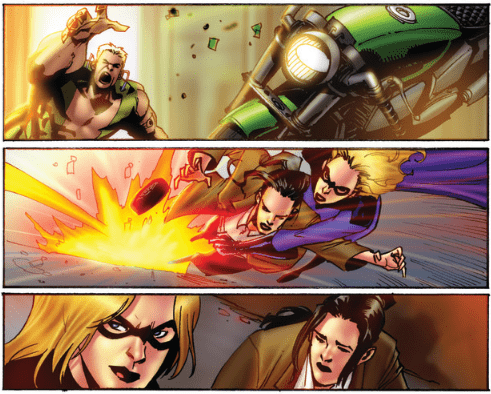 BF: Tell us about Flying Sparks. What’s the pitch and what sets it apart?

JDA: Flying Sparks is about a hero and villain who are in love. It’s like Mr. and Mrs. Smith meets the Superman family. It’s  all ages friendly and a lot more light-hearted than the movies.  Because I’m a novelist first, I try to write much deeper characterizations than you might see in most comics. The characters have different motivations which creates a lot of tension and drama on the relationship level that you’ll be hard pressed to find elsewhere. I wanted to create that feeling readers got from seeing Peter Parker and Mary Jane’s relationship drama in the 70s-90s, which made the super-battles all that more tense because there was more at stake than just the action.

BF: What are the next steps for the Flying Sparks comic?

JDA: I’m evaluating printers right now. The story is almost all lettered and done so I should be able to get it to a printer in the next couple of weeks. However long they take is however long they take. Volume 2’s art is complete, I’ll just need to edit the dialogue and do lettering on that and get going, maybe for an early next year Indiegogo campaign follow-up. 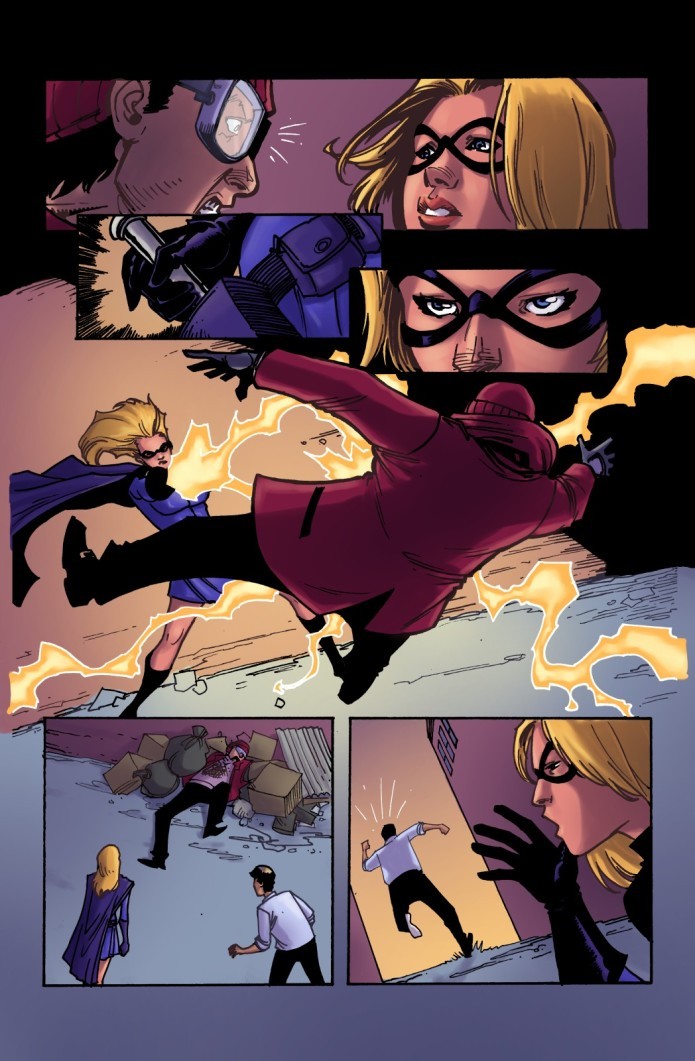 BF: How has the response been to the Indiegogo campaign?

JDA: It’s been amazing! I’ve never seen a first comic on a crowdfund go this well and make this kind of money and I’m so excited that it really means I can make a career out of being a comic writer.  I want to thank everyone who backed us! You’re the best. 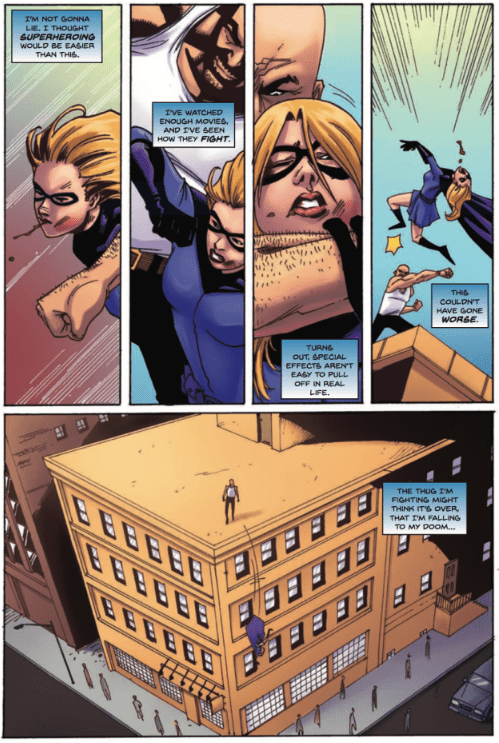 BF: Your campaign has clearly been a success, so after fulfillment of Flying Sparks, what’s your next project? Can you tell us about it?

JDA: I release novels fairly regularly, most famously my Adventures of Baron Von Monocle series. Book 2 just came out a week ago and achieved a #1 New Release on Amazon. Book 3 will complete the trilogy sometime in late September.  On the comic front, Jethro Morales (the artist on Flying Sparks) and I will be doing an IndieGoGo for our Arkhaven Comics graphic novel, The Ember War, which is a military science fiction series by Richard Fox.  We’ve adapted the first novel into comics and that’ll launch September 17th.

BF: You’re very outspoken on social media about your conservative values and your faith. Have you always been this outspoken about them?

JDA: Yes! I’ve always been very politically active and also very active within my church. When I was first coming up in writing, around like 2014-2016, I kept getting warnings to silence myself over my views or I could wind up being blacklisted – and those warnings turned out to be very correct. As the 2016 U.S. elections approached, I became even more vocal. Suddenly, several of my contacts that I had made within the comic and book publishing industries publicly disavowed me and actually went out and started saying horrific things about me based on how I voted and would mock my Christianity.  But I believe that it’s worth it not to censor yourself. There’s a big community out there that provides a great support network. For folks just starting out, who are more conservative like myself, I would recommend joining the Conservative Libertarian Fiction Alliance on Facebook. They’re super friendly and have given me a lot of support throughout all of this.

BF: You’ve aren’t afraid to push-back against the SJWs that seem to attack you constantly on social media. Do you see any solution to this division in geek fandom?

JDA: No I don’t. I actually feel as thought we may be headed toward a country break-up and I don’t see anything that can be done about it. The mainstream media only makes things worse and they’re not going to stop. They’re not interested in stopping. SJWs care more about their fanatical politics than they do creating products and have actively sabotaged products to force their angry divisive politics to be accepted. We (on the right) have to create our own culture and platforms and do our own thing. There’s no appeasing them and there’s no bringing back the companies they’ve destroyed. They are already too ingrained and the damage is done at those companies. Fortunately, with the rise of these ComicsGate IndieGoGos, we have a new great business model!

BF: Thanks Jon! Congrats on your success. We look forward to your next project and hope the campaign for Flying Sparks finished strong!

Check out Jon’s Indiogogo today before it finishes in 24 hours! Click here to check it out 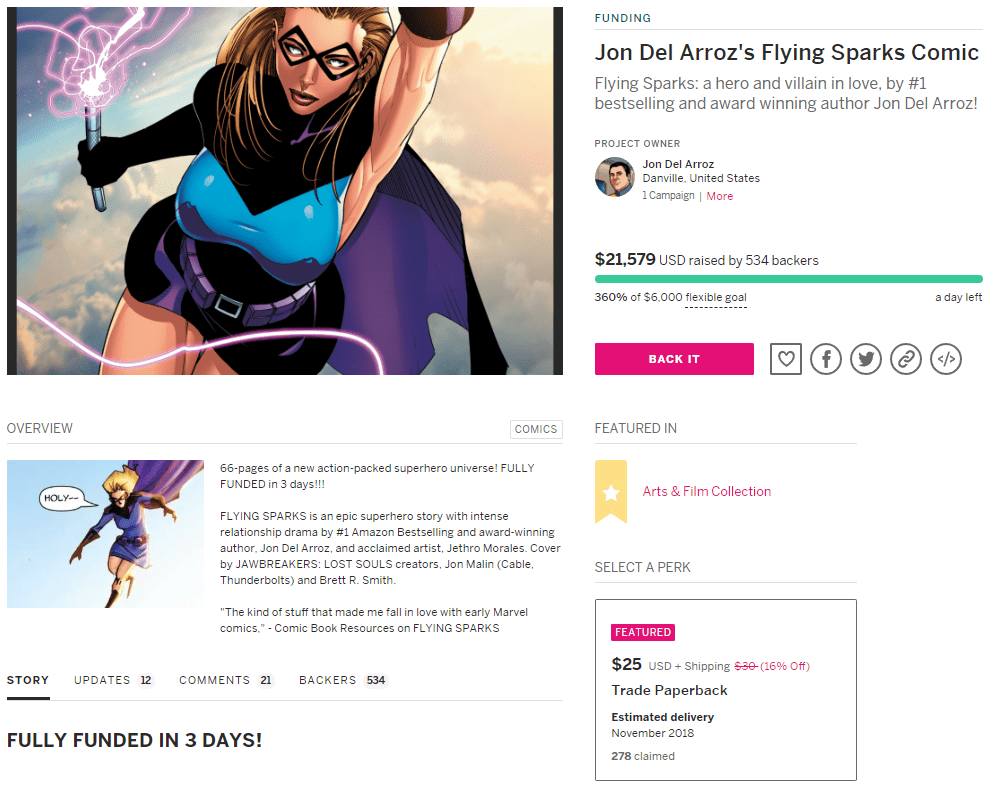