Hello and welcome back to another installment of Indie Comics Showcase. This week we approach with fear and trembling several horror titles from indie creators who are using crowdfunding to get their projects made.  This special double-sized issue has been brewing for a few weeks now, as I’ve kept adding more and more to it as more horror-themed projects have been unearthed.

There’s no turning back now…. 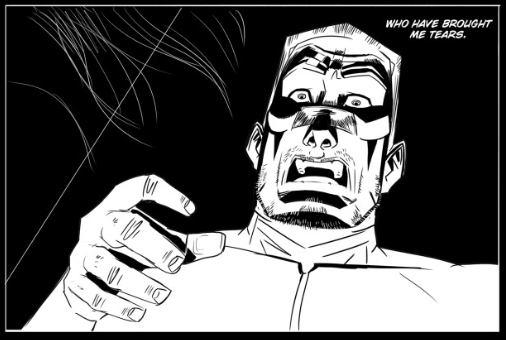 The Hexing is a new supernatural horror comic series by artists Michael McGarvey and Élan Heredia. Set in Ewa Beach, Hawaii, The Hexing moves away from the beaches of Waikiki and explores a paranormal side of island life. The Hexing follows Samantha, a young teenage wallflower who discovers a dark and powerful form of Filipino folk magic called Kulam. Harnessing its dark power, Samantha takes revenge on those who have wronged her and uses it to change her life for the better. But the more Samantha uses the Kulam, the more things seem to go bump in the night. The Hexing has really stylized yet minimalist art and it is just awesome. 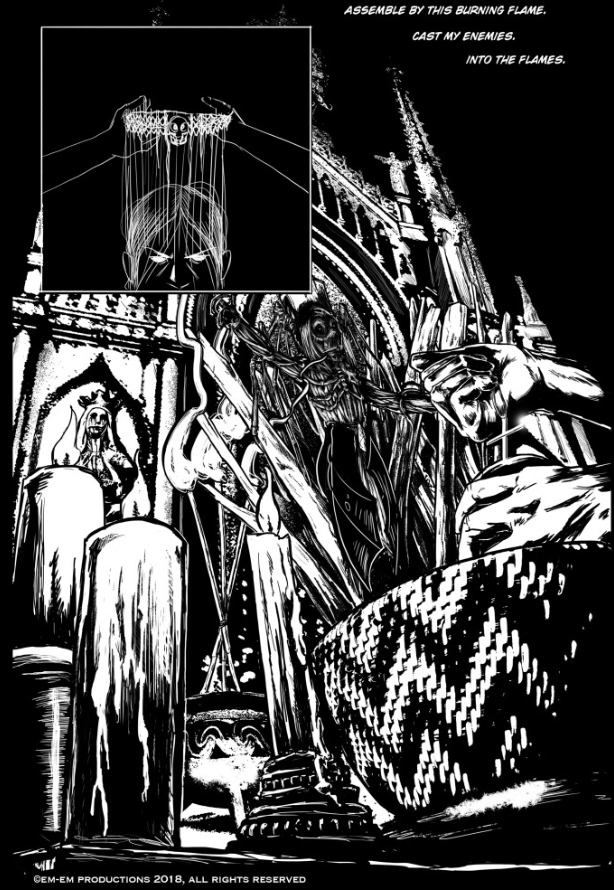 Get involved and help back Hawaii’s own supernatural horror comic. You can also follow this project on Twitter at @TheHexingComic. The Rainbow state is about to get dark! Time is running out! 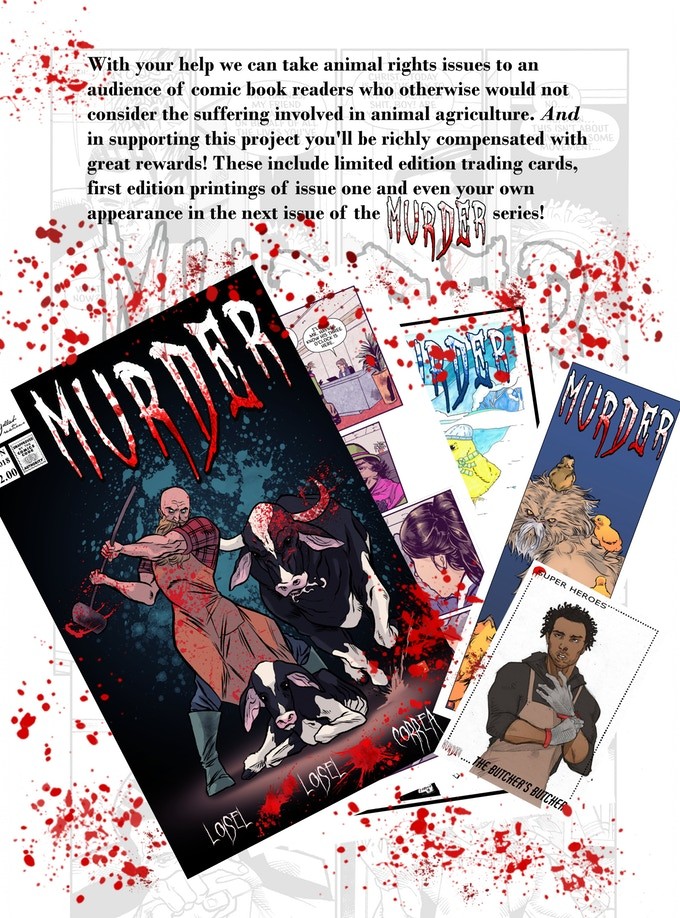 Murder by Matthew Loisel tells the story of domesticated animals, one species at a time, linking telepathically. One man, The Butcher’s Butcher, is mysteriously the only human who can also hear them. They are conspiring to put an end to mankind, and he is the only one who can stop them. Murder will take you through hatcheries, dairies, rodeos and food trade conventions, so that you can see what it takes to get some of the food you eat to your table. 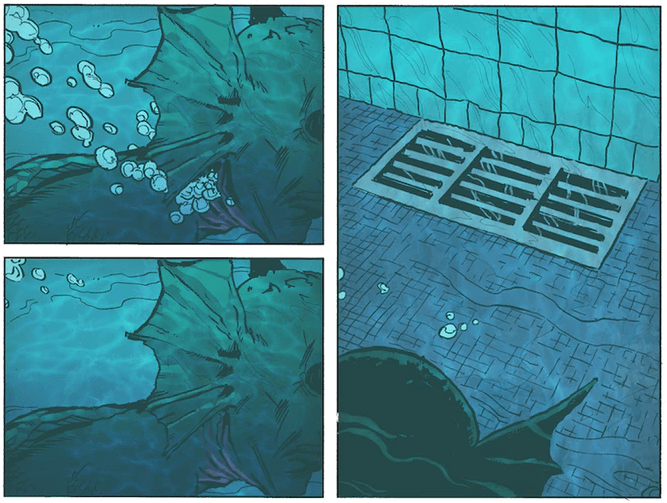 CREECH as described by its creator, Fred Kinslow, is a slice of life character study about a teenage monster living in the American Northwest during the 1980’s. 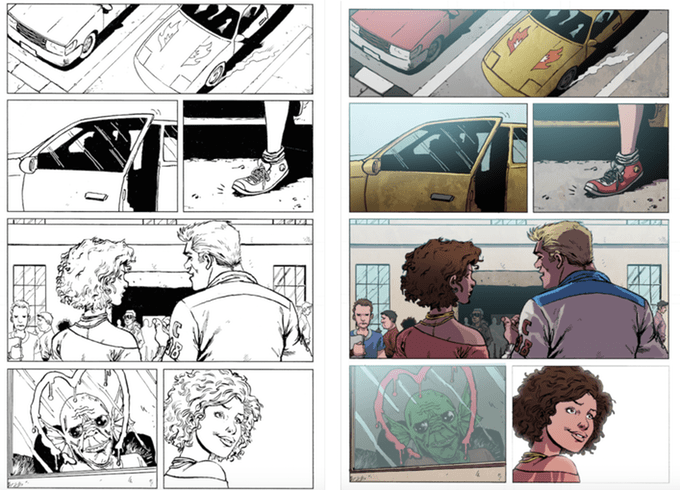 CREECH is about  a teenager attempting to rebuild his life after his home is poisoned … but everyday life isn’t easy when you’re a refugee from a mystical realm. The way I would describe CREECH is Michael J. Fox’s Teen Wolfe, meets The Creature From The Black Lagoon, with a splash of The Twilight Saga thrown in. More specifically I am reminded of Midnight Sun, which is the unreleased version of the first book as told from Edward’s perspective. The art is by illustrated by Antonio Brandao, with colors are by Pungky Stiawan. I really like the familiar yet unique take on an older property like Creature From The Black Lagoon. It’s executed exceedingly well by this incredible team which also includes letterer Lucas Gattoni. If you would like to take a swim with Creech, or join him as he attends his High School Classes, please check out the campaign. 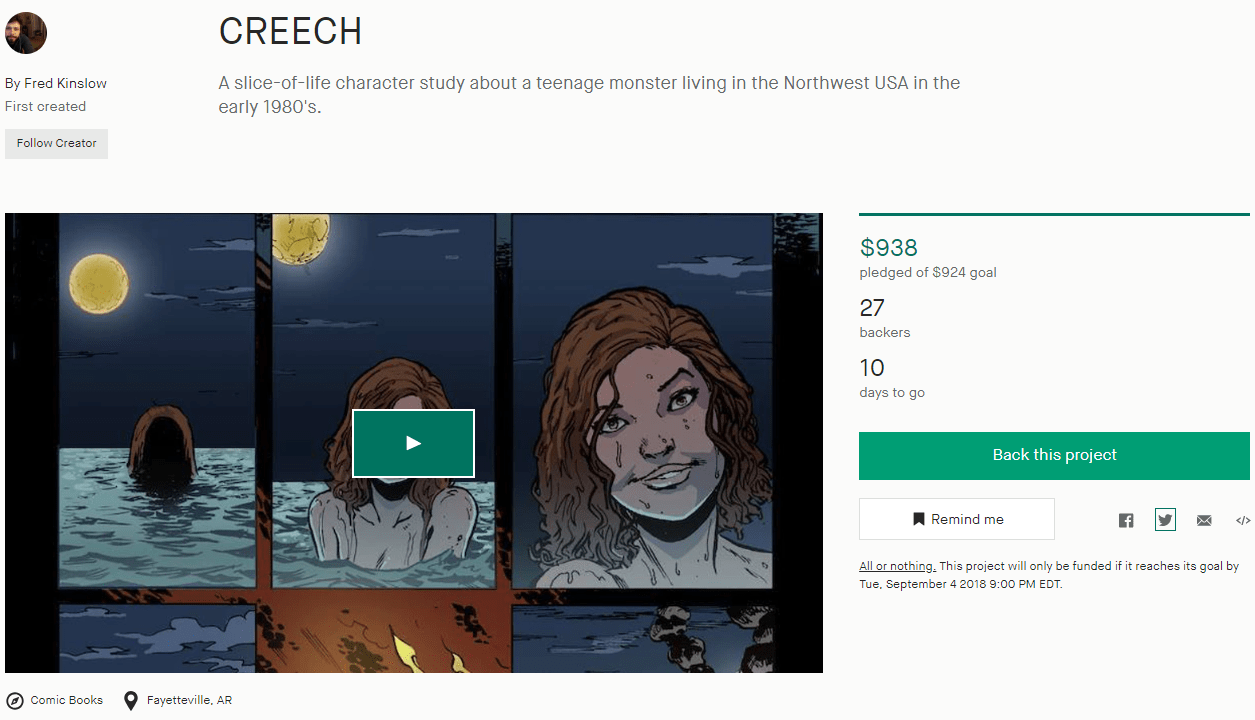 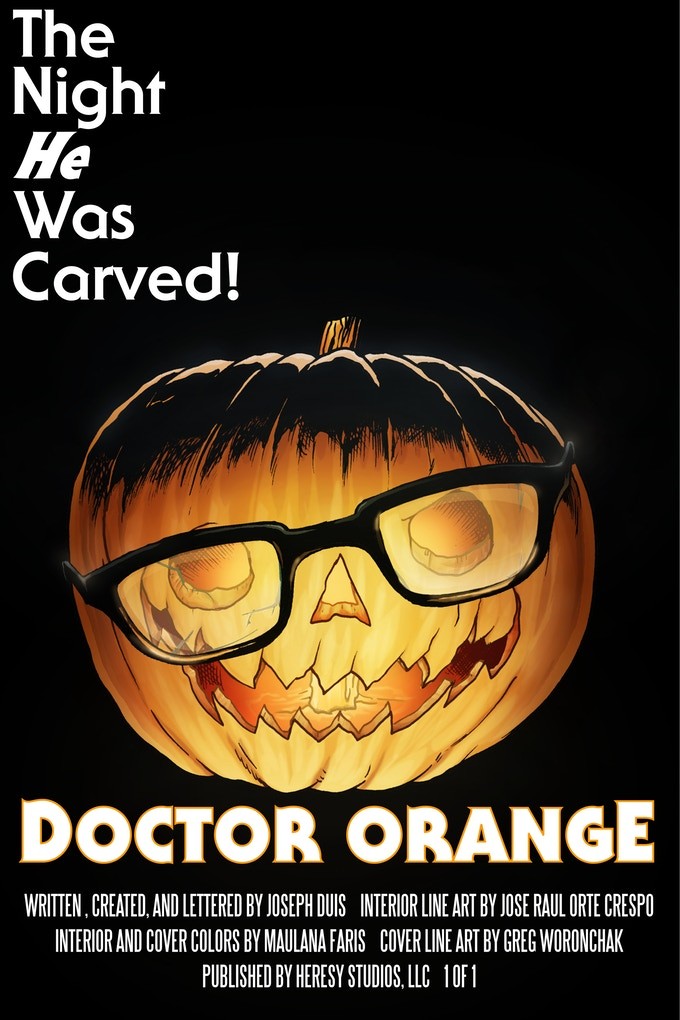 Dr. Orange is a Halloween themed “Physiological Thriller”. It follows a woman named Suhaila. She has a history of mental health issues and has to take medication to keep her from hallucinating. One day as she is getting ready to celebrate Halloween, she starts carving a Pumpkin. She carves a little face with sad eyes and a smile. She even puts glasses on it and calls it Dr. Orange. At this point the Pumpkin starts to take on a life of its own, and the story really begins.  Much of what happens in the story reminds me of the film adaptation of American Psycho. It’s a story that leads the reader to question how much of the story is actually happening, and how much of it is a just a manifestation of the main characters mental state. Those questions can only be answered by reading the book, which you can do so by backing it on kick starter today. 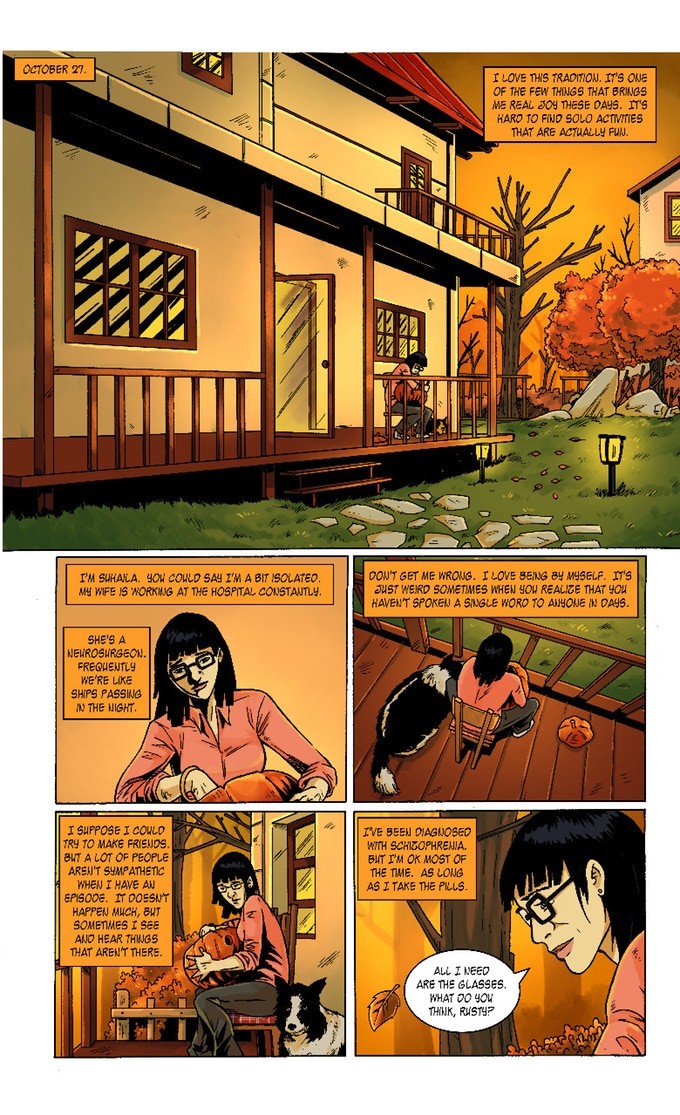 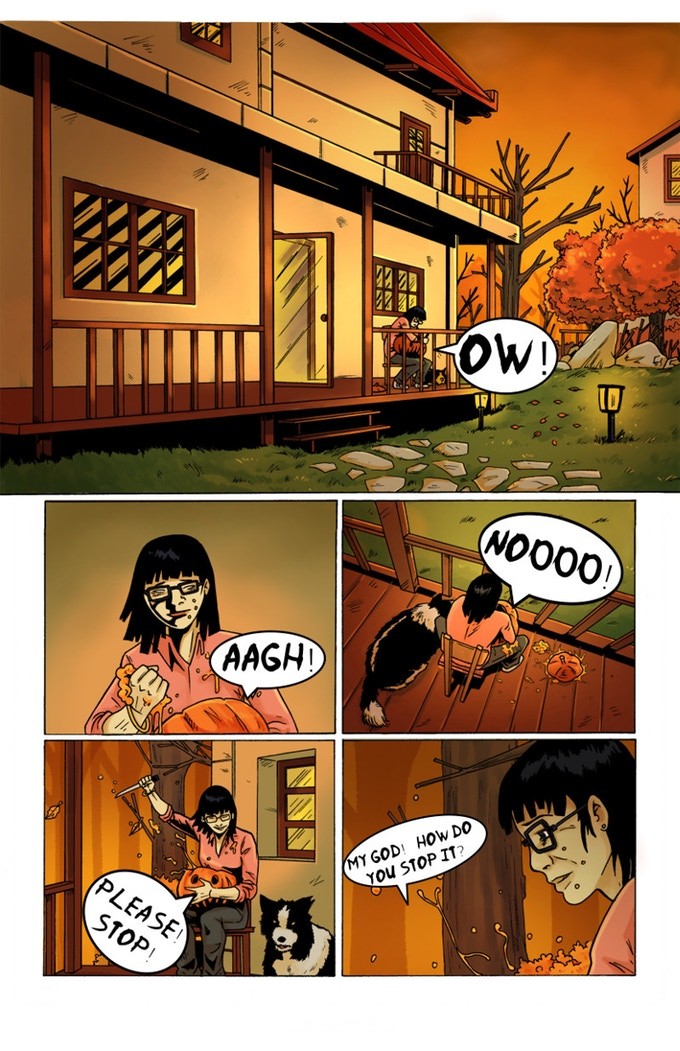 The campaign has been fully funded and there are still a few days to go. As a bonus, all of the current stretch goals have been unlocked and everyone who backs Dr. Orange will receive some bonus Indie Comics. The prices and rewards vary according to each of the pledge levels.

You can read a free preview of Dr. Orange right here.

And back the campaign here.

Bone Structure by Bailey O’Neil is another story that tackles the issue of mental health in a very unique and interesting way. It’s the story of a young girl who one day is visited by a monster, one that refuses to leave her alone. So she then has to compromise and to learn to live with it. 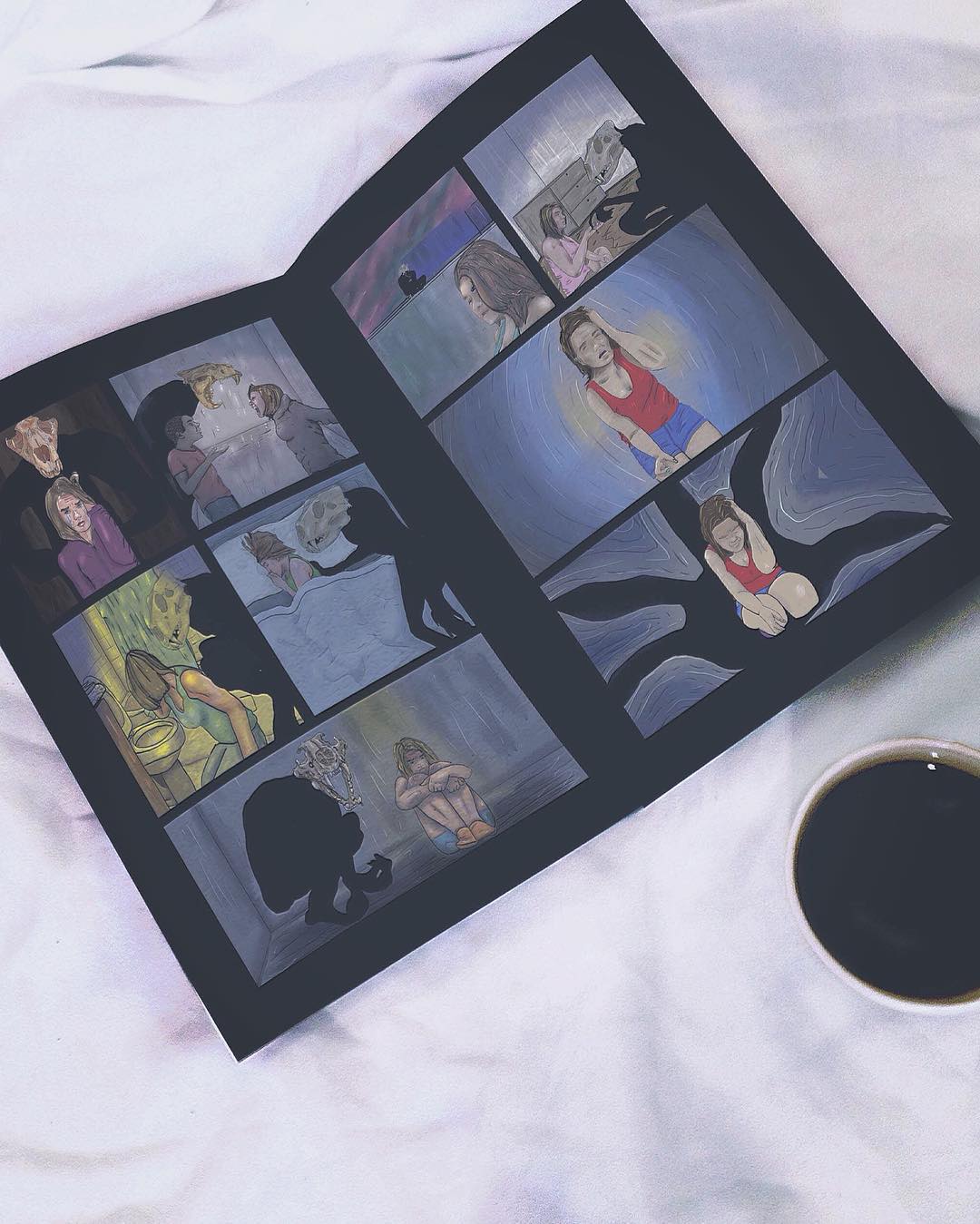 Bone Structure as described to me by Bailey, is a shorter book with some twists, so it’s hard to not give too much of it  away. In the hopes of giving people a bit of perspective as to what she and others like her have had to go through. Bailey used her own experiences, as well as the experiences of others while working on this project. She also hopes that anyone who might be going through a similar situation to hers, can read her story, relate to it and know that they are not the only ones. This is something that I think is very important which is why I have chosen to include Bone Structure in this installment. 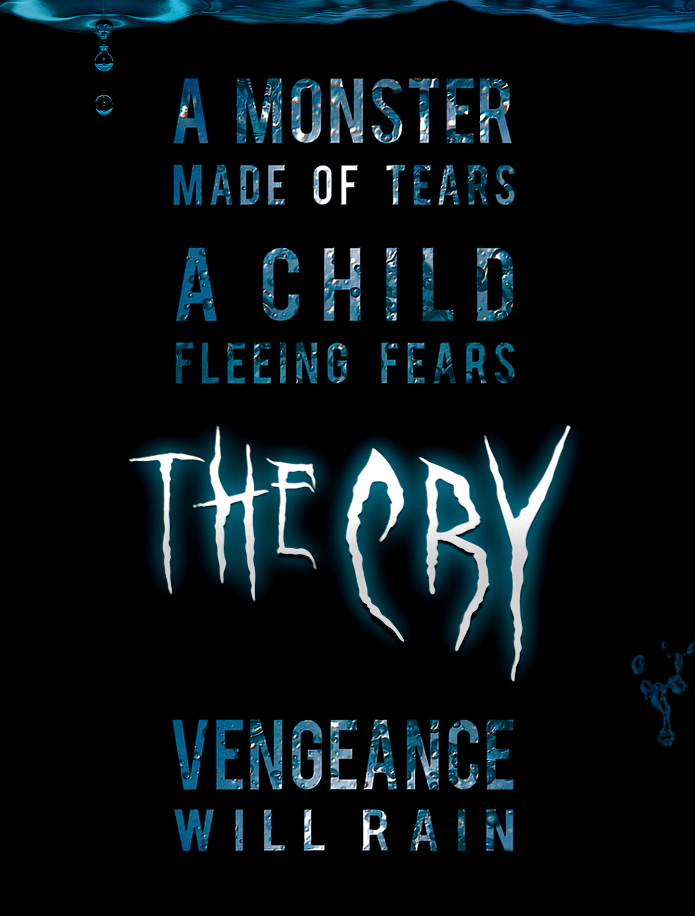 While Yuma Arizona is a real place, the characters and events are fictional, the statistics, particularly the ones mentioned in this article are embellishments, and the locations may not correlate with their real world counterparts. 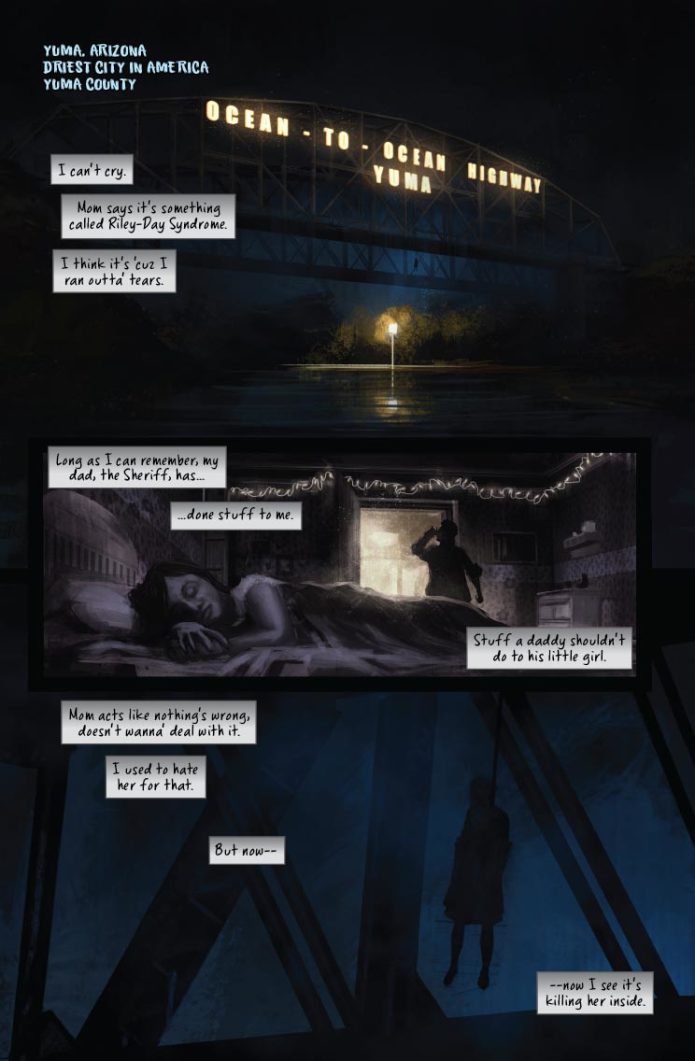 The Cry takes place in Yuma Arizona, the driest city in America. There are few more things Yuma is also known for. One of them is its ever growing suicide rate, people have been either hanging themselves from the Yuma Bridge, or jumping off of it for years. The other thing Yuma is known for is the cities alarming number of child abductions. In Yuma, there is a little house, where a seemingly perfectly happy little family lives. This is Lara’s house, as we will learn in this story, her life is far from perfect and farther so from being happy. Lara’s father is the Sheriff of Yuma, he’s also the city’s biggest piece of shit. He has been taking advantage of Lara from a very young age. Lara’s mother knew about what he was doing and did nothing. That is until she could no longer live with the shame of what she allowed Lara’s father to do to her, and hung herself from The Yuma Bridge. 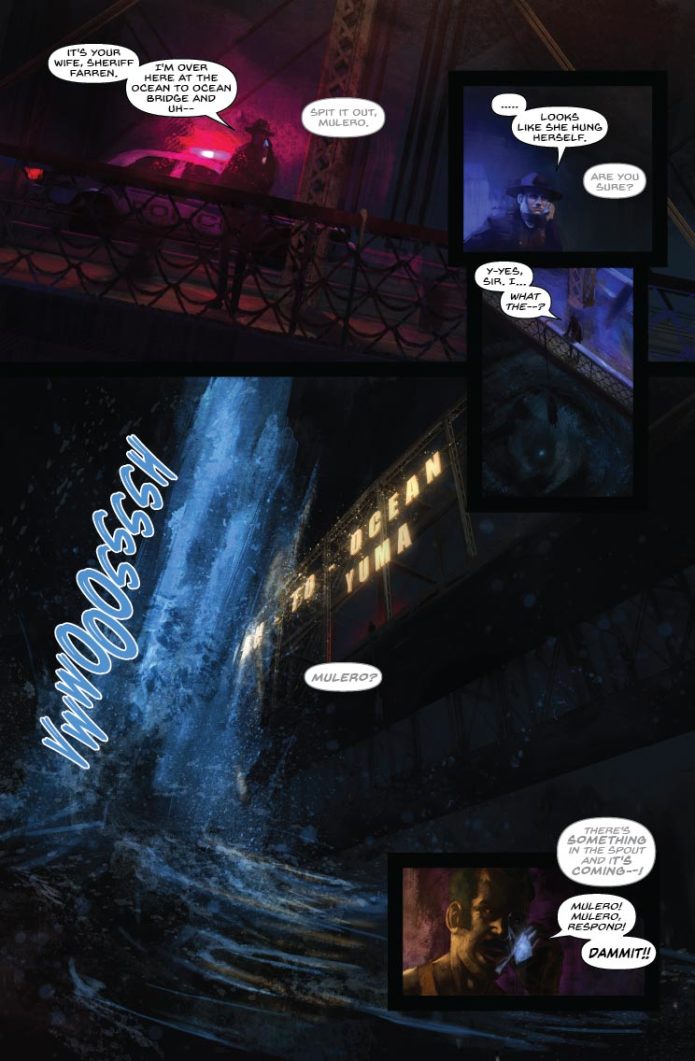 Before she killed herself, Lara’s mother told her the tale of a monster who would arise from the fallen tears of children in need, and help them. For a long time now, Lara had been unable to cry. Will her father’s actions drive her to do so, a monster ever come to her rescue? To find the answer to that question you will have to read the book. And the only way to do so is by backing it on Indiegogo.

The Cry is written by J.S. Earls, with art by illustrator Pablo Ayala. It is a beautiful comic dealing with the tragedy of child abuse. I hope you’ll consider backing it.

So a few weeks ago I hosted a poll on Twitter asking followers to select between a Dapper Vampire and a Sexy Succubus. Some readers may not know that I like to dabble in comic art myself occasionally, and since “The Sexy Succubus” won that poll and I created the following image in Daz3d‘s Daz Studio. I hope you like it. 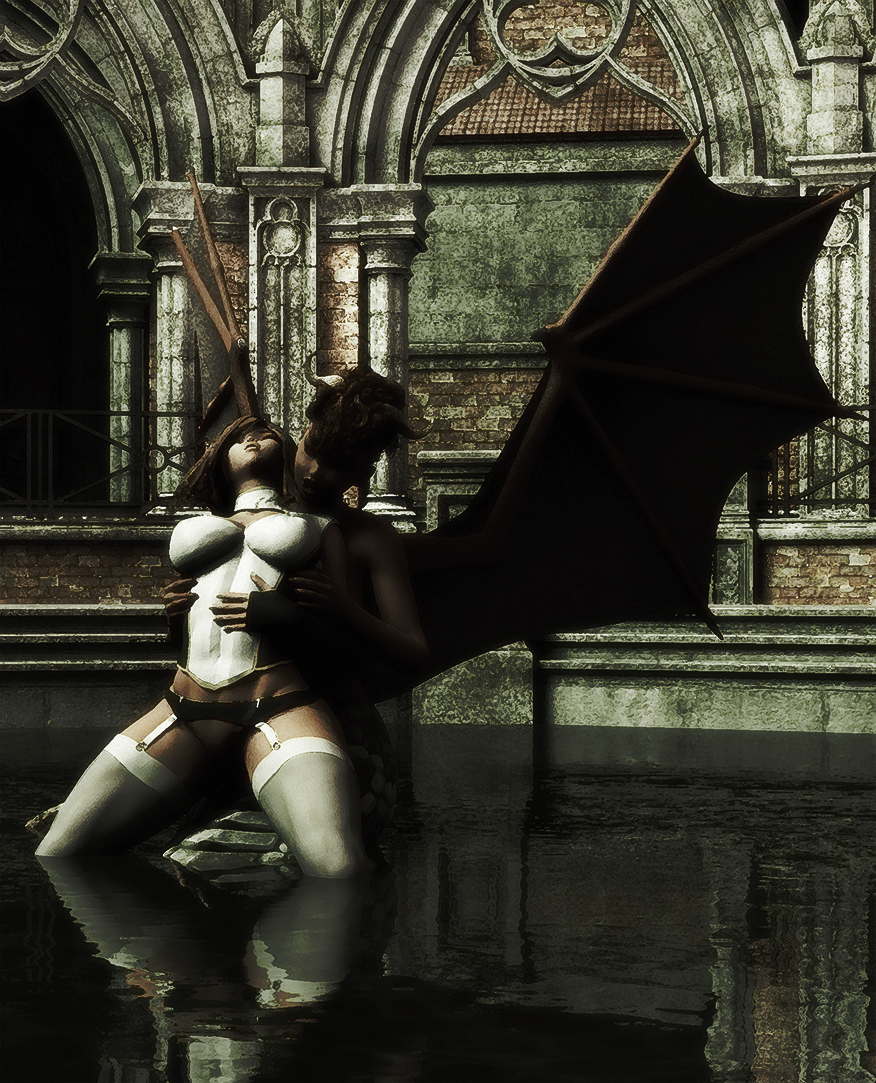 Now keeping with this week’s horror theme, I wanted to mention two more projects that are coming soon! One is launching in about 5 days and the other is launching in September.

The first one is Something Real follows a boy named Philip Hasten who one day discovers his family has been battling a Boogeyman for centuries. This Boogeyman kidnaps imaginative children and uses their enhanced imaginations to construct his very own dream realm. His Hellish nightmare-scape is close to completion and the only one who stands in his way is Philip to help the Hasten family conquer their fears and save the world. 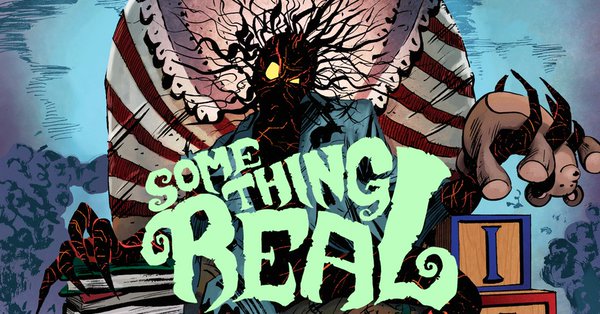 Something Real has really unique art and puts an interesting spin on a tale we are all familiar with. The Tale of The Boogeyman has been around for centuries and several different cultures have a similar entity in their Folklore. The Slavic and Russians have The Baba Yaga which is an old witch that typically lives in the Woods. Do you know of The Baba Yaga? There have been many interpretations of The Boogeyman in modern media. In an episode of Buffy The Vampire Slayer titled ‘Killed By Death’ we got ‘The Gentlemen’. They were incredibly creepy yet extremely dapper. These I believe were based on a combination of the Bokkenrijders from The Netherlands, and serial killer Albert Fish. Howard Hamilton alias Albert Fish was also known as the ‘Werewolf of Wysteria’. He would kidnap women, often mothers, and young boys, and then do some rather unmentionable things to them. The version presented in Something Real is closer to the English version, where it looks more like a shadowy figure. 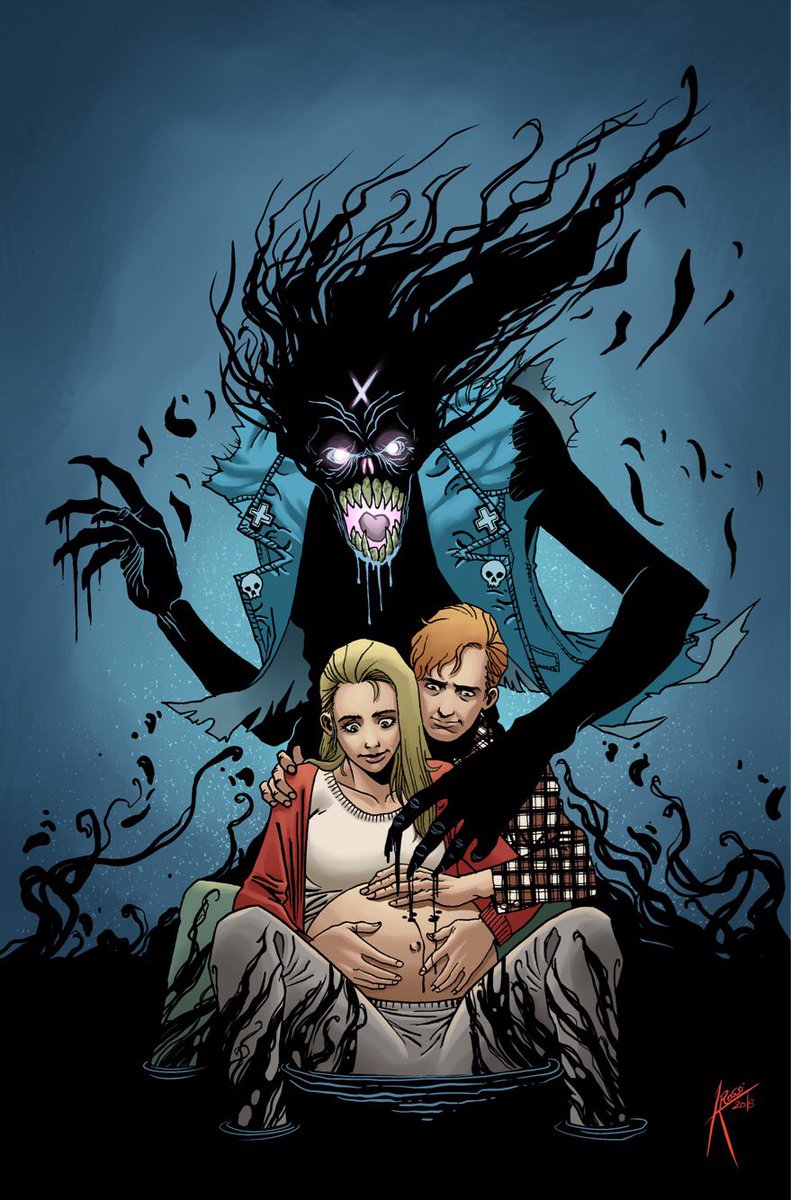 Something Real was written by Joey Turnage with illustrations and colors by Ian Miller, and Fredik Mattsson.  This project launches on this week on Indigogoso follow its creators or the @Indie_Comics Twitter handle. 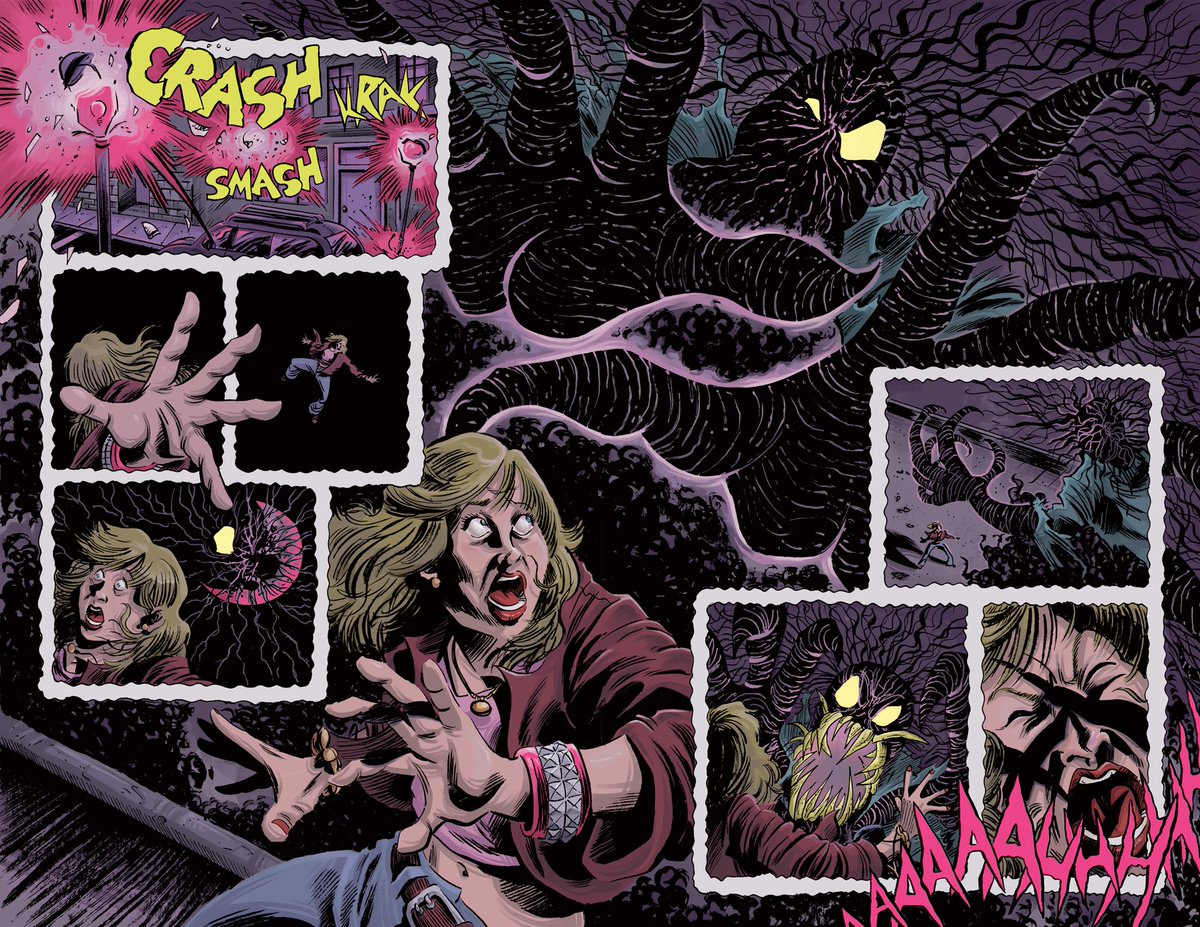 Mississippi Zombie by Bradley Golden is currently being worked on and will be an ongoing anthology series. The story will be told in four, twelve page issues. Each issue will either be in full color or black and white. Each of the stories is different, they will tackle different themes, but all take place within Mississippi. The stories will be about a zombie outbreak happening in different parts of Mississippi. The locations will vary from big cities, small towns to the swamps of Mississippi. The writers have to use the names of real towns, cities and different placed to tell the tale. You may see some familiar locales, you may also visit some new ones. While each of the stories are different, they will culminate at the end. The southern states really have not had a zombie comic book, so Bradley saw an opportunity to fill that gap and is doing so magnificently. 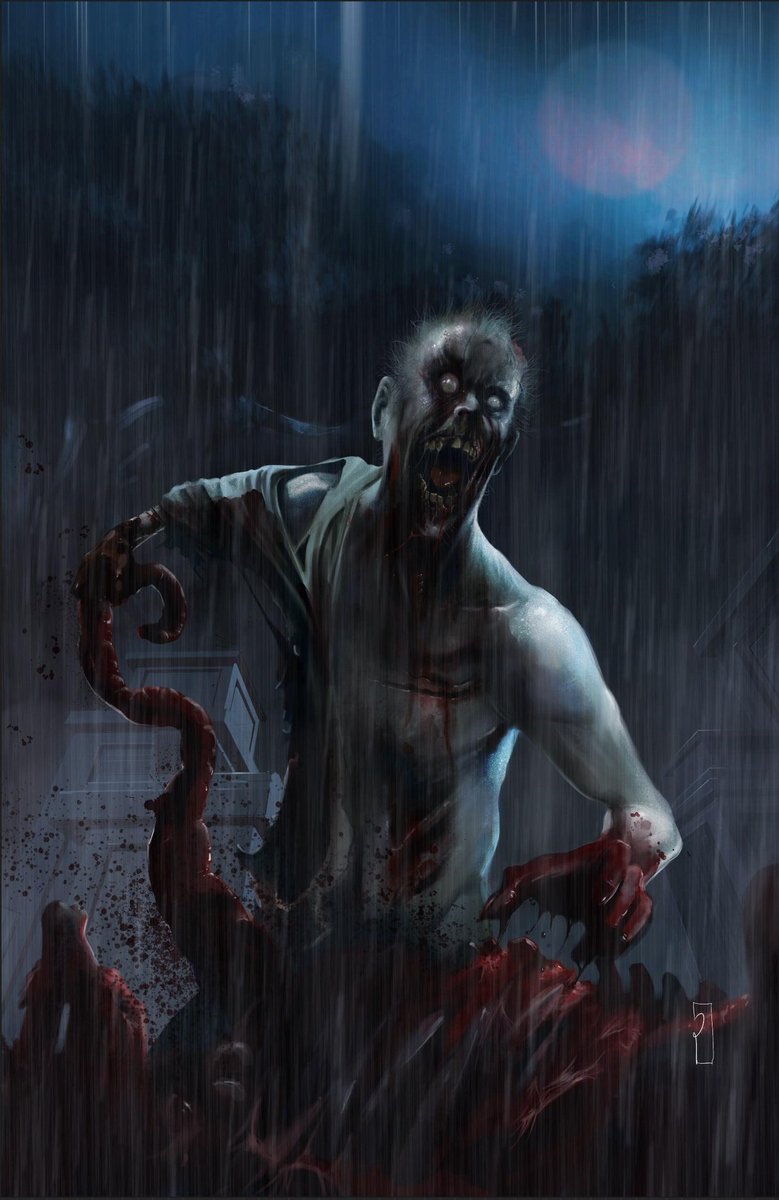 This Indiegogo campaign is slated for the middle of September. If you want to keep track of it and see some of the behind the scenes progress of the Mississippi Zombie, you can follow Bradley Golden on Twitter @BRADLEYGOLDEN4 and Facebook as well. And of course, I will be promoting it on the @Indie_Comics Twitter feed as well.