by John Lemus
|
Welcome back to another installment of Indie Comics Showcase. This week I would like to present you three very special comics. The demand for coverage of these three projects has been exceptionally high, with good reason. I would be seriously remiss if I did not cover them here.

But before we get started I would like to congratulate these amazing creators on their successful campaigns. Bradley Golden (on Twitter @BRADLEYGOLDEN4), the creator of Timmy Lala’s Ice Cream. 78 backers pledged $2,733 to help bring his project to life. This is one of the projects I covered in lasts week’s Indie Comics Showcase. 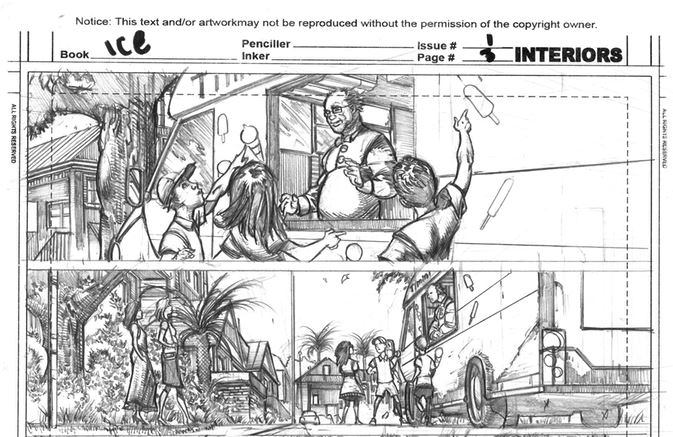 Another successful campaign I want to mention is Lucky Moons and the @RealDragonFrog Team, the creators of Dragon Frog, their first project has earned $4,821 successfully meeting their campaign goal. There are still 9 hours left on the campaign as the publishing of this article. Please check it out, there might be time for you to still contribute this incredible project. If not please follow them on Kickstarter and Twitter. 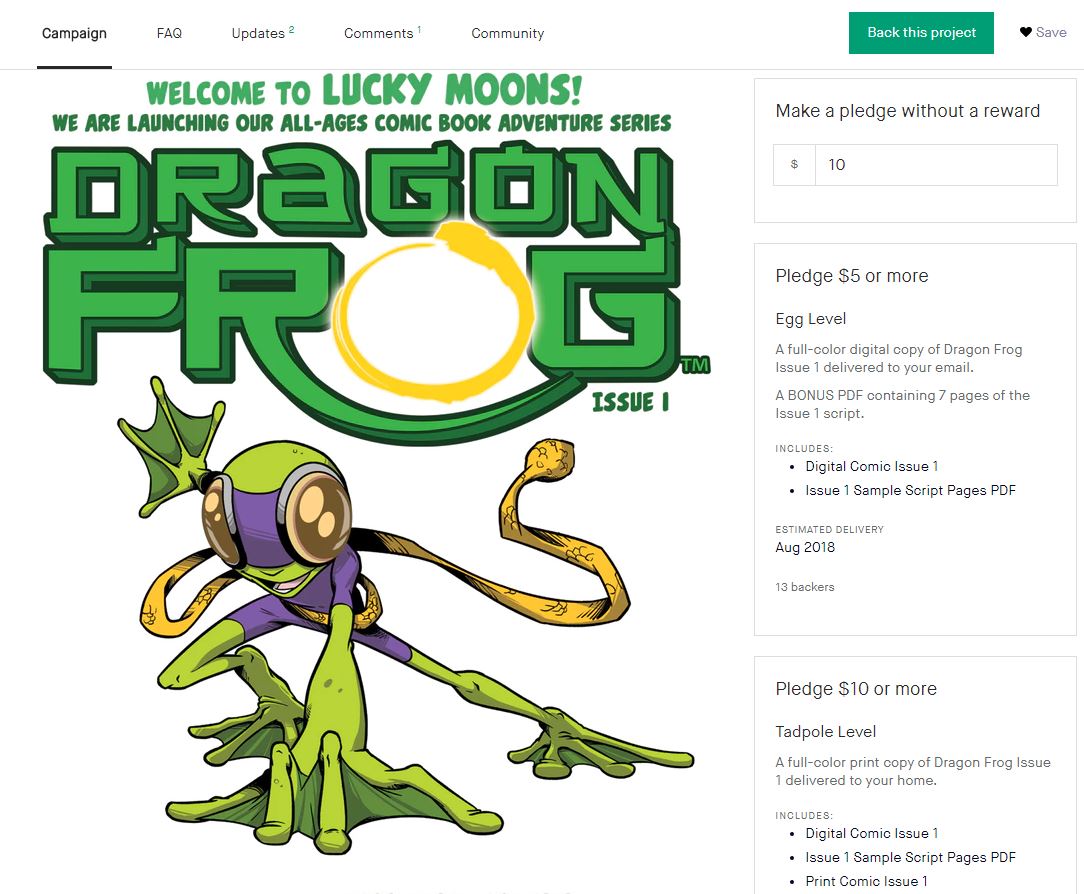 Lucky Moons is run by Sergio Lazaro in Ithaca, NY. Sergio has always enjoyed writing poetry and children’s literature. While serving in 6th grade detention, the prospects of freedom and adventure consumed his thoughts. It was there that the idea of a high-flying crime-fighting frog lit his imagination. For the last 10 years, Sergio and his editor Nanci have been working to bring Dragon Frog to life. They are incredibly grateful to have a talent like Brett Brooks illustrating the story. They have established Lucky Moons to present the Dragon Frog comic book series. Dragon Frog is the story of a young Cyd Pollywog who overcomes his disabilities to become a superhero in the kid-friendly comic book series DRAGON FROG! There is still time to back this project, so check it out here.

Also, big congrats to Cody Fernandez, Matias Laborde , Vince Rush, Maxi Dallo, Jack Irons: The Steel Cowboy Himself, and Wikid Publishing as of the writing of this article. Their project Jack Irons: The Steel Cowboy #2 has earned $7,090 USD total. I believe you have until July 20th if you want to contribute to the project. You can check it out here. 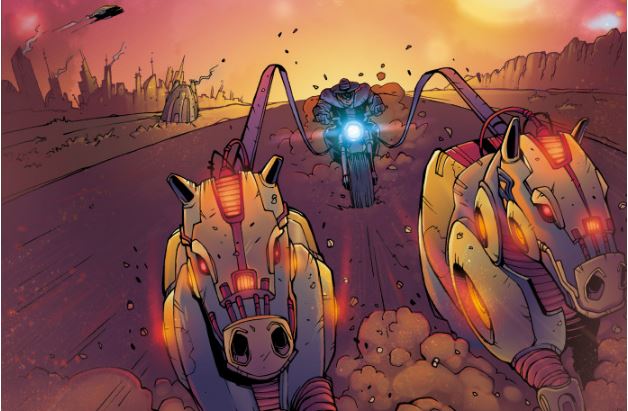 Cautionary Comics, and the incredible team behind RAVAGE: KILL ALL MEN which as of the writing of this article has earned $37,580. I do believe there is still time to contribute to this campaign as well. 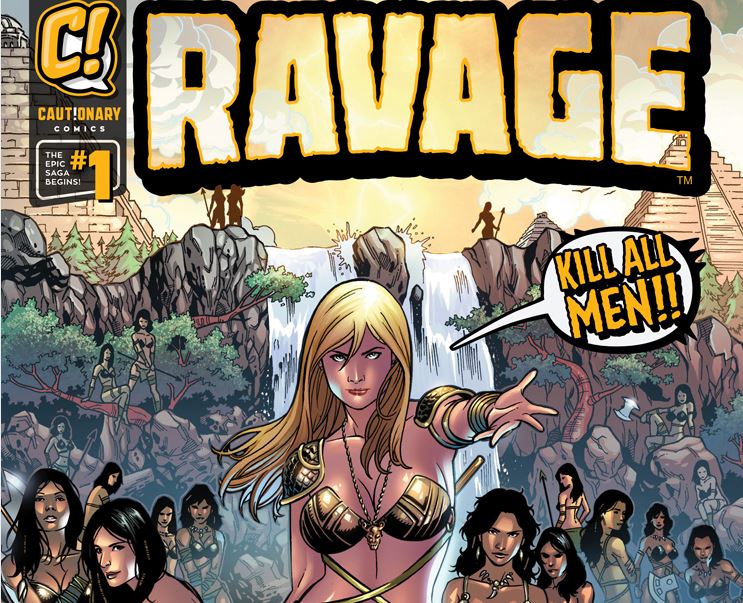 Once again: Creators, Projects, and the Fans who support them, are why I #SupportIndieComics, and why you should too!

Now On To The Show!

The first comic I would like to showcase today is Detective Dead, by Antonio Malpica.

Detective Dead is the story of Joel Anthony Scorn, a detective from the 1930’s. After returning home from the roughest raid of his career, he finds the dead bodies of his wife and daughter. Moments after making the discovery, he too is killed. Due to unforeseen circumstances he finds himself in present day. Only he is not the man he once was. He has special abilities, and with them he must search for answers. Join our hero on the case of a lifetime, follow the clues, and see what secrets they unlock. 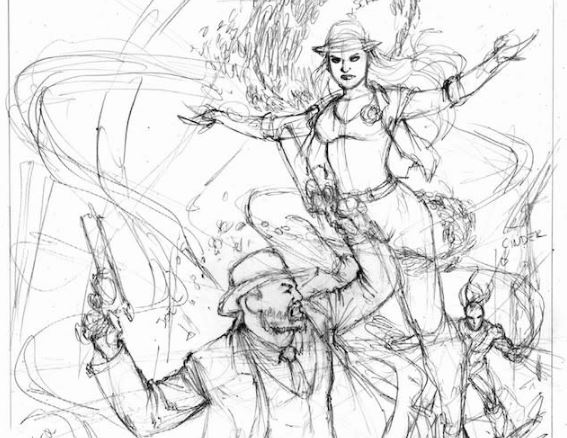 Detective Dead pays homage to Classic Film Noir, while giving the story a modern Sci-Fi Twist. From what have been able to read, the story is reminiscent of the video game Murdered: Soul Suspect, with elements of, Robert Heinlein’s All You Zombies, or rather Predestination, the 2014 film adaptation of All You Zombies. There is rough art for the series (seen above), which I actually would not mind if it were the final art. It looks wonderful and I think fits the narrative and style of the story.

Check it out for yourself here! 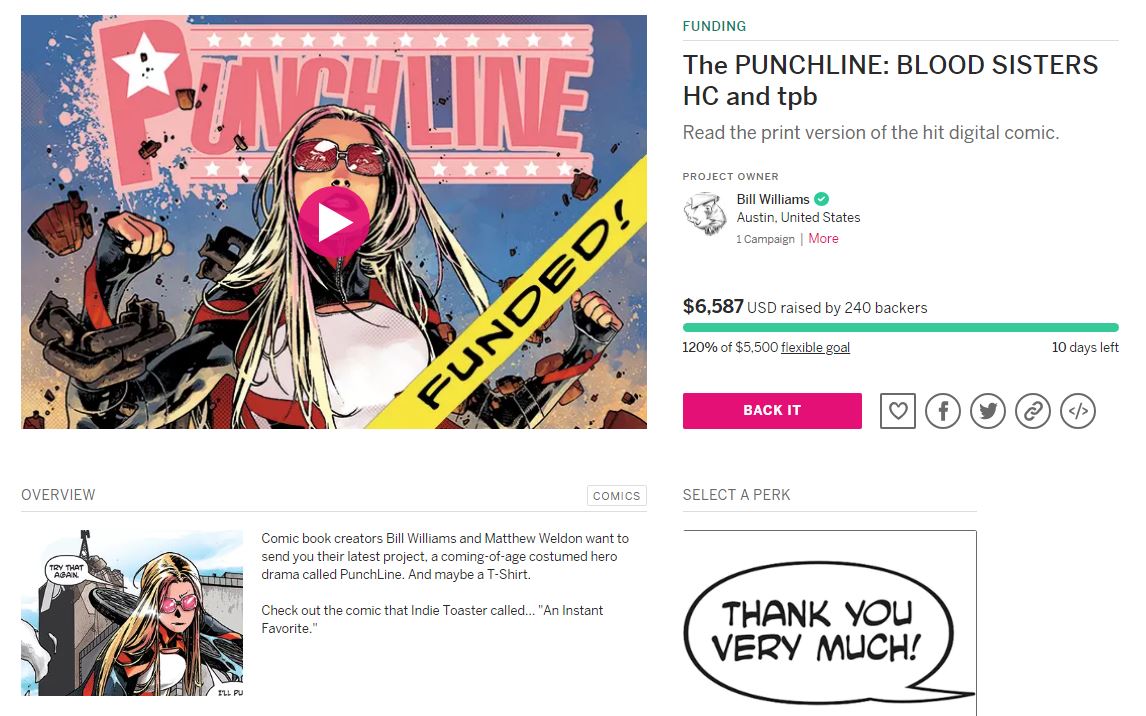 The Punchline: Blood Sisters is a more traditional passing of the torch, coming of age, super hero story. The creators describe it as “Jessica Jones Training Buffy The Vampire Slayer”. The concept and story are solid, the artwork is strong. So it comes as no surprise to me that this project has been fully funded. There is still some time to contribute and there are still plenty or perks to pick up. Check it out here. 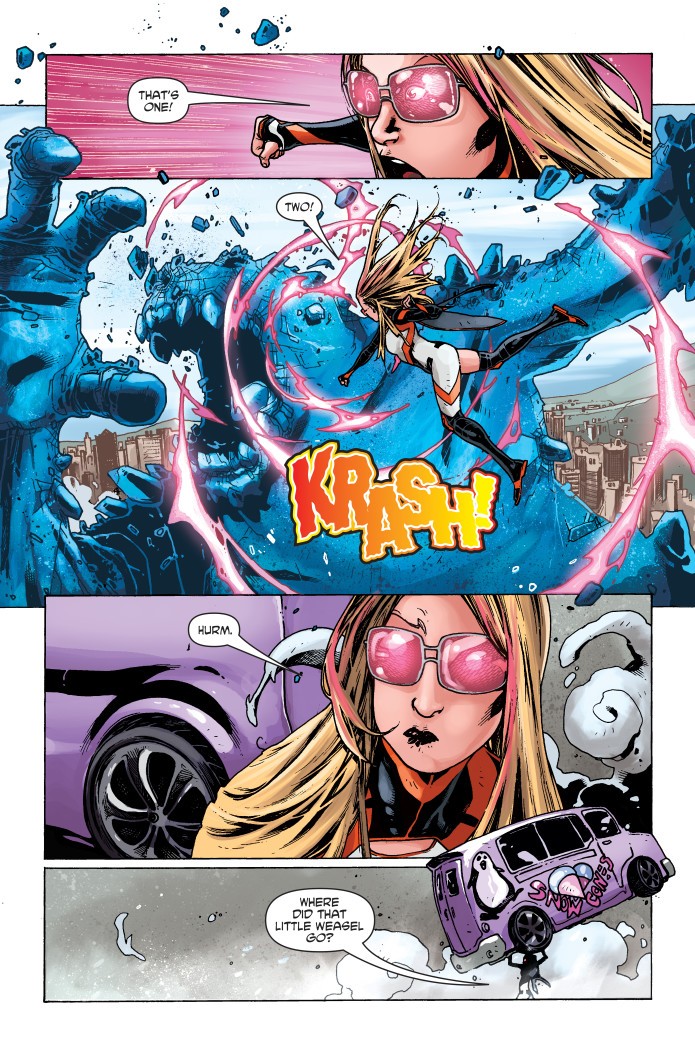 This next Comic has caused my Twitter Feed and DM’s to blow up from people, either talking about it, or wanting me to cover it. But before I even mention the name of the project, we have to set the proper mood. Grab the nearest American Flag and drape it around your shoulders. Now, open up Youtube and look for your favorite rendition of Hulk Hogan’s Real American and crank it to the max. Because oh brother, have I got a comic for you! 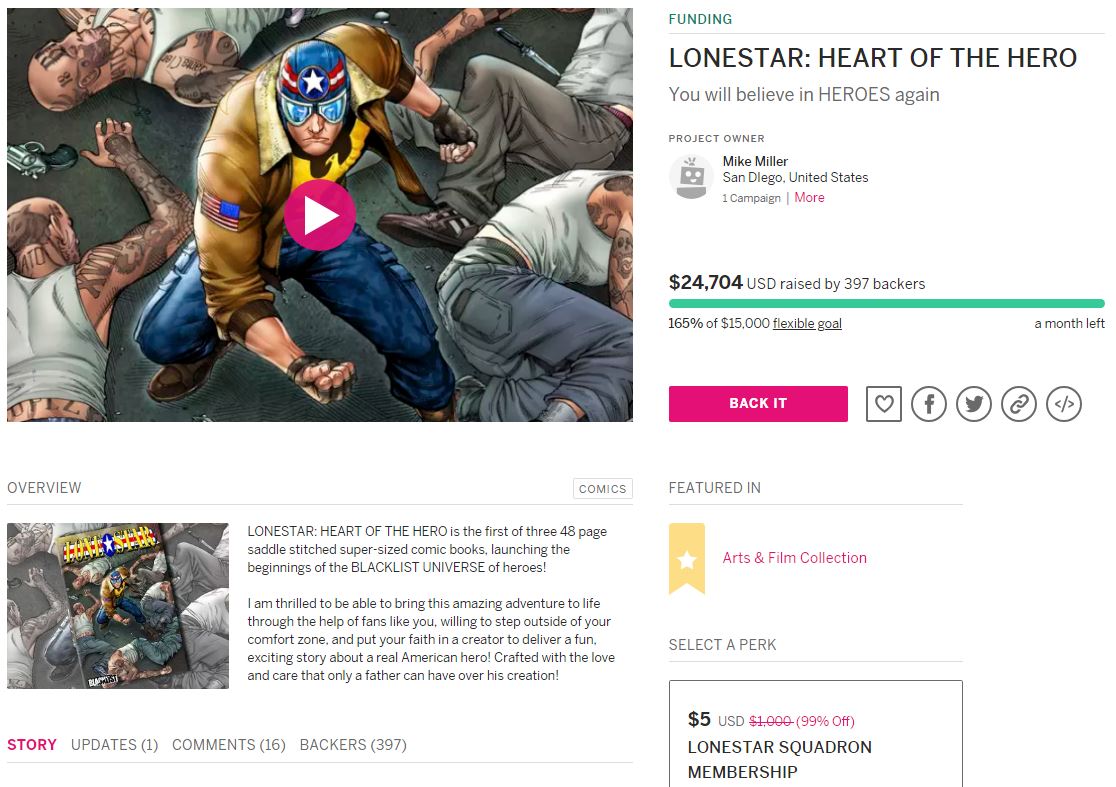 LONESTAR: HEART OF THE HERO! This project is by Mike Miller. No, not the creator of Kick Ass and Kingsman, that would be Mark Millar. No, not the young gun currently playing for the Miami Heat. That is Mike Lloyd Miller. This is Mike S. Miller. Mike is a 26 year veteran of the industry. He has worked as an artist for many comic book publishing companies, including The Big Two. He is also one of the founders of Freedom Forge, and is launching this project as a testing ground for his next big endeavor; Blacklist Universe. 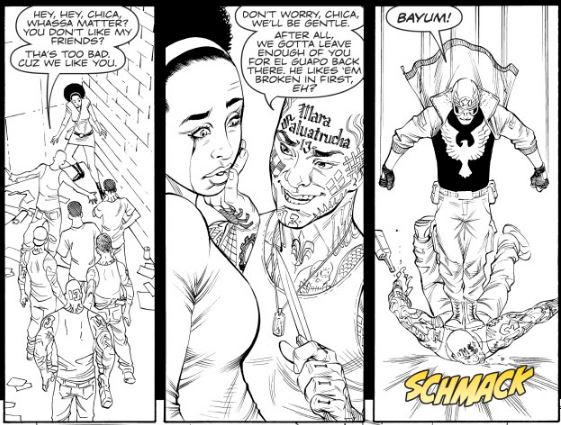 Mike is best known for the comic book adaptation of George R.R. Martin’s Hedge Knight series, but after LONESTAR: HEART OF THE HERO is out, I am sure that is going to change. This project is Mike’s first Indiegogo campaign, and it has been a successful one. The title of the book is pretty self explanatory. It looks like a really fun, patriotic, action adventure comic. I can’t really say that it’s another Captain America Clone, Like; The Fighting American, Agent America, General Glory, etc. The book isn’t even done yet. But if you are interested in seeing what has garnered so much attention . Then check out the campaign here. 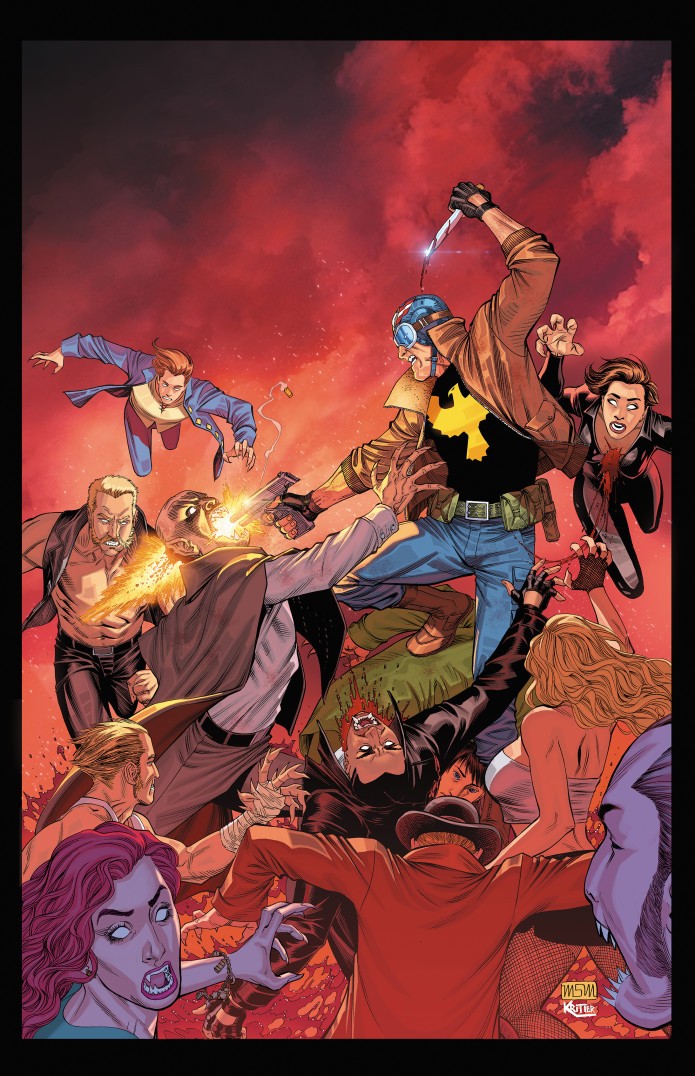 I have the next two installments of Indie Comics Showcase already planned out and there are some great projects I am going to be featuring. I’m trying something a little different this time. Each one will have a certain theme to the comics I am going to feature. I am not going to say what they are, I just hope that you will tune in. I am also working on an article titled, Surrealism In Comics, which should be up later this week. Thank you for tuning in. I hope you will come back.

If you want to discover even more indie comics for your self here are some helpful links.

This Week’s Featured Fundraiser is one that has hit me pretty hard. Jon Schnepp is a person that I have admired and respected for a very long time. After meeting him at a convention a few years ago, I grew to genuinely love the guy and his work. The last update we got about his situation, is that Jon was unconscious and in critical condition. The situation is uncertain but his partner Holly is keeping hope alive, and we have to do the same. If you can, please donate whatever you can. It all adds up. 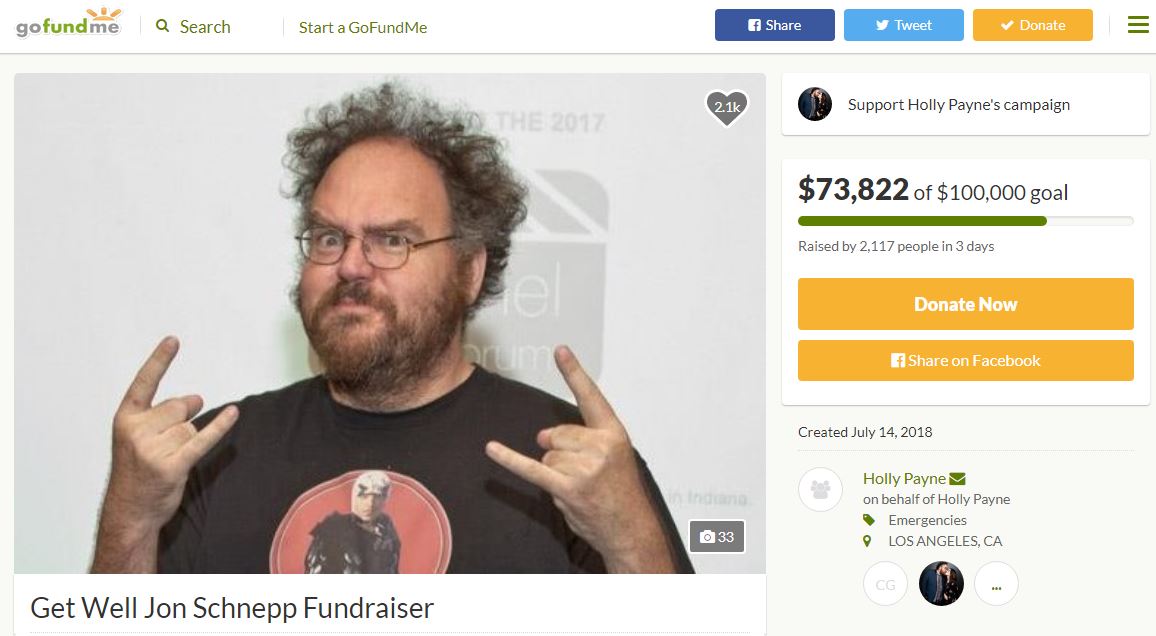