Welcome back to Indie Comics Show Case and a Happy New Comic Book Day To Everyone! If you visit your local comic shop today and can’t really find something you like. Check out these fantastic Indie Comics! Just like last week, I want to shed some light on three very different Indie Comics. These are in various states of funding on either Indiegogo or Kickstarter.

Being part of a community that works together to bring projects like these to life, is the main reason I #SupportIndieComics. I believe creator owned books like these are the future of the industry. And because of the people who show their support, the future is indeed bright.

The first book I want to show case is Duskrider: An Illustrated Novel by Tristan Thompson and his company TriStarr. This is TriStarr’s first Kick Starter and I am thoroughly impressed with, not just the quality of the book, but with how well organized the campaign is.

Duskrider started off as a much smaller story in 2016. The project was expanded upon as Tristan picked up new interests. He started to incorporate things like Retro Wave Music and elements from well known science fiction franchises, like Blade Runner, The Terminator, and Akira. Duskrider is also an incredibly ambitious project that will take up to two years or more to produce. Tristan wants to include animated sequences and music into the digital content. To find out more about this incredible project please visit the kick starter page and if it interests you, show your support.

The next Indie Comic that I will be showcasing in this article is Further: Volume 1, a graphic novel by Holly Adkins and Sky Arc Comics. It is a dramedy or dramatic comedy about two teenagers Manfred Jones and Nicholas “Worth” Worthing, who uncover the disturbing secrets of their town, Furthershire.

Manfred is a musical prodigy dealing with the loss of her dad and the aftermath of the self- destructive decisions she made directly afterwards. Worth, on the other hand, is a spoiled rich kid struggling with the fallout of parents’ deteriorating marriage and the poisonous family legacy that has left his family broken, and him himself plagued by an ancient curse. Further is just an incredibly charming comic with interesting and unique characters and a premise that has a welcoming familiarity but with an unexpected twist.

The final book I would like to showcase in this article is Timmy Lala’s Ice Cream by Bradley Golden @BRADLEYGOLDEN4 on twitter. The story of Ice Cream is as follows: It’s been a rough Winter and Spring. You have bills due and families to feed and the cold is not leaving fast enough. You are wishing for a change. WELL SUMMER HAS ARRIVED!!  No school, no homework !! Just fun in the sun and delicious cold Ice Cream from the friendly neighborhood Ice-Cream Man. What if the local Ice-Cream Man was a Serial Killer who killed innocent men ,women and children, using their body parts as new and delicious Ice-Cream Toppings? Yes, it’s another story with a familiar twist. But the reason I am covering Timmy Lala’s Ice Cream is because of its execution. Timmy Lala’s Ice Cream has some of the best art and most creative paneling of any the comics I have seen this year. The team working on this project, they are all a bunch of absolutely sick individuals, creatively speaking, and they have done an incredible job. If you are a fan of B Level Horror Movies then this is the book for you to back this summer.

Last week I featured a Fundraiser for Bill Messner Loebs, He is still in dire need of our help. For more information you can check last week’s Indie Comics Showcase

This week I would like to share the story of Brian Keene. On June 5, 2018, author, podcaster, philanthropist, and father Brian Keene was badly burned in an accident.  At this time he is conscious and in good spirits but has first degree burns on his face and second degree burns on his body. As a freelance author, Brian does not have health insurance.  We’re not sure at this time how long he’ll be in treatment, or how much the bill will be, but any visit to the hospital is expensive, and will only be compounded by lost wages from not being able to work.

We’re asking the community of writers, horror fans, and just decent people in general to chip in a few dollars to help get Brian so he can back his feet and spend time with his loving girlfriend and sons. We’d be very grateful for anything you can afford to contribute. This Campaign is very close to meeting its goal and getting Brian the help he needs. If you could, please find it in your hearts to help fill in the last bit of funding Brian and his family need I am certain it would be greatly appreciated. 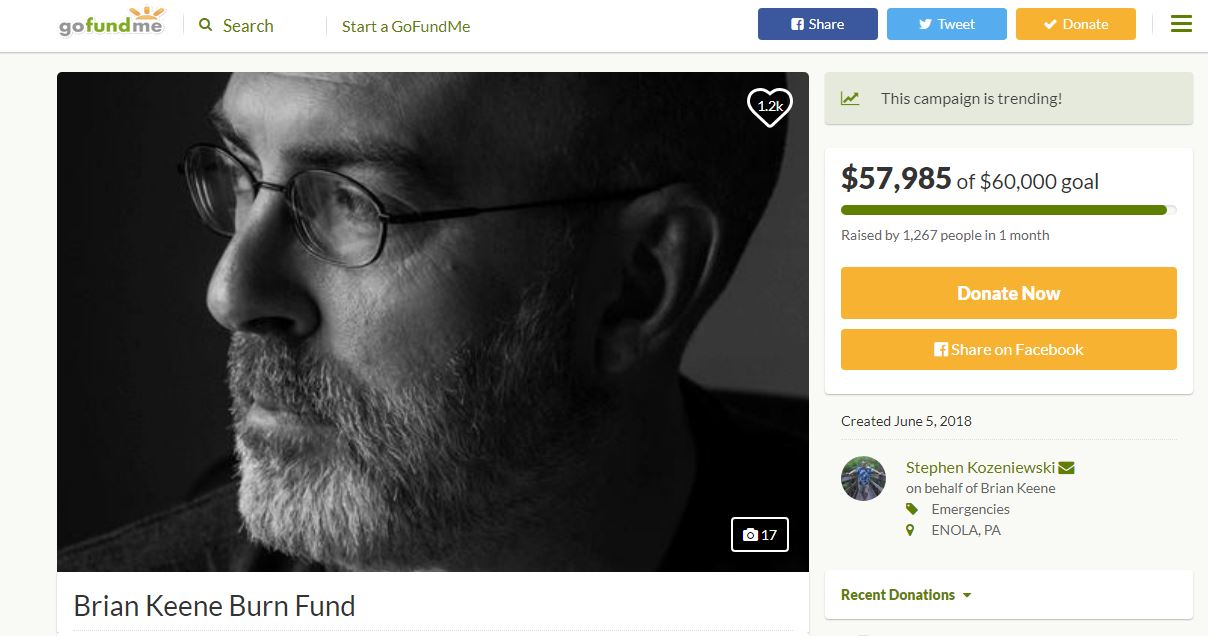 Each of these comics are different, not just from one another, but different from any other comics you can read today. They all have one thing in common: a lot of love and hard work has gone into making them. It’s only right that we show the same when it comes to supporting them. Whether you pledge as little as one dollar or five, it all adds up in the end & helps bring these projects closer to fruition.