Since this year Halloween happens to also fall on New Comic Book Day, of course I had to do a Special Halloween or Horror Themed installment of Indie Comics Showcase for all of you to enjoy!

To kick this Special Halloween edition off I was able to score an interview with Kristen Gorlitz the creator of The Empties: A Horror Comic Book Series About Relationships which is currently being funded Via Kickstarter. This comic has some very creative and intense artwork and the writing is phenomenal. The way it handles the subject matter is incredibly unique. Kristen was fantastic and I truly appreciate her time. I hope you enjoy the interview.

The Empties: A Horror Comic Book Series About Relationships 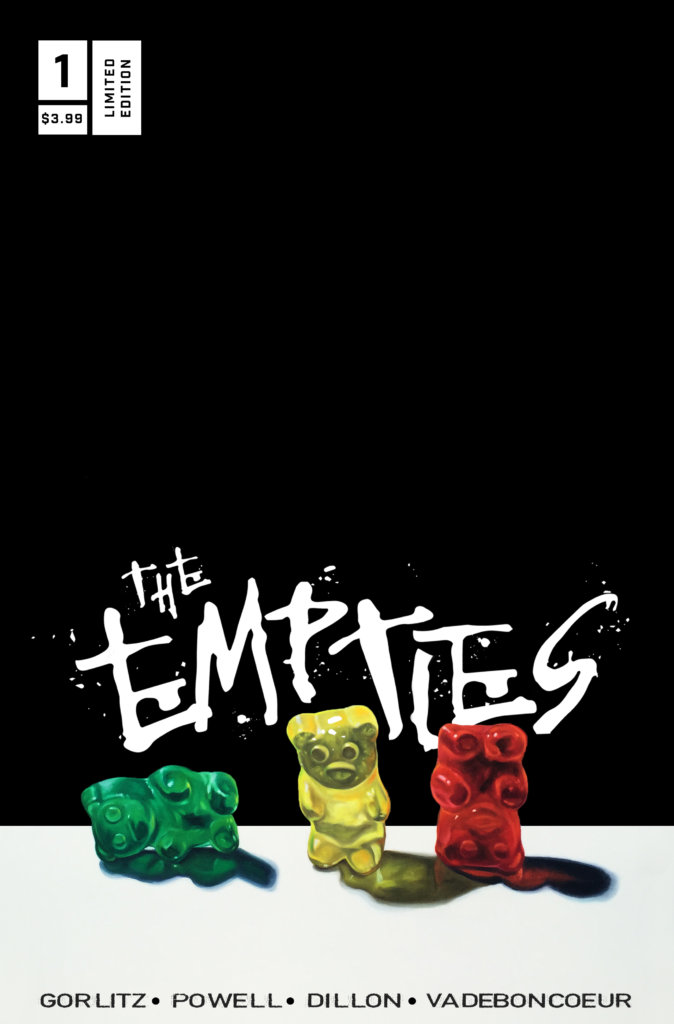 There are many ways to ruin a relationship. Turning into a zombie is one of them…

JOHN: What was the inspiration for The Empties?

KRISTEN: The Empties comes from a series of experiences that I’ve had in past relationships. I’ve seen first hand how people hurt the ones they love, but we don’t mean to hurt each other. It happens because we are so closely involved and we are not perfect creatures by any stretch of the imagination. So, relationships can be scary on multiple levels. They can be scary because we don’t even realize that we are hurting our partner, they can be scary because we care so much about that person that it breaks our hearts to see them in pain, and it can be scary to end things even when they should end, because we care so much. This is very fertile ground for a good, old fashioned horror story.

JOHN:What the story is about?

KRISTEN: The story is about a housewife who turns into a flesh-eating zombie while her husband tries to save her. On an emotional level, it’s about how hard it is to let the ones we love be free. For Derrick, he wants to be happy, and he wants his wife Helen to be happy too, but she’s not, and even she can’t figure out why. But she knows that she’s missing something, that she’s empty, and that’s before she gets sick. When she gets sick, it highlights all of their imperfections as they both fight to survive the disease, and each other.

JOHN:Can we talk a little bit about your writing style and or process?

KRISTEN: I actually write a screenplay first, because my background is in movies. Screenplays help me to get the story focused, but adapting the screenplay to a comic helps really focus on the images. I can cut out a lot of the words/ dialogue for the comic script as long as we find the right image. I also make sure to get lots of feedback from friends and from professionals to make sure that what is in my head is what is actually conveyed on the page. It takes a while to get all of this feedback, and to find the right images, but it is instrumental in creating the right tone and for telling the story the best way possible. 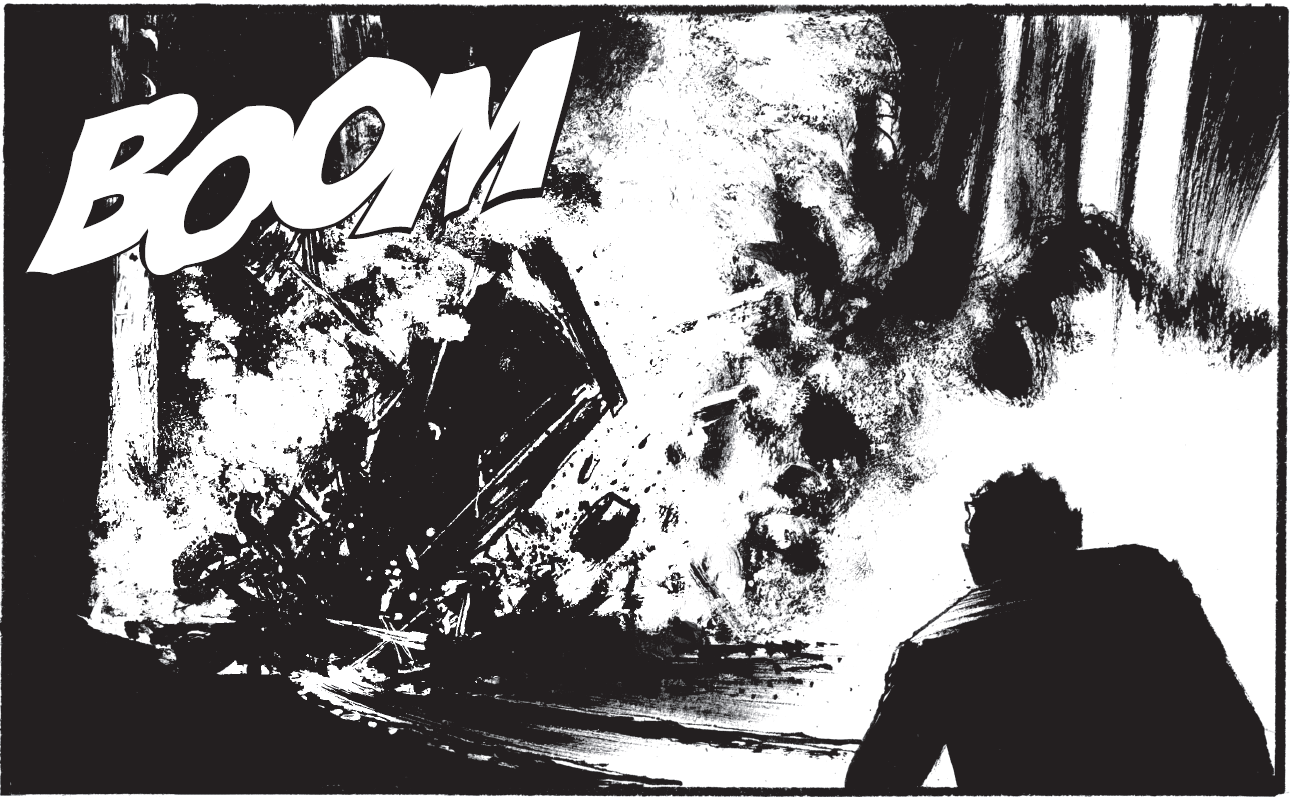 JOHN:How is it that you turn past experiences into a comic about zombies?

KRISTEN: Well, zombies are mindless creatures who do nothing except consume things. Usually they are also undead, so they can’t feel anything and they are difficult to kill. My zombies are still alive, at least in this series (though I have plans to expand it). In The Empties, we watch as a human catches the disease and go all the way through the process of losing ones mind. Now, I think anyone who’s been in a relationship knows how easy it is to lose your mind. And then you’ve probably heard that love is all consuming… The leap to zombies is not so much of a stretch then. Haha.

CHECK OUT THE KICKSTARTER FOR THE EMPTIES HERE!

Super! Returns from the Grave! 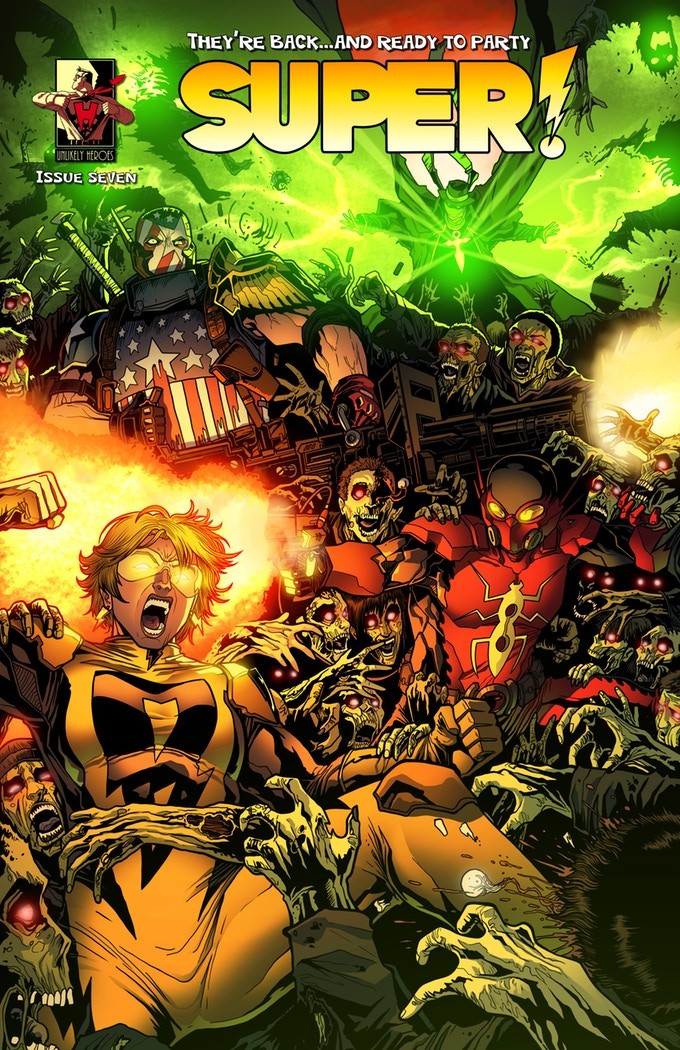 Super! Returns from the Grave! is one of my favorite projects of the year. Apart from being an interesting twist on an familiar staple, it manages to imbue it with a really distinct since of humor. I’ve lost count of how many times I have re-watched the intro video. It’s had me in stitches each time. This comic has incredible art, the characters all have great designs, and the story is just so well paced, it makes for an incredibly fun read. If you want to learn more about it, I highly recommended watching the video and backing the project. 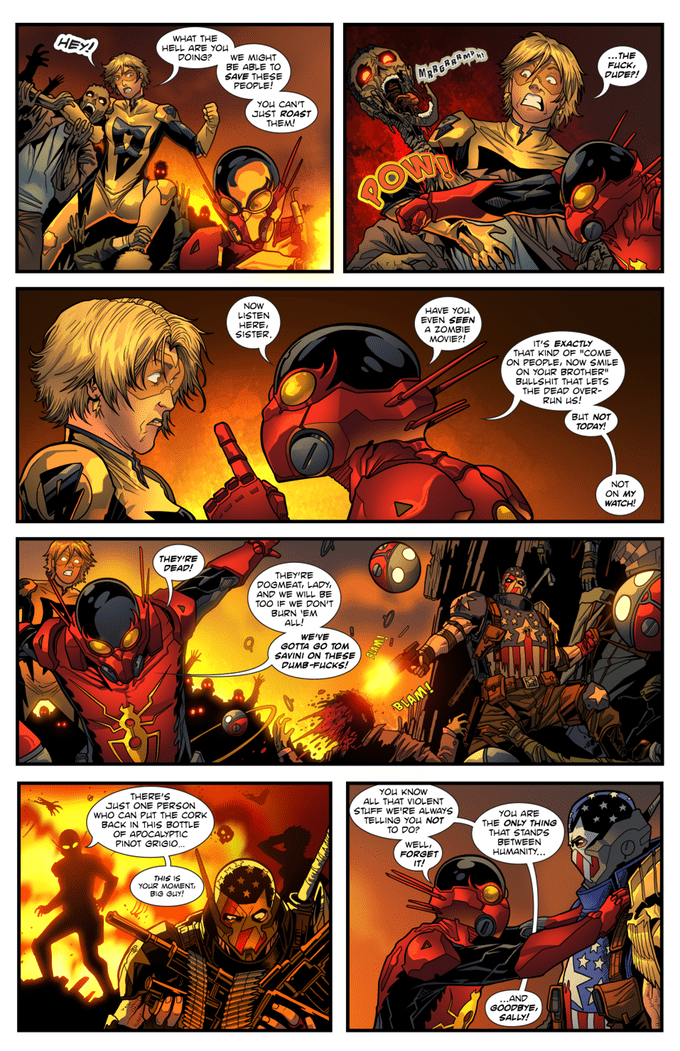 SUPER! follows a ragtag team of amateur heroes as they struggle to make a name for themselves in a universe dominated by more popular, established teams. Amidst the craziness and chaos of a new comic universe where supers are commonplace, the greatest superhero story of our generation is about to begin… After spending what seemed like an eternity frozen in the grip of living death, SUPER! has finally risen from the grave…and it didn’t come alone. Rejoin our intrepid heroes as they go in head first and nipples deep into a full-on zombie cataclysm. Can Silhouette find the secret to stopping the unseen mastermind behind the zom-pocalypse? How will our heroes manage to keep their butts from being chomped by the seething hordes of the living dead? Does even Blood Death have enough bullets to take on the funk of 40,000 years??

I spoke with Zack Dolan the creator and this is what he had to say.

JOHN: What was the inspiration for Super?

ZACK: That’s a pretty broad question, that I could really answer with “the entire length and breadth of all superhero fiction of the last century  from all around the world” because it really draws from so many genres  and concepts, but probably the most succinct answer would be those  massive ensemble comics where a whole universe is happening in the same book at the same time like Astro City, and especially the ones that try  to have some fun with that concept like The Tick or the Venture  Brothers.

JOHN: Can you catch out readers up as to what Super is about and where the story leaves off in Returns From The Grave?

ZACK: It’s been a wild ride so far in Cosmopolis as we were introduced to an entire world of superheroes and villains all fighting for attention in the dense, competitive market.  We were introduced to Blitz and her team of heroes – who have still been unable to settle on a team name and argue about it like a high school band – and their arch enemies “The Fearsome Fivesome” whose leader The Black Atom and Blitz have a connection so secret even they don’t know about it.  We’ve met mad science born monsters out for revenge, we’ve met the elderly community of supers and find out what happens when heroes finally get old, and we’ve discovered that there are entire worlds of unknown terrors lurking just out of sight in the shadows of Cosmopolis. Those shadowy horrors are just where we left off as the resident magic expert on the team, Silhouette, discovers a terrifying plot to swallow the city whole in an abyss of darkness that unleashes demons, monsters, and of course, a slobbering horde of the living dead.  Surrounded by flesh eating zombies in a city collapsing under chaos, we’re waiting to find out if our heroes have what it takes to save the world from an age of endless, sticky darkness.

JOHN: I’d also like to ask about the writing and drawing styles and processes.

ZACK: There’s not too much interesting to tell there.  Generally I start with the script and thumbnails sketching out the breakdowns of the panels till the end of the issue.  Then we take those sketches and I draw them full size in pencil and then scan them and send them to Laurie, who inks them digitally.  Then they are passed to Eve our colorist, who….well, colors, obviously.  We aren’t super strict about this regimen and pass the pages back and forth, tweaking them to be better as we go, and when the art is finalized we send them to Erek for lettering and mounting for print and that’s pretty much it!

ZACK: We currently have a fully-funded Kickstarter still running with just under a week to go, so it’s a great time to jump on board and catch up with the rewards that let you have the whole series, plus the conclusion to the long awaited cliffhanger and all kinds of other goodies. And as I said, since it’s fully funded, anyone who joins now is guaranteed to receive the rewards.  You can find it at www.uhstudios.com/kickstarter.

Also follow Unlikely Heroes (@UHStudios ) on Twitter to find out more information about their upcoming projects. The campaign is on its final week so make sure you check it out as soon as your are done with today’s installment. Click here to check out their Kickstarter! 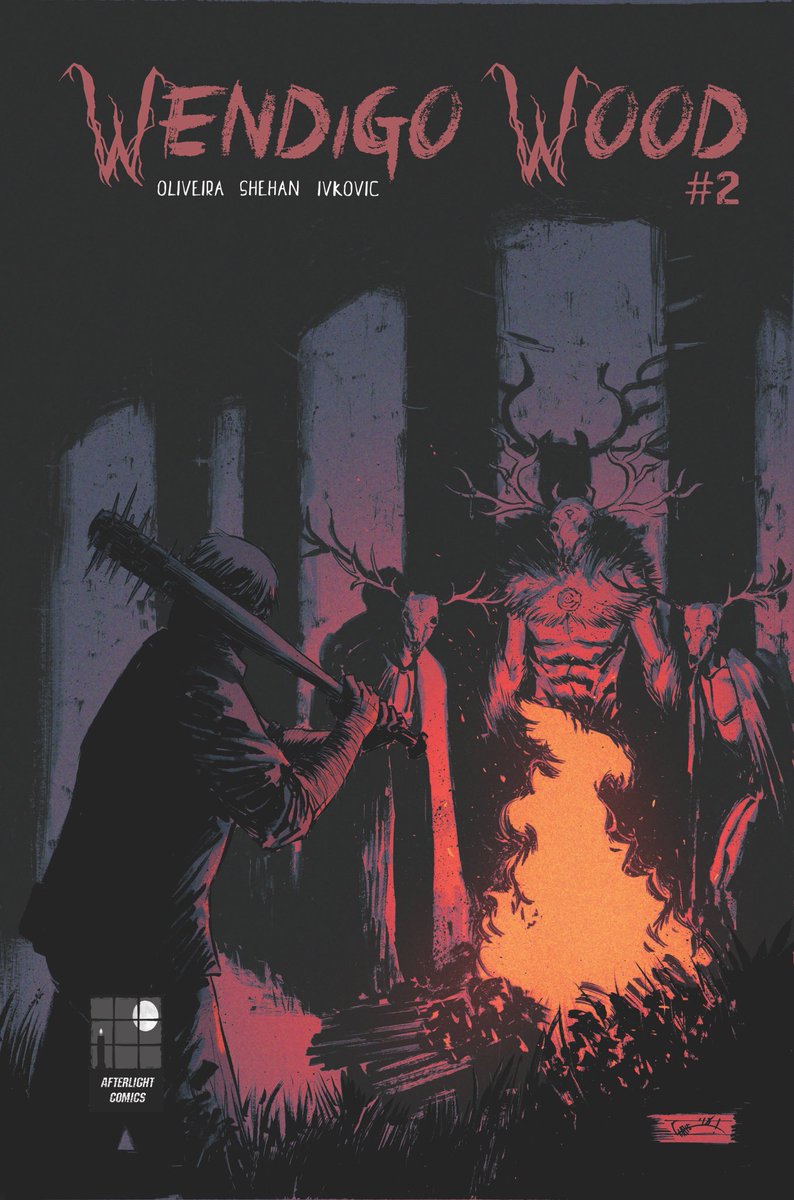 In my very first installment of Indie Comics Showcase I covered Wendigo Wood #1. It’s been one of my favorite projects this year and AfterLight Comics has granted me access to some preview images of issue two, before the campaign goes live tomorrow. So a huge thank you goes out to Joseph Oliveira and the rest of the After Light Comics Team, you guys are amazing!

Wendigo Wood #1 written by Joseph Oliveira, @Afterlightcomic on Twitter. It’s a story about a little girl who goes missing in Whisper Wood, also known as Wendigo Wood. There are stories of creatures lurking in it. But anyone who ventures too deep into the woods, never returns to confirm them. Now her father, Hank Williamson, a retired war veteran has to traverse the wood in search for his missing daughter. Join him and see what mysteries you can unlock together.

Wendigo Wood #2 goes live November first. I will be posting the link to it here once it does. Issue two continues after where issue one left off. It look like they are kicking the mystery aspect of the series up a few notches, as well as the frightful eagerness of wanting to know what is around corner, or on the next page. I hope you enjoy the preview. 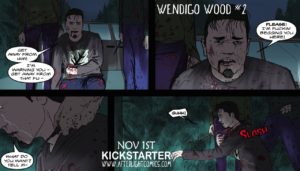 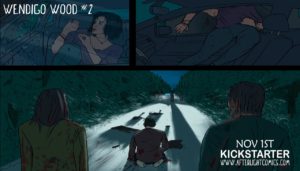 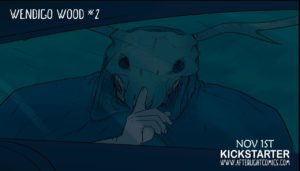 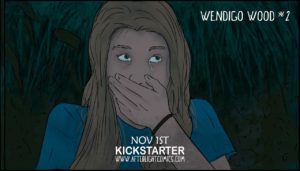 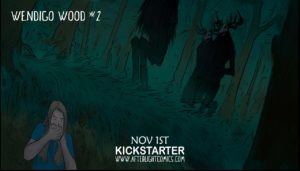 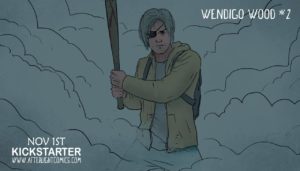 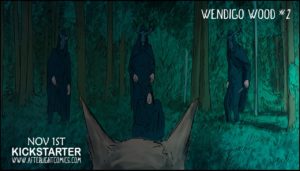 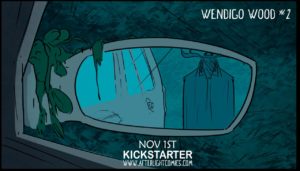 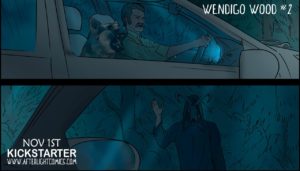 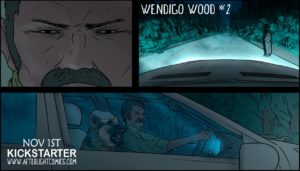 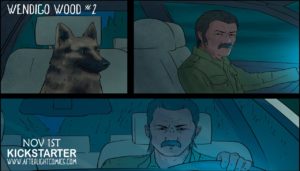 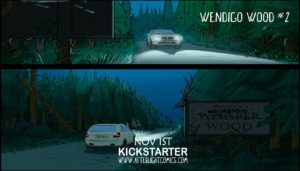 Being Halloween also means that today is the last day to grab your copy of Jon Malin’s Graveyard Shift which we have covered in depth here at Bleeding Fool. It’s the story a group of scientists who are murdered and forced into their own regeneration experiments. Finding they’ve been given supernatural strength, speed and healing abilities, they must wage a war to save the Earth from those who betrayed them and also seek to enslave humanity. The creators call it a mash-up between Universal Monsters and the X-Men.

Halloween also the last day to grab Pat Shand’s Spooky Girls which we just covered in our last edition! It’s a full-color graphic novel made up of 4 new monster comics: Jenny the Werecat, Vicky Slime, Punk Teen Demon Queen, & Tarantula Twins. Perfect for the trick-or-treaters in your family!

That’s it for me this week! Hopefully you’ve seen some projects that you’re ready to support!
Be sure to follow Indie Comics Showcase on Twitter at @Indie_Comics and…