On June 29, 2018 the initial crowdfunding campaign for Ethan Van Sciver‘s independently produced comic book, Cyberfrog BloodHoney officially ended. Now, after a few unexpected delays, the much-anticipated ALL CAPS Comics release has been completed, printed, and packed and Ethan reports that copies are heading out this week to backers. 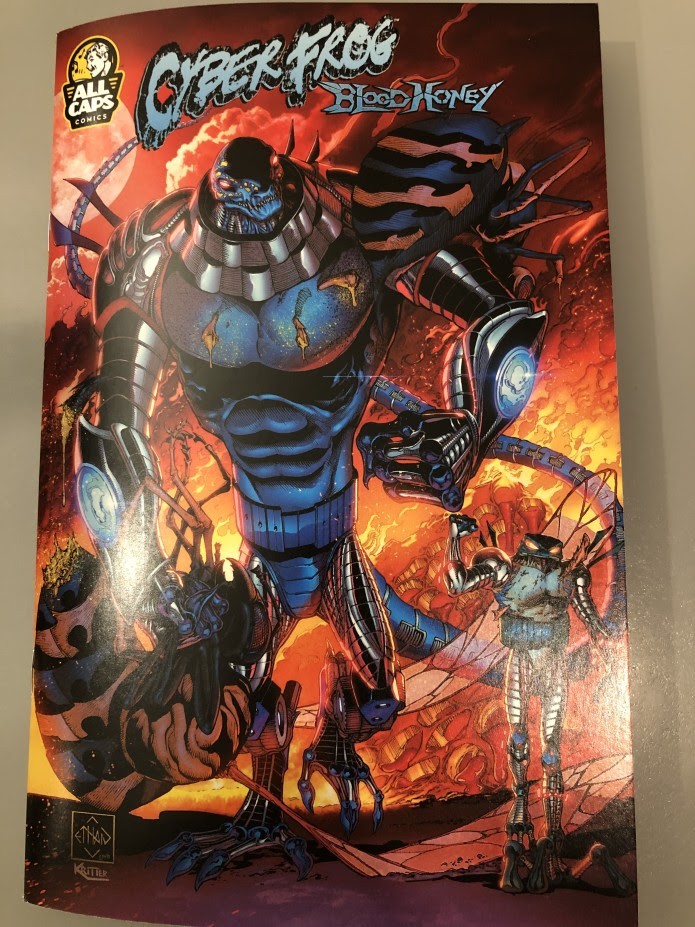 CYBERFROG BLOODHONEY is now bound, printed, and being shipped!  I’ve received advanced, completed, final copies of the NON-Chromium cover, which I show you here.  I received them Thursday night.  They were easy to make, I’m told.

Your books, which the chromium covers are also bound and being shipped this week.  Now, here’s a photo of the uncut sheet of finished chromium covers.  There are three CYBERFROGs and one SALAMANDROID per sheet.  So I gather that there was a final coating of clear plastic that had to be placed over the metal in order to protect it?  Keep it flat?  I’m not really sure.  But it looks nice.  You can see the transparent coating laying outside on the edges of the sheet.

It was a tedious and involved process that required some experimenting between the two printers.  One is doing the interiors of the books and one is doing the covers.  One is in Philadelphia, the other is in Canada.  There was a small delay in finding a way to bind the covers to an 80 page book…it’s never been done before.  The book was so thick.  So they used a combination of glue and staples, after the first attempt failed, putting us back two weeks.

These books need to be sturdy and hold up, not fall apart, obviously, so all of this was frustrating, but very important to get right.

I heard over and over again, as I vented frustration at the constant delays, that we were “reinventing the wheel, here.”  Nobody has used chromium for comic books in years and years, and never on an oversized comic.

But it’s all finally worked out, and CYBERFROG BLOODHONEY will be in people’s hands beginning this week.

Updates will be coming frequently now that we’ll have crates of books and signings to photograph and talk about, so prepare to be dazzled!

Thank you for enduring this wait and for making this possible.  Frogs all over the world will have their hero within days, and so will you!

We’ve sometimes teased Ethan about the delays, but I for one expect his future comics projects will turnaround with a bit more deftness now that he’s finally experienced doing it all himself for the first time and triumphed.

If you’re one of the thousands of backers who helped bring this successful campaign to life, look for your copies this week!