Illegal Comics or How I Learned to Stop Worrying & LOVE ComicsGate 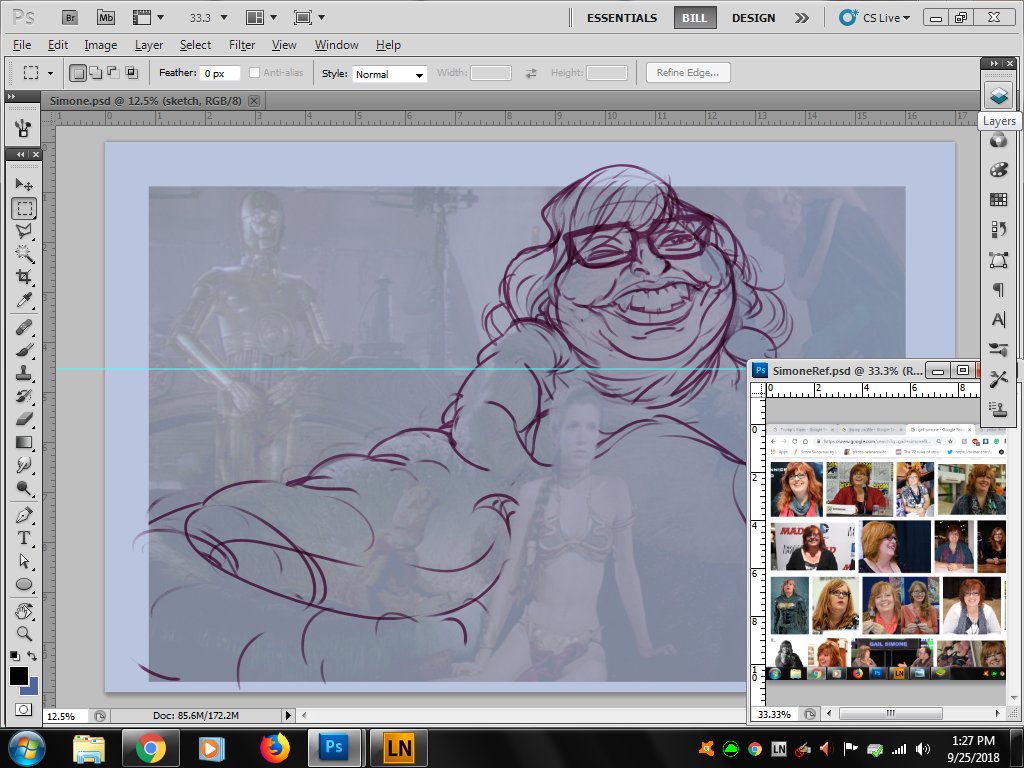 TL;DR: The download links for 250 pages of comics and art can be found below the wall of text.

Hello, my name is William Dean Blankenship Jr., and you’ve probably never heard of me. There are two reasons for that;

1: I am a reclusive, obsessive asshole, and

If someone is more than good enough but doesn’t have any clout in this industry, they’re best kept secret. But, I’m not so young anymore, and while I’m still hungry, I can tell nutrition from junk-food nowadays. 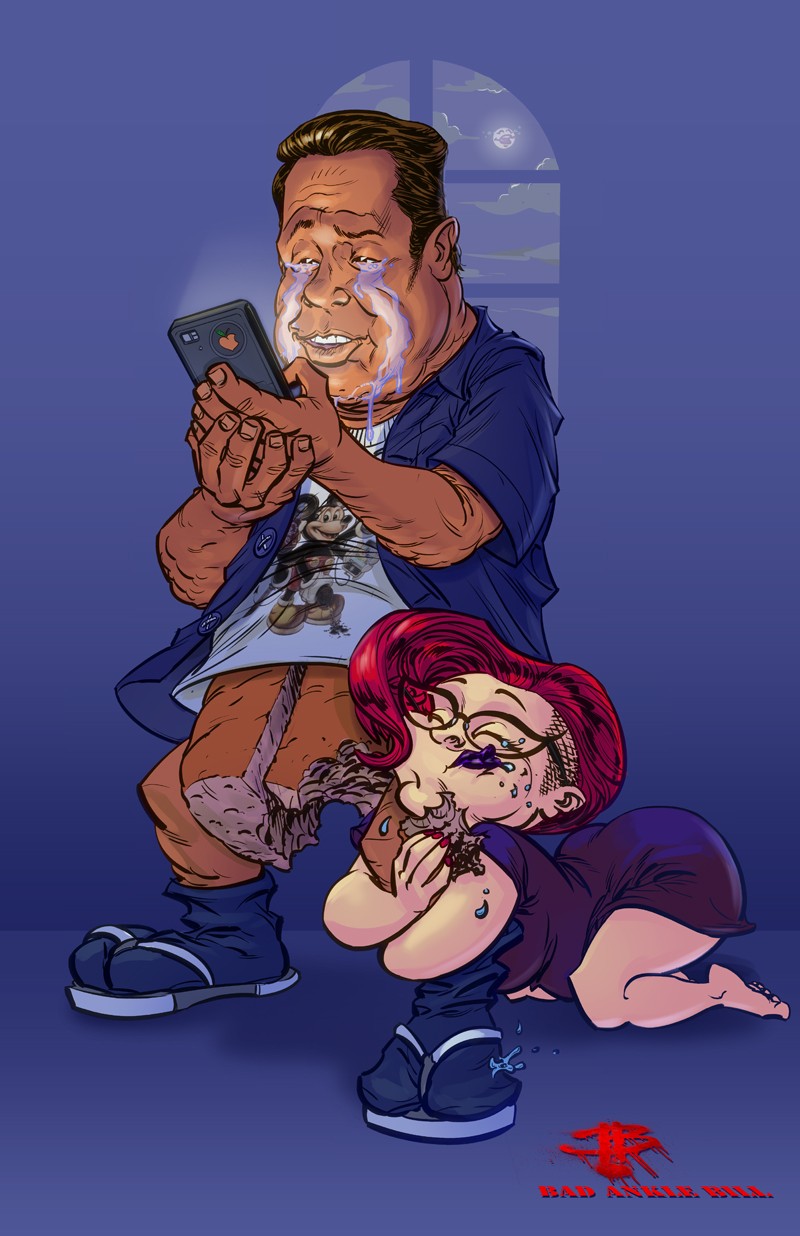 So, there’s this thing called #Comicsgate. You might not have heard of it, but if you’re a regular reader at BleedingFool, you probably have. When I first heard of it, all I kept hearing was people calling them a “bunch of Nazis”. But I’ve been around actual Blanco Bigots, so I know how to smell them out. I’ve lived in Northern West Virginia and Northwestern Pennsylvania most of my life. They’re hard to avoid in this area. So I decided to start investigating. Consider it “Gonzo Journalism; Fear and Loathing in the Comics Industry” or “Notes From a Veteran of the Pop-Culture Wars”.

So I decided to get fully embedded.

What have I found so far? That most people suck. I find this often, regardless of the imaginary lines of culture, class, or creed. Yet…

That’s one of my favorite words, “Yet”. Because it implies both reconsideration and hope.

But I digress. What I found in ComicsGate, other than the usual misconduct of a few human beings, was a little bit of hope. I found people of all cultures, classes, and creeds being passionate about a craft. Not a career, not an ideology, but specifically the visual narrative of sequential art, aka comics. I found people who were tired of gatekeepers, tired of being politically lectured through storytelling. I found “the Others”, as Timothy Leary would put it. The fun ones. The interesting ones. The ones with something to say, without anything to benefit from what’s been needed said.

Because let’s be honest, this industry is a bit of a dumpster fire right now. 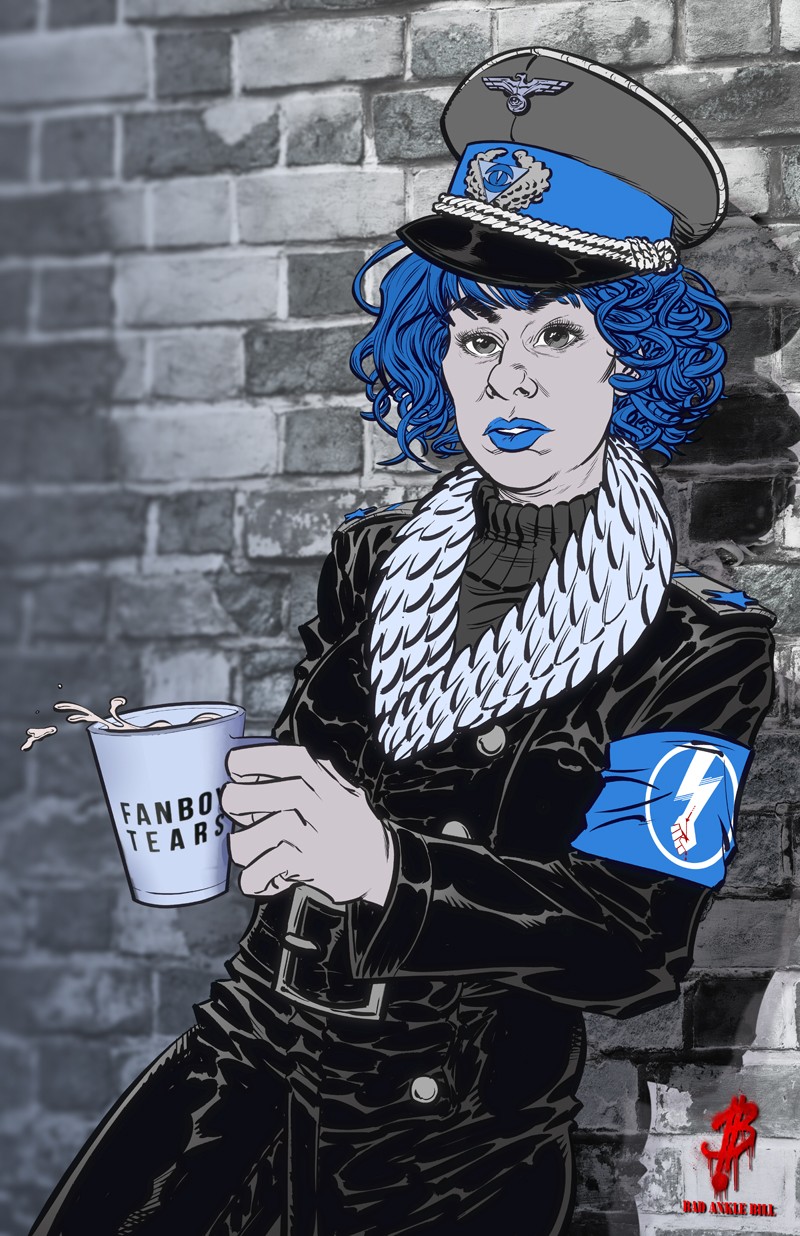 However, what I saw that I felt was missing was propaganda. For a bunch of artists, I figured this would be obvious. Not propaganda in the modern American fascist vein of public relations, but the use of imagery and words to affect consciousness. So I started making some. It’s pretty good. If you’re reading this I’d say there’s a 60% chance you’ll like it. Better than average. Better than most.

And with most of my investigations, it appears I’ve fallen in, at least a bit. The people I’ve met and connected with over the past month have made me reconsider my notions, whether coming from the left or the right. And they’ve given me hope, which is a priceless commodity in this economy. The almighty “Yet.”

So I wanted to give back. And I have decided the best way to do that is to engage in CopyWrong; the illegal redistribution of art, so to speak. I’ve never been as interested in rights as I am responsibilities, and I feel it’s my responsibility to give back. Cuz you’ve gotta give it away to keep it.

I believe art is the last bastion of freedom we have. And I want to make as much art and give it to as many people as I can because you gotta give it away to keep it. And you don’t have to support comicsgate, it’s just a campaign that’s tied to it, because I’ve found the support and love for my work in the comicsgate circles while I’ve been working a decade to find that same support in the comics industry and been left wanting. So, I want to give back to the community. I don’t like it when companies take advantage of talent, which Action Lab has done to me and many others as it has outgrown the britches it was formed from.

So, with a little help from Bleeding Fool and the @WeAreComicsgate twitter account, I’d like to give you some of my comics and art for free, in digital format obviously, via my GoogleDrive links below – about 250 pages worth. 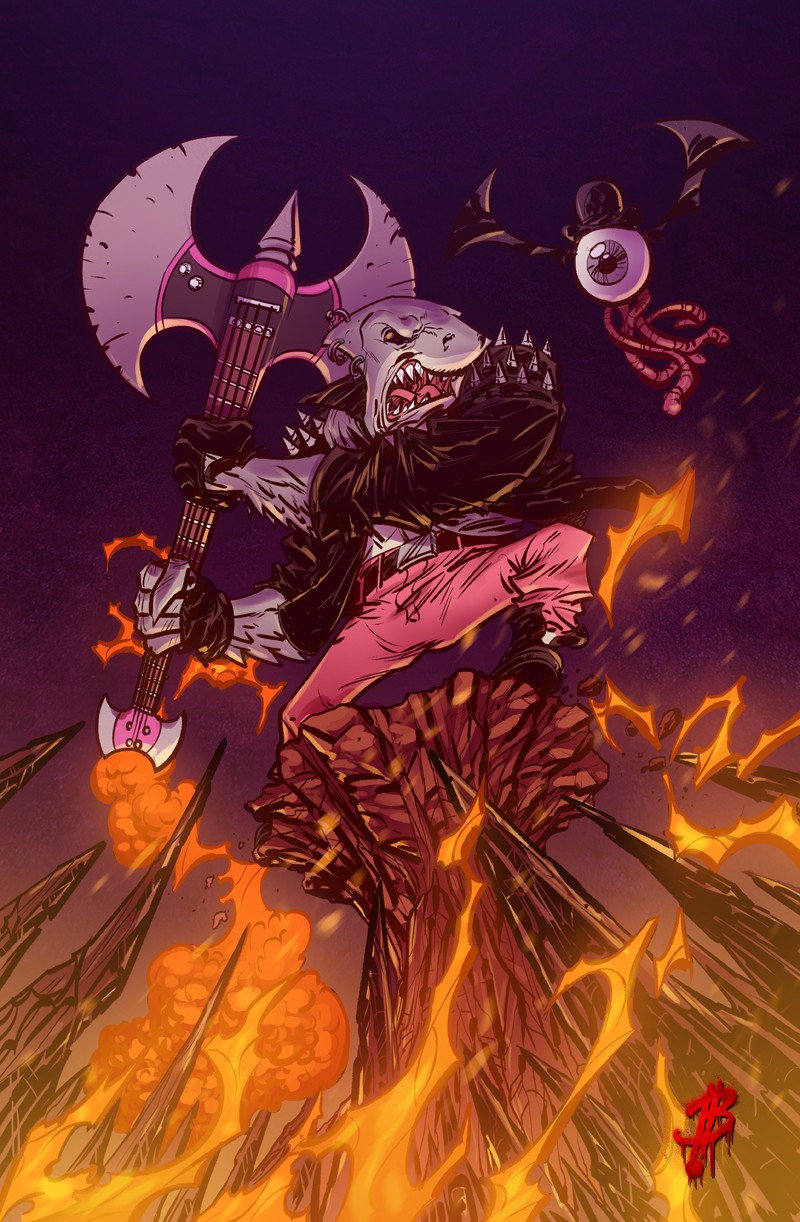 First off is the first 20 pages of my creator-owned project The Thunderchickens. It’s the only one of this bundle that can be found for free online. However, I’ve added a sneak peek at the next 5 pages at the end, just to make it worth downloading.

Second, and possibly most controversial is Double Jumpers vol. 1. You see, I haven’t gotten Action Lab’s permission to share this book in a digital format or otherwise. However, it might be the best indie comic you’ve never read, or at least that’s the way the writer Dave Dwonch describes it. I must mention, I also don’t have Dave’s permission to share this book. It was never promoted properly as Jeremy Whitley, even in his duties as Marketing Director at the time, could never manage to do more than promote his own book, the critically-acclaimed Princeless. Don’t get me wrong, Princeless is a great book, even if it’s follow up titles have been a bit derivative and pandering. I just hope Jeremy strikes lightning again, lest he becomes a Millenial Shyamalan of comics.

Thirdly is some unreleased work. The first issue of a book I was commissioned to do called Bosom of Abraham which has unfortunately been stalled in production. Also, fourthly, from the same collaborator (Hugo Menezes de Mattos) is some animation pre-production art for a project called Defenders of Tchooka, complete with storyboards and designs for a short that has yet to see the light of day. I also haven’t gotten permission to share this work, but Hugo is a lovely and affable fellow, I’m sure he wouldn’t mind seeing the work put in so far being appreciated.

Fifth is the Madcap Sketchbook Vol. 1: The Psych Ward sketches. This is a very personal piece of work that speaks for itself. I hope you like it. I made it for YOU.

Sixth, I’ve included the original sketchbook/press kit for the original incarnation of The Thunderchickens from the end times of DC’s Zuda contest. Because sometimes it’s fun to see how far things have come.

And last, but not least, I’ve included 52 pages of comics from my early, self-published work called Special Edition. It’s a project that I hope to get back to one day, but we all know the universe is non-simultaneously apprehended as Bucky Fuller would say. 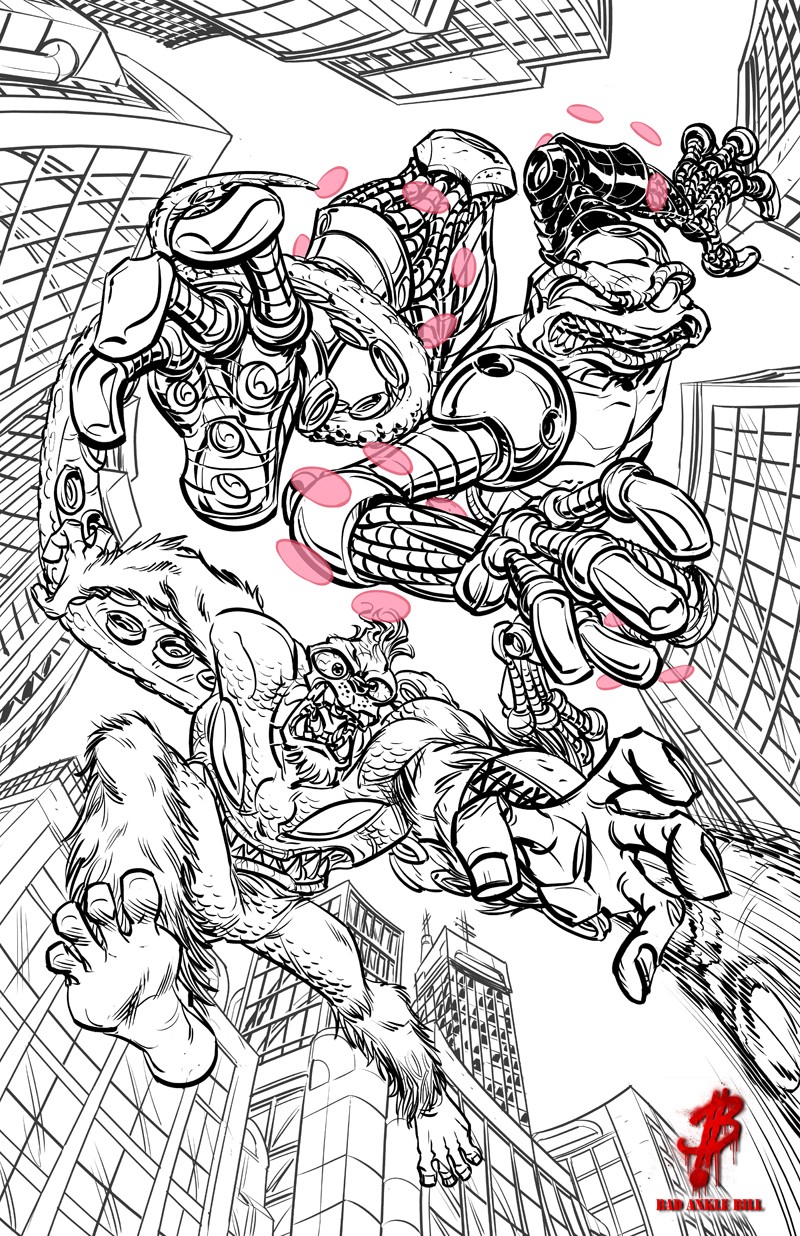 So I hope you dig it. Because all the work within was made with passion, in the hopes that it might affect another person’s consciousness. Post comments below on your thoughts or hit me up on Twitter @badanklebill If this #Impropaganda succeeds, then that’s bigger than any career or ideology I can think of. Much Love and Infinite Mojo to you if you’re reading this, and even if you aren’t.