“Given the alternatives in the comics medium to being precious, to simply allow all of your art to be altered, your writing to be altered at an editor’s whim, when most of the editors in comics quite frankly would probably struggle to give you an actual definition of the verb ‘edit’.”

Alan Moore, the celebrated comic book writer announced—for the third time in a few years—his retirement from writing comic books with the release of The League Of Extraordinary Gentlemen: The Tempest #6 this month. As it has become a tradition within the series, the inclusion of a parody fanmail column with jokes was part in this last issue of LoEG. In issue #6, that parody column included a sardonic mock-letter from “Hiram J. Comicsgate III” which reads: 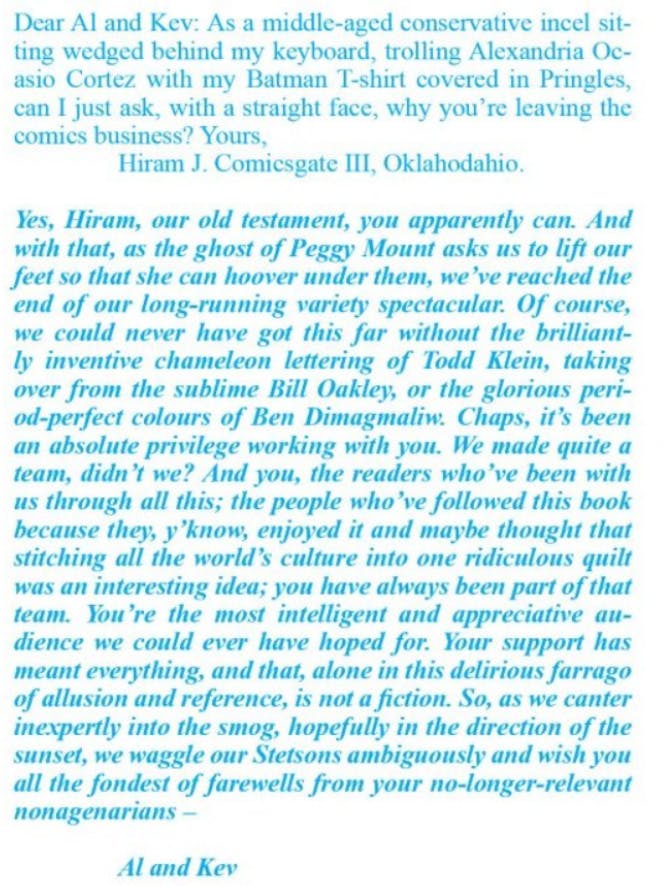 Cute, isn’t it? This cartoonish depiction of a #ComicsGate supporter is just that and it doesn’t even devolve in Alan Moore’s actual argument on the controversy or in scolding the straw man. It gives way to a thank-you note and a farewell where he alludes to both the creative team and the fictional characters as testaments of the past and “…the most intelligent and appreciative audience we could ever have hoped for.”  This sounds like mixed messaging since it’s still essentially a reply to Hiram’s character.

Although I wouldn’t read too much into it. The page itself was never meant to mean anything other than a joke and in the worst-case-scenario, as Moore himself has put things before:

“I do prefer to criticize things from a position of ignorance.”

If anything, this is the mildest criticism from the opinionated writer in the history of his “position of ignorance” which includes the time when he publicly claimed that Stan Lee took credit for the creation of Captain America—created by Joe Simon & Jack Kirby in 1941, which took place before Lee even started working in the comic book business. This claim was made without citing any actual sources to verify his borderline slander. The collection he mentions where he claims that Stan Lee’s appropriation is mentioned has never been produced which, if it were true, is something very strange in this business. That kind of scandal wouldn’t have stayed a secret for long.

In any case, I believe that this parody letter is effectively a compliment for the #Comicsgate consumer hashtag which shares opinions that Mr. Moore has held, and frequently acted upon, for nearly three decades. Especially when contrasting it with the following opinions which he couldn’t have written in a brief, playful fake letter page and had to be published as statements in media ranging from comic book fanzines to news programs for most of his career.

“You have to remember that the comics industry was set up in the 1920s by Legs Diamond, Meyer Lansky, it was set up as a cover for bootlegging. I’m talking about the original gangsters, as I believe the young people like to phrase it these days, the Meyer Lansky’s and the Legs Diamond’s… The ethics of the comics industry have not changed since those days when they were cheating Jerry Siegel and Joe Schuster, who were two teenagers from Cleveland, who had created Superman, and National Comics, they waited until Siegel and Shuster were going off to fight in the Second World War. And then they told them that ‘we need to own the characters while you’re away, but you’ll get them back as soon as you return.’ These are the ethics that the industry runs on, they’ve not changed significantly in 70 years.”

“I am finished with comics and disgusted with the practices of the comic book industry…  the way I understand the industry to be run now, there are probably investors out there with piles of cash that are looking for something to invest in… When Dave Gibbons phoned me up, he assured me that these prequels and sequels would be handled by the industry’s top-flight talents. Now, I don’t think that the contemporary industry actually has a top-flight of talent. I don’t think it’s even got a middle-flight or a bottom-flight of talent. I mean, like I say, there may be people out there who would still be eager to have their name attached to Watchmen even if it was in terms of ‘Yes, these are the people who murdered Watchmen.’ I don’t want to see that happen… the comics industry I am repulsed by, and this is not anything that I went out of my way to engineer.  I had nothing but love for the comics industry when I entered it.  It could all have been so different.

The only thing that happened was that when I felt that I was being cheated and robbed, where initially we put forward lots of sensible ways that that situation could be rectified with no hard feelings on either side, these were completely ignored and indeed everything I’ve said since has been completely ignored, even my request that Dave Gibbons shouldn’t phone me up with more messages from his bosses at DC… So you know, it’s not as if I have some vendetta against the comics industry, I just want them to leave me alone and to leave my work alone.  I don’t want anything to do with the comics industry in future.  This is regrettable because I’ve got a lot of old friends in the comics industry.

However, given the way that Dave Gibbons was apparently used as a messenger boy, it seems to me that I can’t really afford to have any contact with anybody who is employed in the mainstream comics industry… Just simply get some of your top-flight talent to put out a book that the wider public outside of the comics field find as interesting or as appealing as the stuff that I wrote 25 years ago.  It shouldn’t be too big an ask, should it?  I wouldn’t have thought so.  And it would solve an awful lot of problems.  They must have one creator, surely, in the entire American industry that could do equivalent work to something I did 25 years ago.  It would be insulting to think that there weren’t.”

It’s possible not even former industry creators now supporting #ComicsGate like Ethan Van Sciver, Chuck Dixon, or even my humble self have ever been this harsh in criticizing the American comic book industry, yet the Northampton writer has been quite vocal with his attacks on the Marvels & DCs since the ’80s and somehow he is now championed by either deceitful or quite naive comic book pundits and creators as “attacking” the supporters of a consumer hashtag.

We’ve seen before how it looks like when Moore takes swings in the media. The joke letter is practically a complimentary tip of the hat in comparison.

For my money, Alan Moore stands with neither and really doesn’t care. He assures us he hasn’t read superhero comics since he wrote Watchmen. He has gone out of his way to make it clear he thinks little of that genre and the way the modern world regards superheroes. I’m betting some social justice minded creator pestered him on the matter and that’s how the satiric letter eventually popped. It’s not like Alan Moore is active on the internet at all, and he seems more preoccupied in working on his prose books and films.

Alan Moore mocks comicsgate with a faux letter in his latest comic (League of Extraordinary Gentleman #6).

If this is how the prog-regressives in the comic book industry win battles, they might have lost the war 30 years ago. After all, to quote that popular Industrial tune: “Alan Moore knows the score.”