Charges of “sabotage” have begun swirling around Mitch Breitweiser’s crowdfunding campaign for his latest project The Futurists: Noah’s Saga. The campaign is currently on Indiegogo and is tracking to finish around $37,500. While that level of backing is nothing to sneeze at, this substantial amount represents a stark decline of close to $126,000, or 78% from his previous performance of Red Rooster, which actually remains at an unfulfilled status in addition to being well past its original March 2019 promised date.

Such a backing decline is no doubt disappointing to the Breitweiser’s who have recently announced on the Updates page for Red Rooster that their new venture ‘Allegiance Arts’ has entered into a partnership with a well known retailer (I’m speculating Walmart), to deliver over a million comic books. As indicated in the Indiegogo update, this necessitates a major investment of funds in order to, “…build the teams, create the titles, create the company, hire and train staff, scout talent, negotiate contracts, invent a marketing campaign, produce assets, and so much more.” Furthermore, Mr. Breitweiser’s update indicated that he was seeking “startup capital” in order to make the necessary investments, which makes me wonder what happened to the money he raised for the Red Rooster campaign. For Mitch’s part, he does say in the FAQ on their campaign page that backer funds from Red Rooster were not used to fund the Allegiance Arts & Entertainment Company. 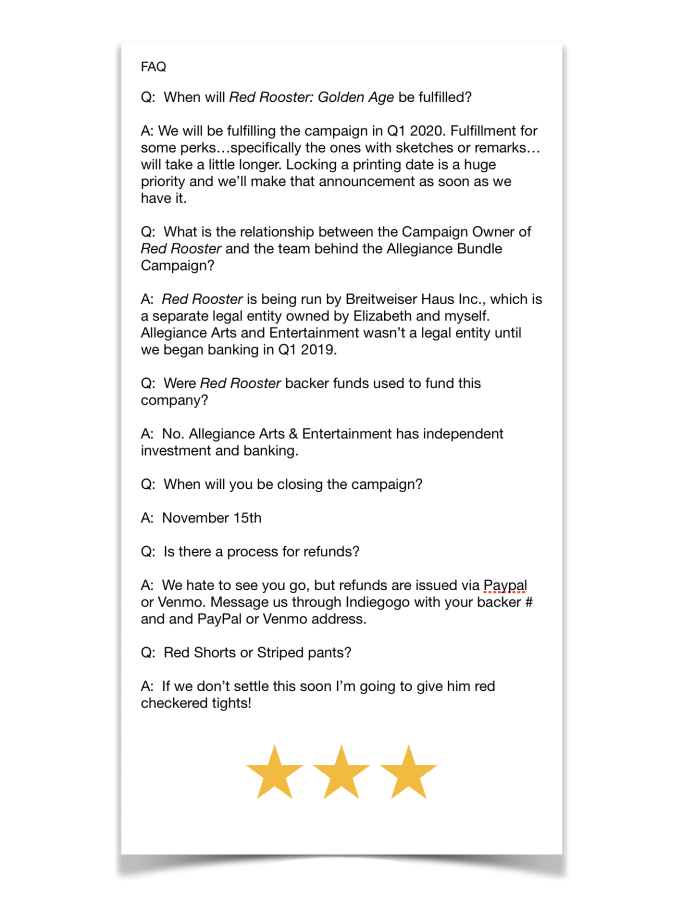 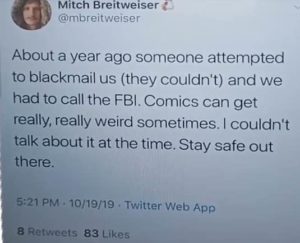 The unexpected decline in backing was also accompanied by charges that the project was a target of interference from outside parties who presumably wish to see the project fail. Initially came a claim from Mitch Breitweiser that he had been the victim of a blackmail attempt which appears to have been in relation to former YouTuber Late Night Comics who claimed to have compromising material he planned to release. As this was roughly a year ago and was not related to his production team, it was unclear why the topic was introduced by Mr. Brietweiser earlier this month before he unexpectedly deleted his Twitter account entirely.

But those events were just precursor to the building drama surrounding the Breitweiser’s as his The Futurists campaign continued. More  controversy was stirred up by artist Kelsey Shannon. While promoting the project on a live stream with a group known as WarCampaign, Mr. Shannon participated in the ridiculing of another comic artist. Edwin Boyette publicly objected and some began to question whether Mr. Shannon’s conduct and associations might prove problematic if brought to the attention of the large scale retailers through which Mr. Breitweiser intends to distribute.

This past Sunday, Ethan Van Sciver put forward a new conspiracy theory claiming on a livesteam that saboteurs were seeking to bring down the project in part by targeting colorist Kelsey Shannon. Mr. Van Sciver has said he intends to release the name of these conspirators at a later date. An anonymous source contacted me and related the names that Mr. Van Sciver intends to finger and claimed that this conspiracy theory is an attempt to bolster sales for The Futurists campaign. 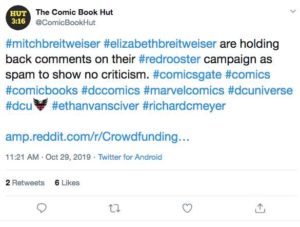 On Monday, Mitch Breitweiser and Kelsey Shannon did a “Free Kelsey” live stream seeking to clear Mr. Shannon’s name and paint a bright future for the project. Today, longtime anonymous Breitweiser critic, The Comic Book Hut tweeted that the Breitweiser’s had labeled the critical comments from their backers on the Red Rooster campaign page as spam, causing them to be removed.

Despite all of these attention getting controversies, The Futurists: Norah’s Saga still remains an under-performing project. The level of talent Mr. Brietweiser has assigned to the book potentially carry a significant price tag and a source familiar with the project told me that Mr. Breitweiser could potentially suffer a loss on the project if things don’t improve.

Where does that leave backers of Red Rooster? Potentially, Mr. Breitweiser can secure private funding to have both projects completed, but the uncertainty surrounding when and if backers will get their books remains a significant obstacle to The Futurists finding broad support. It also calls into question the main pillar remaining in support of #Comicsgate artists: that only artists selected by Ethan Van Sciver to receive the blessing of his platform can expect to succeed financially.