Back This Comic! Eisner-Winning Comic Creator Blacklisted for “Wrongthink” 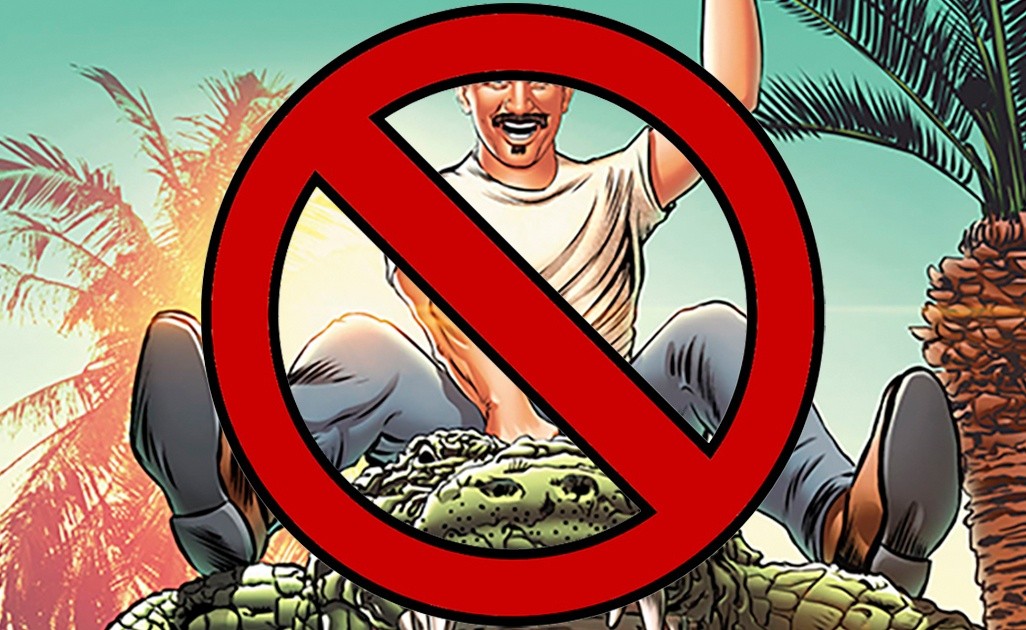 Reddit is one of the world’s largest forums and social news aggregators, and one of the largest discussion websites for pop culture. When the editor of Mike Baron and Todd Mulrooney’s latest crowdfunding comic project Florida Man, made an innocuous promotional post on the comicbooks subreddit, a website which boasts over 1.2 million subscribers, he was quickly and permanently banned – not for violating any of Reddit’s rules, but because the moderator looked up Braly and learned he was also an editor of Bleeding Fool. Since this website has given what could arguably be considered “fair coverage” of the consumer movement dubbed ComicsGate, this random anonymous moderator permanently banned the bleedingfool account and any mention of the crowdfunding project.

Here is the resulting exchange. 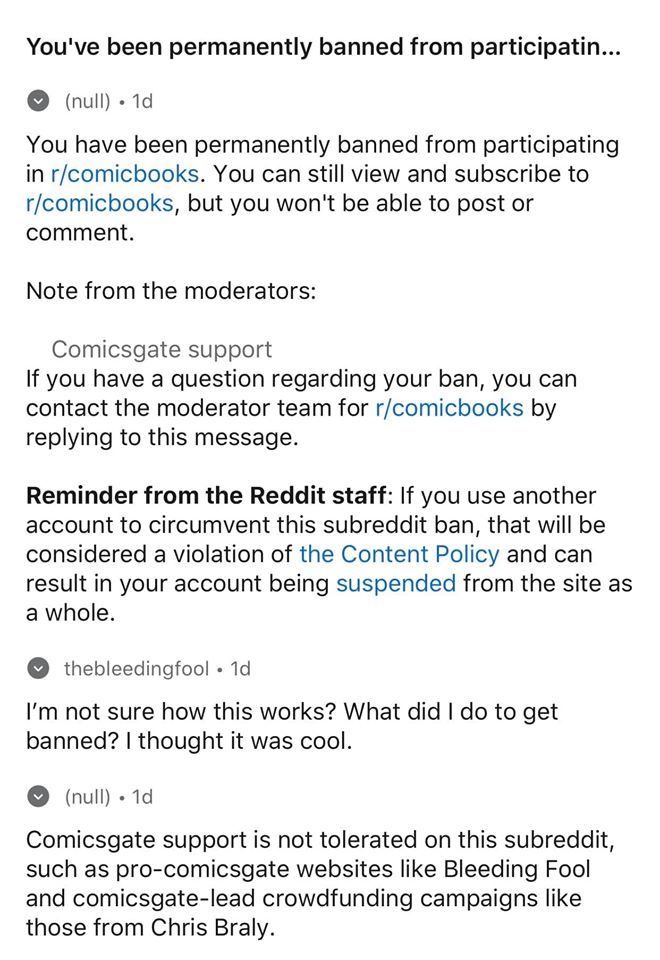 Mulrooney, the Florida Man artist, was subsequently also banned from the comicbooks subreddit for nothing more than sharing that post. This raises the same troublesome questions of what constitutes free speech in the online “public square.” Here is the post that Reddit determined should constitute a ban in order to keep the community “safe, civil, and true to their purpose”. 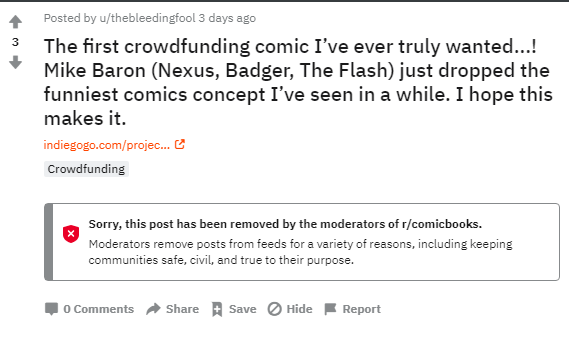 …censorship and de-platforming is an issue that we can all get behind. Mike [Baron] and I are ComicsGate adjacent. We just want to make a book that’s different, needed, and fun for everyone to read. We are years removed from a milkshake photo and ‘Yer Boi Zack’s’ comments. Don’t make the comics industry an unwelcoming place of bigotry, hate, shadow networking, and whisper groups that are gatekeeping good people like Mike Baron out. 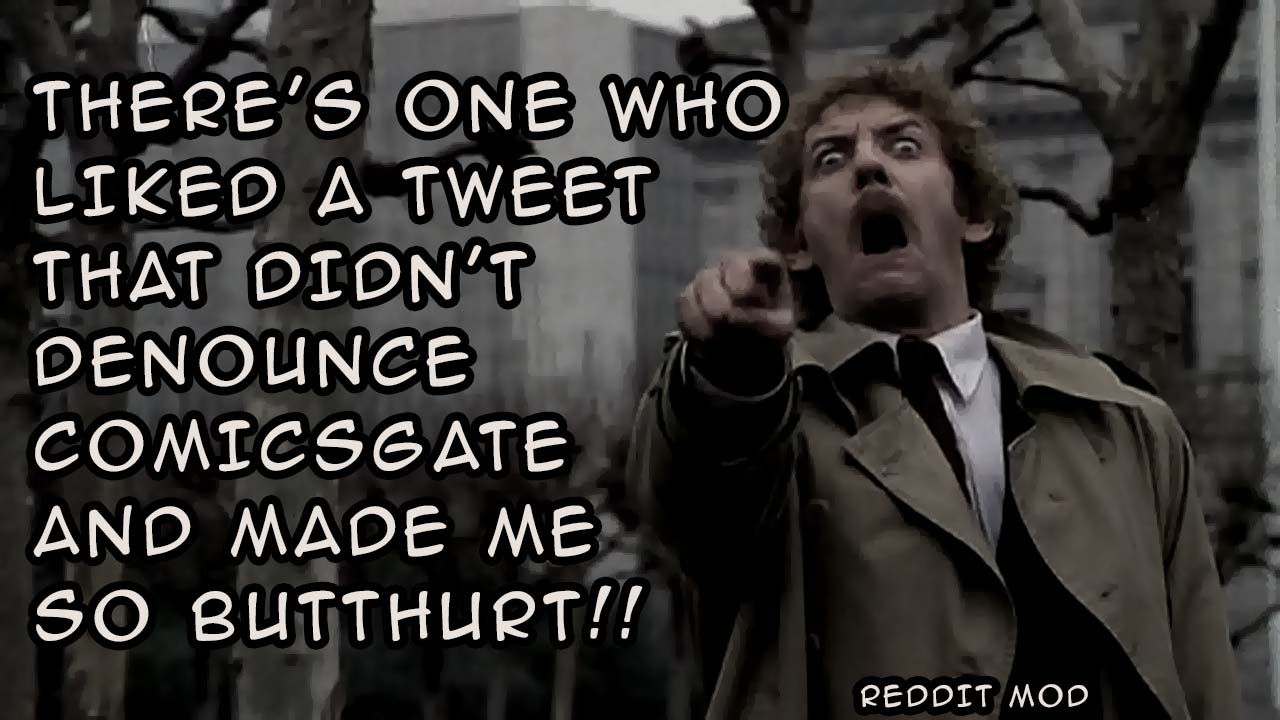 Here is the posted rules for this particular subreddit (emphasis mine).

The ComicBooks subreddit’s Rule 1: Be Civil

Racial, sexual, homophobic, or cultural slurs will result in a permanent ban. (Not Applicable) Do not disparage the differently abled or threaten or incite harm against other users, creators, or industry professionals (Not Applicable).  Any form of bigotry or support of hate groups (such as comicsgate) is not permitted (Not Applicable). While debate and differing views are encouraged (Not Actually True), please keep all discussion on-topic and do not resort to personal attacks (Not Followed by REDDIT) . As a general rule, don’t be a jerk (Not Followed by REDDIT) . 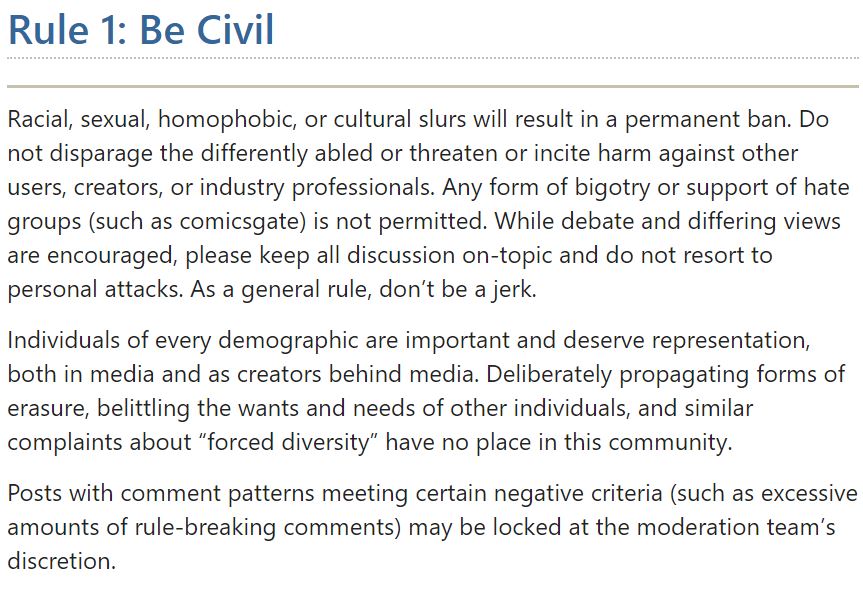 Questions: Is sharing a post about a crowdfunding project a form of bigotry? Is comicsgate really a “hate group”? Can moderators ban an account that represents 50+ contributors to an online journal? Does Mike Baron not deserve representation? Did they deliberately propagate a form of “erasure” or his project? Who is the arbiter of these judgement?

Bounding Into Comics had the following to add from their reporting on the incident:

The ComicBooks subreddit also appears to have an approved source of websites for comic book news.

Are you noticing a pattern here? Contributor and comic book reviewer Captain Frugal had this to say about the incident, and noted the audacious hypocrisy of their deplatforming of Mike Baron’s comic.

I hope Reddit users will share the project without any regards to being banned. I’m going to. I’m going to back this project as well. We’ve got to do all we can to push back on these ideological fascists! It’s a funny book for crying out loud!!