In a follow-up to a shocking story first broken by comic and geek culture news outlet Bounding Into Comics, Lilith Frammington’s groundbreaking petition has been removed by Change.org over drumphed-up accusations of bullying. Lilith reached out to me for an exclusive interview. She said:

“This petition was between me and Alexandria Ocasio-Cortez. But, once again, straight white men felt threatened by a powerful woman’s voice being heard, and by a woman flexing her newly earned influence within the U.S. government. So this bully, Richard C. Meyer, is ridiculously being labelled ‘a victim’, when in fact he’s the one who started this by talking so forcefully about comic books. And now it’s women and minorities who are supposedly the ones bullying him? Bullying is privilege plus power, so a woman can’t be a bully inside a system of patriarchy.”

The petition in question had asked Alexandria Ocasio-Cortez to revoke Richard C. Meyer’s Social Security Number, to prevent him from further harassing anyone on Youtube and being able to monetize his hatred. He is known for ruthlessly criticizing the comic books published by multi-billion-dollar corporations. According to Frammington, women and People of Color (POC) will never be safe as long as our society enables his brand of racism by providing employment and food to “white nationalist Nazis”.

“Since all white people have inherited racism and white privilege, they have also inherited the label of Nazis. Politicians have paid lip-service to the goal of making whites a minority in America within the next 50 years, but they haven’t done enough to take power away from white males. If we can make them undocumented and unemployable, they’ll eventually go away.”

Change.org has not made further comment, after the email they sent to Lilith Frammington. Bleeding Fool has the exclusive screen capture of the message, taken directly from Lilith’s phone, as shown below. 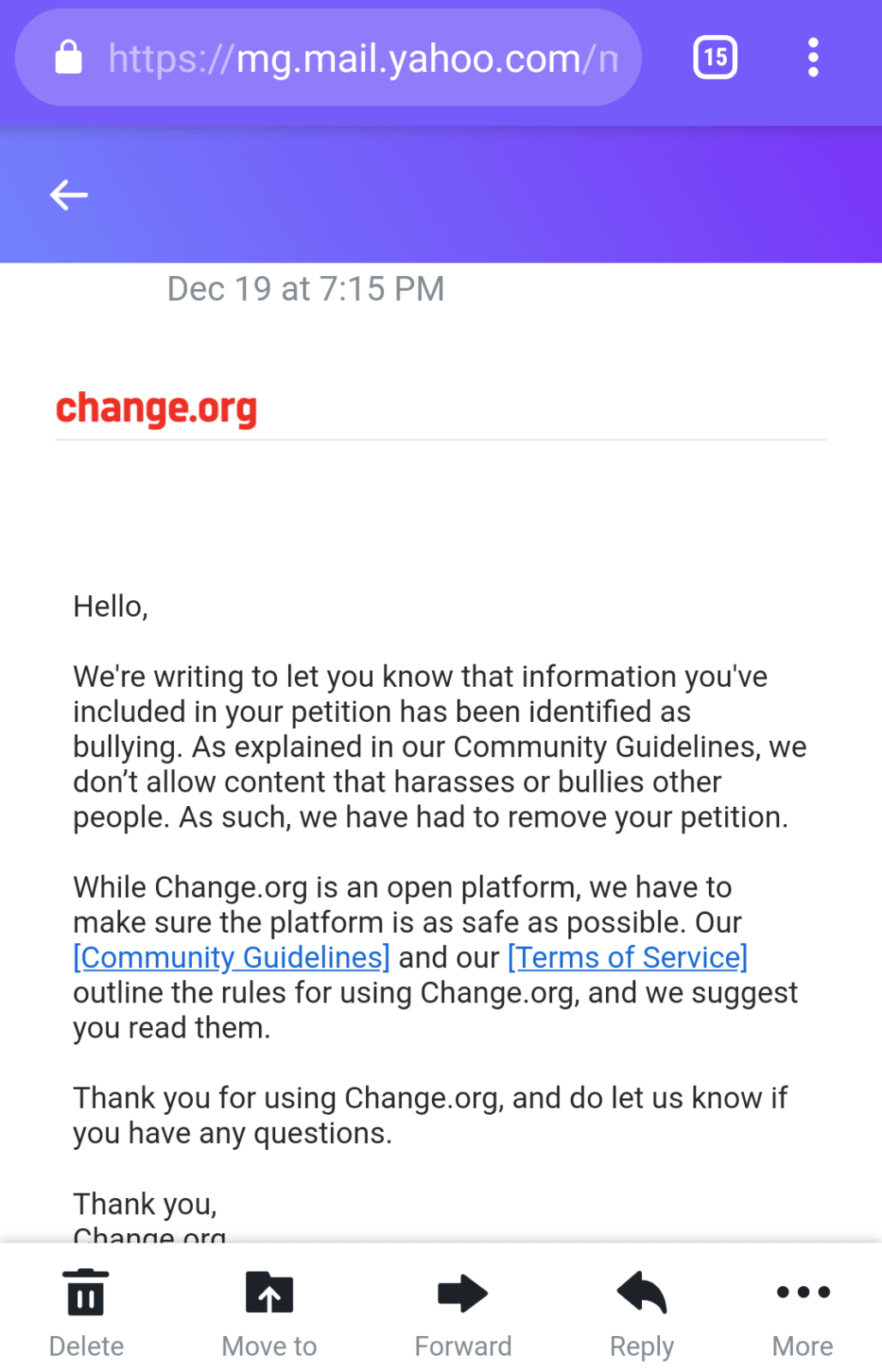 Here is the text of the petition, as it appeared before it was removed by the patriarchy:

There is currently a Youtube channel called Diversity & Comics. The person who runs this channel calls himself Zack to be anonymous, but we found out his real name and location. His name is Richard C Meyer, and we want to stop him from saying the things he says on Youtube about comic books. But even if his channel is taken down, he will still be able to get jobs and earn money in other ways. This petition can help change that.

If the United States government revokes his Social Security Number, he will not be able to have bank accounts or jobs. His SSN could be given to a marginalized person in need, like a young Hispanic man or a female of Uzbeki Muslim heritage. Until our society progresses to have a more comprehensive social credit score system, the Social Security Number is our best way of controlling who is allowed to participate in daily life. No one is allowed to buy or sell without it.

Please help by signing this petition and allowing us to affect real change in the world – it’s almost 2019. It’s not 2016 anymore, so people shouldn’t be allowed to keep doing the same things.”

An archived copy of the petition can be found at this link: Petition to Revoke Richard C Meyer’s Social Security Number

“Women are the nails that hold this society together, and therefore everything else in society is a hammer of violence used on women. They drive us down into our proper place, to protect the structures built from men’s wood.”