What’s Up With the New Vertigo Comics & Their Hiring of Zoë Quinn?

|
*Be sure to check out the video at the end of this article for some insider rumblings.

Before getting to the title of this article, a bit of a primer may be in order. If you’ve never hear of DC Vertigo, it was an imprint of DC Comics created in 1993 to publish stories with more graphic or adult content that could not fit within the restrictions of the Comics Code Authority, thus allowing more creative freedom than DC’s main imprint. These comics were free to contain explicit violence, substance and drug abuse, sexuality, nudity, profanity, and other controversial subjects, similar to the content of R-rated films.

Although its initial publications were primarily in the horror and fantasy genres, it also published works dealing with crime, social commentary, speculative fiction, biography, and other genres. Originally publishing a mix of company- and creator-owned work, its current focus is on the latter. Many notable Vertigo series won the comics industry’s Eisner Award, including Sandman, Preacher, 100 Bullets, Y: The Last Man and Fables. Several of its books have been adapted to film and television including Constantine, A History of Violence, Stardust, and V for Vendetta, iZombie, Lucifer, and Preacher.

2018 marks the 25 year anniversary of Vertigo’s creation, and DC recently announced the return of the beloved Vertigo line with a brand new set of socially aware comic books. In a plan to make Vertigo more topical, this relaunch will focus on “bold voices across various entertainment backgrounds”, voices like the controversial game developer Zoë Quinn and atheist writer Mark Russell.

We’re returning to our roots by spotlighting the most exciting new voices in comics, as well as bringing new voices to comics. From the corners of television, games, music, activism, podcasting, comics and more, all of our creators are passionate and have something to say. These sophisticated stories have amazing new characters and vast worlds to explore. That’s what it has always been about for me – new stories, new voices, new possibilities. We’re creating a new generation of DC Vertigo classics for readers of all genres.

Starting in September, Vertigo will launch a new series every month and each series will be offering commentary on a myriad of current social issues in what appears to be a very “on the nose” approach. 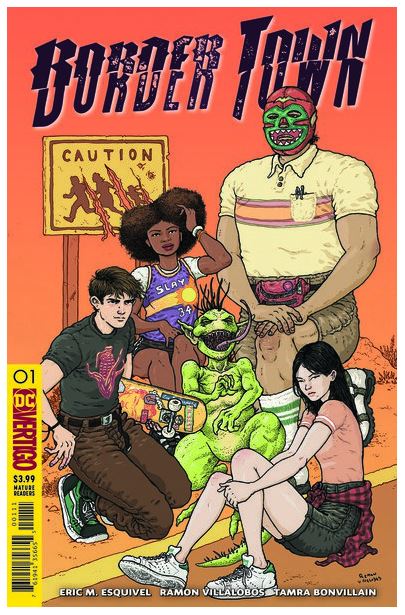 So there you have it. The all-new line-up of “socially relevant, high-concept, inventive stories appealing to readers of all genres” according to DC. Which ones appeal to you? Is it the one about the “rag tag team of sex-workers” (Safe Sex) or maybe the snarky take on the central icon of the Christian faith with a dash of profanity and irreverence (Second Coming)? Or better yet, how about a book by the same woman who kicked off the entire GamerGate debacle but has never actually written a comic book (Goddess Mode)?

Jeremy Hamby of The Quartering notes that “DC Comics ignored the thousands of talented artists when bringing on this set of creators, ignoring people who are actually fans of comics and instead hired one of the most cancerous persons on the planet“:

Jeremy also seems to be convinced that Ms. Quinn’s hiring announcement is being used as a smoke screen to cover-up for the recent firing of DC Comics President Diane Nelson to prevent the social justice warriors from coming down on DC, and will instead be praising DC for giving creators like Zoe Quinn her own book.

What do you think of the new Vertigo line-up announcements? Sound off in the comments!