What is Brie Larson’s ‘Endgame’?

As Marvel’s least favorite movie star continues on her path to killing a franchise, Ms. Larson recently had an interview where she continues to promote her personal agenda. I just read the following article on Vanity Fair today where she says the following: 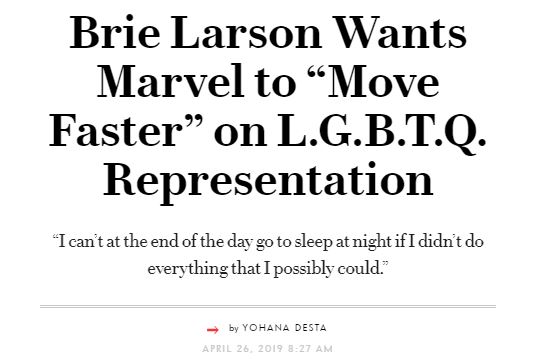 Marvel may be slow with firsts, but it’s finally making strides. Black Panther marked the cinematic universe’s first film with a mostly black cast; Captain Marvel was the first stand-alone film for a female superhero, starring Brie Larson. Now, Larson would like Marvel brass to broaden its inclusionary palette at a faster clip—including, but not limited to, having a superhero who’s part of the L.G.B.T.Q.I.A. community.

In an interview with Variety’s Marc Malkin, Larson said it broke her heart to hear the interviewer say that when he was growing up, he did not think there would ever be a gay superhero on the big screen.

“That breaks my heart to hear that, because there’s no reason,” Larson replied. “I don’t understand how you could think that a certain type of person isn’t allowed to be a superhero. So to me it’s like, we gotta move faster. But I’m always wanting to move faster with this stuff.”

Larson has openly advocated for more inclusion in the film industry at large in the last few years, calling out the lack of diversity in film criticism and speaking freely about how she deals with the industry’s egregious wage gap. She continued in the interview, saying that just being Captain Marvel wasn’t enough in terms of representation. “It wasn’t enough for me to just look strong on a poster; it needed to extend further than that,” she said. “I feel like I can’t at the end of the day go to sleep at night if I didn’t do everything that I possibly could.”

Marvel producer Victoria Alonso has previously said the “world is ready” for a gay superhero. “I’m so passionate about this, I’ve got to tell you,” she told Variety. “Our entire success is based on people that are incredibly different. Why wouldn’t we? Why would we only want to be recognized by only one type of person? Our audience is global, is diverse, is inclusive. If we don’t do it that way for them, we will fail.”

Brie Larson seems to be quickly becoming what comic fans refer to as the “destroyer of worlds” as she just can’t seem to get down from her identity politics soap box. In this video, I speculate on her goals, the shenanigans, what’s actually going on, and why she appears to have no understanding about how the world works around her.

And learn how to get some of my free Alterna Comics!!