How does a new superhero team made up of a goth kid, an overweight foster kid with a magical backback, an internet kid jacked into the world wide web and obsessed with memes, and a pair of twins named Snowflake (a non-binary, genderless girl with blue hair) and Safespace (a pink haired, earring wearing jock in a pink onesie)? Apparently that’s the line-up for Marvel Comics latest revival of the 90’s hit superteam, the New Warriors. Marvel writer Daniel Kibblesmith introduced the new team in the following video yesterday, and laid out the details of the upcoming series.

In the video above, Daniel Kibblesmith states:

“I want the people who read our New Warriors to feel all of the excitement they felt if they read the ’90s one. We want it to have big colorful characters, personality clashes, romance, a diverse cast, which is something the New Warriors titles have always strived to make a priority. Every New Warriors comic has always felt like a reflection of the year that it came out. And I don’t think we are worried about being dated. I think we are way more interested in being now.”

So if you read New Warriors in the 90’s, then you’re a fan and you’re obviously a reader who is nearly thirty years of age, or close to it. Does Marvel Comics think this is the kind of material, the sort of line-up that will truly appeal to fans of the original run? Was diversity also a big priority for readers of the 90’s comic?  This sounds more like “woke comic, current year” created by proud social justice warriors (SJW) with a personal agenda who had no real interest in the original title, or superhero comics in general. They just want to get their identity politics on the printed page.

Marvel is promoting this as a revival of the old team. This is volume 6 of the title (not counting a NOW initiative). Early press is using the following slug “The classic New Warriors team reunites to mentor a new generation of heroes this April!” so clearly they want fondness for the original title to draw readers in, but it’s going to be a BIG bait and switch. I hope comic retailers are paying attention when they order this.

Let’s take a look at this line-up. 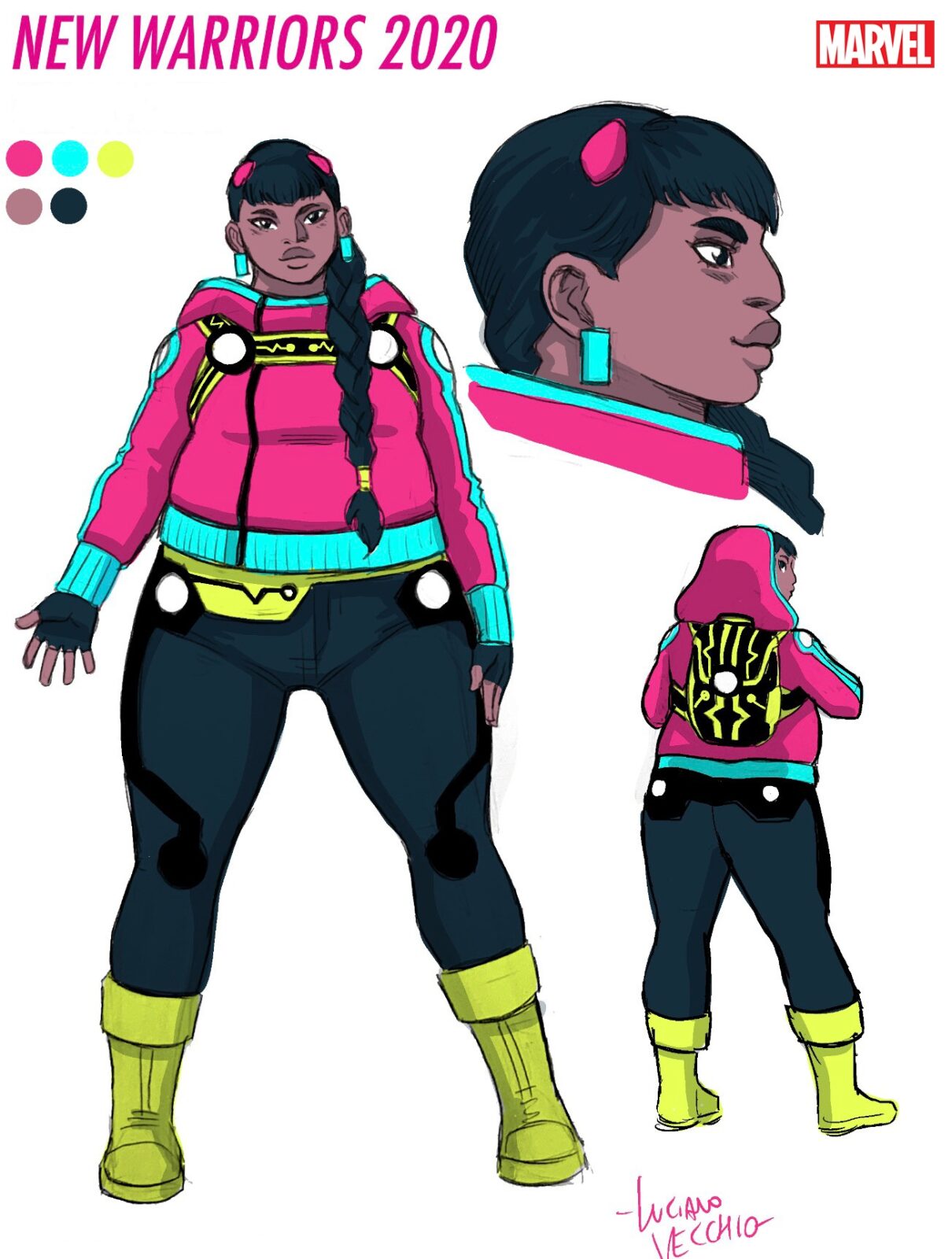 TRAILBLAZER: A regular kid scooped up into the world of teenage Super Heroing. Her “magic backpack” is actually a pocket dimension with seemingly infinite space, from which she can pull out useful or random objects—it’s not always under her control. She claims to get her power from god, but “not the god you’re thinking of.”

“Trailblazer wants to help people, but she doesn’t think of herself as a Super Hero (yet!),” said Kibblesmith. “The Marvel Universe is a reflection of our own, and when a new law gets put into place, it affects people in unforeseen ways.” 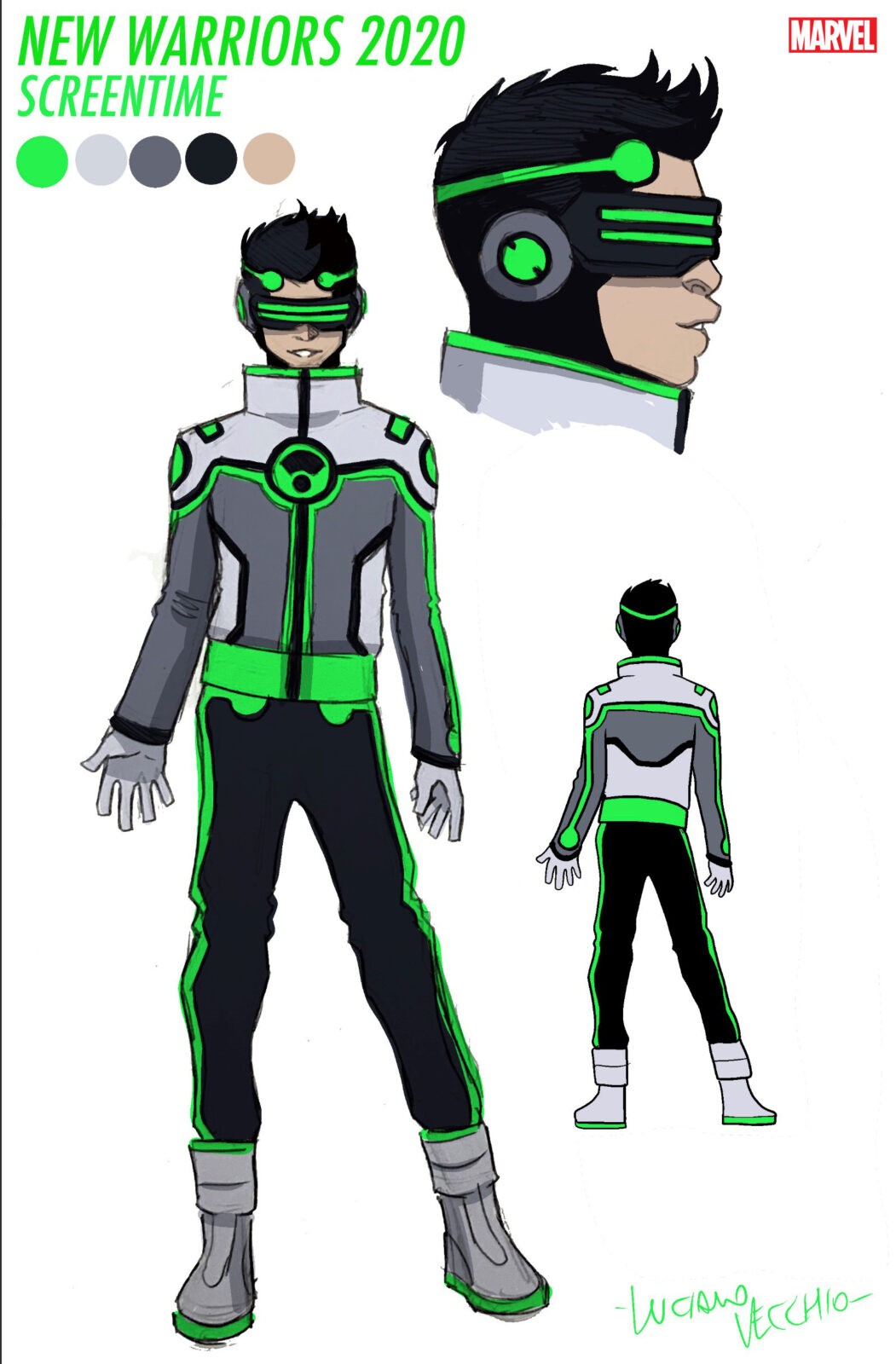 SCREENTIME: A Meme-Obsessed super teen whose brain became connected to the internet after becoming exposed to his grandfather’s “experimental internet gas.” Now he can see augmented reality and real-time maps, and can instantly Google any fact. Does this make him effectively a genius? He sure acts like it does.

“The word ’screen time’ is only ever used in a sort of restrictive sense, and because we’re doing a story about teenage rebels, a lot of the names are about teens fighting against labels that are put on them. So with Screentime, we liked the idea that he has infinite screen time.” 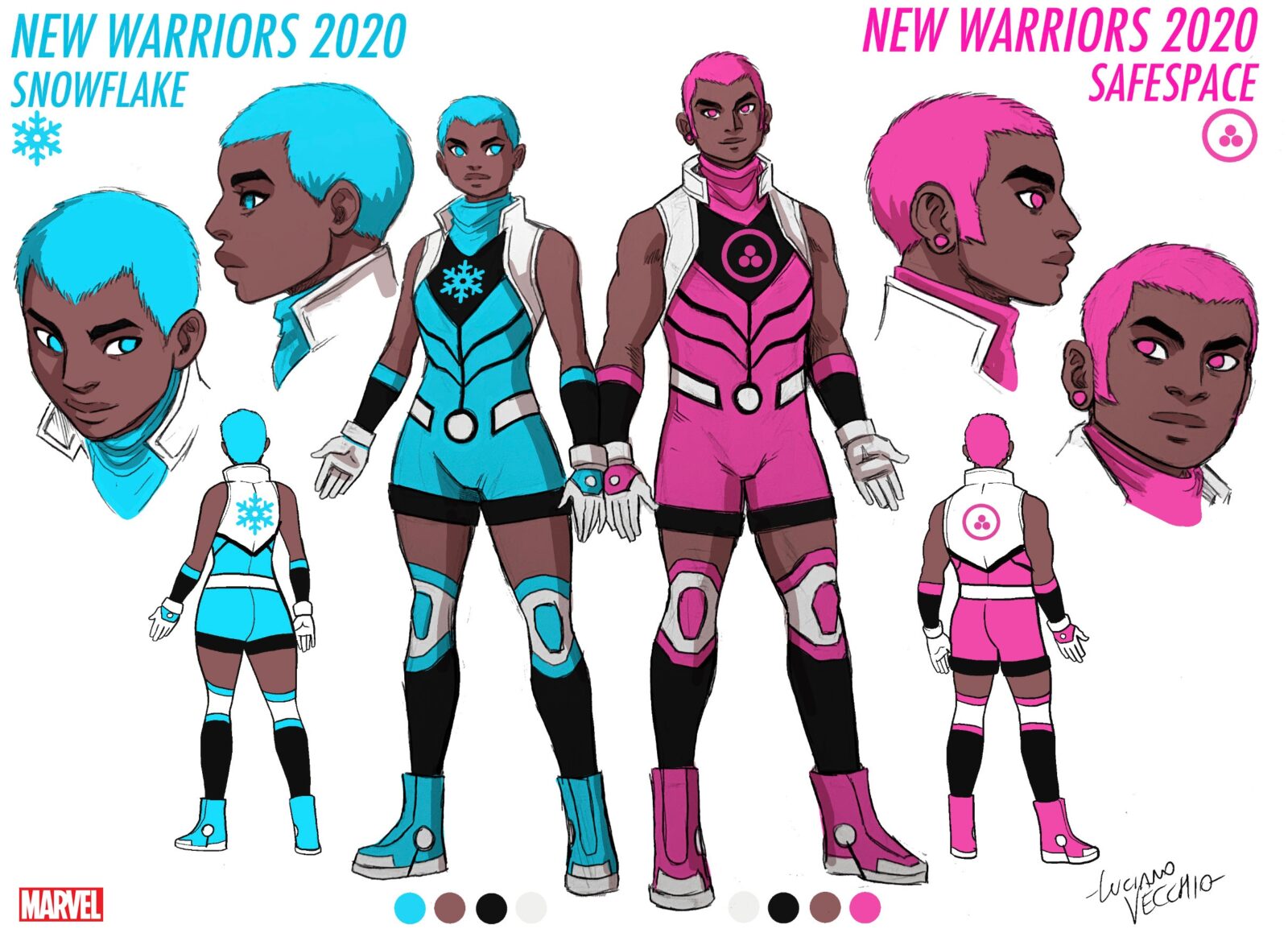 SNOWFLAKE AND SAFESPACE: As psychic twins, Snowflake, a cryokinetic, can materialize snowflake-shaped shuriken projectiles for throwing. Safespace can materialize pink forcefields, but he can’t inhabit them himself, the reflex only works if he’s protecting others. They’re hyper aware of modern culture and optics, and they see their Super Heroics as “a post-ironic meditation on using violence to combat bullying.”

“[Snowflake and Safespace] are very similar to Screentime; it’s this idea that these are terms that get thrown around on the internet that they don’t see as derogatory. [They] take those words and kind of wear them as badges of honor…Snowflake is the person who has the more offensive power, and Safespace is the person who has the more defensive power. The idea is that they would mirror each other and complement each other.” 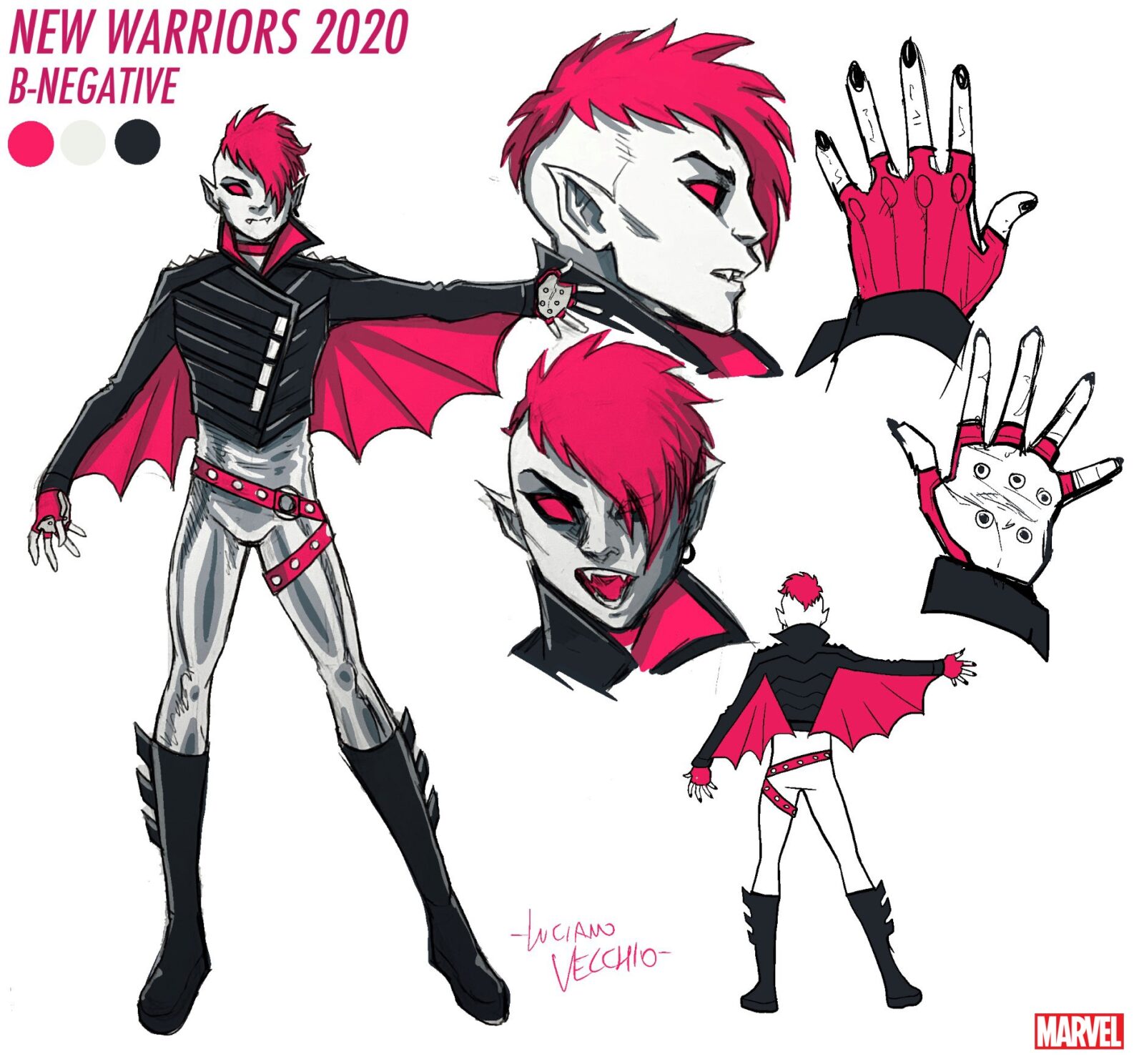 B-NEGATIVE: A teen “living vampire” exposed to Michael Morbius’s blood as a child in a rogue, but life-saving medical procedure. He still ages like a regular kid, but has all the abilities of Morbius. He’s also obsessed with all the music and attitude of a “classic” long-past decades like the ’90s, and the ’00s. “The world is a vampire…and so am I.”

“B-Negative is the goth kid. When he was a baby he got a rogue lifesaving blood transfusion, we assume, from Michael Morbius. And now he has a very similar look, and very similar vampire powers…B-Negative ages like a regular person (or does he?) and he definitely drinks blood (or does he?), but designer/artist Luciano Vecchio took brilliant inspiration from the ’90s Spider-Man cartoon and gave B-Negative the ‘leech suckers’ that the animated version of Morbius had on his palms.”

This series has “FAIL” written all over it, and I can only hope that this title is actually a parody or that there is some twist similar to issue #1 of Thunderbolts back in the late 90’s. However, I don’t think the House of Ideas is all that clever anymore. but remember, this is the same publisher that greenlit ‘America Chavez’ by Gabby Rivera. Clearly C.B. Cebulski, the current Editor in Chief isn’t concerned about comic shops being able to sell their comics. As Youtube personality YellowFlash pointed out in one of his recent videos, the EIC of Marvel seems more concerned about saving his favorite restaurants during the coronavirus scare than saving local comic shops by promoting them, putting out great titles instead of another event book, or simply offering returnability to stores – something Image Comics has recently decided to do. 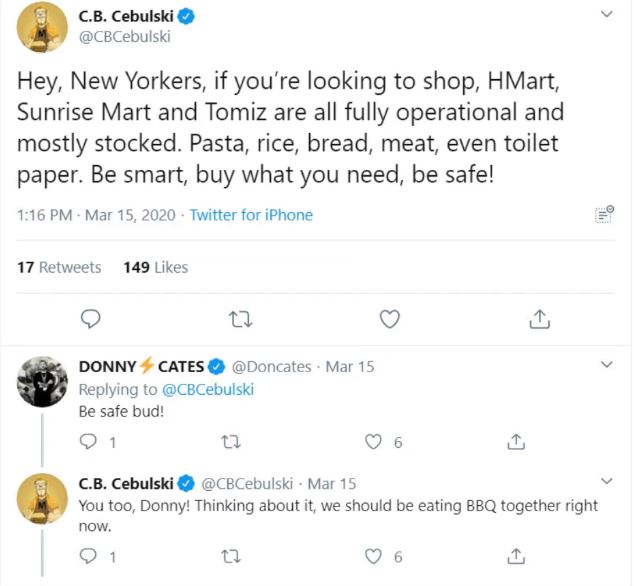 Even while outlets like TwoMorrows Publishing and Devil’s Due Comics are offering readers some free digital reading during the quarantine era, Cebulski spends his time talking about BBQ and eating. He will truly usher in the end of Marvel, or at the very least, a return of the “Dork Age” by letting the editors green light ‘woke’ trash like this. In many ways, he has been a disappointing failure. Is this new series being done out of spite? Is this a parody of readers themselves? Are they trolling us? Do they care? 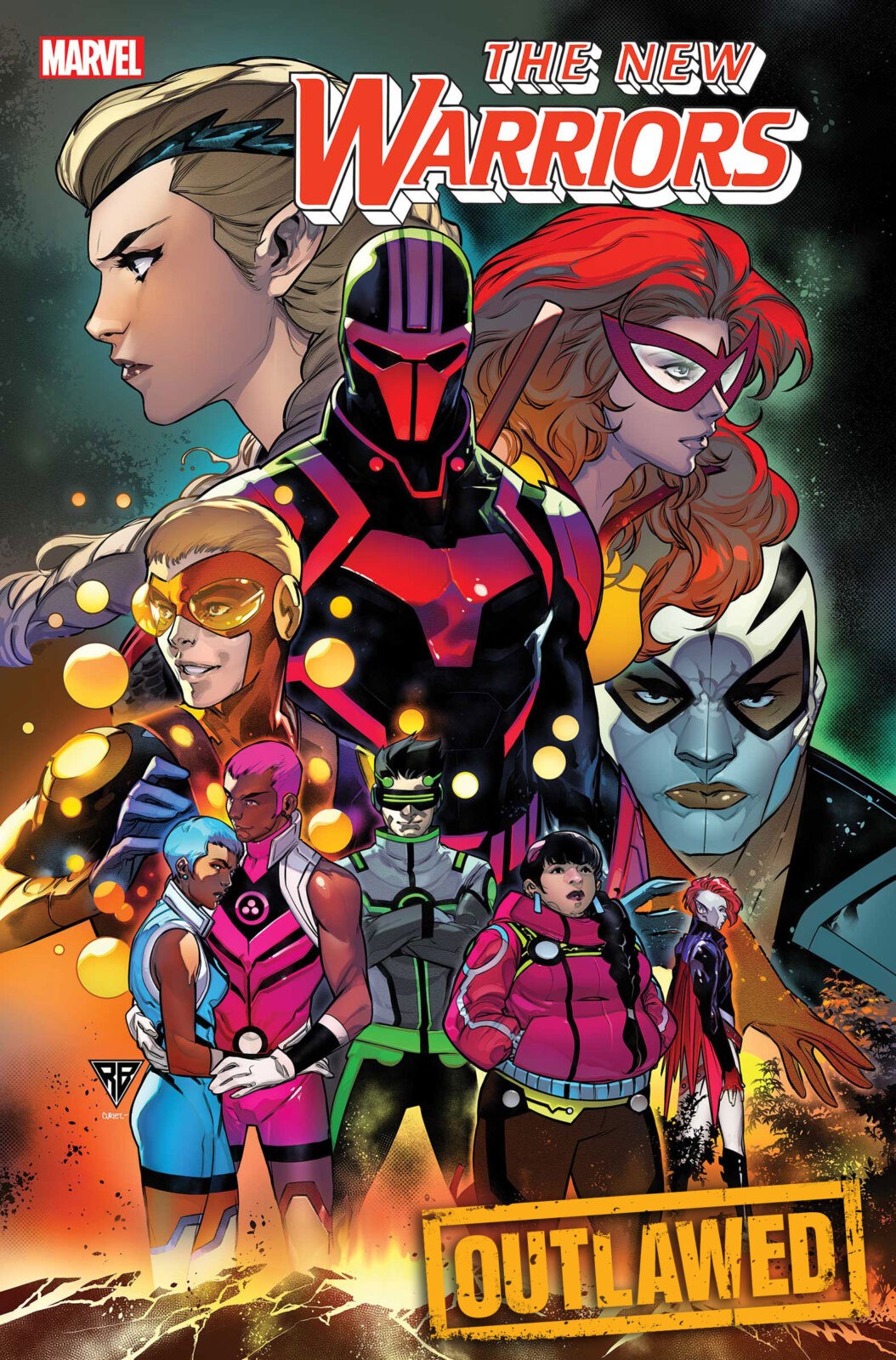 The first issue will have 4 variant covers in addition to the main cover by RB Silva. The first variant is by interior artist Luciano Vecchio. Only Silva and Vecchio’s covers were provided in the April solicitations. They were previously revealed in the original announcement, however these updated versions use the original New Warriors logo (thanks to Jason Roth for catching that detail!). The second variant will be by Mark Bagley, original artist of New Warriors vol. 1. This will be his return to drawing the team he defined, following his 1-page New Warriors story from Marvel Comics #1001. The third variant cover will be a Hidden Gem variant by an artist to be announced at a later date. Hidden Gems are generally unpublished or rarely seen art repurposed as a cover. So we might see some rare New Warriors art. And then the fourth variant cover is Shelvey’s Marvel Zombies cover.

So fewer variants than normal. That’s a relief. Still not interested.