Top 5 “What If…?” Marvel Comics That Destroy the Disney+ Series

Some of Hube’s Favorite ‘What If?’ Comics That You Should Definitely Check out

If the apparent ho-hum nature of Marvel/Disney Plus’s “What If …?” has got you down, especially enough to not bother tuning in, there are a plethora of excellent four-color versions of the series upon which to feast your eyes. Let me run down five that I remember fondly that you can probably pick up at your local comic shop.

What if…? was a comic book anthology series published by Marvel whose stories explored how the Marvel Universe might have unfolded if key moments in its comics history hadn’t occurred precisely as they did in mainstream continuity. The first series of What If?, which ran from 1977 to 1984 features some of the best alternate reality tales in Marvel Comics lore. And one of the earliest entries, #3, is a prime example:

Diverting from the Marvel Universe proper’s (Earth-616) Avengers #2, the fledgling Earth’s Mightiest decide to break up shortly after the Hulk quits the team. Tony Stark is miffed at this, and after Jade Jaws and the Sub-Mariner challenge the (now-disbanded) Avengers to a scrap, Stark creates suits of armor for Giant Man, the Wasp and Rick Jones in hopes of taking them on.

The trio balk at the challenge — initially — because they can’t operate Stark’s suits properly. However, when a ticked off Iron Man jets off to do battle against the Jade Giant and Subby singlehandedly, Hank Pym and crew eventually show up in their armor …but is it in the proverbial nick?

Why it’s awesome: The script by Jim Shooter with art by Gil Kane and an early “Armor Wars” feel.

In 1989, Marvel Comics revived its alternate universe anthology series, What If?, for a second run of stories. Replicating the formula of its predecessor, What If? Volume 2 told imaginative tales which put a spin on established Marvel continuity. Volume 2. ran for a period of nine years, ending in 1998. During its time on comic book shelves, the comic amassed 114 regular editions, as well as one-off special, starring none other than Iron Man.

Speaking of Shellhead, one of my favorites from What If? volume 2 is #64. It’s an incredible gem: “What If Iron Man Sold Out?” This tale diverges from Iron Man’s earliest days; upon returning from Vietnam and keeping the use of Iron Man technology solely for himself and his company, Tony Stark decides to offer his marvelous secrets to …the United States government!

But this turns out to be a bad idea. In the name “competition” and “free trade,” the U.S. eventually loses control of Stark tech and a new arms race ensues across the globe. Armored villains like the Beetle become greatly enhanced, while non-armored super-beings (villains and heroes alike) such as Spider-Man and Daredevil largely disappear from public life.

Stark himself manages to stay one step ahead of everyone in the armor arms race, and ultimately creates an ultimate, and massive, Iron Man suit which is impervious even to Magneto (who has cobbled together various mutants to destroy armored entities who threaten the very survival of homo superior). Stark threatens to blanket the Earth with a massive EMP (electromagnetic pulse) which not only will immediately shut down all armored heroes and villains, but throw the planet back into the Stone Age.

Why it’s awesome: Incredible premise by writer Simon Furman is handled to near-perfection as this is an all-too believable alternate reality …politically, that is.

Another Iron Man gem is that volume 1 special issue (June 1988) I mentioned, “What If Iron Man Had Been a Traitor?” This diverts just a bit earlier in Iron Man’s history than the entry above: Wong Chu’s minions burst into the room before Stark can get the Iron Man suit fully operational. Chen Lu, known to Earth-616 as the Radioactive Man, devises a means to stop Stark’s heart from beating via satellite control, meaning anywhere on Earth. If Stark doesn’t do exactly what Lu and his superiors want, he dies.

Lu and Stark’s machinations almost lead to Nick Fury’s death, but if we know the man behind ‘ol Shellhead as we do, he’ll figure a way out of his predicament! Various panels show Stark seemingly involved in meditation, letting out slow, long chants in the process; however, in reality Tony is recording a message for help on “ultra-slow recording” tape. Reed Richards eventually gets the tape and helps Stark get out from under Lu’s control.

Why it’s awesome: You might ask yourself early in the tale “Why would Stark not sacrifice himself in the name of telling Chen Lu to go f*** himself??” Alas, he had a plan the whole time … One downside: Steve Ditko’s pencils don’t do much for an otherwise great issue.

Also in volume 2 is the superb two-parter featuring the Vision (#19). The first story diverts from Avengers #254+ where the Android Avenger merged with the Titan computer ISAAC … and then wanted to take over the planet.

The Avengers have failed to convince the Vision to relinquish control of the world’s computers, and he proceeds to usher in a Golden Age for humanity. By the 22nd century, the now-Ultra-Vision oversees the Cosmic Avengers as they defend Earth’s interests. The Kree and the Skrulls, wary of Earth’s rapid rise to prominence in the galaxy, devise a plan to crash Halley’s Comet into our blue orb, but the future Avengers — Jhen the Gammazon (a clone of the She-Hulk), Tachyon Torch, Commander America, Iron Droid, Starhawk and Thor) defeat the evil interstellar foes.

These Avengers would later have their own issue of What If? — volume 2 #36 — a continuation of #19’s first story where they battle the omniscient Korvac (worth checking out, especially for continuity buffs).

The second story in vol. 2 #19 opens with New York City being nuked by Genosha following the Vision’s world takeover. With most of the planet’s superheroes now dead, Vision goes the fascist authoritarian route: He allies with bad guys like the Mad Thinker, Doctor Doom and the Supreme Hydra to get the world chaos under control.

Two hundred years later, “the trains run on time” and Earth is an interstellar threat. The Kree and Skrulls, this time joined by the Badoon, stand in Earth’s way, but Vizh is ready for them. He uses a computer virus to take over the Kree Supreme Intelligence, and hooks the Skrulls on a drug that, if they stop taking it, will kill them.

Why it’s awesome: If you’re a Vision fan, this may be the best Android Avenger alternate reality tale of all.

A sentimental favorite of mine is from back in volume 1 issue #5, “What If Captain America Didn’t Vanish During World War Two?” Of course, there’s been quite a few years of continuity in which Bucky survived that fateful explosion (and he’s become a major player in the MCU), but when this ish came out (1977) the idea of Cap’s sidekick surviving pulled at the heart strings.

Cap and Bucky continue their exploits through the 1950s into the 1960s whereupon President Johnson offers the job of SHIELD director to Steve Rogers (Nick Fury was killed in action in Korea in this reality). Bucky, now going by “Buck,” assumes the role of Captain America with Rick Jones as his sidekick.

After an all-out battle with Hydra, which is led by Cap’s WW2 nemesis Zemo, Buck-Cap and Zemo are killed, and Buck’s girlfriend, Sharon Carter, blames Steve. As the original Cap outfit and shield are relegated to a museum after the battle, Steve Rogers ponders what could have been when … in walks Rick Jones donned in the red, white and blue to continue the legacy! 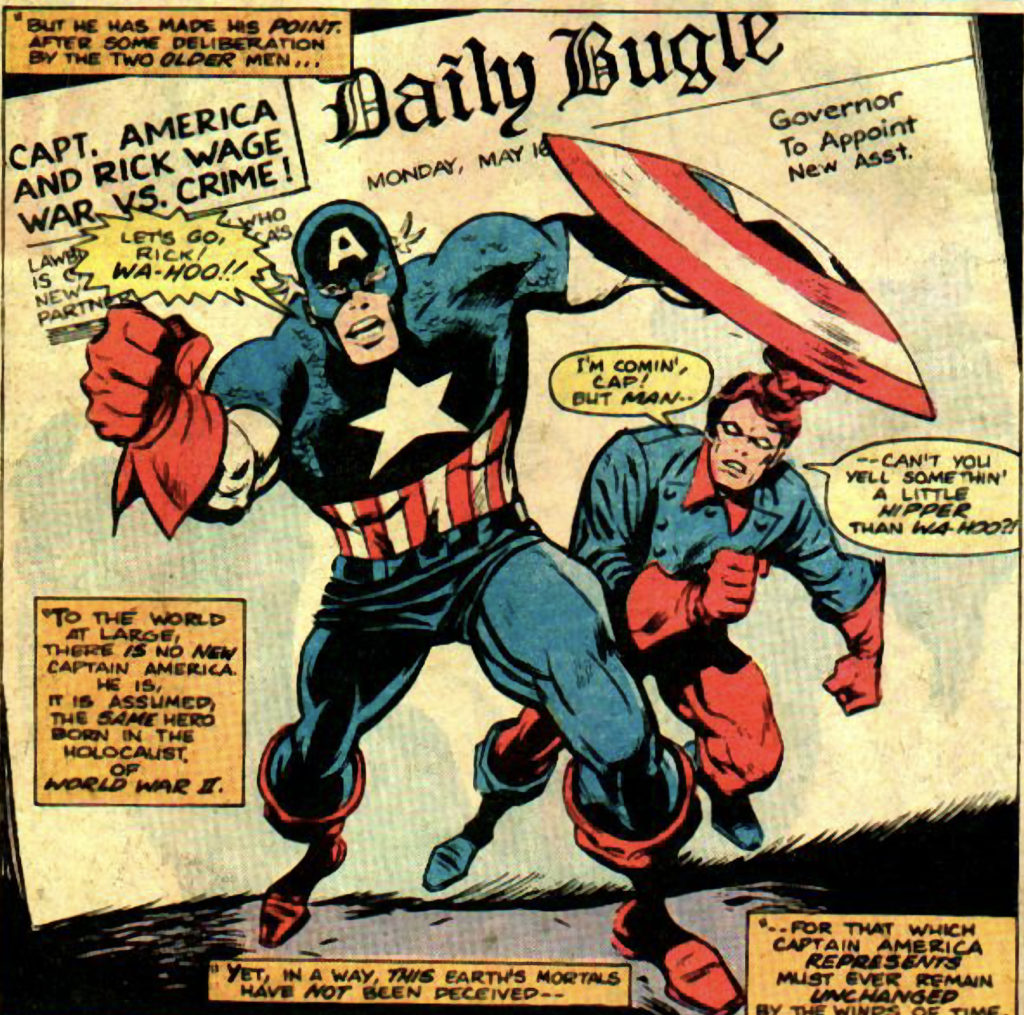 Why it’s awesome: As noted, if you’re old enough, the story by Roy Thomas and Don Glut will evoke some emotions. And George Tuska, my favorite Iron Man artist, really shines in the pencils department.

It’s been said before that the movie is never as good as the book, and I can assure you that the Disney series of Marvel’s What If…? will never live up to the creative highs of Marvel’s original comics. Hit your local comic shop and hit those back issue bins True Believers.