I think Marvel Comics has come a long way over the past year. They weren’t even producing five comics that I could recommend just 12 months ago. The publisher still has some “issues,” but they’ve course corrected somewhat on their most important properties. In fact, only one series in my Top 5 list (Venom) was around a year ago, and it had only just released issue number one. It was genuinely difficult narrowing it to five series and I had to leave a few quality books off the list such as; Savage Sword of Conan, Invaders, Uncanny X-Men and Guardians of the Galaxy to name but a few.

So with that said, let’s get into what I consider the best of the best stuff starting with number five at Marvel.

When Marvel relaunched The Amazing Spider-Man following issue 800 under Nick Spencer I was less than enthused. I hoped Chip Zdarsky would get a run on the flagship series after his terrific Spectacular Spider-Man. I’m glad I came around, Amazing Spider-Man is a great read. Spencer treats Peter Parker like a competent adult hero, a real issue these days (see also, Friendly Neighborhood Spider-Man.) The biggest drawback of the series is the rotating artist, which hurts series continuity.

Nick Spencer’s entire The Amazing Spider-Man series led to the current ‘Hunted’ story arc featuring the return of Kraven the Hunter. The story is filled with classic villains like Taskmaster, Rhino, Back Ant, Lizard, Vulture and my personal favorite Arcade. It’s a fun, action-packed series fans of the character will absolutely love. I understand readers who aren’t ready to forgive Spencer for his abhorrent behavior, but they’re missing out on one hell of a Spidey book. 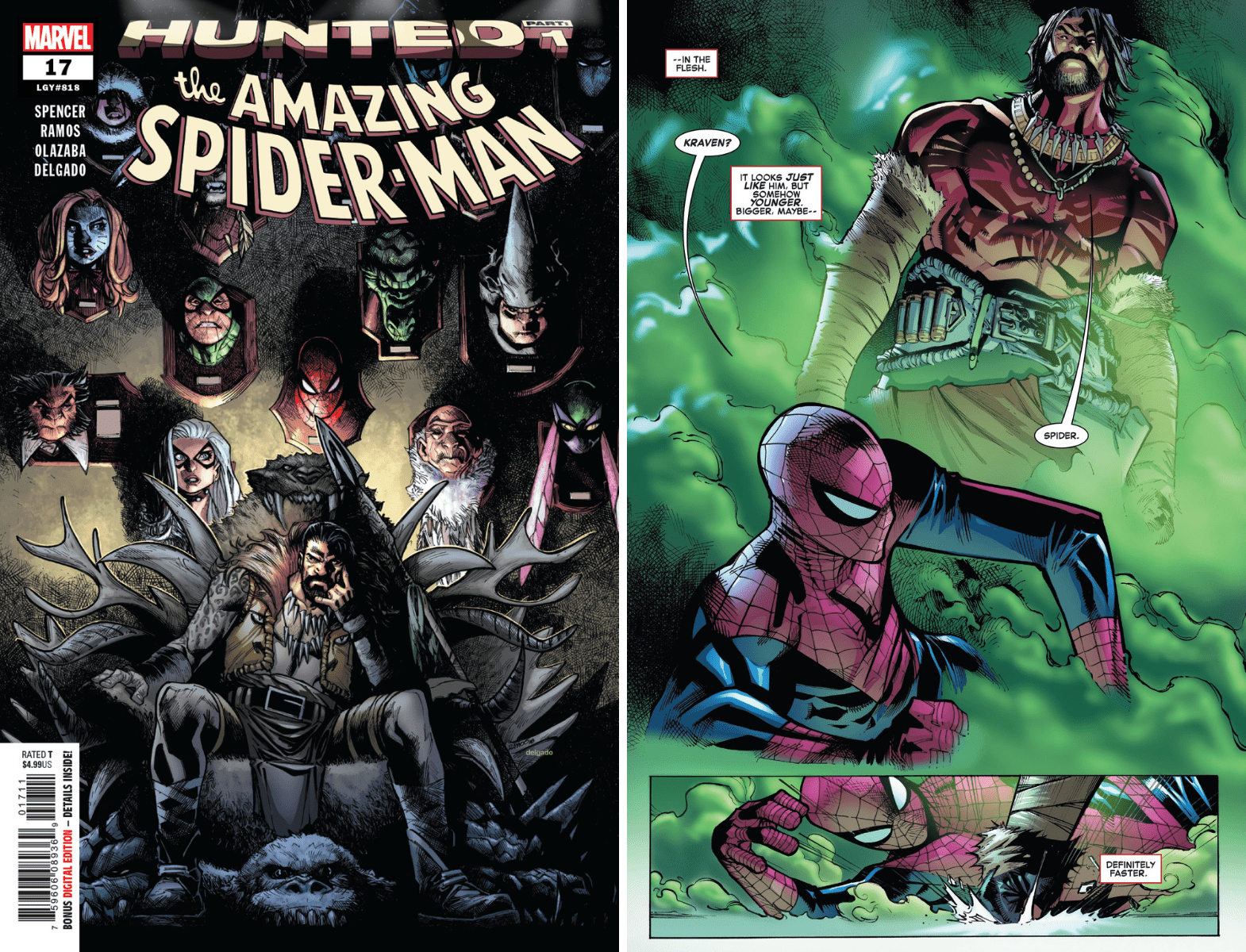 The rest of the series on the list have one primary artist and are better for it. Ryan Stegman leads the art team on my number four book.

Stegman’s amazing gothic style visuals fit the tone of writer Donny Cates’ Venom to a t. The McFarlane-inspired visuals are among the best in the industry and truly terrifying. Stegman fills his pages with amazing background and character details that are deeply engaging. Colorist Frank Martin layers the art perfectly and Stegman’s Venom pops out on the page.

Donny Cates and Ryan Stegman have added so many layers to the character in the past year. They’ve woven symbiote God Knull in to the character lore perfectly. Also hinting at a relationship between Knull and Carnage. Cates changed the nature of Eddie Brock and symbiote Venom’s relationship. Leading to the revelation that many of his past tragedies were untrue and he has a son. Eddie was recently separated from Venom and the symbiote is currently damaged. All this is moving the series to August’s Absolute Carnage event led by Cates. 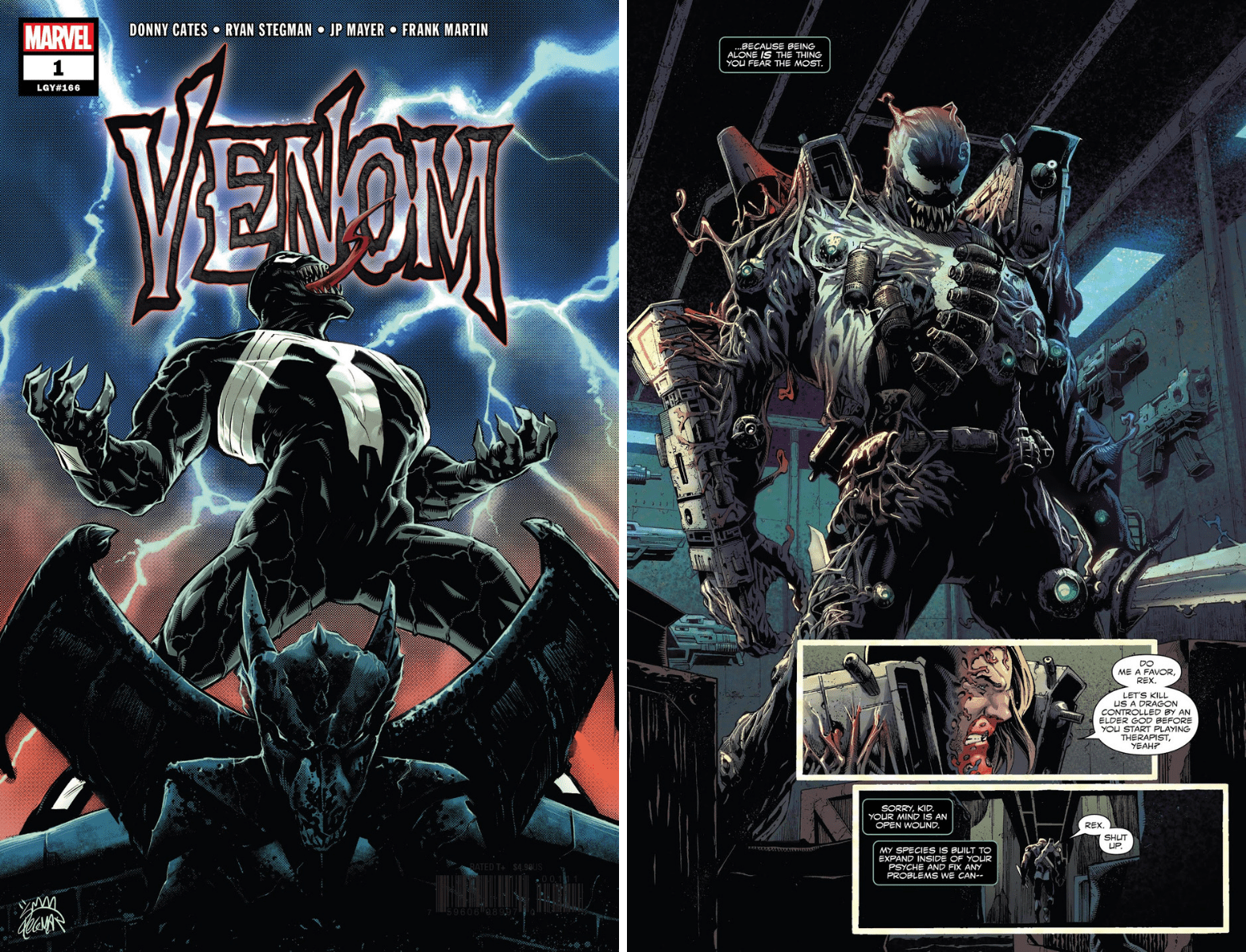 Spider-Man is easily the most popular character at Marvel Comics. Chip Zdarsky leads the highest rated miniseries on the list at number three.

Chip Zdarksy didn’t get the Amazing Spider-Man gig but Marvel did give him his own Spidey miniseries. Spider-Man Life Story is an extremely ambitious idea. Peter Parker ages in real-time through the decades. Zdarsky and artist Mark Bagley are executing it to perfection. Bagley is synonymous with Spidey and the art work on the series is spectacular. Seeing Peter age from teen to middle-aged hero on his second marriage in three books is surprisingly effective.

Spider-Man has such a rich, wide-ranging history it seems an impossible task to tell a decade’s worth of story 30 pages at a time. Zdarsky has proven more than up to the task. He’s intertwined Peter’s conflicts with the Osborne’s, Clone Saga, Secret Wars and Kraven’s Last Hunt. Life Story will probably read even better in trades. Spider-Man Life Story likely replaces Jeph Loeb and Time Sale’s Spiderman: Blue as the perfect character introduction for new readers. 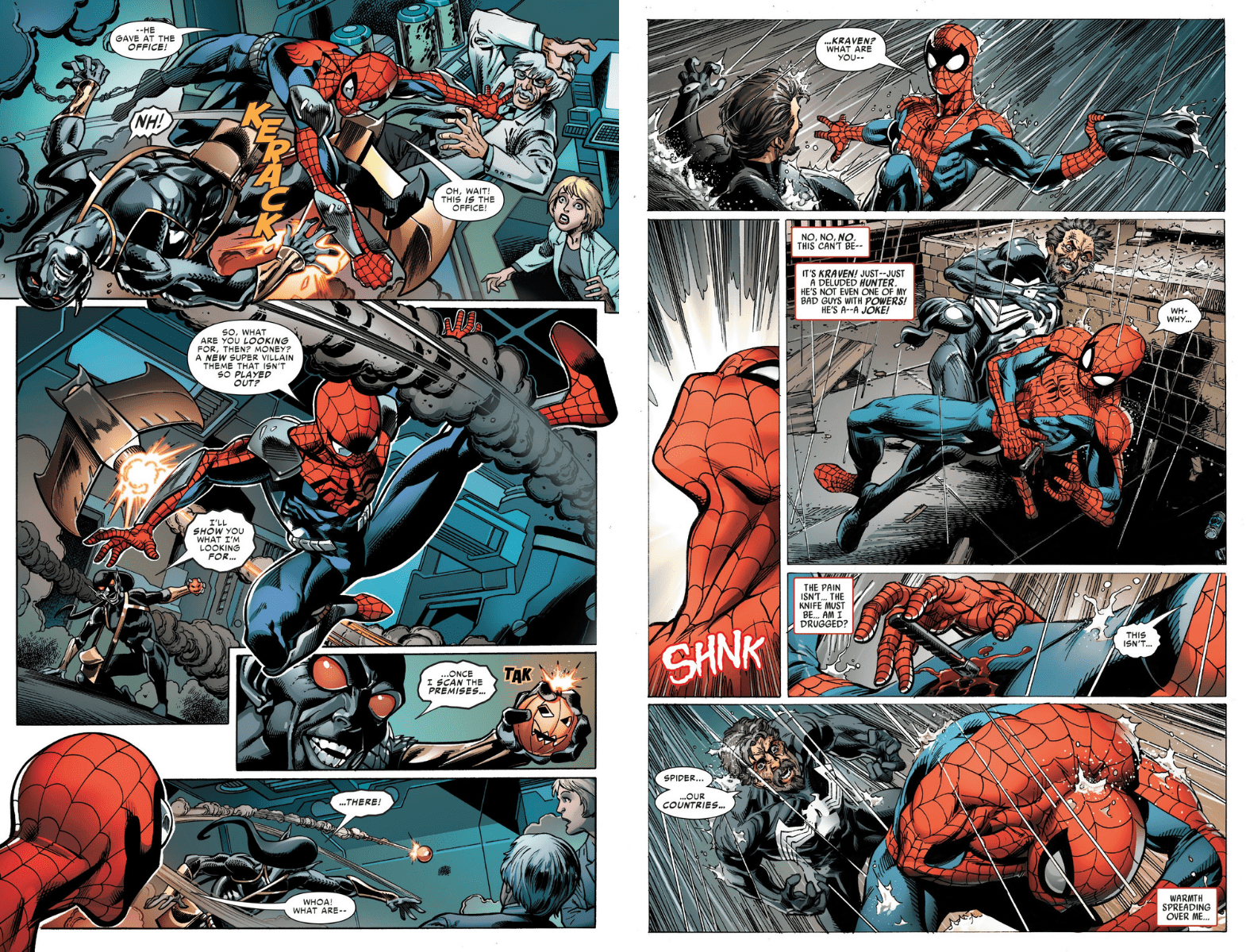 Chip Zdarsky is the hottest writer in the entire comic book industry, it’s no surprise he has two entries in the top three Marvel series.

When Marvel announced Zdarsky and artist Marco Checchetto were leading a new Daredevil series reader excitement was huge. So far the series has lived up to the hype and then some. Checchetto’s dark and gritty art style not only match Daredevil, they elevate the character and setting. He’s changed the costume to include MMA style hand wraps that emphasize Matt Murdoch is a street-level hero. Checchetto uses symbolism and changes artistic tone to enhance Zdarsky’s fantastic narrative.

Chip Zdarsky’s run picks up with Matt Murdoch recovering after a near-death experience. He’s lost a step and struggling to cope with his newly discovered limitations. Daredevil is always trying to reconcile his faith and his actions as a crime fighter. Most great Daredevil stories need to test his faith and bring him to an all-time low before he perseveres. Coming out stronger with renewed vigor. Zdarsky is doing just that with the first story arc. If Daredevil continues with the same level of quality. It will be the best comic book in the industry, period. 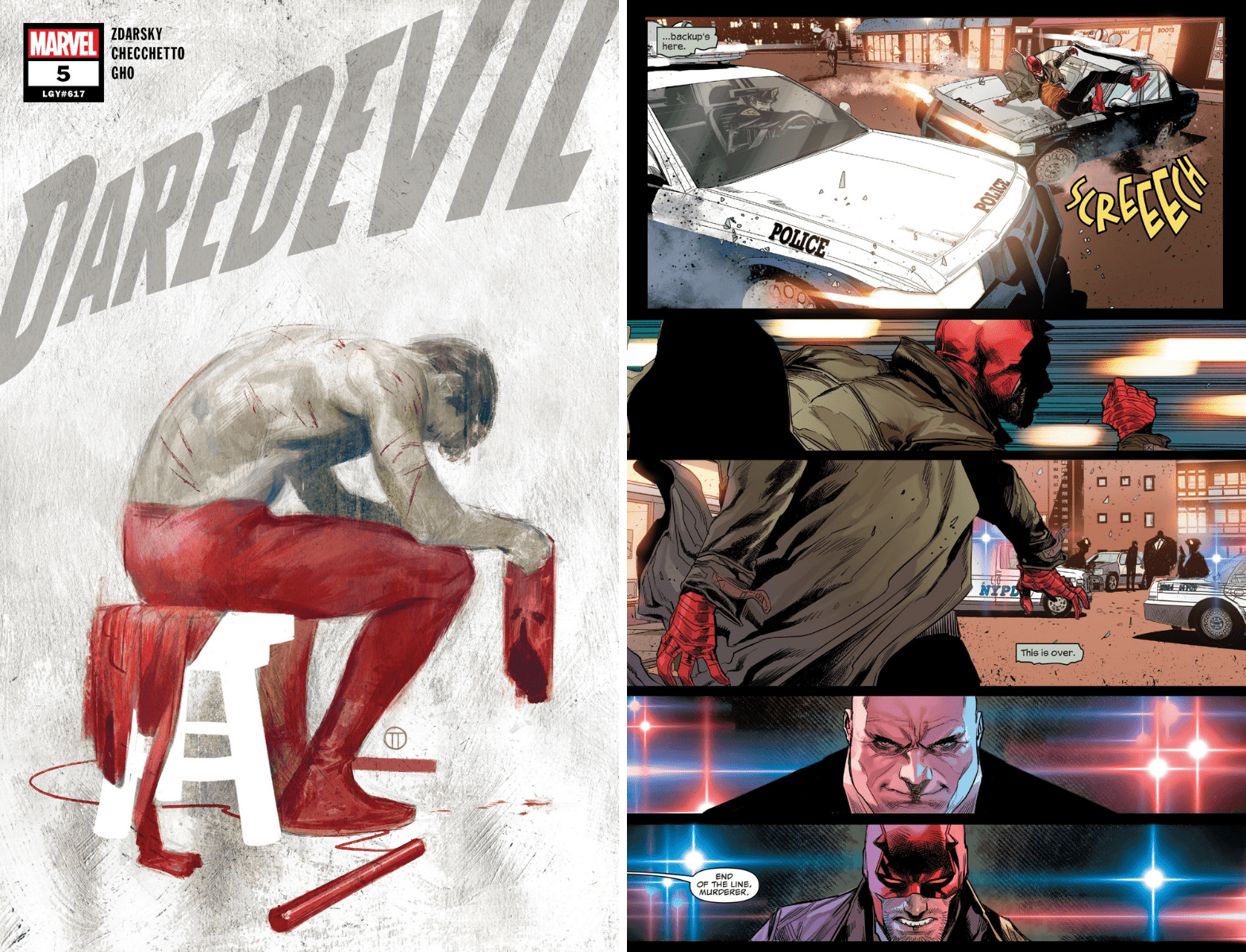 Marvel’s number one book is probably the best series in all of comics. Al Ewing and Joe Bennett team to revitalize a long suffering character in the number one Marvel series.

Immortal Hulk is the finest horror comic in the industry, bar none. Veteran horror artist Joe Bennett creates shocking, bone chilling comic book excellence every issue. His visual stylings are extremely intense and filled with amazing detail work especially facial expressions. Bennett uses several tricks such as orienting panel angles and reader perspective to ratchet up tensions. Grotesque, extremely frightening splash pages of Hulk are a signature of the series. The artwork by Joe Bennett and his team is absolutely first-rate.

Al Ewing has been in the industry for years but never had a story arc, let alone series to get fans really excited. That all changed when given the keys to the Hulk character. Ewing’s rejuvenated a fan base long ignored by Marvel brass. He and Joe Bennett redefined the Hulk character and further fleshed out its mythos. This all culminated in Immortal Hulk #8. The best comic issue since Zdarsky’s Spectacular Spider-Man #310. Hulk has been to hell and back. Bruce Banner has many multiple personalities the team are introducing to series readers. If you aren’t reading this new series you’re missing out on one of the two best comics in the industry. 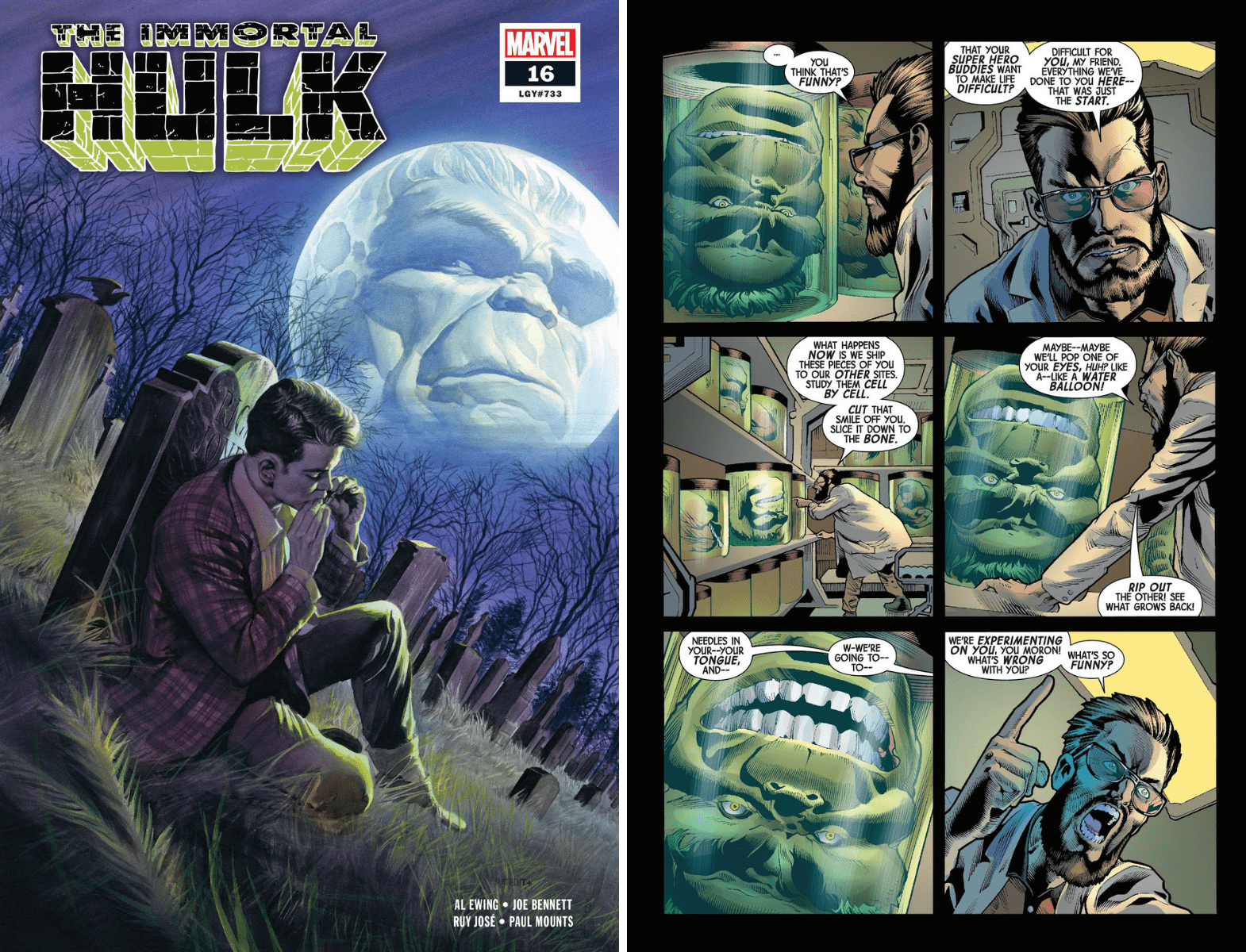 There you have it. My Marvel Comics Top 5 list. The publisher is extremely hot in their top three. In my estimation DC Comics only has 1 series (Hawkman) that belongs in the conversation with Spider-Man Life Story, Daredevil or Immortal Hulk. Marvel’s top is loaded with amazing artists Ryan Ottley, Ryan Stegman, Mark Bagley, Marco Checchetto and Joe Bennet. The stories are written by some of the hottest scribes in the industry; Donny Cates, Chip Zdarsky and Al Ewing.