I love “Best Of”-style lists. I used to make ’em all the time at my old blog, The Colossus of Rhodey (which no longer exists, but you can access it via the Internet Archive by searching under http://colossus.mu.nu). And I LOVE The Avengers, my favorite comics title after Iron Man (it helps that Shellhead is a founding member, natch).

As an older chap, my tastes may vary from many of the usual Earth’s Mightiest lists out there. I happen to think most contemporary comics absolutely suck, and as such nothing from the last 15 years or so will be included in what follows. This means you won’t see “Civil War.” I don’t think “CW” was all that bad; however, when you have to spread a story across innumerable titles and fundamentally alter the foundations of established characters for the sake of the story, count me out.

The time-traveling nemesis Kang is on a quest to find the so-called Celestial Madonna, and while this motivation gets a bit tedious at times, writer Steve Englehart’s sort-of conclusion in Giant-Size Avengers #2 may be the single-best issue in Avengers history (Dave Cockrum’s incredible art certainly helps that).

After managing to escape a revived Earth’s Mightiest, Kang immediately comes back after tricking, then capturing, his “other selves” Rama Tut and Immortus. But not before the latter conjures up “unliving” (there’s a difference between “dead” and “unliving,” you see) bad guys from history to do battle with the Avengers, who’ve been whisked to Kang’s own limbo.

Thor, Iron Man, Hawkeye, Vision, Swordsman and Mantis end up battling the Original Human Torch, Wonder Man, Zemo and even Frankenstein’s Monster. Englehart is at his peak here, and this arc leads to revelations about the Vision’s origins, as well as how the Kree and Skrulls came to hate one another. Covers Avengers #129 through #135 and Giant-Size Avengers #2-4.

The best Avengers story of the 1980s, Cap nemesis Baron Zemo (his son, actually) recruits various baddies — the reconstituted Masters of Evil — for a raid on Avengers Mansion. And he’s not fooling around: On his team are Goliath (formerly Power Man), the Grey Gargoyle, Titania, the Absorbing Man, and Tiger Shark. But writer Roger Stern expertly showcases the “weaker” Avengers’ prowess, especially when the Wasp and Ant-Man have to stop two of Zemo’s powerhouses from killing a barely alive Hercules in the hospital. Spans Avengers #270-277. 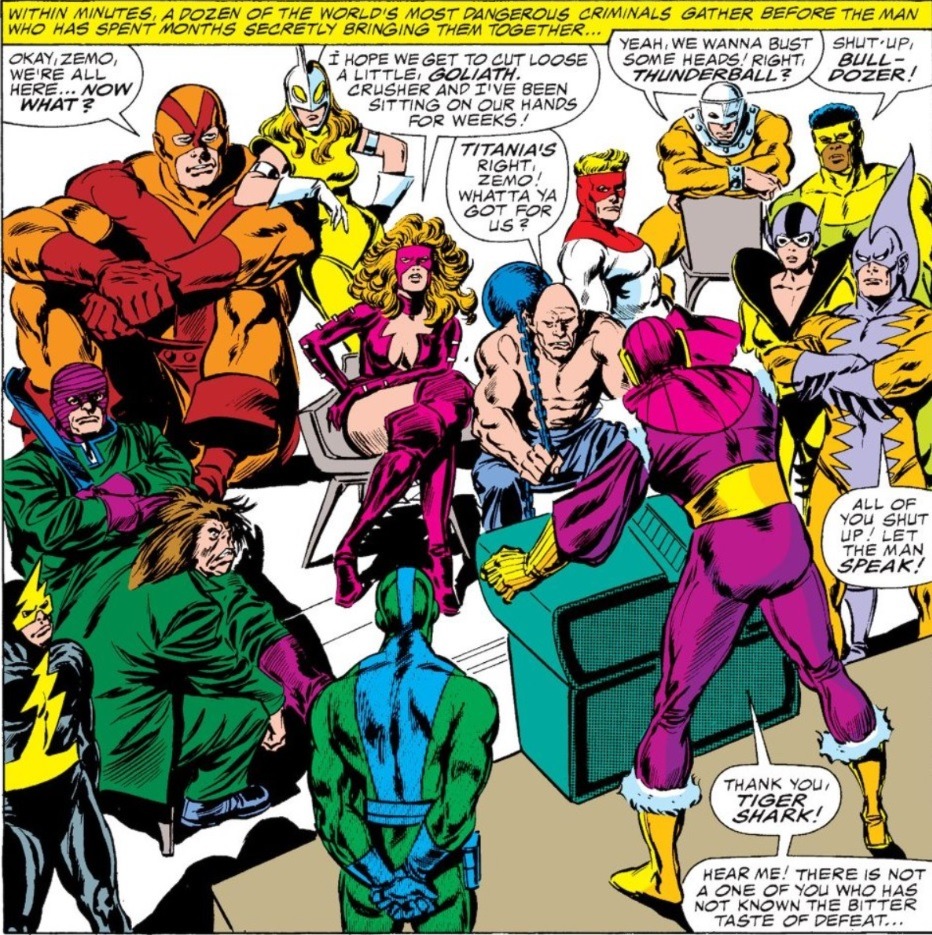 The Avengers first encountered this Justice League analogue back in Avengers #85-86, but in immediate post-Watergate America Steve Englehart brought them back as lackeys of a corporate-led alternate United States. If you’re old like me you’ll remember how iconic the cover of Avengers #141 was (yes, they mixed up the Squadron Supreme and Squadron Sinister), and is (it was turned into school supply folders and Trapper Keepers), but also how ridiculous it was that the story was interrupted by the “dreaded deadline doom” right smack in the middle (we had to wait two issues to see what happened when the Avengers were shunted to the Squadron’s world). Also, #141 is artist George Pérez’s Marvel debut. 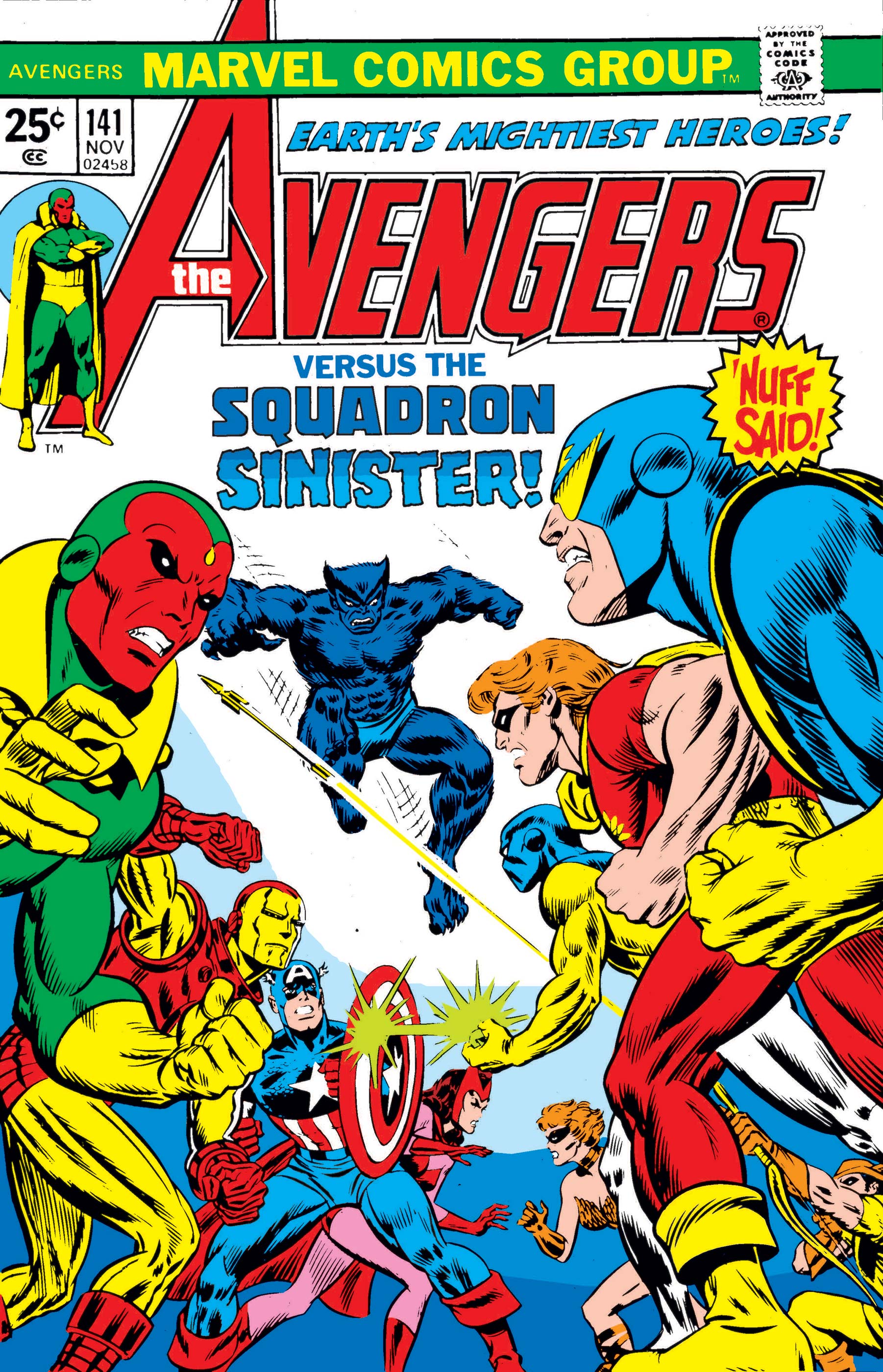 Englehart’s homage to the DC-style baddies is particularly showcased on Avengers #148’s opening splash page (a team line-up rundown) and by the various team team-ups throughout. Vision lovers will especially dig #147 as the Android Avenger single-handedly decks three of the Squadron, including Hyperion. See Avengers #141-144, #147-149.

You may be thinking “YOU SAID NO MODERN STUFF!!” but the first appearance of this alternate-universe Avengers debuted 18 years ago. It’s easy to rehash what the greats before you have done, and writer Mark Millar doesn’t do anything particularly spectacular here, but it’s Bryan Hitch’s cinematic approach to the art that really sends this series into the stratosphere. Hitch basically picks up here where he left off with DC’s The Authority.

Oh, and in case you can’t figure it out, the Chitauri are the Skrulls.

Kurt Busiek and George Pérez finally got this long-awaited story off the drawing board, and the wait was well worth it. Busiek is the undisputed master of continuity, and here (as he always does) he expertly weaves the histories of myriad Marvel and DC heroes into a compelling tale.

Did  I mention Kang yet? The Squadron Supreme? This usually unheralded Roy Thomas classic takes place right after the emotional Avengers #56 where the team makes use of Doc Doom’s time machine to travel back to World War II so that Cap can bury some personal demons. However, on the way back they get sidetracked — instead of Earth 616 (the Marvel Universe proper) the Avengers appear on an Earth where the original team had stayed together … and at the behest of a being called the Scarlet Centurion has neutralized every other hero and villain on the planet in the name of a “golden age.”

It’s Avenger vs. Avenger, but the team we know is hopelessly outmatched in terms of raw power — Cap, Hawkeye and Black Panther against Thor, Hulk and Iron Man?? D’OH!!!

You may know that the Centurion is yet another incarnation of Kang the Conqueror, and on Earth-S, homeworld of the Squadron Supreme, he is that team’s time-traveling itch they can’t scratch! (for that, see the Squadron Supreme Limited Series #1-12.)

This intro (Avengers #57) of what would become an Avengers stalwart is beautifully drawn by the late, great John Buscema, and is the dawn of the vile evil of robot Ultron (in this case, Ultron-5). In that regard, writer Roy Thomas sets the stage for one of the Avengers’ deadliest villains, who eternally haunts founding member Hank Pym, but also is (thankfully) eternally opposed by his offspring. 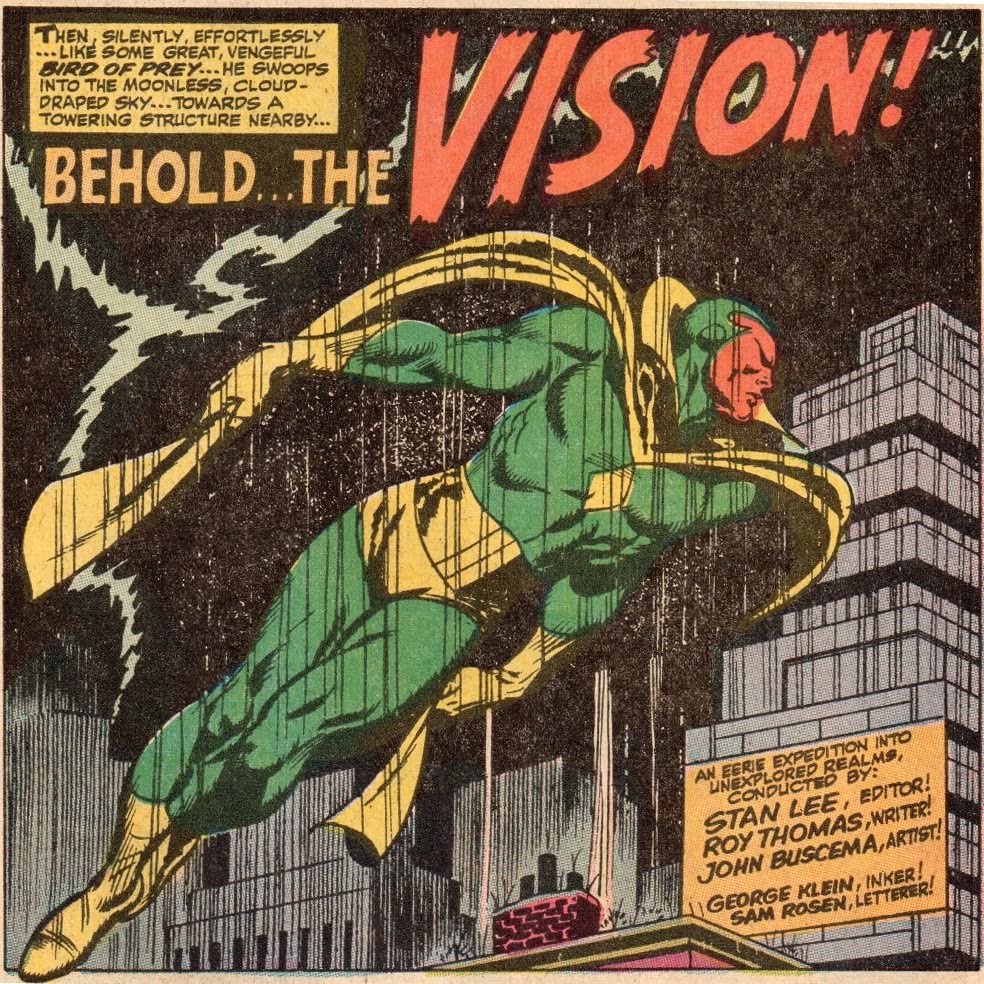 Avengers #58 features a classic, Cap-induced evaluation of the Vision’s powers, and the last splash page may be John Buscema’s single greatest piece of art ever: “Even an Android can cry.”

The evil Count reappears and tricks a trio of baddies — Power Man, the Whirlwind and the Living Laser — into “amplifying” their powers. What he really does is sap their abilities for his own use, and those powers are multiplied by a factor of 100! Nefaria then makes short work of the Avengers, but aging hero the Whizzer gives Nefaria something to think about: He may take over the world, but he’ll die in a decade or so, so ultimately … what’s the point?

The Count now has purpose — he’ll beat up Thor and make him surrender the secret to his immortality! It doesn’t exactly work out that way, however, as the Vision emerges from his repair tank (having been badly wounded against Ultron), flies up to a height of a few thousand feet, ups his density to the utmost, and then drops on Nefaria with devastating effect!

Jim Shooter and a young John Byrne are masterful in a mere three issues, and 20+ years later Kurt Busiek would reprise mega-powerful Nefaria in Avengers volume 3. 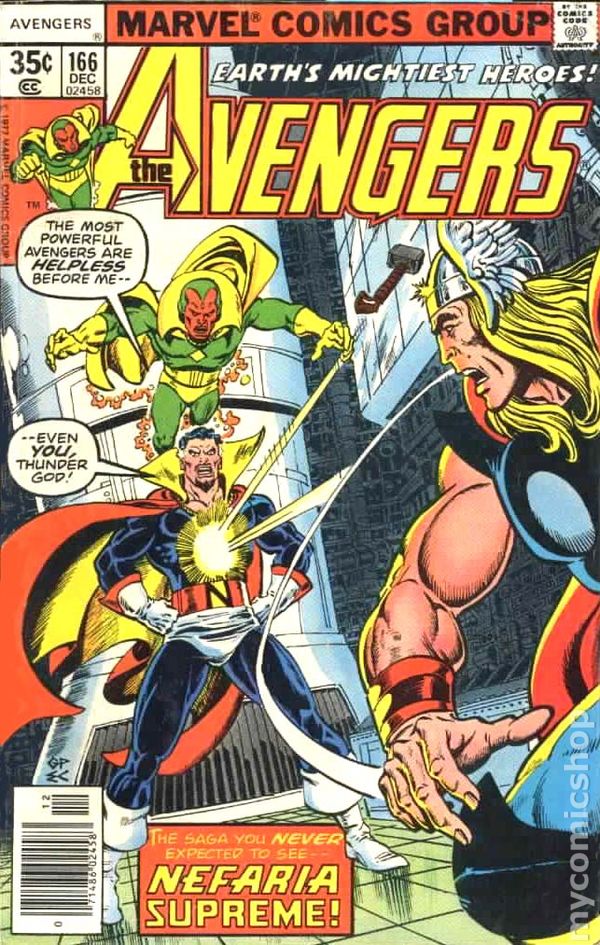 Speaking of Kurt Busiek (his assholish demeanor on social media notwithstanding), 20 years ago he put out some pretty amazing stories. Outside of the magnificent Marvels, there is none better than Avengers Forever. Granted, you have to be a pretty well-versed in Avengers lore to enjoy this 12-issue miniseries; Kurt takes a cue from Englehart’s aforementioned Giant-Size Avengers #2 (Kurt’s favorite Avengers issue ever) in the middle of series to engage in some perfectly executed explanations (and retcons) which clear up some confusion created by past writers’ ignoring/changing of continuity. 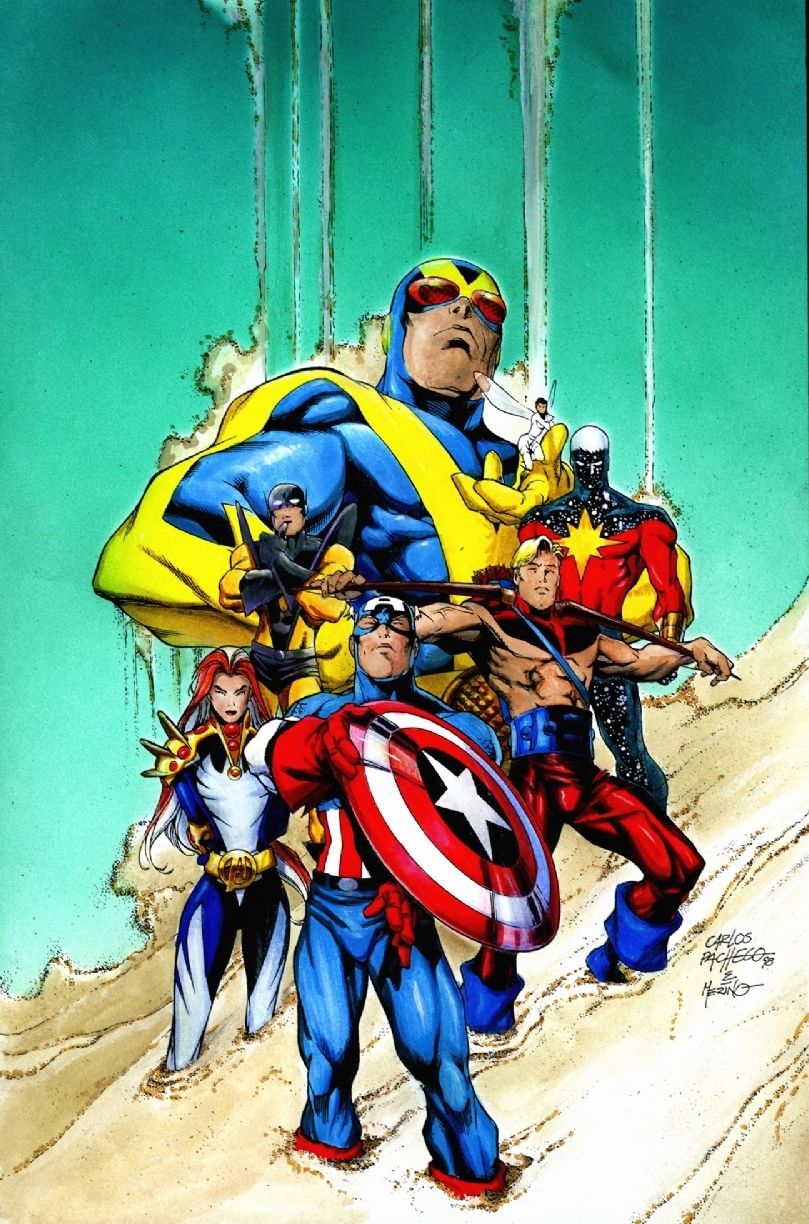 Like “Kang War II,” A.F. deals with the struggles between Immortus and Kang as several of Earth’s Mightiest are plucked from various time periods to battle the former. This includes the disillusioned, super-strength Captain America from right after the “Secret Empire” arc, Hawkeye from the around the time of the “Kree-Skrull War,” Yellowjacket from his first-ever appearance, and a then-future Songbird. Busiek masterfully intertwines even the most obscure Avengers references, such as the so-called “1950s Avengers” from What If? #9, and Killraven’s Martian-decimated Earth (which features an aged Black Panther).

And remember Rick Jones’ brief instance of omnipotent brain power from the Kree-Skrull War? It’s a central premise here. Of course, without a good artist to compliment Kurt’s script we might not even be talking about A.F.; thankfully, Carlos Pacheco’s pencils are insanely delicious.

So good it plays a central theme in our #2 entry above. In the 1983 two-issue reprint of this story, the preface states the Kree-Skrull War is so grand … that only comics could bring it to you! And it holds true — any movie to do this tale justice would have to be over three hours long, at the very least.

Beginning with Captain Marvel possibly destroying the Earth due to radiation contamination, writer Roy Thomas weaves into this story the Inhumans, SHIELD, the movie Fantastic Voyage and very early issues of the Fantastic Four. The arc features artist Neal Adams at his pinnacle, as well as bros John and Sal Buscema (also at the top of their game).

As the war rages, the Kree want their Earth-spawned Inhumans to join them in the effort. With the assistance of the Avengers, the warriors from Hala are driven off … but not before Rick Jones is inexplicably nabbed by a Kree soldier to take back to the homeworld. This is all part of the captured-by-Ronan the Accuser Supreme Intelligence’s master plan! As the Avengers speed off in a Mjolnir-powered SHIELD spacecraft in search of the captured Quicksilver, Scarlet Witch and Rick Jones, Adams treats us to a space battle scene as good as anything in Star Wars six years before the monster classic even hit theaters. There are those who complain that the Supreme Intelligence’s releasing of Jones’ latent “Destiny Force” (it’s not called this in the story; Busiek coins the term later in Avengers Forever) is a lame deus ex machina; however, one can’t complain too much as its first manifestation conjures up superheroes from Marvel/Timely’s early days to take on Ronan’s foot soldiers! 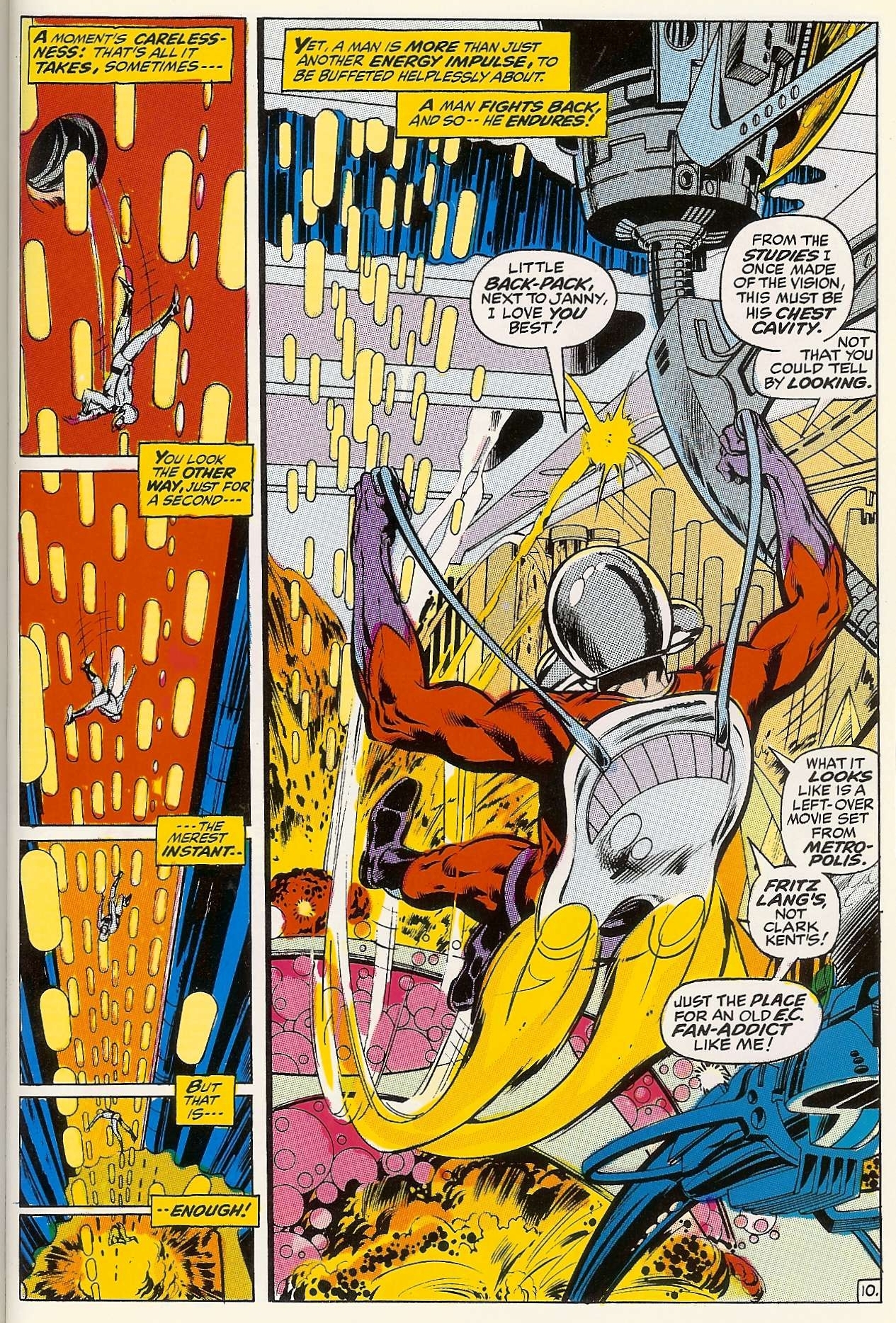 I’d be remiss if I didn’t elaborate on the Fantastic Voyage and Fantastic Four references: One of the greatest set of panels in all comicdom is Adams’ insanely scrumptious take on the Vision’s inner workings, and Ant-Man’s efforts to figure out what ails the Android Avenger. What ailed him was that he was zapped by a trio of cattle at a farm — cattle who turned out to be the original Skrulls from Fantastic Four #2!

Comic book storytelling simply gets no better than this.

‘Saga’ is Back at Image Comics, Along with Its Far-Left Politics