On July 1, DC is launching a new line of 100-Page Giants featuring all-new tales along with reprinted material. But these comics won’t be found in your local comic shops right away, unless they’re in the back-issue bins in a few months. Nope. These comics will only be available in Walmart stores in the U.S., meaning that these comics will skip over the direct market comic book shops and reportedly even the digital market.

The books will be priced at $4.99 and available at over 3,000 Walmart locations. Beginning in August, the Superman Giant and Justice League of America Giant titles will arrive in week one of each month, with the second pair, Batman and Teen Titans, arriving approximately two weeks later.

DC is starting this new line with four books — Superman Giant, Batman Giant, Justice League of America Giant, and Teen Titans Giant. With Justice League of America Giant centering on their Wonder Woman for the first few issues. Brian Michael Bendis will be working on an all-new Batman story and Tom King is working on a new Superman tale as well. These stories will each run for one year.

Other writers providing new stories are such talent as Jimmy Palmiotti, Dan Jurgens, and Tim Seeley. With Jurgens launch the Teen Titans Giant book with a six-issue story arc. 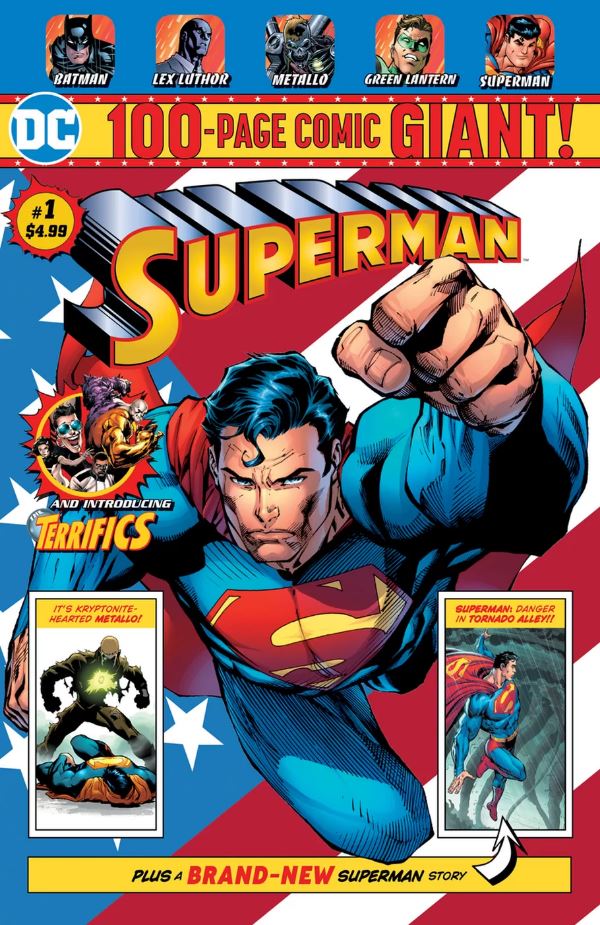 SUPERMAN GIANT #1 features chapter one of the two-part “Endurance,” an original story written by Jimmy Palmiotti (HARLEY QUINN, ACTION COMICS) with art by Tom Derenick (HARLEY QUINN, CYBORG, BATMAN/SUPERMAN). The Daily Planet sends Clark Kent to Tornado Alley to do a story on the area, but when the storm hits, it turns out that this mild-mannered reporter is more helpful as Superman.

THE TERRIFICS #1­ (2018) – From this year’s New Age of Heroes and born of the events of DC’s hit series DARK NIGHTS: METAL. Mr. Terrific, Metamorpho, Plastic Man and Phantom Girl are a team of heroes bound together by fate and united by the spirit of exploration and discovery. Together these heroes plumb the depths of the fantastic to learn what it means to become family.

GREEN LANTERN #1 (2005) – Written by best-selling writer Geoff Johns with art by Ethan Van Sciver and Carlos Pacheco, this first chapter launches the fan-favorite three-part story “No Fear,” in which Hal Jordan makes his return to the DC Universe as the Green Lantern, casting the light of justice on the darkest corners of Space Sector 2814.

SUPERMAN/BATMAN #1 (2003) – The iconic fan-favorite story arc, “Public Enemies,” returns, courtesy of writer Jeph Loeb, with artists Ed McGuinness and Tim Sale. Batman and Superman unite when President Lex Luthor accuses the Man of Steel of a crime against humanity and assembles a top-secret team of powerhouse heroes to bring Superman in by any means necessary.

September’s SUPERMAN GIANT #3 features Eisner Award-winning writer Tom King’s first return to the Man of Steel since his poignant and heartfelt tribute story, “For Tomorrow,” in the pages of ACTION COMICS #1000. Together with DC Master Class artist Andy Kubert, this powerhouse team will take readers on a new 12-part adventure titled “Up in the Sky!” When a little girl is kidnapped and taken from Earth, Superman embarks on a galaxy-spanning mission to find the perpetrators…but has
to decide what lengths he will go to in order to save one life! 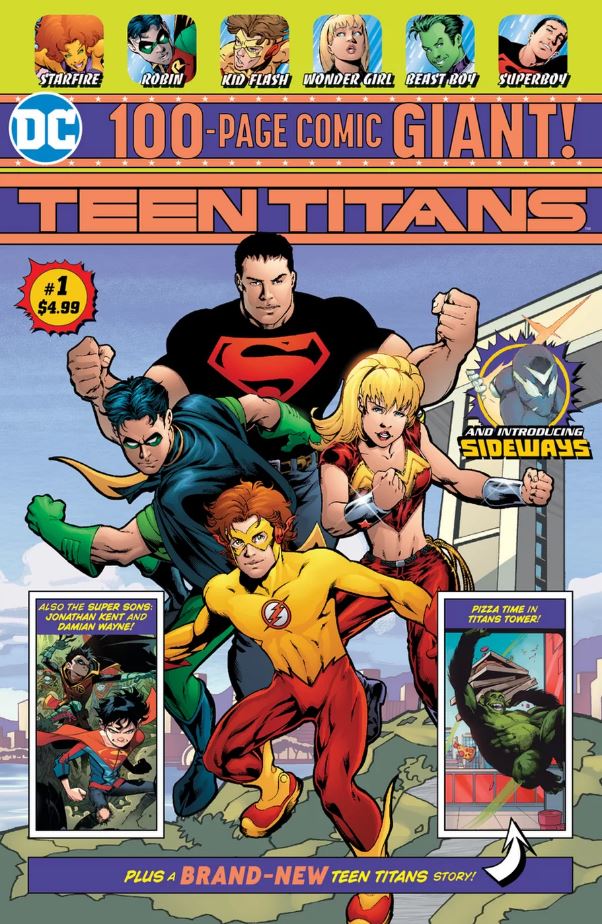 TEEN TITANS GIANT #1
In this original six-part Teen Titans story by Dan Jurgens with art by Scot Eaton, Wayne Faucher and Jim Charalampidis, the Teen Titans’ pizza dinner is interrupted by the introduction of a new villain, the Disruptor. Teaming up with the Fearsome Five and working as an agent of H.I.V.E., he had one mission: kill the Teen Titans! The battle spills onto the streets of San Francisco, putting its citizens at risk, while H.I.V.E. uses this distraction to begin their plan for world conquest!

SUPER SONS #1 (2017) – From DC’s smash-hit Rebirth event, writer Peter J. Tomasi and artist Jorge Jimenez reintroduce the sons of Superman and Batman, Jonathan Kent and Damian Wayne, in part one of “When I Grow Up.” As Robin, Damian’s more than ready to take his place at the heroes’ table and has zero plans to wait his turn. And he’s dragging Superman’s son along for the trip, whether Jon likes it or not!

SIDEWAYS #1 (2018) – Also from the New Age of Heroes, this story written by Dan DiDio with art by Kenneth Rocafort introduces fans to high schooler Derek James who, during the events of DARK NIGHTS: METAL, has acquired powers from the Dark Multiverse and stepped into the role of superhero! But when cracks begin to appear in the space-time continuum, he soon learns that with that much power comes even greater liability!

TEEN TITANS #1 (2003) – Written by best-selling author Geoff Johns with art by Mike McKone. Cyborg, Raven, Starfire and Beast Boy welcome in a new roster of young heroes to train to defend humanity—Wonder Girl, Impulse and a Superboy who’s been cloned from Superman’s DNA! 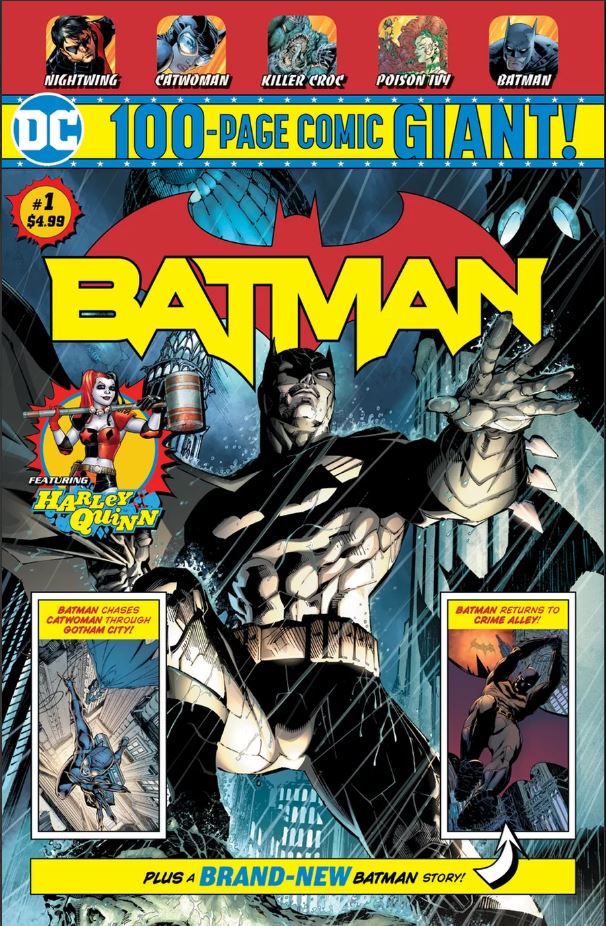 Batman is on the case of a missing girl in “One More Chance,” an all-new story by writer Jimmy Palmiotti and artist Patrick “Patch” Zircher. Batman is the world’s greatest detective, but what happens when the trail in his newest case leads him back to a place from his past that he never expected to revisit?

BATMAN #608 (2002) – Written by Jeph Loeb with art by comics icon Jim Lee, issue #608 kicks off “Batman: Hush,” one of the most popular storylines in the Dark Knight’s fabled history. When Batman sets out to unmask the mystery character wreaking havoc in his life, he teams up with an unexpected ally (Catwoman) and finds himself facing off against not only his deadliest foes, but some of the toughest characters in the DC Universe, including Poison Ivy, Killer Croc and even Superman!

NIGHTWING #1 (2011) – From DC’s New 52, this story by writer Kyle Higgins and artist Eddy Barrows debuted a new look for Dick Grayson as he dives into a tale of murder, mystery and superhuman evil against the backdrop of Haley’s Circus, the place that started him on his path from acrobat to orphan to sidekick and ultimately superhero!

HARLEY QUINN #1 (2011) – Also from the New 52, writer Jimmy Palmiotti and artist Amanda Conner break Harley Quinn out of The Joker’s shadow with all the force of a giant mallet!

Beginning with BATMAN GIANT #3 in September, superstar writer Brian Michael Bendis makes his DC debut on the Dark Knight with a 12-part story, “Universe.” Batman’s run-in with the Riddler leads the Caped Crusader into a mystery that spans the globe! 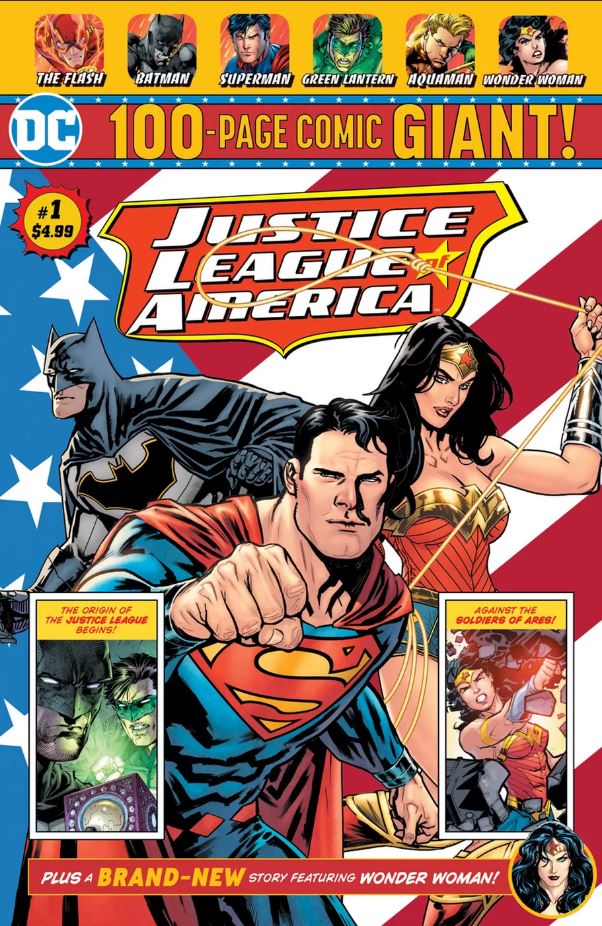 Justice League member Wonder Woman is spotlighted in “The Conversion,” an all-new story from NIGHTWING writer Tim Seeley and artists Rick Leonardi and Steve Buccellato. In this single-issue story, Wonder Woman comes face to face with Ares, god of war—who sees her as a promising new recruit!

JUSTICE LEAGUE #1 (2011) – From the incomparable team of writer Geoff Johns and artist Jim Lee comes this version of the League from the New 52. In this alternative spin on the union of Superman, Wonder Woman, Green Lantern, the Flash, Aquaman and Cyborg, superheroes are a strange and new phenomenon. The mysterious Batman discovers a dark evil that requires him to unite these reluctant heroes to protect Earth from a cosmic-level threat!

THE FLASH #1 (2011) – In this New 52 version of the Fastest Man Alive, writer Brian Buccellato and artist Francis Manapul introduce Barry Allen to a villain who not only can be everywhere at once, but is also a close friend of the Scarlet Speedster!

AQUAMAN #1 (2011) – Award-winning writer Geoff Johns and dynamic artist Ivan Reis team up on this story from the New 52! Aquaman has given up the throne of Atlantis, but the sea still has plans for Arthur Curry as a broken race of undersea creatures, the Trench, emerges from the ocean depths, bent on destroying the surface world!

In issue #2, Seeley teams up with artists Felipe Watanabe and Chris Sotomayor on “Mother’s Day,” a stand-alone story where Wonder Woman returns to Paradise Island for the first time since her exile, only to find that the Amazons – and Queen Hippolyta – have been abducted by Echidna, the mythological Mother of Monsters, with a brood of unstoppable beasts as children!

Issue #3 begins another original 12-part Wonder Woman story by HARLEY QUINN co-writers Amanda Conner and Jimmy Palmiotti called “Come Back to Me.” When Steve Trevor’s plane crashes on an island outside of time itself, it’s up to Wonder Woman to rescue him from this mysterious land, full of monsters, dinosaurs and some very surprising citizens.

I think this is a great idea to get possibly target a demo that isn’t going into comic book shops or ordering comics from online retailers. Marvel did something similar to this last year with Archie Comics in co-publishing digest sized reprint collections. Marvel also comes out with $1 priced reprint issues of key comics under their True Believers line. This could be a great deal for both DC and Walmart, not to mention the chance to bring in new readers. While it’s not quite the spinner rack at the 7-11, it may reach an audience that’s not being served, and hopefully the included reprinted material will be enticing enough for novice comic readers that they will want to seek the tpbs or back-issues out. We all know back issue sales are in many ways more lucrative to comic shops than new issues.

Comics Beat dug a little deeper and found out a few more details about how this is being pushed behind the scenes and are reporting the following:

There will only be 12 pages of new content per issue (with 100 pages and 3 reprints, that leaves plenty of space for ads).

They’re not planning on digital editions, not even of the new material (though one supposes that could always change).

This (is) 100% being spun as general audience outreach – and that may well be straight up truth, not merely spin. Word is they’ll be highlighting and pushing the Comic Shop Locator in advertisement in the comics. So effectively, this is combination of 1) getting a newsstand presence back and 2) an attempt to advertise the rest of the line to that potential newsstand audience.

Again, we hope that is the deal because comics needs to reach more eyes. However, not everyone in the comics business felt as upbeat about the news.

Why do you feel it needs the exclusive content? That’s what seems to annoy most comic retailers I have spoken to. Isn’t that taking existing customers – and creator time and talent – out of the comic shop?

Will speculators pick over these on July 1? Who knows, but you can use Walmart.com’s online store finder to locate the store in your area that has DC’s GIANT 100-Page comic books.

IDW Dumps Diamond, But Will Their Comics Ever Improve?

Regarding the Sudden Political Correctness of Larry Hama