Superman Comes Out: Why So Many DC Superheroes are Suddenly Gay

In case you haven’t heard, Jonathan Kent, the son of Lois Lane and Clark Kent (aka Superman), has been outed as bisexual. Some people say “gay,” and technically I suppose that’s correct since he hasn’t been with any girls so far. And, in case you were wondering whether he was just experimenting with his sexuality or was certain he was bi, DC Comics confirmed it. 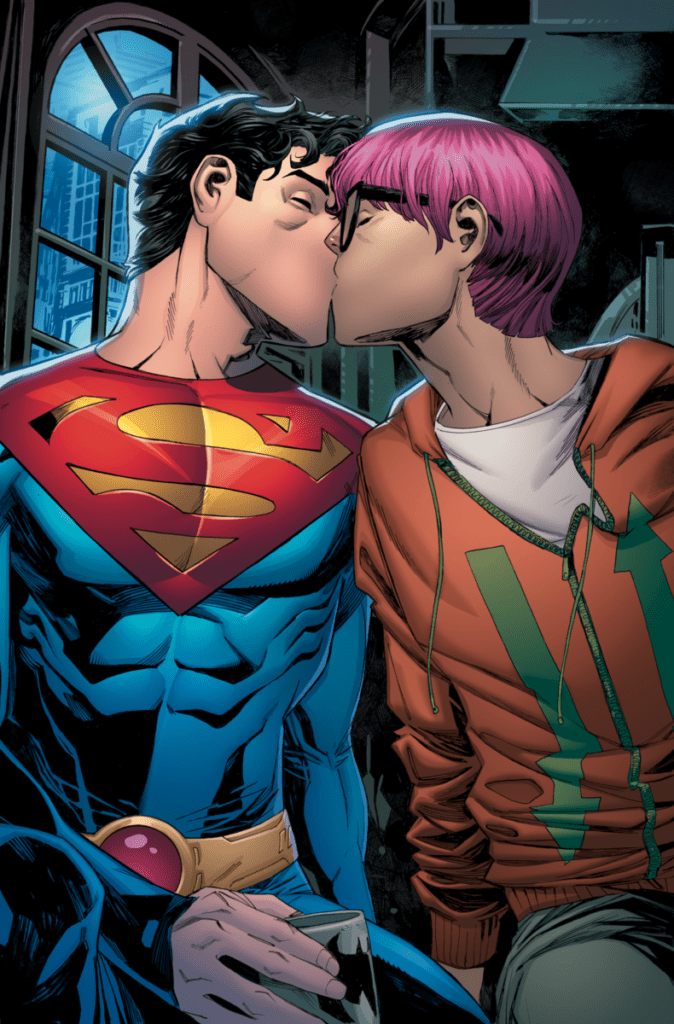 On November 9th, the life of Jon Kent, the Superman of Earth and son of Clark Kent and Lois Lane, takes a bold new direction.

“I’ve always said everyone needs heroes and everyone deserves to see themselves in their heroes and I’m very grateful DC and Warner Bros. share this idea,” said writer Tom Taylor. “Superman’s symbol has always stood for hope, for truth and for justice. Today, that symbol represents something more. Today, more people can see themselves in the most powerful superhero in comics.”

Just like his father before him, Jon Kent has fallen for a reporter. After initially striking up a friendship with reporter Jay Nakamura, he and Jon become romantically involved in the pages of SUPERMAN: SON OF KAL-EL #5 from writer Tom Taylor (DARK KNIGHTS OF STEEL) and artist John Timms (HARLEY QUINN). Following a scene where Superman mentally and physically burns out from trying to save everyone that he can, Jay is there to care for the Man of Steel.

There’s really nothing “bold” about this. It’s purely another act of the familiar, cynical pandering that DC has unfortunately begun to become known for, which should be obvious once you realize that the announcement dropped today, which just happens to be National Coming Out Day. This is actually old news if you’ve been reading Bleeding Fool for the last couple of months.

Writer Tom Taylor told IGN that he’s had queer characters and storylines rejected by the comics industry over the years, so when he was asked to write a new issue of “Superman,” he decided to make the Man of Steel a member of the LGBTQ+ community.

“I knew replacing Clark with another straight white savior could be a real opportunity missed,” Taylor said. “I’ve always said everyone needs heroes and everyone deserves to see themselves in their heroes. Today, Superman, the strongest superhero on the planet, is coming out.”

What a joke this guy is. His big idea was taking another established character and changing them to fit his political whims. But this shouldn’t be news to our readers. We’ve reported on this already, and in fact, Ethan Van Sciver, the creator of Cyberfrog broke this news months ago, and it’s part of the reason many creatives left DC.

Clark Kent is going away. Jonathan Kent is taking over, and they’re announcing he’s gay. #SupermanIsGay

If it’s not obvious to you that this is just pandering, you may have missed how in August DC Comics proudly announced that former Batman side-kick Tim Drake was coming out as bisexual. The month prior, DC Comics celebrated Pride Month with a commemorative (and poorly selling) issue that introduced the world to Justice League Queer, an ad-hoc team of LGBTQIA+ heroes formed by Gregorio de la Vega to fight off Eclipso when he attacked a pride parade. I’m not kidding. 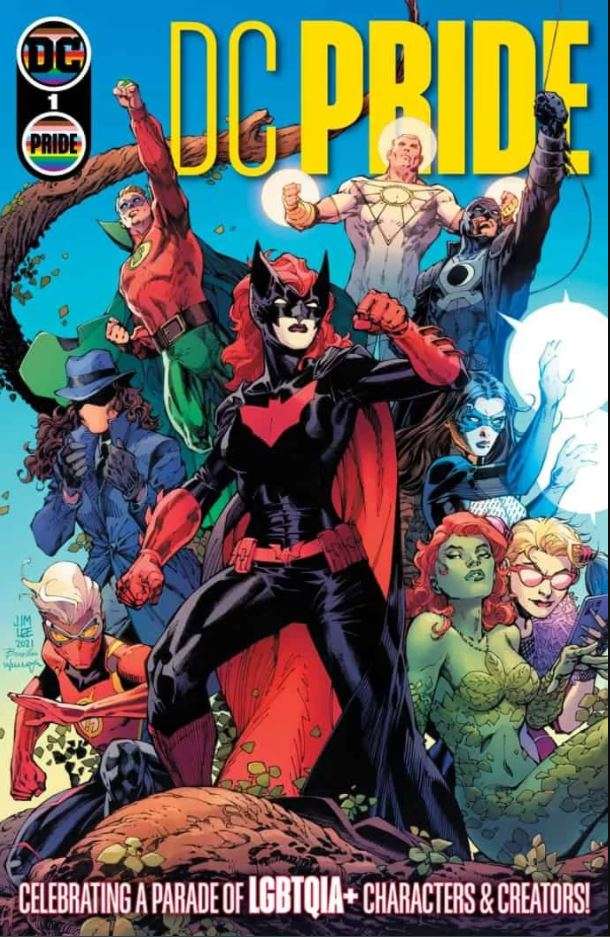 Clark Kent has been exiled to another planet, and will be out of the picture for a while, so technically, Jonathan Kent is DC Comics’ Superman in current continuity.

The trend of comics being used to make social statements, especially in the area of homosexuality, has been going on for a while, probably since the early 1990s. In the March 1992 issue of Marvel’s Alpha Flight comic book series, Northstar, decides to come out of the closet after seeing the ravaging effect that AIDS has had on an abandoned baby. But DC Comics was at the forefront of this, having introduced their first homosexual character — the Pied Piper — and included AIDS‑related themes in their Flash series in August 1991. Batwoman, initially described as “a ‘lipstick lesbian’ who moonlights as a crime fighter,” was later introduced in 2006.

Greg Rucka rebooted Wonder Woman in in Wonder Woman: Year One which highlighted her time on Themyscira, including her many relationships with other Amazon women. The comic also showed that Diana was polyamorous and one of the major plot threads of the series involved a romantic relationship between Etta Candy and Dr. Barbara Ann Minerva. 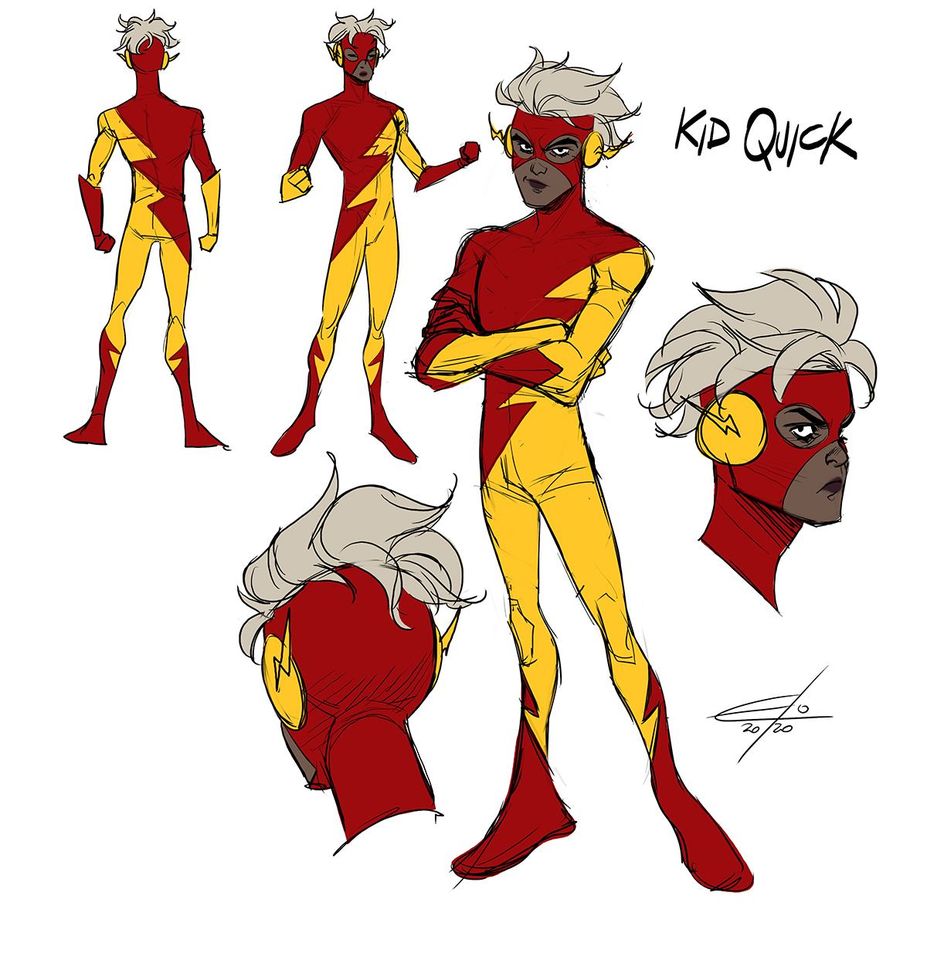 Since then we’ve gotten a gay Green Lantern, a gay Aquaman has taken over that title, and new we have a non-binary Flash. Maybe that Justice League Queer team is really going to become a reality after all? It’s still unclear why there has been such a recent push for several new, transitioned, and reimagined homosexual “superheroes” at DC (and Marvel Comics also), but I’m beginning to wonder if the ultimate goal is to get young people accustomed to seeing homosexual characters in a heroic light or in positions of authority. And if so, why? It’s becoming conspicuous that there are no longer any Christian-faith following superheroes. And is anyone expecting to see Batwoman suddenly find God and deciding to settle down with a straight man and start a family? That might cause a Twitter meltdown. I’m not suggesting they insert faith and politics into comics, I’d prefer they didn’t, but it’s been one-sided for too long.

We already know that creators in the animation and television realm have a similar agenda, and we’re well aware that DC Comics’ new leadership are hard left partisans. Marie Javins, the newest Editor-in-Chief is a very vocal big supporter of liberal causes. And Daniel Cherry III, their latest SVP, is a prominent LGBTQ activist, who recently had the following to say about the direction DC’s going to be taking moving forward: 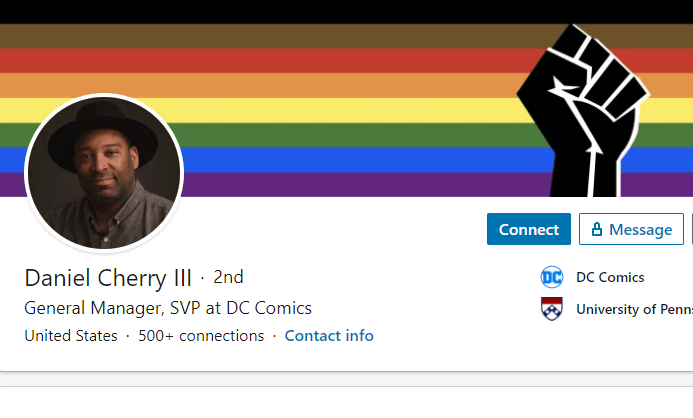 Oh, am I not supposed to suggest there’s an agenda they are trying to promote? And that there’s no attempt to indoctrinate or influence the readers?  There isn’t a problem with gay characters. If they are well-written and the stories happen organically, but they frequently are not. This is no longer about good stories. It’s agenda driven, and the numbers bear that out. Writer Jase Peeples recently noted that, “LGBT heroes and villains have been making the realm of superheroes a more colorful place for nearly 40 years. From gay martial arts masters and lesbian detectives to bad-ss bisexual antiheroes and transgender magicians, these are 65 characters that’ve left their mark and helped change the genre.” According to DC’s website, they have nearly 200 LGBTQ characters, although many of them are derivatives.

Pushing for more and more gay conversions really seems like an odd strategy when a only 5% of the US population identifies as LGBTQ. In other words, that’s a very, VERY small audience. Wouldn’t pandering to Christians, who make up at least two-thirds of the US population, be a better money-maker?  And yet DC doesn’t appear to have any Christian characters, or at least none they willfully promote. And it’s just happenstance that the first, major transgender superhero was announced in Marvel Comics for Disney. How many characters that espouse Christian beliefs or support conservative values are there again?

No agenda at all.

This gay conversion therapy of their mainline superheroes is the natural result of leadership changes at the comics publisher. And after this sales gimmick fails to generate the numbers they need to survive, what will the next “stunning and brave” sexuality conversion be? And how, if ever, can they walk this back? It’s true that Marvel may pulled off a walk-back with Northstar. After Wolverine killed him, I don’t think his sexuality has been mentioned since he came back. We’ll see how long that lasts.. Of course, Northstar isn’t on the same level as Superman.
(Editor: Northstar’s husband Kyle Jinadu has been appearing regularly in Maruauders and was in Marvel’s Voices: Pride comic)

Must be something in the water of the DC universe. Didn’t Tim Drake just do the same a few weeks ago? Anyone looking into this extraordinary phenomena and what might be causing it? https://t.co/AqTJEpvbVR

Several comics-related Youtube commenters weighed in on the news today:

This is a not a serious company
The Apathy of Superman and Making him Gay!
Superman Jon Kent officially comes out as bisexual
DC Comics set to destroy manga sales?! CONFIRMS Jon Kent Superman and Robin swing both ways!
Gay Superman Confirmed…Tom Taylor Gonna Tom Taylor

When was the last time there was a major comics storyline that was grabbing media headlines? Was Batman getting engaged to Catwoman? Or when Captain America was revealed to be a secret Nazi? And before that it was probably the Superman’s Dead storyline.

Some blue hair intern really though this book would “totally own the chuds” but it never works like that.

Remember the new woke warriors? Nobody bought it and it was cancelled before print. Every time the industry puts out a book like this it’s for retweets, not sales.

Marvel and DC will never be the same. Nowadays all the comic publishers can come up with is another gay character. Yawn.

No wonder manga is winning.